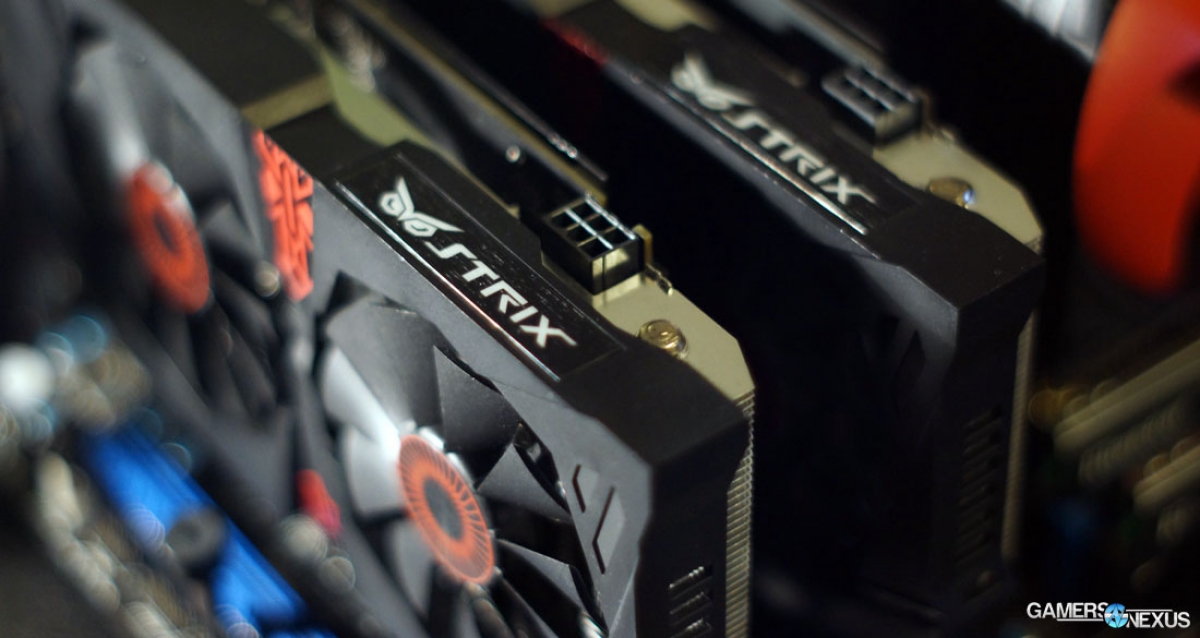 Our initial review of nVidia's new GTX 960 looked at ASUS' Strix model of the card, a $210 unit with a custom cooler and an emphasis on silence. We declared the GTX 960 a formidable competitor at the price range, remarking that its software-side support and power made it a primary choice for 1080p gaming. AMD's closest competitor is the R9 280 – a powerful alternative for users who don't mind a bit higher TDP and less frequent driver updates – priced closer to $170 after rebates.

As nVidia continues to push SLI as an actionable configuration, the question of SLI compatibility with video games is raised once again. Not all games adequately support SLI and, for this reason, we've historically recommend a single, more powerful GPU in opposition to two mid-range options in SLI.

Although the Strix operates at roughly the same 120W TDP as the reference device, ASUS implements a threshold requirement that prevents the fans from running unless demand exceeds 30W. This ensures that desktop operation and low-stress games don't activate the GPU fans, keeping noise levels low when the temperature is sustainable on passive cooling. There is no added threat to the longevity or health of the GPU at this operating range, even without fans running. If, for some reason – perhaps in the instance of a poorly-ventilated case – the GPU begins to heat-up beyond what is reasonable for 30W demand, the fans will once more reactivate until a safe temperature is established.

A Recap of Single 960 Performance

We already nVidia's new GTX 960 using the Strix in a previous posting, but will quickly recap the results here.

The end of our single GTX 960 review concluded that the card was very capable of 1080p gaming while maintaining ultra or very high settings. We also concluded that, given the memory bandwidth and memory interface limitations, the GTX 960 would not be a suitable standalone video card for gaming at resolutions greater than 1080p.

We tested resolutions of 2896x1629 with SLI GTX 960s, setting out to determine if the architecture can handle higher resolutions when in SLI.

The GTX 960s in SLI were tested using the latest NVIDIA GeForce drivers (347.52); all AMD devices were tested with the latest Catalyst Omega driver download. Tests were conducted using various games (listed below) and the synthetic 3D Mark benchmarking suite. FPS logging was performed with FRAPS and then analyzed with FRAFS; thermal and sensor monitoring was performed with GPU-Z.

All game and synthetic benchmarks were performed three times for parity, then averaged.

Game setting presets used during testing are identified by the title of the chart. Some settings are manually tweaked to allow for a more fair comparison between GPU vendors.

In FPS and game benchmark performance testing, we used the following titles:

The system was kept in a constant thermal environment (21C - 22C at all times) while under test. 2x4GB memory modules were kept overclocked at 2133MHz. All case fans were set to 100% speed and automated fan control settings were disabled for purposes of test consistency and thermal stability.

Tested at 2896x1629 (effectively 1600p) resolution, the two GTX 960s in SLI exhibited generally playable framerates that were satisfying as an end-user. Severe dips occurred at times, but were overall not too jarring. In Metro, GRID, and Battlefield, the 1% low dips all remained above 30 FPS. Only 0.1% of the time did the frame dips produce a visible spike in gameplay.

Far Cry 4 was more or less unplayable at the higher resolutions. With a 12FPS 1% low, the game exhibited severe tearing and microstutter with the GTX 960s in SLI. These issues were not present at lower resolutions, likely a memory bandwidth issue as we previously found that Far Cry 4 uses >3GB of VRAM. 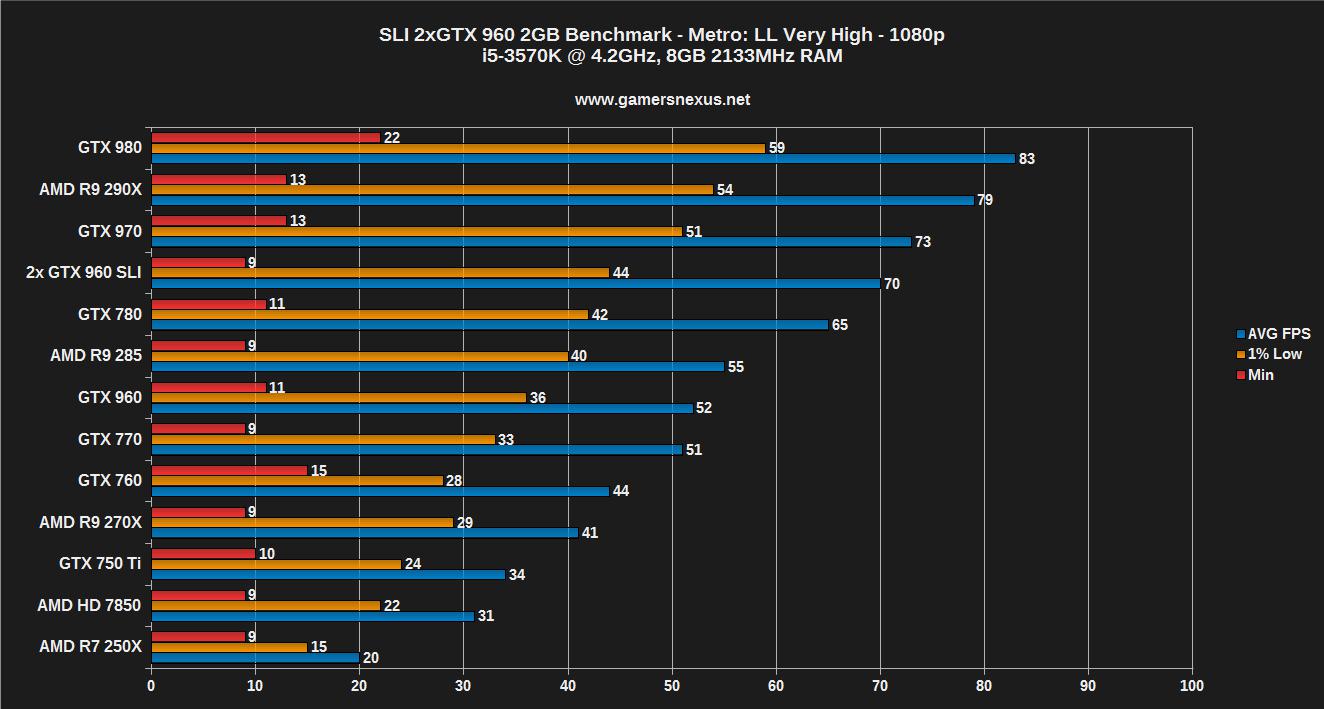 The GTX 960 is still the king of Metro: Last Light, with the R9 290X following closely behind. The 2xGTX 960s (about $420) produce nearly equivalent performance to a single GTX 970 (about $350), resulting in poor value for the SLI configuration. 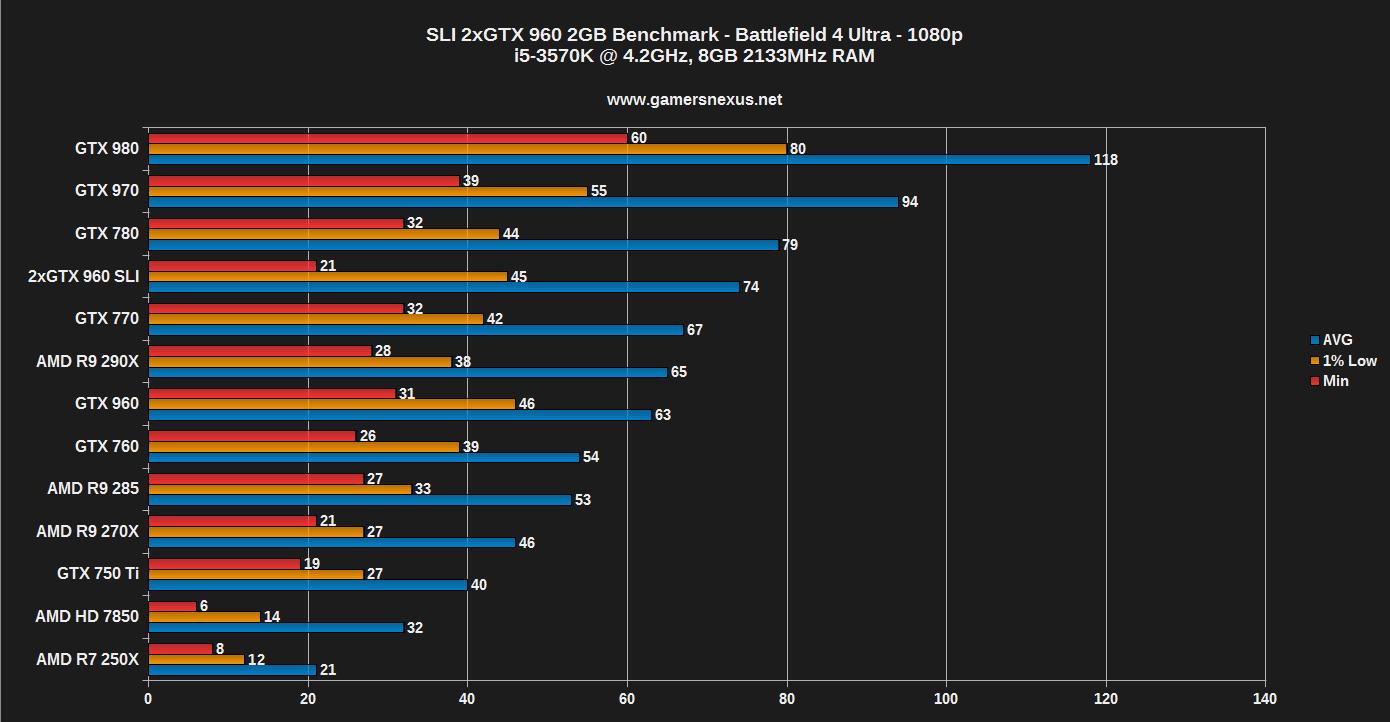 Battlefield 4 sees runaway performance with the GTX 980 and GTX 970, leaving SLI 960s and the 780 in the dust. From our testing, there's almost no value in a second GTX 960 for Battlefield 4. A single GTX 960 performs playably at >60FPS, so the 16% increase isn't worth an extra $210 – especially considering that a single card solution would outperform the two GTX 960s. 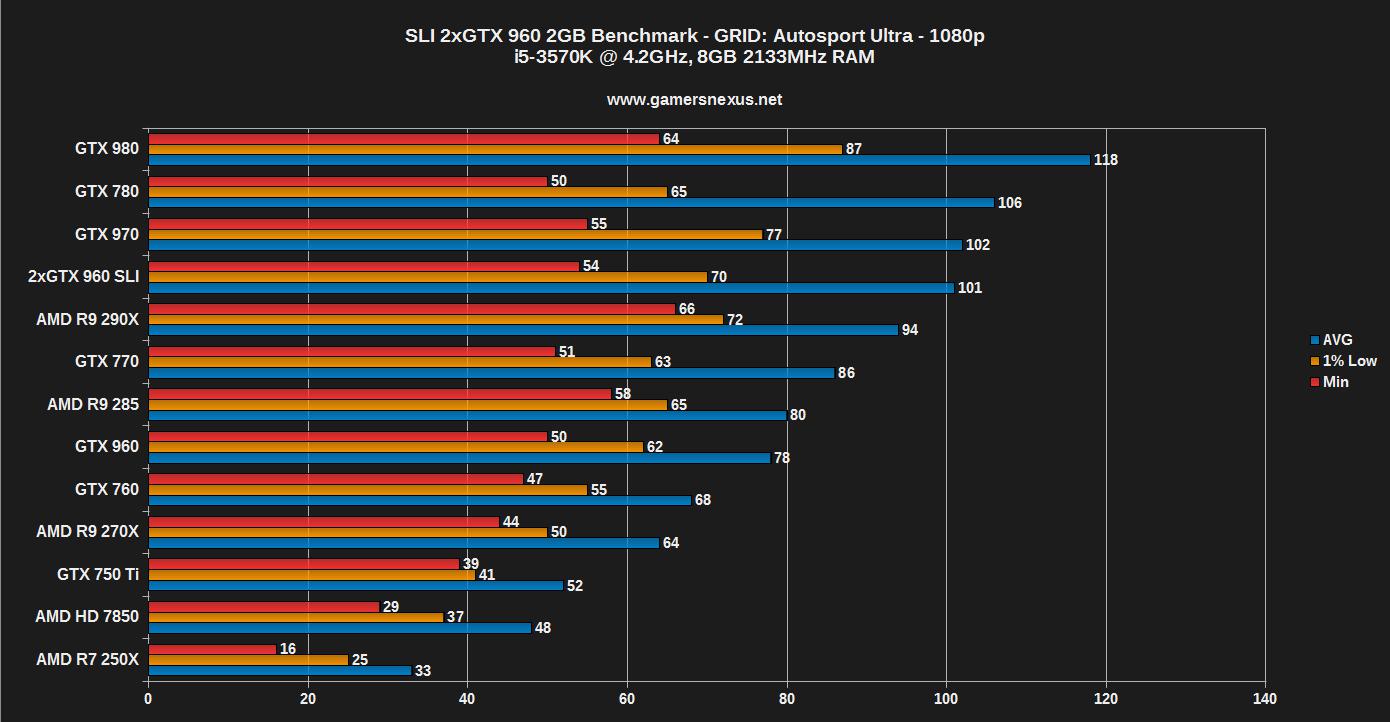 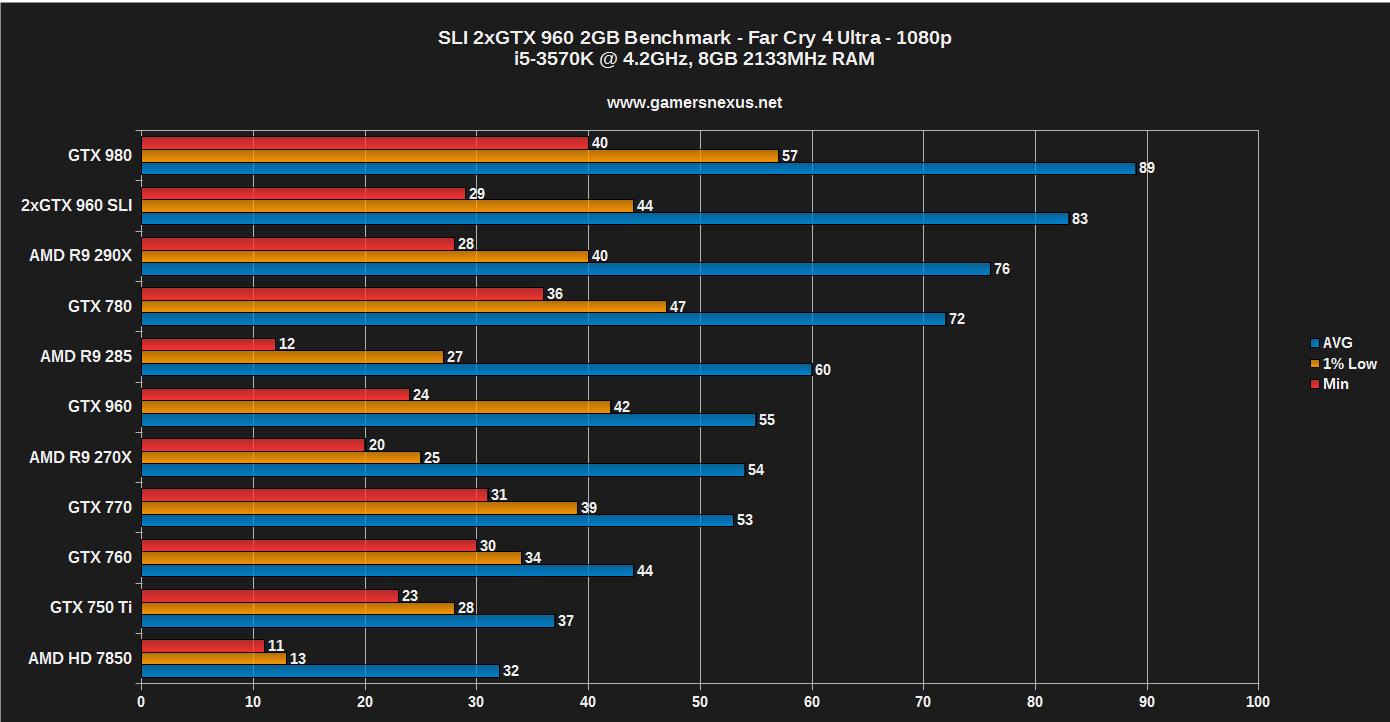 Far Cry 4 saw variable performance, but after normalizing a suite of several tests, we tracked an average of 83 FPS with the GTX 960s in SLI. We found that Far Cry took time to “catch up” to SLI, often exhibiting exceedingly low FPS upon initial load of the game. Once past this issue, the cards in SLI offer better value than some of our previous tests. The GTX 980 performs only marginally better than two GTX 960s for Far Cry 4, but would pull ahead at higher resolutions due to the wider memory interface.

Cutting to the chase here, ACU was entirely unplayable using SLI. This is almost certainly a fault of Ubisoft, who have historically proven an inability to optimize adequately for PC video cards. The game plays more reliably with a single GTX 960 than with two; using SLI, ACU exhibits tearing textures, microstuttering, and experience-ruining frame drops.

This further reinforces that multi-GPU solutions aren't receiving the support from titles that they require. If you wanted to play ACU with GTX 960s – at least, from our testing – you'd have to disable one of the cards and sacrifice power to achieve a playable experience. 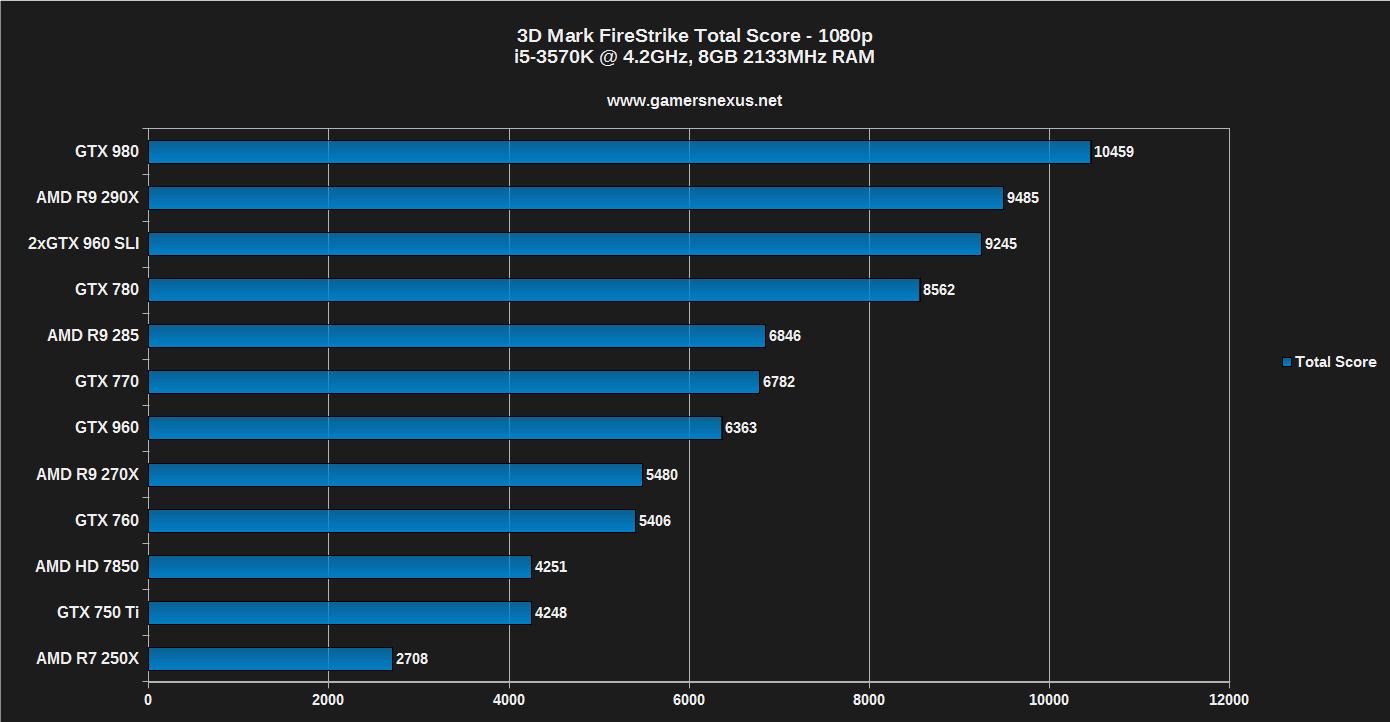 Synthetic tests unfortunately lack the GTX 970 (unavailable for the bench), but show that 2xGTX 960s rank close to the 290X and 780. All three of these configurations are blown away by a single GTX 980.

The framerate scores, however, favor the SLI configuration heavily. It isn't until combined testing (physics and gameplay) that the GTX 960s suffer, resulting in the above chart. 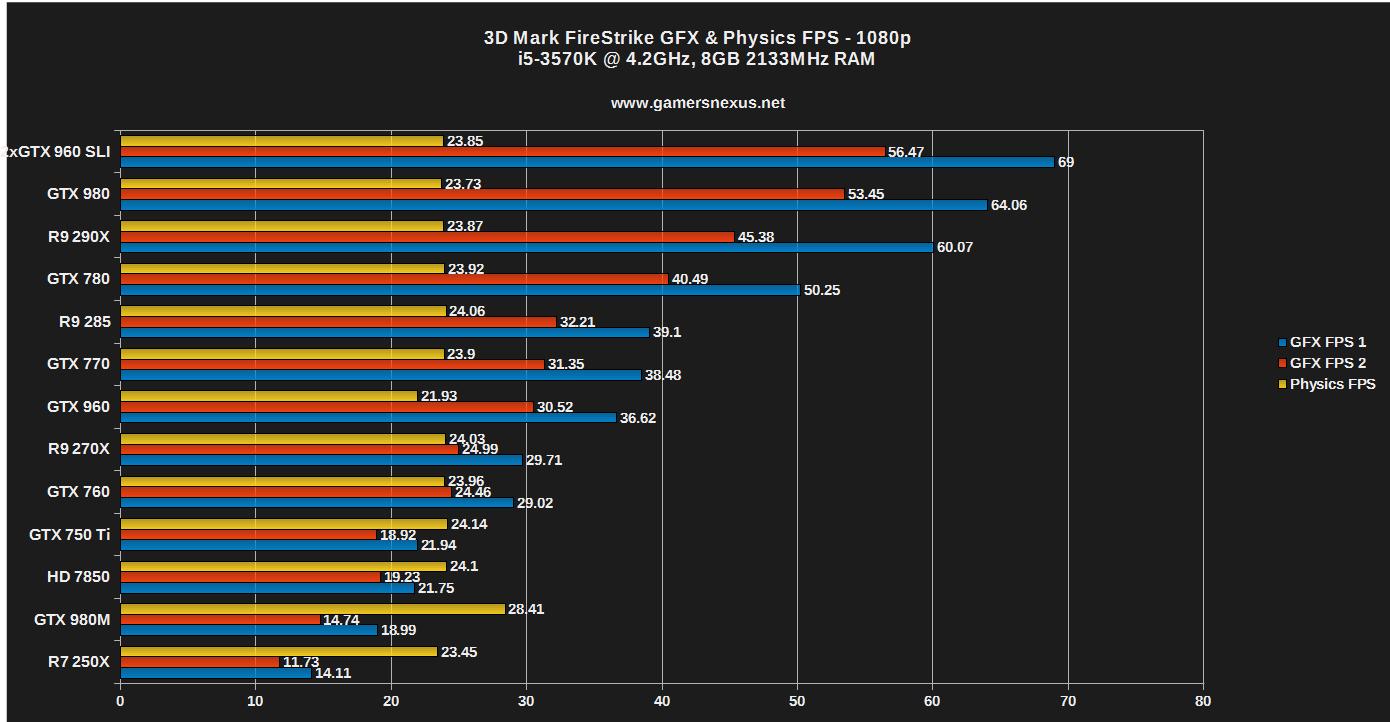 These tests ended up explanatory without charts. The GTX 960s retained the same thermal performance as in our initial review. Even in SLI, the primary video card received adequate airflow to not sacrifice thermal performance (the second GPU did not 'suffocate' the first).

Conclusion: Is SLI Worth it for GTX 960s? 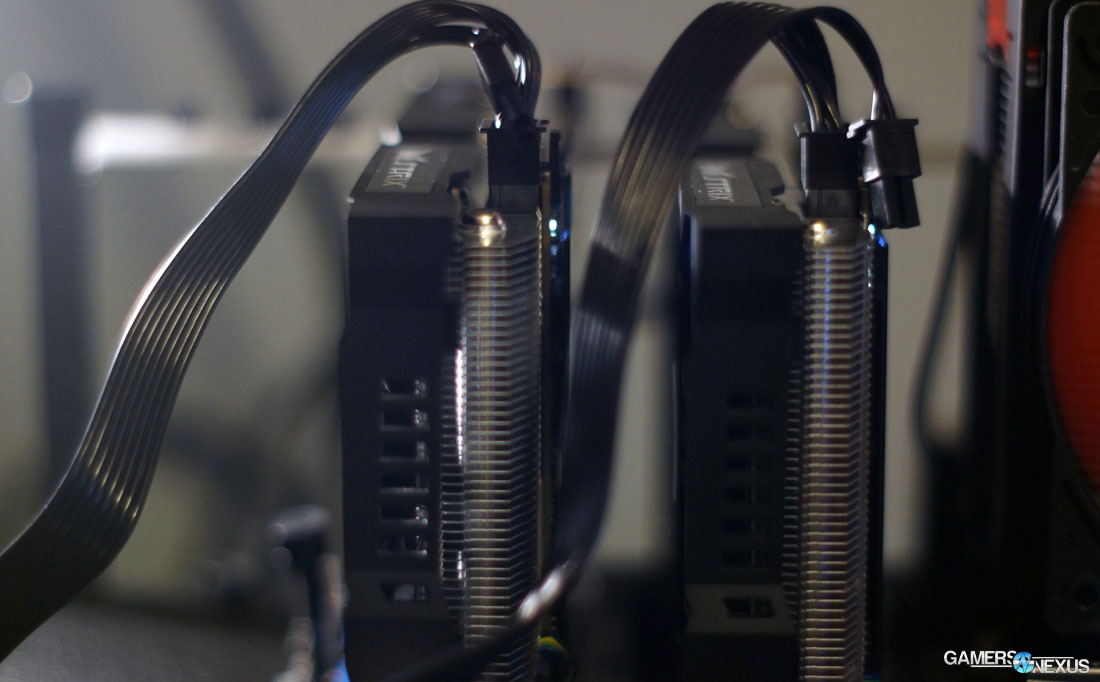 SLI performance and compatibility has drastically improved since its inception, but still struggles in some instances.

GTX 960s in SLI would be a questionable choice. If you're building a brand new machine, it still makes more sense to spend that budget (~$400+) on a single card solution than on two 960s. The value just isn't there. A single 970, 980, and R9 290X will almost always outperform SLI 960s, and are all in the same general price range.

The only justifiable reason for SLI GTX 960s would be if – a few years down the line – a GTX 960 user decides they'd like some additional power without buying a brand new card. Unfortunately, this argument often falls apart as cards are discontinued. This relegates the buyer to used devices or extremely overpriced new devices (demand is higher and production has stopped). Ultimately, unless you're buying a 960 today and another one in a year, it's tough to justify the purchase.

We can strongly recommend ASUS' GTX 960 Strix in a single card configuration; at $210, the value is tremendous for low-TDP, 1080p gaming systems with a high performance demand. AMD has nearby competition in the form of the R9 280 -- which very strongly competes against the 960 (and outperforms it, though with less software support) -- and R9 270X. As for SLI, it just doesn't make financial sense to invest in a second GTX 960 at this time.