Monitors aren’t always given the most thought beyond resolution and size, for many buyers. The fact is, though, that monitors are incredibly complex components. Attributes like response time, input lag, color reproduction, and viewing angles are all measurements that make a noticeable difference in how a monitor’s picture looks, but even for expert builders, such terms can be confusing; it doesn’t help that the TV & display industry has been plagued with marketing nonsense since the dawn of creation, ensuring that some attributes lose meaning over time.

Not only will our monitor hardware dictionary (which is scheduled to be released soon) help provide an irreplaceable resource for those confused, this article will detail the advantages and disadvantages of the common LCD panel types – the types of LCD technology used in the monitor. While there are minor revisions/versions of monitor panels types, today we will be focusing on the differences between IPS, TN, PLS, and VA panels, but we will also be covering CRT for grounding, despite CRT not being an LCD panel type.

First, to be clear, there is no “best” panel type out of these, as all have their respective advantages and disadvantages over the others. The information here pertains to general characteristics, as even panels of the same panel type will have some variance in characteristics (power consumption, backlight bleed, etc.) depending on the luck of the draw. Manufacturer tuning can also impact display output, affording some differentiating leverage to manufacturers sourcing from panel suppliers (which is effectively all of them).

What is a CRT Display? 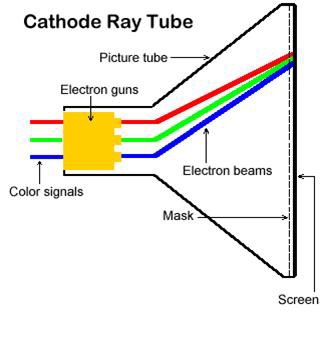 The earliest widely available and used consumer PCs employed CRT (Cathode Ray Tube) monitors. For this reason, CRT monitors are oftentimes remembered in fondness (or contempt) by those who grew up using them.

Nostalgia or riddance aside, there are still some valid reasons to use a CRT monitor. When compared to LCD panels, CRT monitors can have higher contrast ratio, very low response time (which leads to non-blurred pictures even with fast movement on screen), and very little input lag, although LCD input lag can be largely negated. The downsides of CRTs are apparent, though: they’re large, heavy, consume more power, produce flicker, can produce audible, high frequency noise (although age plays into whether one can hear them or not), produce slightly distorted images, and produce harmful electromagnetic waves (in the form of x-rays), which requires that toxic materials such as lead and barium must be used as shielding to prevent detrimental health effects. CRT monitors are also notoriously hazardous to repair, given their large, active electrical coils that can measure upwards of 50,000 volts of electricity.

CRT displays are sometimes still used in medical, simulation, military, and government fields that have embedded the displays into control panels and machinery.

CRT monitors have largely gone out of production, and are rarely sold new (finding a used CRT is fairly easy), but their advantages temporarily lent themselves to some special uses. In regards to gaming, CRT monitors have historically been advantageous to use when gaming competitively due to very little motion blur and very little input lag. That being said, these advantages have faded with the progressive march of TN panels.

TN panels now have low motion blur (especially with lightboost or a similar technology), offer high refresh rates, low response times (1ms GTG in many cases), and are more than adequate even in the world’s most competitive games.

Ultimately, for the vast majority of users, the disadvantages of CRTs aren’t worth their limited gains, especially when TN panels meant for gaming more than adequately satisfy the needs of even competitive gamers.

What is a TN Display / Monitor? 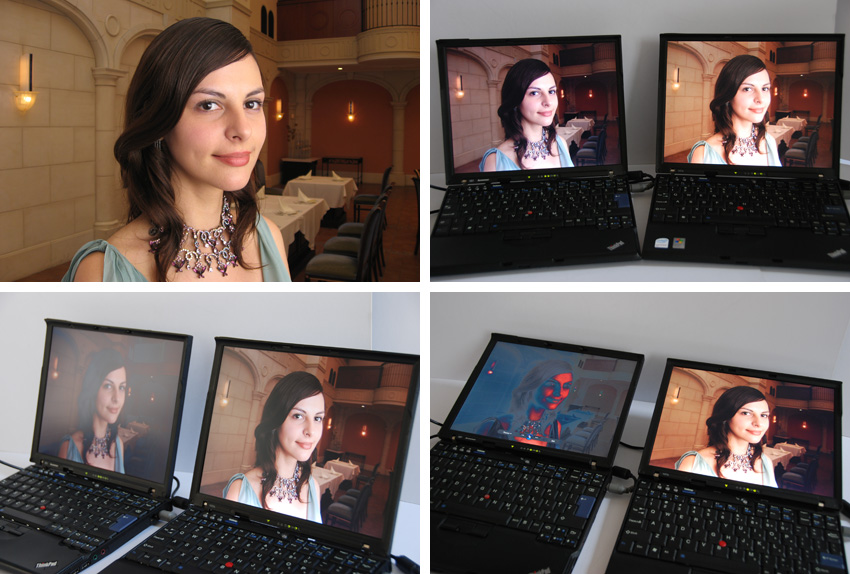 TN (Twisted Nematic) panels were the first LCD panel type that were widely produced, and are still among the widest-used panel types.

To be clear, many of these issues have been improved upon, but due to the underlying science of LCD TN panels, cannot be completely resolved. In fact, many of these issues -- like uneven backlighting, motion blur, input lag, and dead/stuck pixels -- are inherent issues across all LCD panel types. Poor viewing angles become a more pressing issue with larger displays, since the viewing angle when viewed straight on increases towards the outside of the monitor, thus causing more color distortion. TN panels do have the advantages of lower response times and higher refresh rates than other panel types/CRTs. TN panels are generally from 60Hz to 144Hz, offering substantially greater fluidity of gameplay with higher frequencies.

Still, compared to other LCD panels, TN panels suffer from poor viewing angles and worse color reproduction. Ultimately, for most gamers playing somewhat competitively to very competitively, TN panels are a good choice, but for those looking for a prettier and improved color experience, another panel type may be worth considering.

IPS vs. TN Display - What is an IPS Panel?

IPS (In-Plane Switching) was created to address the shortcomings of TN panels. IPS panels seek to solve TN panels’ issues of poor color reproduction and viewing angles. In this regard, IPS panels have largely succeed. Not only do they offer a higher contrast ratio (superior blacks), high color accuracy (which leads to IPS panels also generally looking less “washed out”), but IPS panels also have very little color shift when changing the viewing angles.

The tradeoff to this is that IPS panels have slower response times, higher production costs, higher power consumption, and lower possible refresh rates. IPS panels have traditionally been 60Hz, although, as with all monitors, they can be overclocked (results will vary). There have been improvements to IPS panels over the years, and slightly different revisions in the form of E-IPS and H-IPS, but ultimately the differences between these versions are inconsequential to gamers and those not involved in graphic design as a job.

Due to their worse response rates and lower possible refresh rates, IPS panels are generally considered to be worse for competitive gameplay and used more often when color is important, such as graphic design. For gamers who don’t play competitively and prefer breathtaking strolls in Skyrim instead of sweeping scrubs in CS:GO, an IPS panel should be a consideration for the next monitor.

PLS (Plane to Line Switching) are quite similar to IPS panels, so much so that they have the same advantages and disadvantages, with a couple extra minor advantages. PLS is produced by Samsung, who claims that compared to IPS panels, PLS panels have better viewing angles, a 10% increase in brightness, 15% decrease in production costs, increased image quality, and allow for flexible panels. Samsung’s PLS panels have been known to overclock well in monitors such as the QNIX 2710 in particular. Overall, PLS is basically Samsung’s version of IPS, as it is very similar in functionality (and even name). AHVA is also very similar to IPS and PLS, and differentiation between them is rare, although it should not be confused with the next panel type.

VA (Vertical Alignment) panels offer a solid medium between TN and IPS panels. VA was created to combine the advantages of IPS and TN panels, and largely did, although they did so with some compromise. That seems to be a theme in the world of monitors.

Compared to IPS panels, VA panels have the advantage of higher possible refresh rates. Although most are currently 60Hz, there are a few that are above 60Hz. VA has more advantages over TN panels than IPS, with better color reproduction, higher maximum brightness, and better viewing angles. VA panels do have the best contrast ratios of all panel types mentioned, but they also have the worst response times of the monitor technologies covered here. This causes blurring in fast-moving pictures and is disadvantageous to gaming.

VA panels are a bit of a jack of all trades panel.

For the use of gaming, VA is not the greatest option due to generally higher response time in comparison to other panel types; this slower response causes more motion blur, effectively eliminating its deployment for fast-moving titles. For a general work monitor, VA panels provide high contrast ratios, brightness, refresh rates, good color reproduction, and good viewing angles.

TN vs. IPS vs. PLS vs. VA Panel Type Conclusion

As with many things in life, nothing ever seems to be perfect. Each panel type/technology has its own advantages and disadvantages.

CRTs provide practically no input lag and have extremely low response times, which makes them useful for competitive gaming, but their size, resolution limits, aspect ratio restrictions, and other issues make them largely unused in recent years.

TN panels are another good choice for competitive gamers, as they support higher refresh rates, low response times, decent input lag, and high resolutions. Their bad viewing angles, color reproduction, and slight blurring compared to CRT monitors (due to higher response times) are all disadvantages, ones which cannot be easily fixed.

IPS panels solve the issues of TN panels, with better color reproduction and viewing angles, but do so at the cost of refresh rate and response time. IPS panels are especially useful for those not wanting to play too competitively, but want a beautiful/immersive visual experience. PLS and AHVA are similar enough to IPS to usually not be differentiated.

VA panels provide a good middle ground with better-than-IPS refresh rates and contrast levels, but have worse viewing angles and color production, although generally still better than TN. Response times are VA’s largest downfall, though, being slower than IPS and its variants and TN.

What’s best for you will depend on all of these items. For those wanting to play at a competitive level and who favor FPS or racing games, TN panels are best. Those wanting a more impressive and immersive experience may want an IPS (or similar variant, such as PLS), especially if working on artistic endeavors. Finally, those wanting a general monitor for work might consider a VA panel, although due to their higher response times, they won’t be good for gaming.

While monitors may sometimes seem simple in that they just display pretty pictures -- as with everything else -- they are more complicated than they appear at first glance.