What is voltage ripple?

Power supplies supply power, and the ATX specification calls for 12, 5, and 3.3 volt outputs. In a perfect world, the output voltages would be exactly 12, 5, and 3.3v but, sadly, this is not the case.

In part due to the switching behavior of modern PSUs, the 12v rail won’t be exactly 12v. Instead it may be 12.12v (which, by the way, is reasonable), and when looked at with a high accuracy oscilloscope, it can be seen that the voltage jumps up and down rapidly. For example, it may jump between 12.10 and 12.14. This is referred to as voltage ripple – since it ripples – and it is measured from peak-to-peak on the wave.

Taking the example of the voltage going back-and-forth from 12.10 to 12.14, the power supply would be described as having a 40mV ripple. The picture below is a photo of an oscilloscope measuring voltage ripple. A good power supply will keep voltage under control with self-regulation. 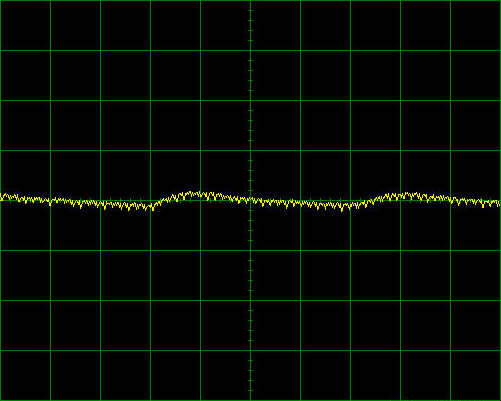 (Above: Voltage Ripple on an O-scope. Source: Corsair Blog)

Now that we know what voltage ripple is, it’s important to have some idea of why it can be bad. The first effect of voltage ripple we will cover is component longevity, and the second, overclocking.

While that is an extreme example, for cheap power supplies, it can and does become a reality. The exact effect of this in actual numbers unfortunately hasn’t been well-tested (publicly), but for a point of reference, Arrhenius’ rule states that the estimated life of a non-solid electrolytic capacitor is doubled for every 10C drop in temperature. The extra heat generated also decreases the efficiency of components (power loss through heat is a common occurrence in all electronics).

Another result of voltage ripple can be decreased overclocking potential. While VRMs on motherboards and graphics cards filter voltage as best they can, they aren’t perfect, and some ripple will remain. When overclocking, a certain voltage is required to maintain an overclock. The exact voltage and clock speeds vary from GPU to GPU (or CPU or RAM), but the same general patterns stand.

Due to voltage ripple -- as a reminder, it’s small and rapid changes in voltage -- a drop in voltage could result in a GPU not being provided enough voltage to maintain its stability at that clock speed. This would result in the GPU rendering incorrectly, driver crashes, and general instability. 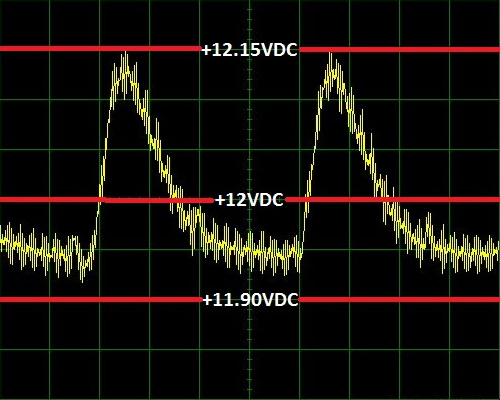 This is a little easier to understand with an example.

Say there’s a GPU clocked at 1.2GHz, and it needs 1.212v to be stable. Let us define “requirement” of voltage on a purely electrical, hardware level; by this, we mean that it is not the voltage input into overclocking software by the user, but the voltage demanded by the physical hardware. Keep this in mind.

In this instance, let’s assume there is a voltage ripple of 50mV, which isn’t uncommon for the 12v on a consumer PSU. Since the GPU requires 1.212v to be stable, setting the voltage at 1.212v would result in instability since the voltage ripple would drag down the GPU voltage, lacking high enough voltage at times to maintain its clock speed. So it crashes. To rectify this, the voltage must be raised by the overclocker until, despite any variance of voltage from voltage ripple – which is diminished by VRMs – there is always a 1.212v supply. The raising of voltage causes an increase in heat production and less efficient components, which also eats into GPU OC TDP headroom and thermal headroom. Voltage ripple can also cause the voltage to raise to the point at which it is unstable for the GPU, causing further errors and excess heat.

While excessive voltage ripple is bad, some amount is perfectly normal and okay. All ATX power supplies have some amount of voltage ripple simply due to their design. For this reason, the ATX specification has limits for voltage ripple. It varies from rail to rail, resultant of voltage differences on each rail. The ATX specification requires that the 12v have a maximum ripple of 120mV, and 50mV for the 3.3v and 5v rails. While this is the maximum voltage ripple allowed, many -- myself included -- have their own standards. I generally like to see around or below 60mV for the 12v rail, and 35mV for the 3.3v and 5v. This drives-up cost, but allows for greater OC stability.

Capacitors and other components are meant to withstand some voltage ripple, as it is a necessary evil for modern day PSUs.

Voltage ripple is a negative aspect of power regulation and supply, but it is acceptable within certain limits. In excess amounts, voltage ripple can cause components to wear more quickly and even lower overclocking potential. As said though, some is alright, and is accounted for in properly designed components. To avoid the possible issues caused by voltage ripple, we suggest buying a higher-quality power supply when using precision components.