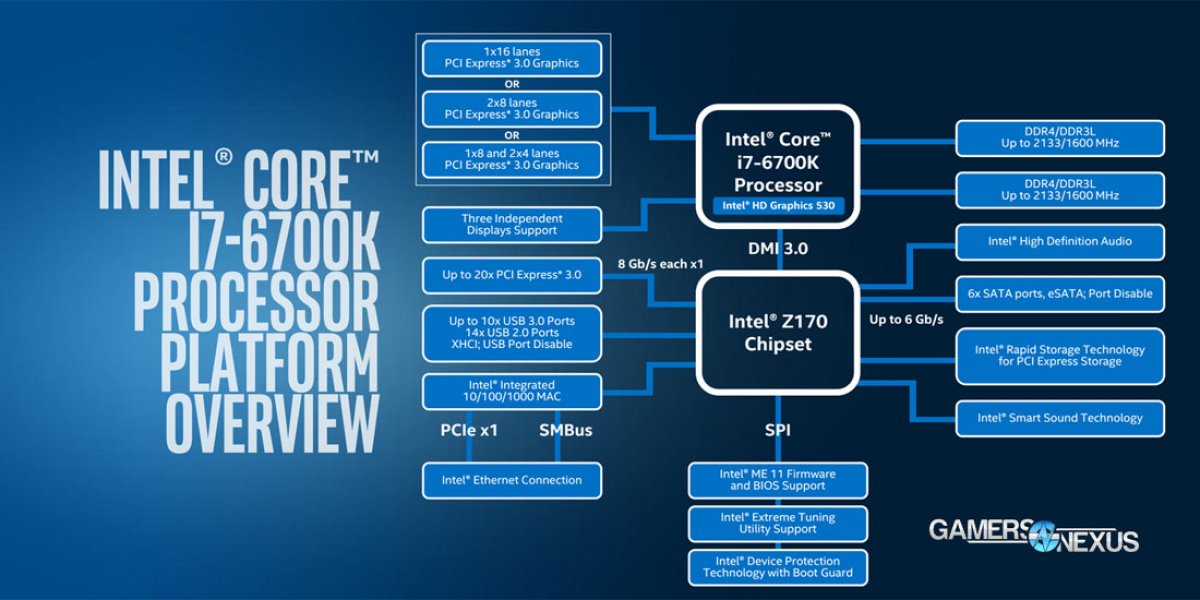 A chipset acts as the computer's brainstem; it connects everything, serving as a central hub for communications and I/O management across the motherboard and its attached devices. Intel chipset selection for gaming machines is often simplified into a just selecting the newest Z-series chipset (Z170, in this case), which isn't always necessary. Rather than buying features that go unused, we suggest reading through our below specs comparison of Z170, H170, H110, and B150, then picking the best chipset for the job.

This chipset comparison looks at the differences between Intel's new 100-series chipsets for Skylake (Z170, H170, H110, B150, Q170, and Q150). We'll talk about the best Intel chipset for a new motherboard or CPU, looking at different use cases for each.

Starting with the specs to clear everything up, we'll initiate with consumer-focused Z- and H-series chipsets.

Intel's chipset names have been the same for several generations, sans the death of the old P-series (pre-Z “performance”) chips. Let's recap the names for the uninitiated:

X: X-series chipsets are for Intel's “Extreme” processors, like the 5960X ($1000) or 5930K CPUs. The X-series chipsets use a different socket type than the more mainstream Z- or H-chipsets. X99 is outfitted with 2011 pins against Z170's 1151, for instance. An X-series chipset must be coupled with an Extreme Series CPU; X-series chipsets are not compatible with mainstream CPUs (and vice versa). “X” chipsets host CPU architectures that are more advanced versions of the current Z-compatible CPUs. Haswell shipped to the mainstream (i7-4770K, i5-4670K) before Haswell-E was delivered (normally the following year) with increased cache size, more cores, and DDR4 support.

Z: The Z-series chipsets are the top-of-the-line mainstream option. Intel normally launches its Z-series before any other chipsets in the family, shipping alongside early K-SKU CPUs of new architectures. Z chipsets are fully unlocked for overclocking, generally host more PCI-e lanes, and are the “premiere” offering among Intel's same-family chipsets. “Z” means “Performance” in Intel vernacular.

H: The H-series chipsets host the same CPUs and architectures as their more expensive Z counterparts, but are more feature-limited. The H chipsets will often include small business features that gamers will find useless, but also disable some other performance/enthusiast features (like overclocking) as a means to offset cost and reduce complexity.

B, Q: B and Q chipsets are targeted almost entirely at business. Small business features and virtualization features creep into the options offered by B and Q chipsets. Overclocking is disabled.

First off, check out our recent Z170 vs. Z97 differences article to read about the major advancements made on the 100-series.

Starting with Z170 and H170, the biggest differences are those of lane assignment. Z170 hosts 26 high-speed IO (HSIO) lanes, which are allocated to various IO controllers by the motherboard manufacturers. These are split between PCI-e, SATA, USB, M.2, Gigabit Ethernet, and similar interfaces. The PCI-e lanes are split into groups of four lanes (5*4 = 20 PCI-e 3.0 lanes on the chipset), so they're no good for SLI (which demands 8 lanes), but can drive numerous other devices. Keep in mind that M.2 SSDs utilize PCI-e lanes, normally to the tune of 4-tap.

Z170 also enables overclocking fully through BIOS, though to what degree is dependent upon motherboard manufacturer UEFI offerings. K-SKU CPUs are best-suited to Z170 to take full advantage of their potential.

H170 drops some of this support. HSIO sees a reduction to 20 lanes from 26, limiting interface availability slightly. H170 also dips down to “just” 8 USB3.0 ports against Z170's 10USB3.0 ports, though both support 14 total USB ports. PCI-e lane allocation on the chipset is dropped from 20 lanes to 16 on H170, and the PCI-e configuration is limited to 1 x16 on a stock H170 board. This means that H170 will be generally incapable of supporting multi-GPU solutions. Note that the CPU itself hosts its own PCI-e lanes that can allow for multiple PCI-e slots on board, but these will be meant more for expansion cards than multiple graphics cards.

Overclocking support is disabled on H170. It would be unwise to couple a K-SKU CPU with H170 given the locked state of the motherboard.

As for H110, the biggest change is its one-DIMM-per-channel restriction, limiting memory configurations substantially. The H110 chipset also moves independent display support from three to two, and further simplifies technologies by eliminating Smart Sound and RAID support. ISRT is also killed in H110, RST moves to 0, and the chipset offers just 14 HSIO lanes with 6 PCI-e 2.0 lanes. Only 4x USB3.0 ports are available on H110. After all of this, H110 becomes a barebones, stripped-down version of its more outfitted cousins, making it a better fit in non-US markets (Asia, for one) or for ultra-budget US markets. The reality of the situation is that H170 will likely be a better buy almost no matter what for US consumers, as the cost difference between “bottom-of-line” and mid-range is minimal through our retail channels.

The Q and B chipsets are for business users – those who might be building a system for a small storefront or office, for instance. All the frills are axed, including overclocking, and focus is instead placed on reliability and professional support.

Q170 is eligible for Intel's Stable Image Platform Program (SIPP), which improves stability and deployment of system images to the host. This makes Q170 desirable for administrators of computer labs (think: a school) where reliable image deployment is demanded on a regular basis. Q170 also supports vPro, a virtualization bridge that helps prevent or mitigate intrusion occurring below the OS in the stack. Neither of these two technologies is available on Q150 or B150.

Value & Conclusion: What is the Best Chipset for my Gaming PC Build?

For gamers, we can almost immediately rule-out Q170, Q150, and B150 as suitable chipsets. Q170 has the most gaming-ready features of the three (with its PCI-e support), but cost will be bolstered unreasonably given the business focus when considering more mainstream alternatives. This, then, moves us into the range of just Z170, H170, and H110. We're ignoring X99 as it hosts an entirely different CPU architecture.

The most immediate way to narrow the options down is to answer this simple question: “Do I want to overclock?” If the answer is “yes” or “maybe,” then Z170 is where the buck stops. If the answer is “no,” we can start considering other requirements of the system. GPU configuration, for instance, would be the next fork in the road; users who demand SLI or CrossFire should be buying Z170, and those who know they will never need it can begin considering H170.

Users uninterested in overclocking can save money by opting for a non-K CPU, and then can further save money by using an H170 motherboard (if multi-GPU configurations and/or additional PCI-e devices are unneeded). H110 would be found in ultra-budget builds and makes sense in some regions. For most NA and EU buyers, we'd strongly recommend H170 as the baseline when considering gaming-grade parts.

If you require further system build assistance, consider leaving a comment below or posting on our forums for expert, free, one-on-one advice.