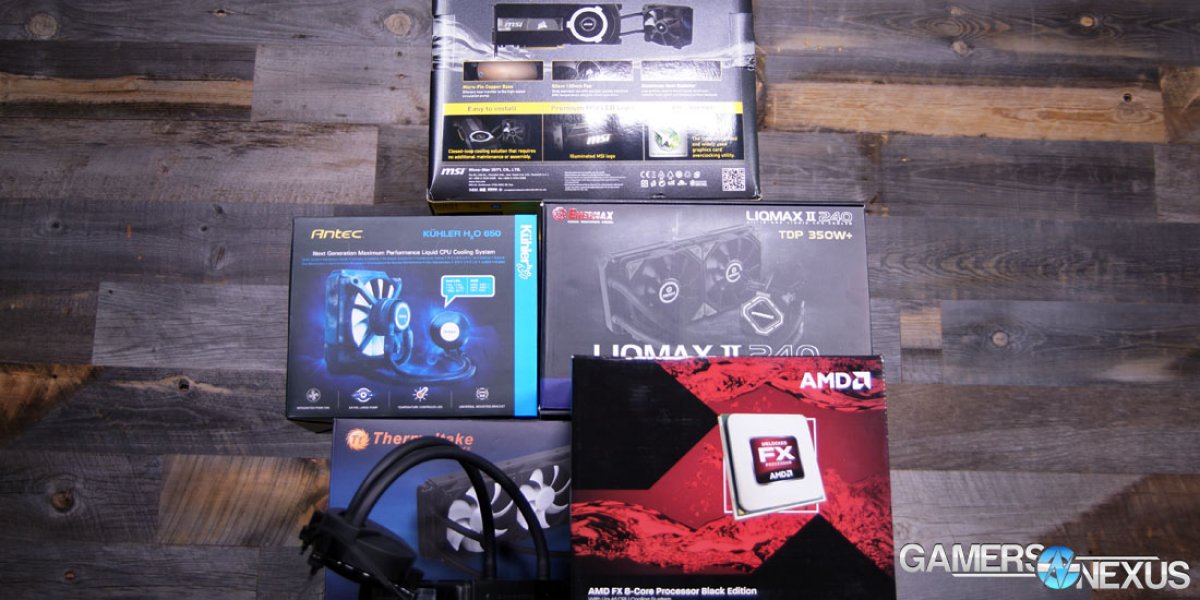 The above chart excludes several products and manufacturers. This is just a look at some of the most prominent offerings.

Learning the Difference: An OEM (Supplier) and a Manufacturer

The OEM, or Original Equipment Manufacturer, is what we're calling the “supplier” in this article. The OEM builds the device, whether guided by external design or by its own, and sells that device in high quantities to brands (we're calling them “manufacturers”). These brands are the customer-facing manufacturers of products, the ones who likely present the device as their own, brand it as their own, and sell it as such. This relationship is why, for example, a consumer isn't able to buy a non-branded “Asetek” or “Apaltek” liquid cooler through normal retail channels.

Such an unbranded device (primarily Asetek and CoolIT) could be acquired through SI channels, like iBUYPOWER and CyberPower, and doing so will reduce total system build cost while still providing the liquid cooling solution. System integrators use liquid coolers without branding to reduce the total cost to build (that branded logo can be expensive), providing them a leg to stand on when competing against DIY pricing. This is also why some of the stock CLCs from SIs run cheaper than “upgrades” to low-end air coolers, like the Hyper 212. It is also part of why some DIY system builds can so closely mirror SI pricing, alongside other marketing development funds that may be in place by various companies.

OEMs are used everywhere. Motherboards, cases, power supplies, GPU coolers, mice, keyboards, headsets, mechanical switches – someone makes all that underlying stuff, and it's not normally the companies selling the compiled, end product. A mouse sensor might be made by Avago or Pixel Magic and its switches by Omron, but it's still a mouse designed and executed by (most likely) a known brand.

The OEM and the branded manufacturer both take on the job of compiling all these parts into some sort of product. They work together throughout the process to, hopefully, develop something that's unique from the same-supply competition. It ultimately makes better sense to outsource production of the various components within a device to OEMs who are better-equipped to make the devices in question.

Sourcing a device from an OEM reduces BOM (bill of materials) and the final retail price of a product, but introduces a new problem: Everything's sort of the same. It all looks vaguely the same, it performs often vaguely the same, and it's priced about the same. The manufacturers have to make their brand stand-out somehow.

Manufacturers like Corsair and NZXT will provide input to their suppliers – CoolIT, Asetek, or similar – on how they'd like the CLC to be different from competition using the same product. This boils down to things like radiator size, radiator thickness, tube length and type, LED presence, software support, pump speed or variance, and some more granular changes (like aluminum fin density). The buyer of an OEM-supplied liquid cooler will often use their own fans (often made by – you guessed it – another OEM, like Dynatron), the specs and design of which can greatly impact cooling performance.

Once the back-and-forth negotiation is complete, the OEM's core product has been modified to a point of reasonable differentiation – hopefully – and is ready for market.

One major upside to a market filled with products that have a similar root supplier is compatibility with other devices. Take NZXT's Kraken G10 GPU CLC bracket, for instance: The G10 will work with any Asetek-made CLC, including those made by NZXT's competitors. This helps in some unintentional standardization of mounting support strictly by nature of being made by the same few companies.

Knowing that major, respected brands don't necessarily engineer every aspect of their products does make the industry somewhat less mystifying. SilverStone and Corsair don't have secret basement factories where they're creating entirely new liquid cooling pumps and solutions, but these companies (and most the others) do test, validate, and improve upon what is compiled to create the final product. The manufacturers try various fan configurations, speeds, they test new OEM technologies (like variable pump speed), and then they build a product that should offer the greatest value (cost-to-performance ratio) for the consumer. Building it all in-house is expensive, and that doesn't necessarily make it better.

So, while things are a little less infatuating, this knowledge shouldn't detract from the brands who get the selection and design process right. Using the same OEM, it is equally possible to make a good or bad product: the wrong fan choice could create turbulence within the radiator and prohibit efficient dissipation, for instance, or the tube length could be too short to function in a larger case (and vice versa for smaller cases).

Hopefully this provides some insight as to how your favorite coolers are made and sourced. Let us know if you have questions!