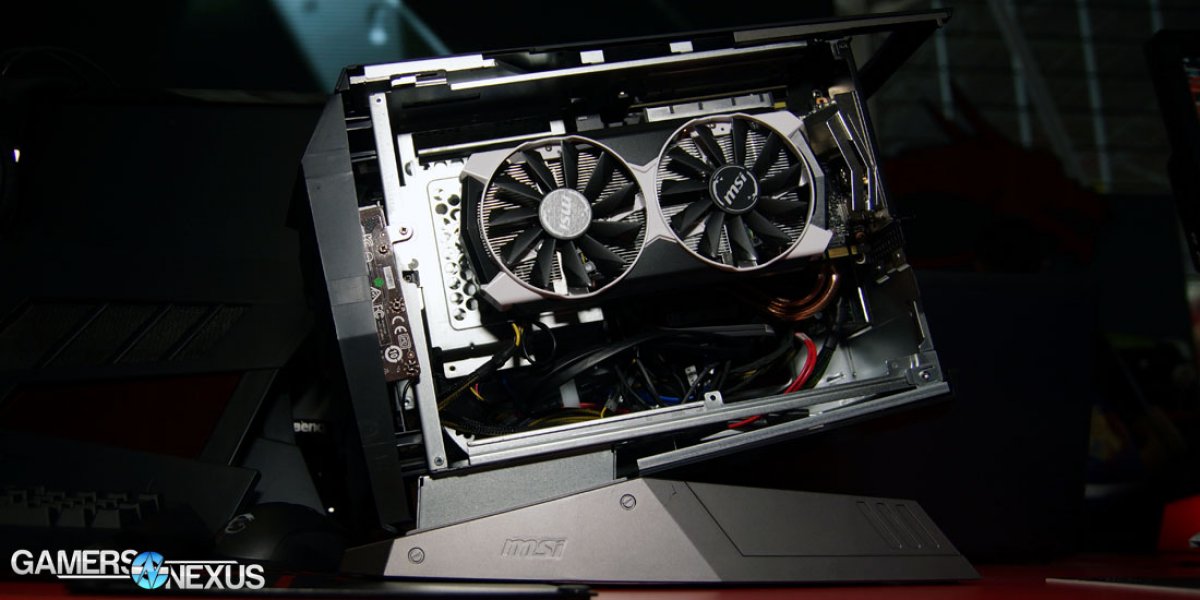 A show floor crawling with tens of thousands of people is an interesting environment for a PC tear-down – certainly more chaotic than in our labs. Still, whenever we've got an opportunity to take something apart during an unveil, we take it. MSI's recently unveiled Aegis (video below) fancies itself a barebones machine that borders on a display unit, mounted atop a power-supply enshrining pedestal that resembles Hermes' winged shoes.

While at PAX East, we weaponized our camera toolkit to disassemble MSI's Aegis barebones gaming PC, which includes a custom case, motherboard, and unique CPU cooler. Side panels came off, the video card was removed, and we more closely examined the custom cooler that MSI's packed into its compact enclosure. 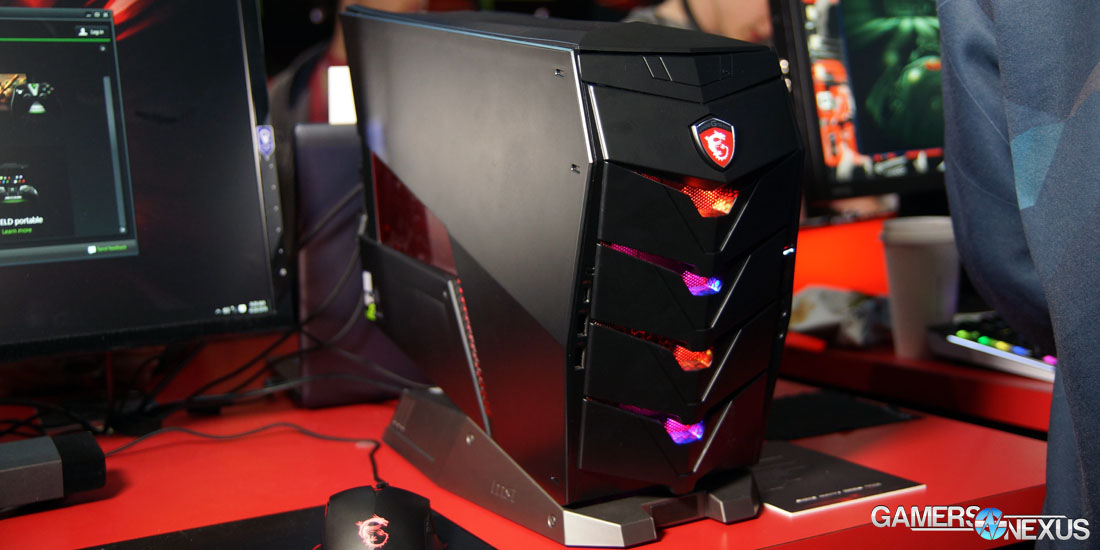 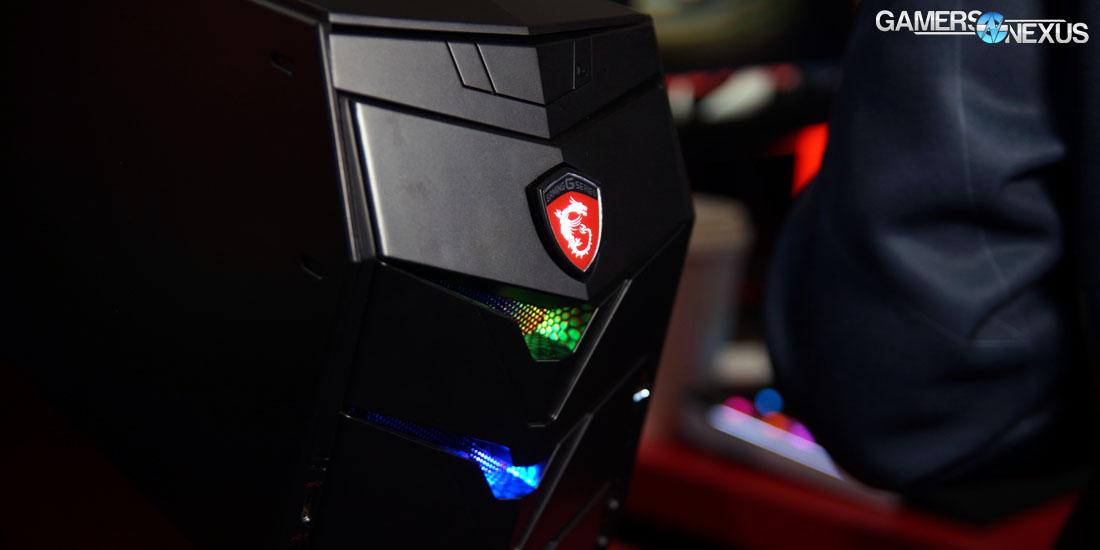 The chassis is mostly steel with plastic accents where it'd be obvious – the front panel and stand, mostly – and is accessible through the usual two side panels. MSI's Aegis has a custom power supply entombed within the base of the tower (adding weight for balance), which is cooled with a small axial fan and offers 600W (80 Plus Silver) of non-user-serviceable power. This is enough power for any single-card configuration you could currently build, based on our own watt draw validation. The axial fan is configured as a pull (pull air out of the PSU, not push air in) and looks to be ~40mm.

Meshing is present where VGA push fans would be pressed against the wall (granting access to outside air), though the front of the enclosure also allows minimal air intake in between the “Mystic Lighting” RGB LED mounts. On the left side panel is a tinted red window – it doesn't offer much visibility into the case, but is an attempt – and small ventilation channels. 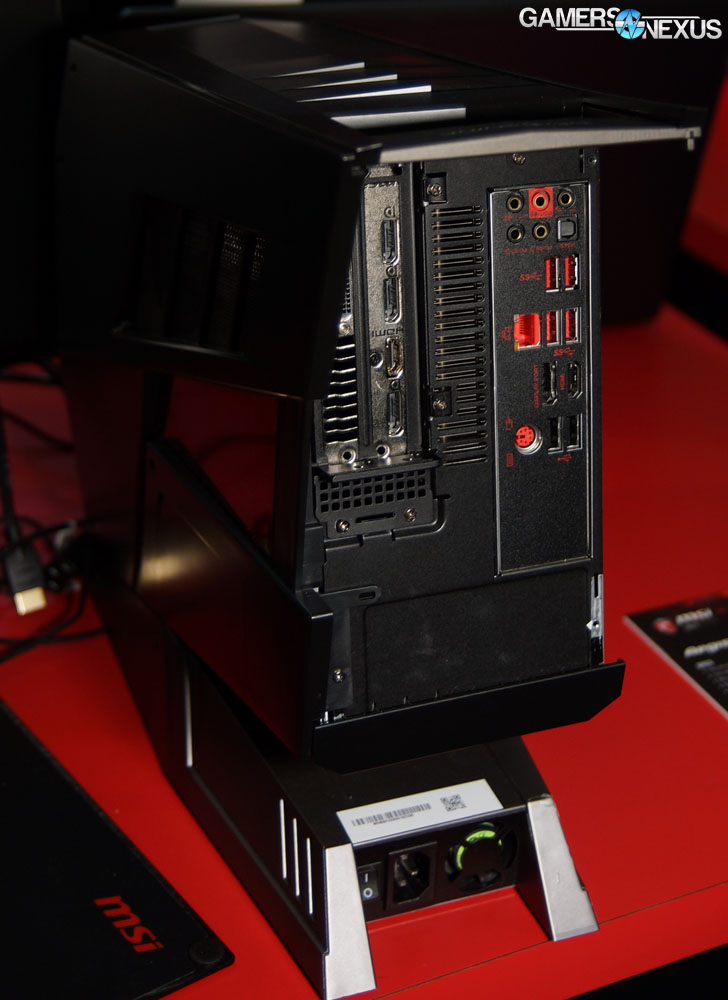 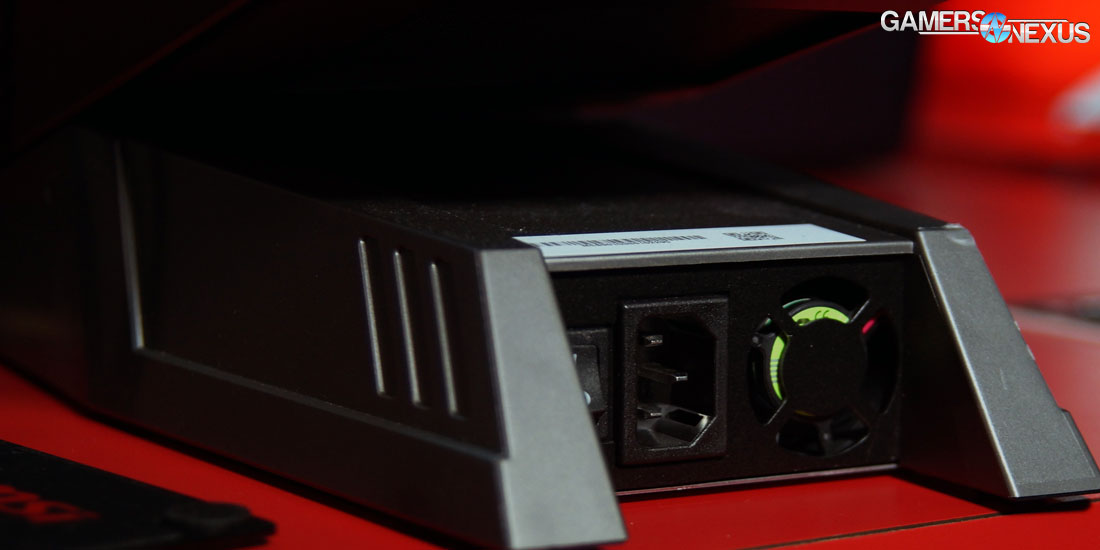 With the included motherboard, rear IO consists of 5x 3.5mm audio ports + optical, 5x USB (could be 6?), 1x on-board HDMI & DP, 1x PS/2, and 1x GbE. Two expansion slots are available for the VGA, which is locked into place with a mounting bracket and a pair of screws. 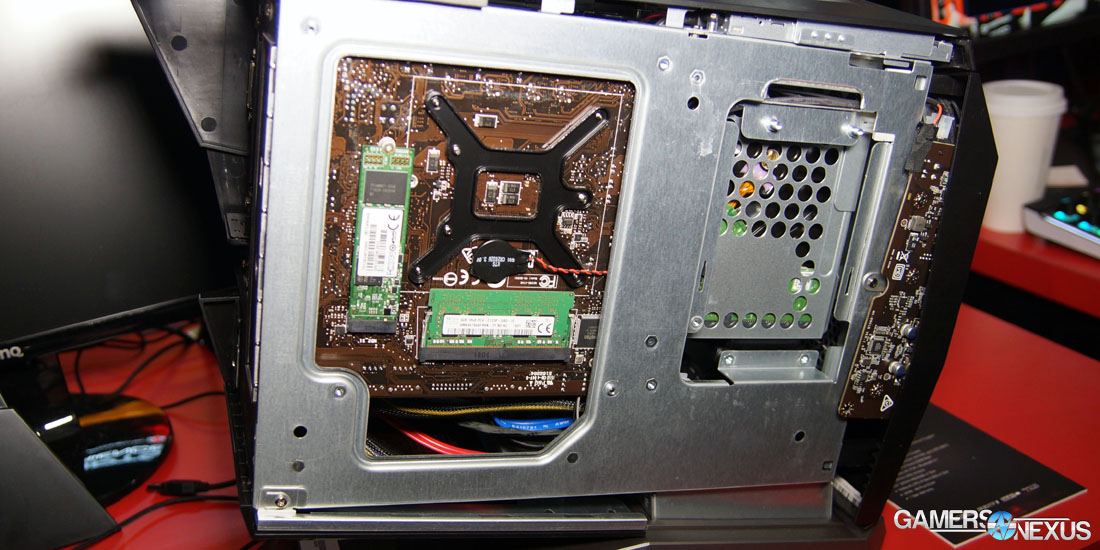 The system uses an inverted motherboard layout. Removing the left side panel reveals the rear of the motherboard. Interestingly, the motherboard has a rear-mounted memory slot (using laptop SODIMM RAM), rear-mounted gumstick SSD slot, and rear-mounted CMOS battery. This last item – the CMOS battery – is actually brilliant, and will hopefully never be realized by most users. Resetting CMOS is one of the simplest, most effective PC troubleshooting steps. To grant easy access in a small enclosure is not trivial (most systems require complete disassembly for CMOS access). We hope some of the SIs, like iBUYPOWER and Origin, take note of this decision.

A PCB (likely for power management and LEDs) is located toward the front of this side. We did not remove the PCB while at PAX. 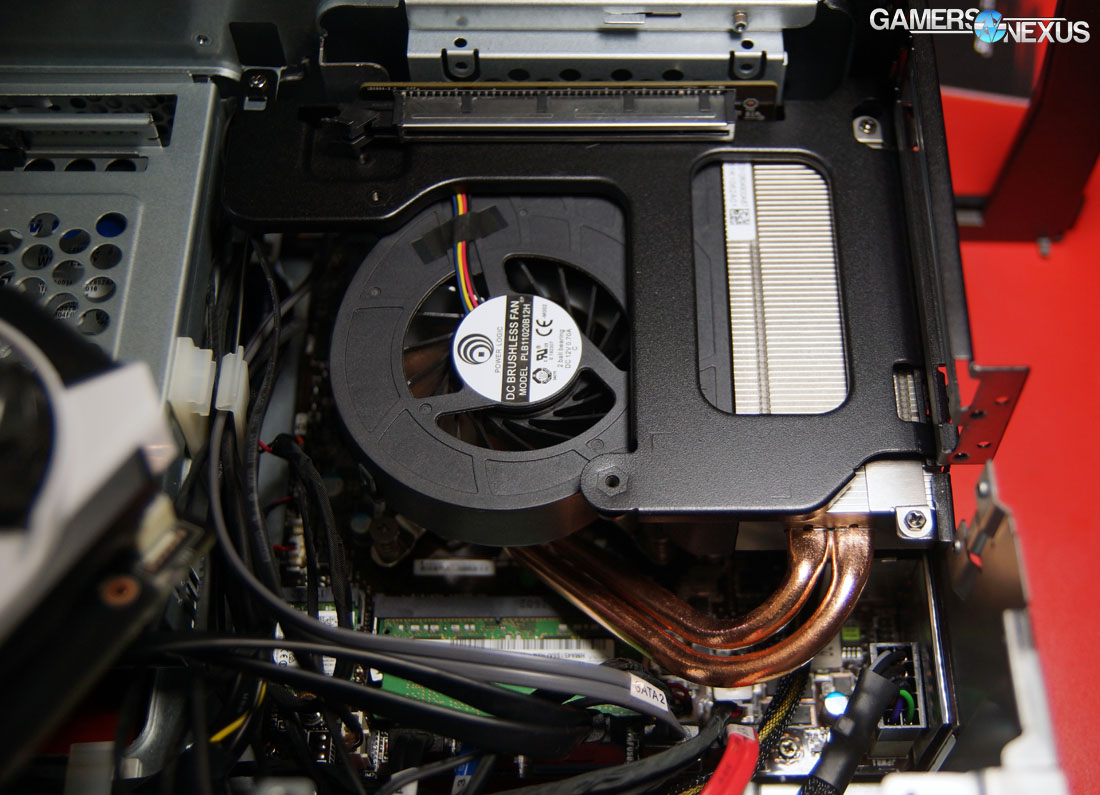 Switching to the right side (main compartment), the video card conceals almost all of the internal components. Ignore the cabling – that was left messy by the previous media team's tear-down. The VGA is mounted upside-down and directly into the PCI-e slot on the motherboard, meaning that MSI managed to avoid using a PCI-e riser cable. This will marginally (and likely imperceptibly) reduce latency. Users may purchase any VGA which fits in the enclosure. We are presently unsure of the exact VGA clearance, though MSI has demonstrated a GTX 980 fitting within the enclosure.

Removing the video card grants access to the custom CPU cooler (made by Power Logic and using a 2-ball bearing, DC brushless fan). The cooler is comparable to a high-end notebook cooler, using a thicker and more resolute construction of aluminum fins, copper heatpipes & coldplate, and a laptop cooling fan. Two copper heatpipes conduct heat away from the CPU IHS and into an aluminum heatsink, whose fins then dissipate heat with assistance from the fan. Hot air is pushed out the back of the case. Air is received from the top (passively) and front. 2x 3.5” and 1x 2.5” drive cages are present in the top panel region, just above the CPU cooler, and additional RAM and M.2 (looks like E-key) slots are located under the CPU cooler's heatpipes. 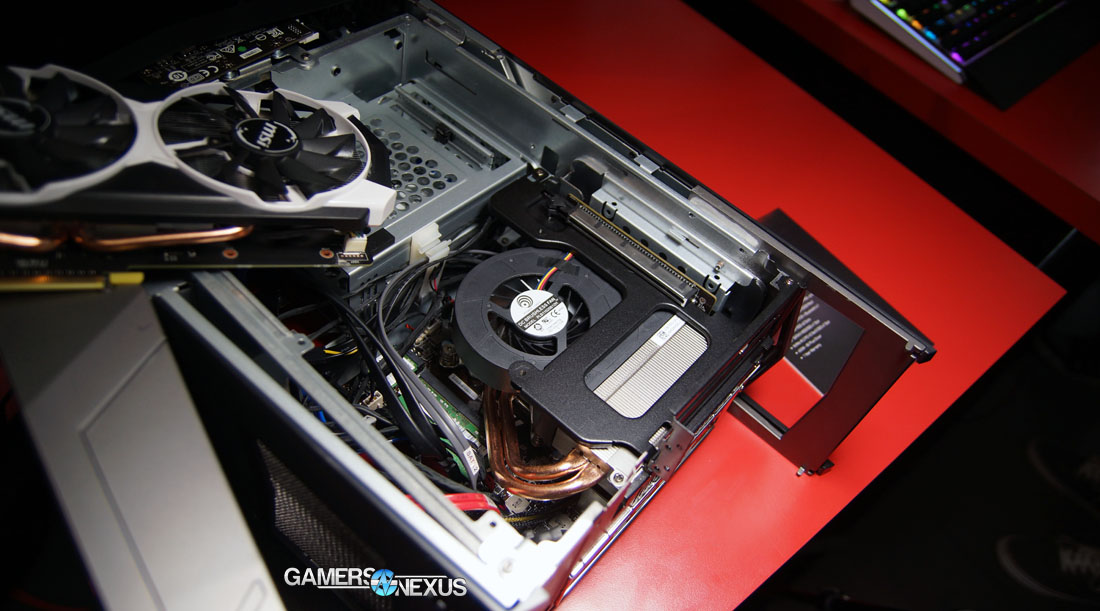 The PCI-e slot is encased in steel plating, which should improve durability and resistance to GPU sagging. A metal bracket encompasses the entire cooling unit and rests between the VGA and CPU cooler.

There are at least 3x SATA connectors available on this motherboard.

We're curious about how the Aegis will perform with regard to thermals. Such a tight enclosure – without resorting to liquid, anyway – is difficult to ventilate, but MSI's present solution is to throw a high-end laptop cooler at the CPU. We've seen this work in the past, but will reserve judgment until we've had adequate time to benchmark the system.

Stay tuned for the full review of MSI's Aegis.