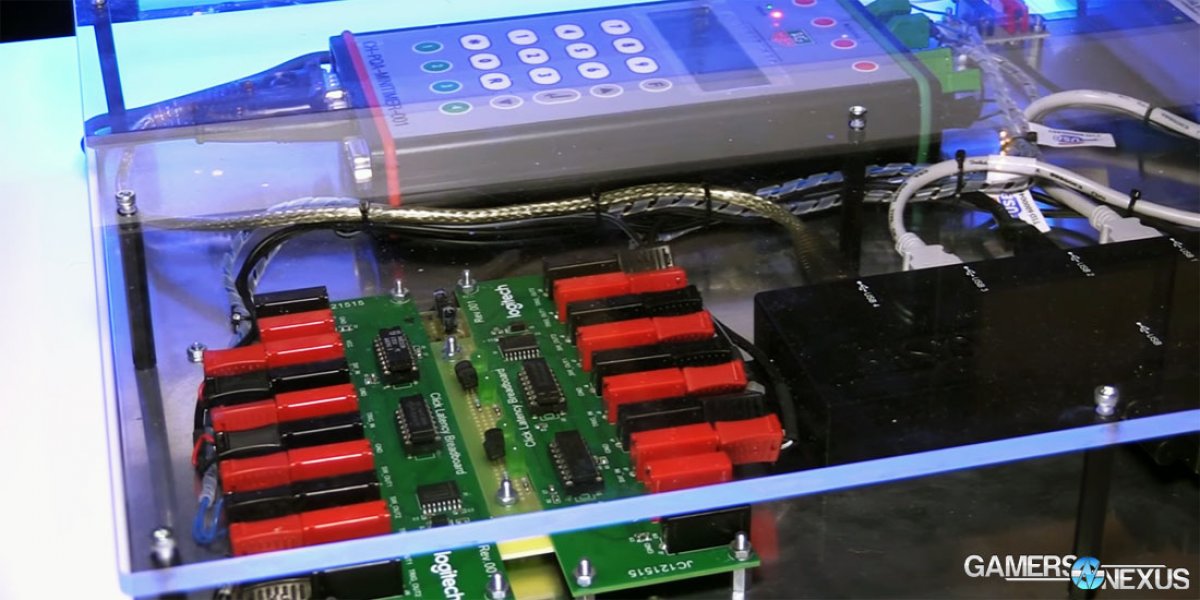 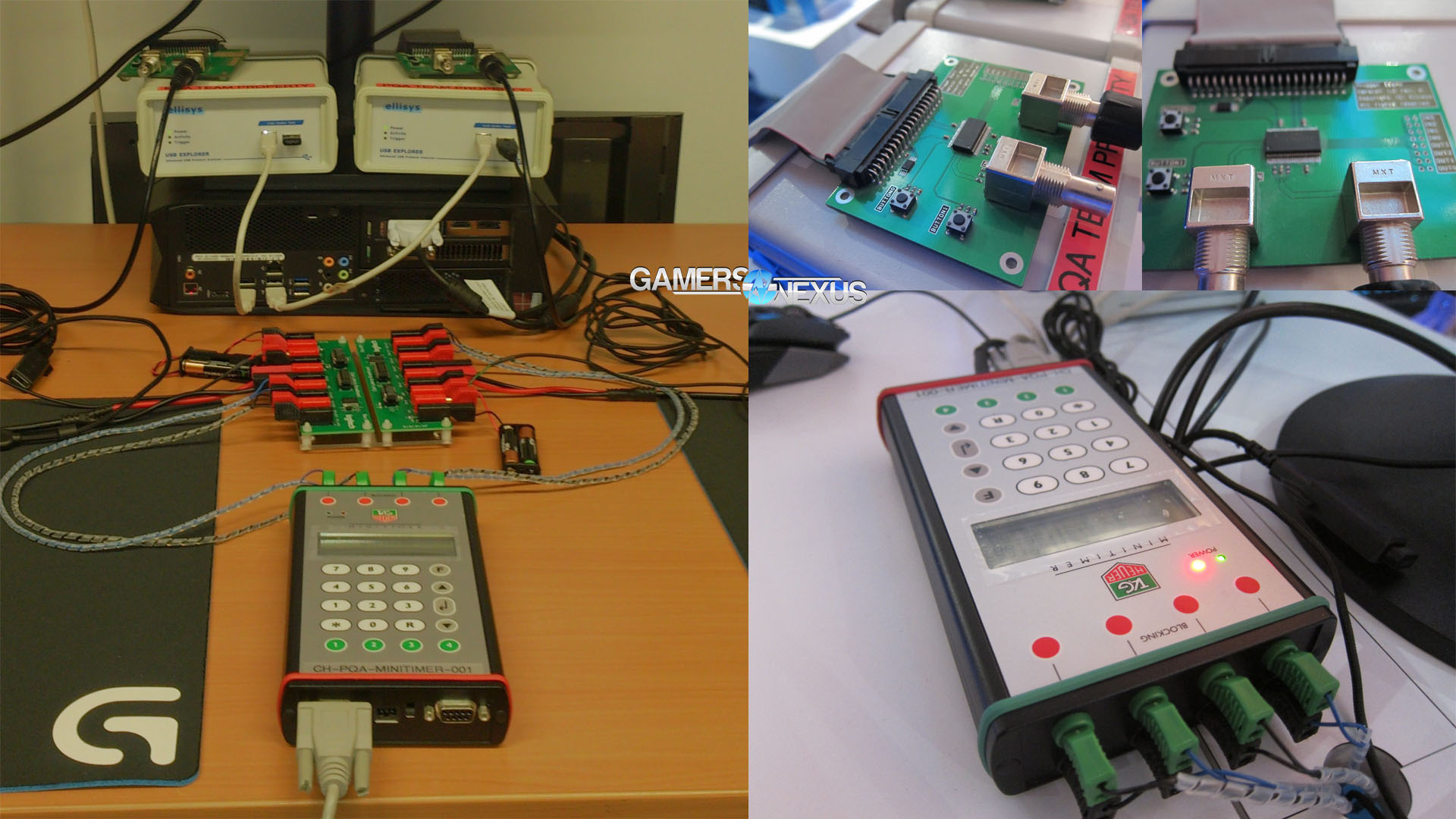 Above: Logitech's setup from the previous PAX event (East).

Logitech's setup is using a few different off-the-shelf components, but also involves a custom breadboard and custom software. Two mice connect to a USB analyzer via their USB cables or, in the case of the G403 Wireless mouse, the wireless receiver that's attached at the end of a USB cable. Also protruding from the mice is a soldered-on cable that communicates the electrical signal to a switch, which then forwards the signal to Logitech's breadboard for further processing. That electrical signal is created upon button depression (two plates contact), and is sent down the secondary cable before any processing occurs on the mouse.

Once the signal is sent to the breadboard and processed, a timer gets involved to look at millisecond deltas between the creation of the electrical signal (the instant the user clicks the mouse) and the receipt of that signal by the host platform. This second part – the signal being received by the host – is measured by comparing against USB analyzers, which don't receive input from the mice until after on-mouse processing has occurred. By comparing the electrical signal's dispatch time and the data from the USB connection (wired or wireless), software is able to present the click latency from mice in milliseconds. This data demonstrates the time required for the entire pipeline to process the user's click – from keyplate press to receipt by the OS – and further shows that wireless is not necessarily inherently worse than wired. 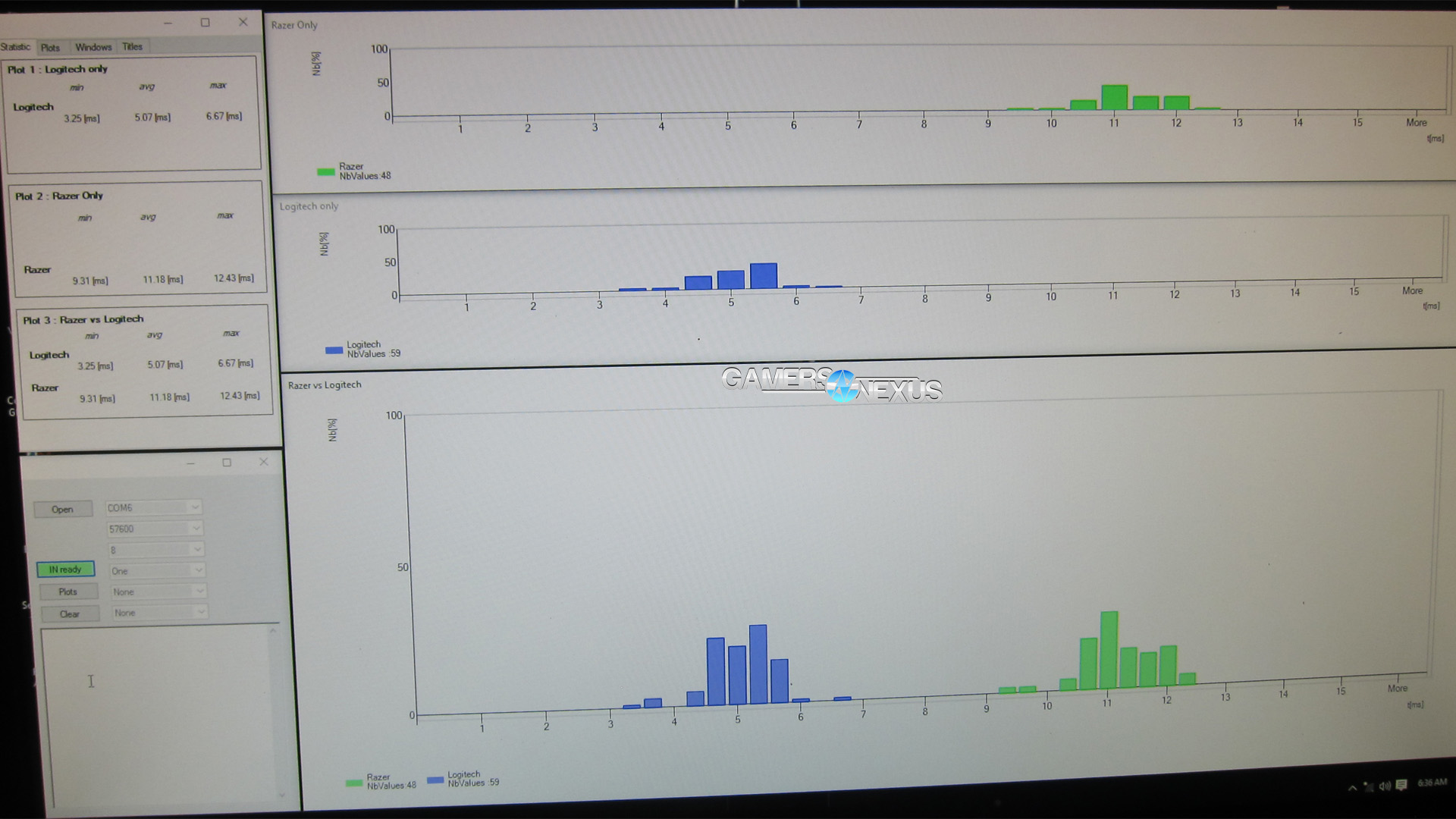 Now, there is a valid reason for that belief to exist: A lot of wireless keyboards and mice are cheap, and are generally intended for a more consumer/office user. These devices may have slower report rates (as low as 250Hz, in some cases, versus a gaming mouse's 500-1000Hz), and definitely use less sophisticated wireless functionality than a $150 mouse.

Note that this click latency test is not meant to demonstrate that the G900 or G403 Wireless mice are objectively better than the selected Razer DeathAdder Chroma. The DeathAdder is widely regarded as a good, reliable mouse, and Logitech doesn't believe Razer's product could reasonably be described as “too slow” for its input latency. To this end, Logitech selected the mouse as an ambassador of good gaming peripherals, then hooked-up their own wireless devices for the demonstration. The result is that the Logitech mice perform within the ~3~6ms range for click latency, where the Razer mouse performs within the ~9~12ms range for latency.

Although data supports Logitech's mice as faster in delivering the completed input, the difference between the two is largely irrelevant and would be obfuscated by the much slower human latency. What this data does definitively show, though, is that a well-constructed wireless mouse is not inherently, significantly slower than a well-constructed wired mouse.

From a methodology standpoint, we found this test setup to be cool and worth a video/article from the PAX show floor. It's brilliant in some ways, and is an area we're interested in expanding into for our own future testing.