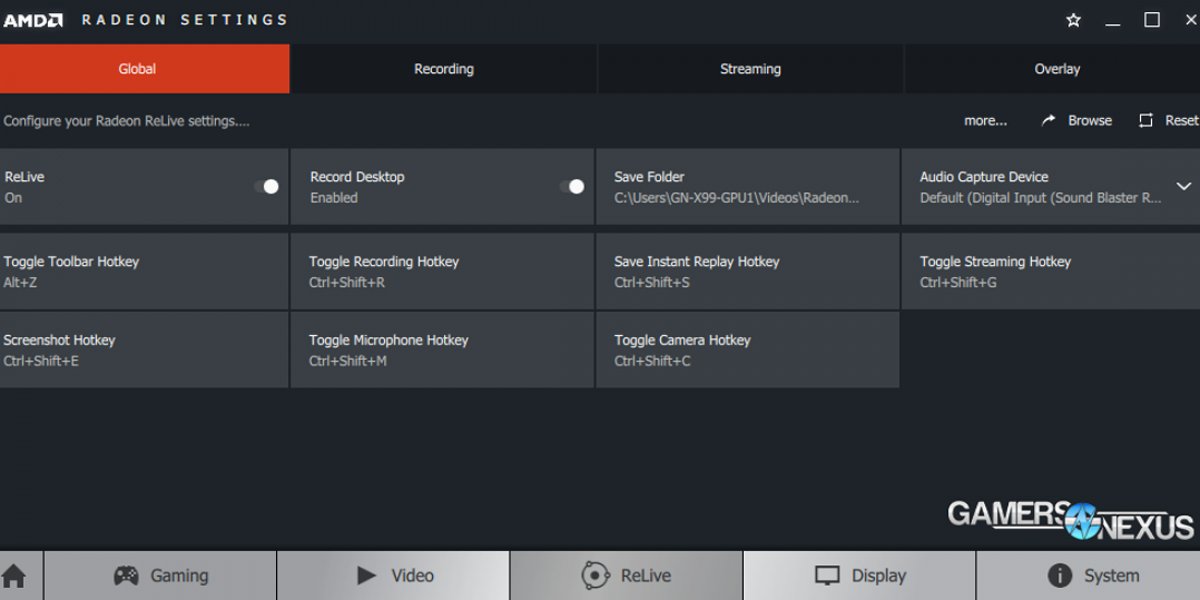 Before the video, here’s a table that GamersNexus compiled to for a ShadowPlay & ReLive comparison:

Note: In the GTA testing, you’ll notice some missing meshes on the jeep. Some of this is randomization. Some is due to Radeon Settings’ out-of-box configuration, which includes AMD optimized tessellation and other changes to game graphics. It is not a change from the recording software.

Note also: AMD’s announcements for today contain a whole lot more than just the ReLive update, but that’s all we’re focusing on here. Check back tomorrow for our analysis and discussion of OCAT, the overlay and benchmarking tool that couples with PresentMon, and for discussion on other tools within the AMD suite – like an update to the Chill platform.

Let’s start with a walkthrough of the interface.

AMD is using an overlay setup similar to ShadowPlay for capture of screenshots and video, including capture of the desktop and non-game applications. ReLive also establishes the same default hotkey as ShadowPlay – Alt-Z – but changes are possible through the interface. The hotkey pops up the overlay, through which you can easily modify capture settings, toggle capture without a hotkey, or begin retroactive gameplay capture and broadcast. The ReLive solution plugs into Twitch, YouTube, and custom servers directly. ShadowPlay allows both Twitch and YouTube, but does not yet offer a custom server option.

In many ways, ReLive and ShadowPlay are similar. We’ve highlighted a few of the key differences between the quality settings and options in the above table.

Maximum supported bit-rate is where we’re starting. This was checked with an RX 480 Gaming X connected, while ShadowPlay was using a GTX 1060 Gaming X. We figured these cards are best for creating scenarios where we’ll later see any potential performance loss, and better represent the current end-user market.

With ShadowPlay, we’re able to output a level of quality that rapidly enters into “placebo” territory, maxing out at 130Mbps datarate, but GFE used to be limited to around 50Mbps in its earlier iterations. ReLive seems to max-out at 50Mbps, at least with this deployment, and uses similar low/medium/high quality presets to ShadowPlay. Preset qualities are also listed in the above table, but note that they aren’t an indication of who’s superior – just a note of what you’re getting for presets. Custom tuning is trivial with both ShadowPlay and ReLive.

Encoders for ReLive can be switched between AVC and HEVC, while nVidia’s uses its own solution for x264 encoding. Both ReLive and ShadowPlay are hardware-accelerated encoders, with designated GPU components responsible for handling all the encoding on the card. This moves the workload off the CPU and minimizes strain on I/O, as would be generated from lossless formats or non-accelerated solutions.

Moving down the list, we’ve got a default audio bit-rate of 184Kbps when captured by ShadowPlay, without options for customization. This bit-rate was found simply by inspecting the files, as it’s not openly displayed within the suite anywhere. AMD gets some points here, as the tool allows customization of bit-rate up to 320Kbps. There’s minimal storage delta between the higher bit-rate audio captures, so running with higher audio bit-rate isn’t going to impact performance in an exponentially negative fashion.

Both tools enable custom audio input device selection and choice between push-to-talk or always on microphones.

ReLive also includes a solution to overlay images onto the capture, so you could pre-watermark your video if streaming gameplay. Kind of a nice feature for folks who want to avoid any post-production at all. Also interesting, there’s a system information overlay that can pop-up in the corner at the start of a recording or broadcast, toggleable alongside camera overlays and a “time recording” indicator.

Sure, it’s not as advanced as something like XSplit or OBS, but it’s also not trying to be. Both ShadowPlay and ReLive are trying to fill a simpler gap in the market, not necessarily the semi-pro streamer market.

The below test bench was used for all capture:

Methodology here is straight-forward. We’re testing only with DiRT Rally and GTA V for now, with the former configured to 1440p/Ultra (0xMSAA) and the latter configured to 1080p/Very High + Ultra. Ultimately, it’s not all that important what the quality settings are, they just need to be the same on each device. Remember, we don’t care about a head-to-head FPS output here; that’s not really how this works, and it wouldn’t be linear. We’re comparing on two different video cards, with two different software solutions, and so we can only reasonably generate a performance metric by looking at framerate deltas (versus 100% baseline) to determine actual performance impact.

And there will be one, as is the nature of any such tool. Any recording software will impact framerate at least somewhat, and I/O at least marginally. Something like FRAPS will hit both hard, but GPU-accelerated solutions with on-die encoders won’t exhibit nearly as much framerate loss.

The built-in benchmarks were used for both games. You’ll notice some changes in the mesh complexity with AMD testing (resultant of pre-configured options within Radeon Settings, which we’ll talk about later), but the game’s quality settings were the same in our testing. Besides, again, it just matters that the quality is the same intra-card for the benchmark (though you want them the same for visual comparison, too, as in the above video).

Storage was also simple: We loaded DiRT Rally’s benchmark and let it roll for a full minute. A simple input macro was used to start and stop the recording at exactly the same time (with some variance for usual latency).

All captures, unless otherwise noted, were at 50Mbps on each software solution. AVC was used for AMD (h.264), and nVidia also was formatting with h.264. Compression approach is obviously different, though. Note that, due to encoding differences between vendors, we are targeting a same-size file at the end of the test pass. This allows us to compare quality to file size. AMD’s audio recording was set to 192Kbps, which is the closest we could get to nVidia’s immutable ~184Kbps. The difference in performance is effectively 0, though. 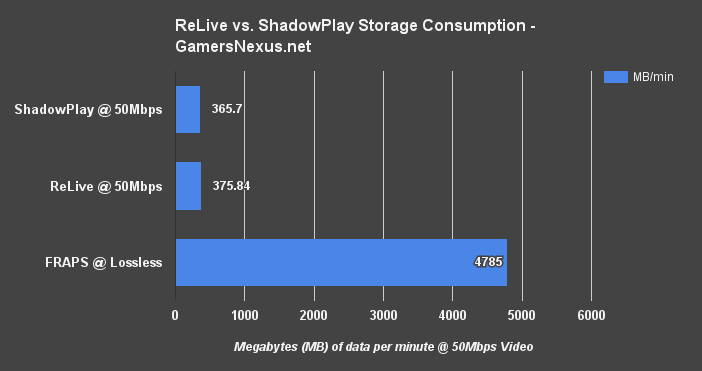 (Note: FRAPS is only here for a frame of reference, since it used to be ubiquitous.)

When we look at file size comparisons per minute of capture, this chart is what we get. For comparison, our old data from FRAPS benchmarking is also present here, since that software hasn’t changed in years and it was once a mainstay in video capture.

We’re looking at a file-size of nearly 5GB with FRAPS, which records effectively losslessly and without GPU acceleration. That’s a bit-rate somewhere in the range of 638Mbps, assuming no compression plays. The newest version of ShadowPlay is capturing at about 366MB for the entire one-minute run, with ReLive capturing at about 376MB for the same pass. This is a repeated benchmark, so we know the data is the same for each test pass, though we do have a slight bit-rate difference in audio for which we can’t control. There are also some very minor differences in DiRT’s bench, like occasionally positioning the camera a bit higher or lower. Regardless, ReLive and ShadowPlay are effectively identical in storage requirements. There is no meaningful difference between the two, with regard to file size.

Starting with DiRT Rally at 1440p with Ultra settings, and using an RX 480 Gaming X for AMD or GTX 1060 Gaming X for nVidia, these are the results we’re seeing: 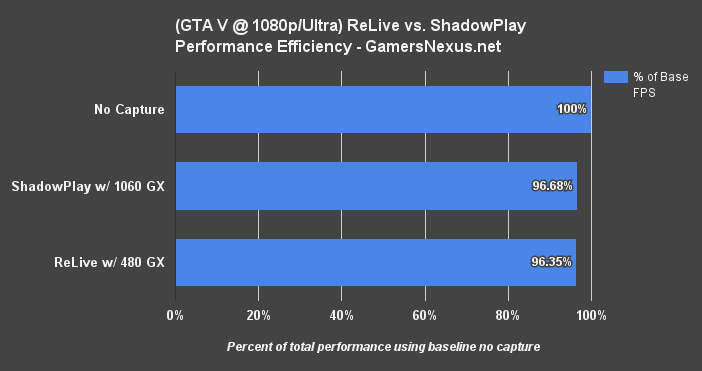 Note that this is relative performance scaling, since raw FPS means nothing to us given the different video cards used for testing.

With GTA V, we see that ShadowPlay performs better than in DiRT. This is certainly something we saw previously, where AMD GVR or GFE 2.0 would vary performance based on game. A lot of that may be how the particular game interacts with the overlay provided by the vendor.

Anyway, the performance difference pegs ShadowPlay and the GTX 1060 at a performance loss of 3.32%, moving from 99.3 to 96FPS AVG. The RX 480 with ReLive loses 3.65% of its performance, a move from 90.3FPS to 87FPS AVG. Not a significant loss in performance for either device. 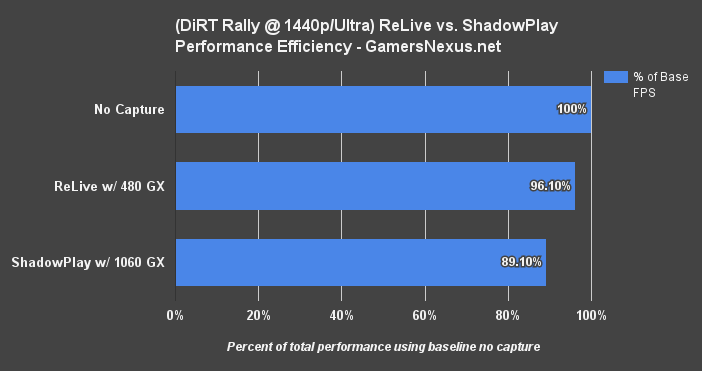 Again, this game doesn’t seem to particularly like ShadowPlay, and we’re certain similar scenarios exist for ReLive – it’s just a matter of getting more hands-on time with the solutions. Either way, though, the averaged spread of performance will remain close to the 3-4% margin for performance loss for both ShadowPlay and ReLive.

This is all good news. It didn’t used to be the case that video encoding could be handled on the GPU itself, which now all have dedicated encoders specifically for this task. They don’t really eat into game processing, and that’s true even when performing retroactive records. Your biggest loss will be from games that don’t like how the particular interface interacts with them, but not generally the encoding process itself. That bandwidth is miniscule at the end of the day, and isolated in its own pipeline.

The biggest takeaway here is that where ShadowPlay was already good, AMD can now compete directly with its own capture tool that performs with similar efficiency in storage and overhead. The interface, for what it’s worth, is also directly comparable to GFE and ShadowPlay.

We’re happy to see AMD finally include its own software-based capture solution. That’s a major feature that shouldn’t be overshadowed. There are plenty of third-party solutions, but integrating this stuff for more simplistic gameplay capture is important. Not everyone needs the complex options that come with OBS and XSplit, neither of which is particularly good for upload-style recording.

The interface overall is easy to navigate and use if you’re already used to ShadowPlay, and should be available in drivers posted for download as of today. Check back shortly for our coverage of the rest of the AMD driver update, though; we wanted to give ReLive its own video, since we have covered this topic in the past for both vendors. There’s plenty more to talk about and analyze.