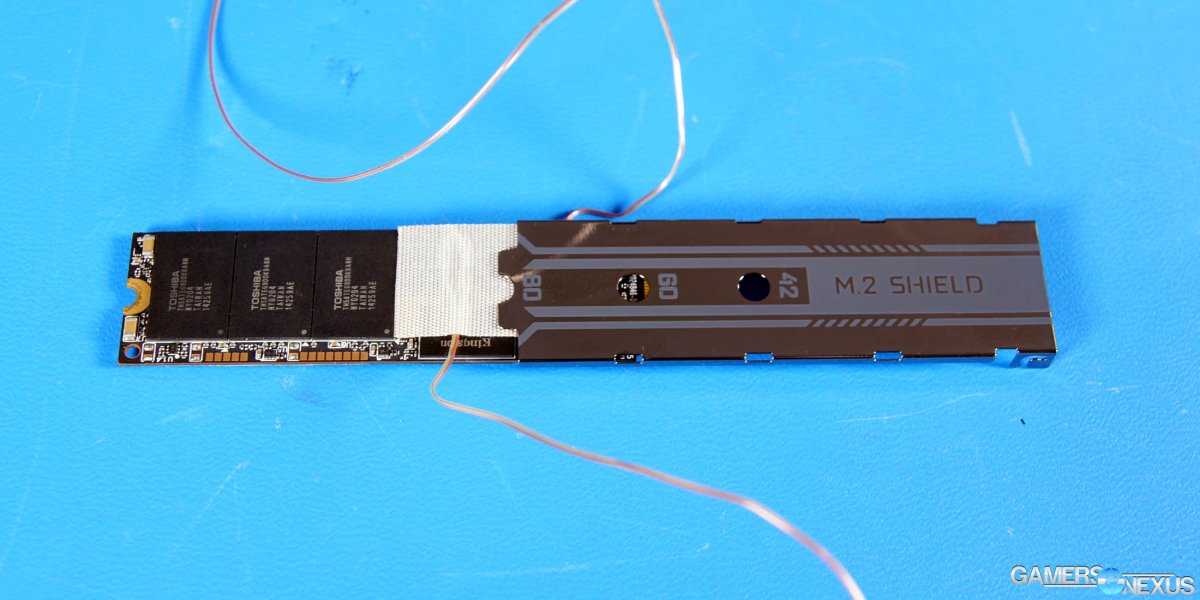 Every now and then, a new marketing gimmick comes along that feels a little untested. MSI’s latest M.2 heat shield always struck us as high on the list of potentially untested marketing claims. The idea that the “shield” can perform two opposing functions – shielding an SSD from external heat while somehow simultaneously sinking heat from within – seems like it’s written by marketing, not by engineering.

From a “shielding” standpoint, it might make sense; if you’ve got a second video card socketed above the M.2 SSD and dumping heat onto it, a shield could in fact help keep heat from touching SMT components. This would include Flash modules and controllers that may otherwise be in a direct heat path. From a heat sinking standpoint, a separate M.2 heatsink would also make sense. M.2 SSDs are notoriously hot resultant of their lower surface area and general lack of housing (ignoring the M8Pe and similar devices), and running high temperatures in a case with unfavorable ambient will result in throttled performance. MSI thought that adding this “shield” to the M.2 slot would solve the issue of hot M.2 SSDs, but it’s got a few problems that don’t even require testing to understand: (1) the “shield” (or sink, whatever) doesn’t enshroud the underside of the M.2 device, where SMDs will likely be present; (2) the cover is designed more like a shield than a sink (despite MSI’s marketing language – see below), and that means we’ve got limited surface area with zero dissipation potential. 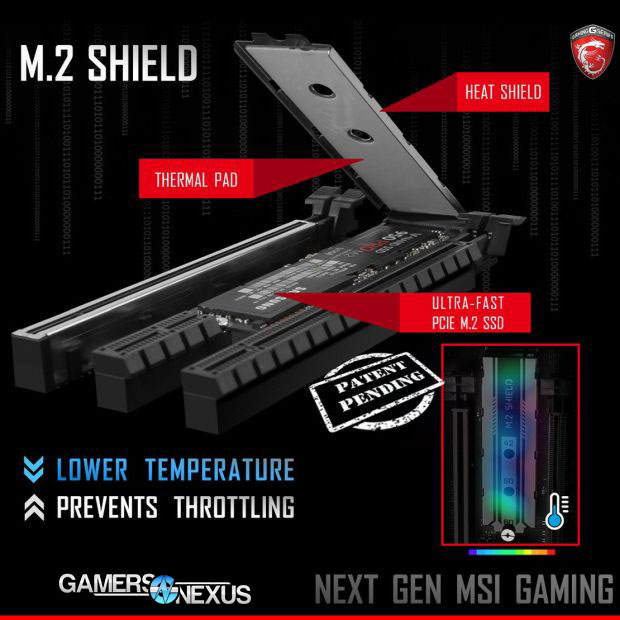 (Above: MSI’s marketing language claims that the “shield” improves cooling by reducing temperatures)

The second point is critical, as you’d need an active cooling apparatus or greater surface area to produce any meaningful heat dissipation or spread (respectively). A fan obviously isn’t going to happen, so adding some fins or using better materials would be beneficial. The thermal pad conducting between the SMT components and the shield is the thinnest we’ve ever seen, and may as well not even be present.

Ultimately, the point is that there’s just no way this thing is going to do any more than trap heat beneath the M.2 SSD and prevent cool air from accessing the drive. There’s just not enough conduction and spreading potential to make up for the lack of even indirect airflow.

We tested MSI’s M.2 “Shield” in a Z270 Gaming Pro Carbon to validate whether the marketing made any sense, and found that, minimally, the shield is poorly executed and should be discarded by any potential owners.

We tested using an Intel i7-7700K (stock) with XMP set to 3200MHz on the kit detailed in the table below. The primary SSD used for the numbers ultimately generated (in charts below) was the HyperX Predator M.2 variant. The motherboard is MSI’s Z270 Gaming Pro Carbon, which comes with the M.2 shield.

Conducting thermal tests requires careful measurement of temperatures in the surrounding environment. We control for ambient by constantly measuring temperatures with thermocouples. We then produce charts using a Delta T(emperature) over Ambient values and non-delta values. The charts are labeled to reflect this. The delta value subtracts the thermo-logged ambient value from the measured diode temperatures, producing a delta report of thermals that accounts for the change in ambient between tests and throughout testing (measured second-to-second). AIDA64 is used for logging thermals of silicon components, including the controller sensor.

Two thermocouple readers (four total thermocouples, K-Type) are used for this testing. Ambient is monitored, as are two hot spots on the Flash. We first used a thermal camera to identify hot spots on the M.2 SSD, accounting for emissivity easily since we’re only measuring an all-black surface and not dealing with a reflective material. The thermal image for this is shown in the video (top of this article), but we’re not embedding it here intentionally; too many people will ignore the words and just assume that the image is, in fact, the test data. That’s not true, and we want to prevent spread of misinformation by people who don’t take the time to read the context surrounding an image. Huge note here: The purpose of the thermal camera is not to get our temperature readings. That wouldn’t work for a lot of reasons, many of which we explained in a previous video. The entire point of the thermal camera is to get a quick understanding of where hotspots are on the bare drive, then we stick thermocouples to those hot spots, with one more thermocouple measuring air temperature.

IOMeter is left to run 128KB fully sequential, 100% write transactions (4K aligned) on the SSD for 60 minutes, with a 60-second ramp period for idle logging. This allows us to stress the SSD in its worst case scenario and produce repeatable results. 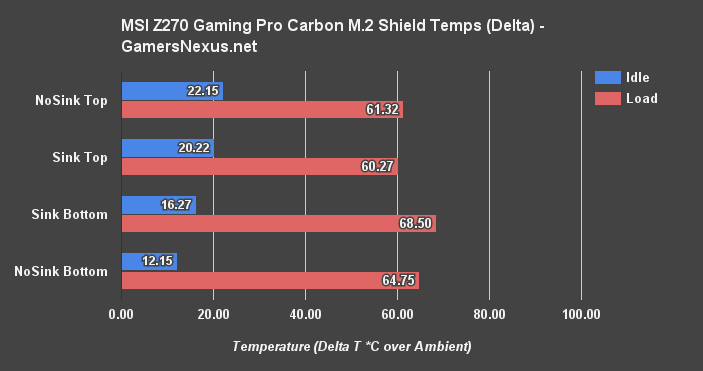 Here’s a chart with the results. This is in Delta T – that’s important – and means we’re subtracting ambient second-to-second for the most accurate results. We’ll show the total numbers next.

Without MSI’s shield, just using the bare drive, we’re seeing numbers that plot the HyperX Predator M.2 SSD at 22.15C for the top Flash module idle and 61.32C for the load temperature. Compared to the version with the heatsink, the top Flash module is now operating at an idle temperature of 20.22C – so about 2C lower – and a load temperature of 60.3C, or about 1C lower. That’s an improvement of 1C for the top of the M.2 SSD, and because of how we’re testing, that’s not “within margin of error,” as folks seem to like to spout without understanding. That is repeatable and provable, and our equipment has been calibrated in thermal chambers.

That said, let’s look at the real secret here: The underside module temperature. Adding that shield means we have no escape for the warm air generated between the M.2 device and the motherboard, and there’s no shielding contacting the SSD components on the underside. This means that we’re seeing a somewhat impressively bad 4C temperature hike on the bottom side for both idle and load when we add the shield.

Let’s move over to the chart that’s using direct readings, rather than the delta over ambient format. That will help put into perspective the impact a 4C increase has. 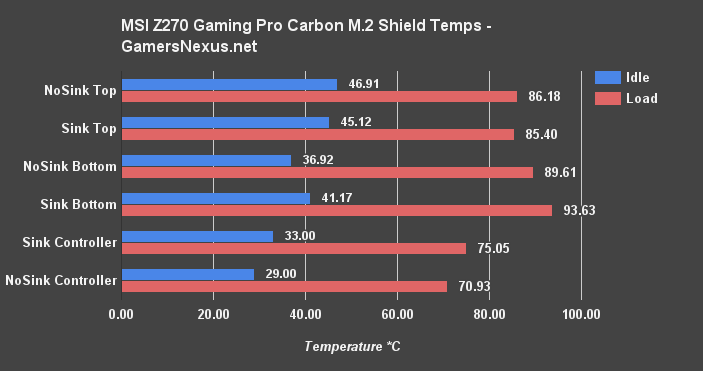 We’re hitting 93.6C versus 89.6C when under load. That’s enough to start entering throttle territory for some SSDs, meaning you potentially lose some performance to keep the thing under control. The controller temperature and its internal sensor placed by Kingston is measuring about 4C higher idle, and 4-5C higher under load. 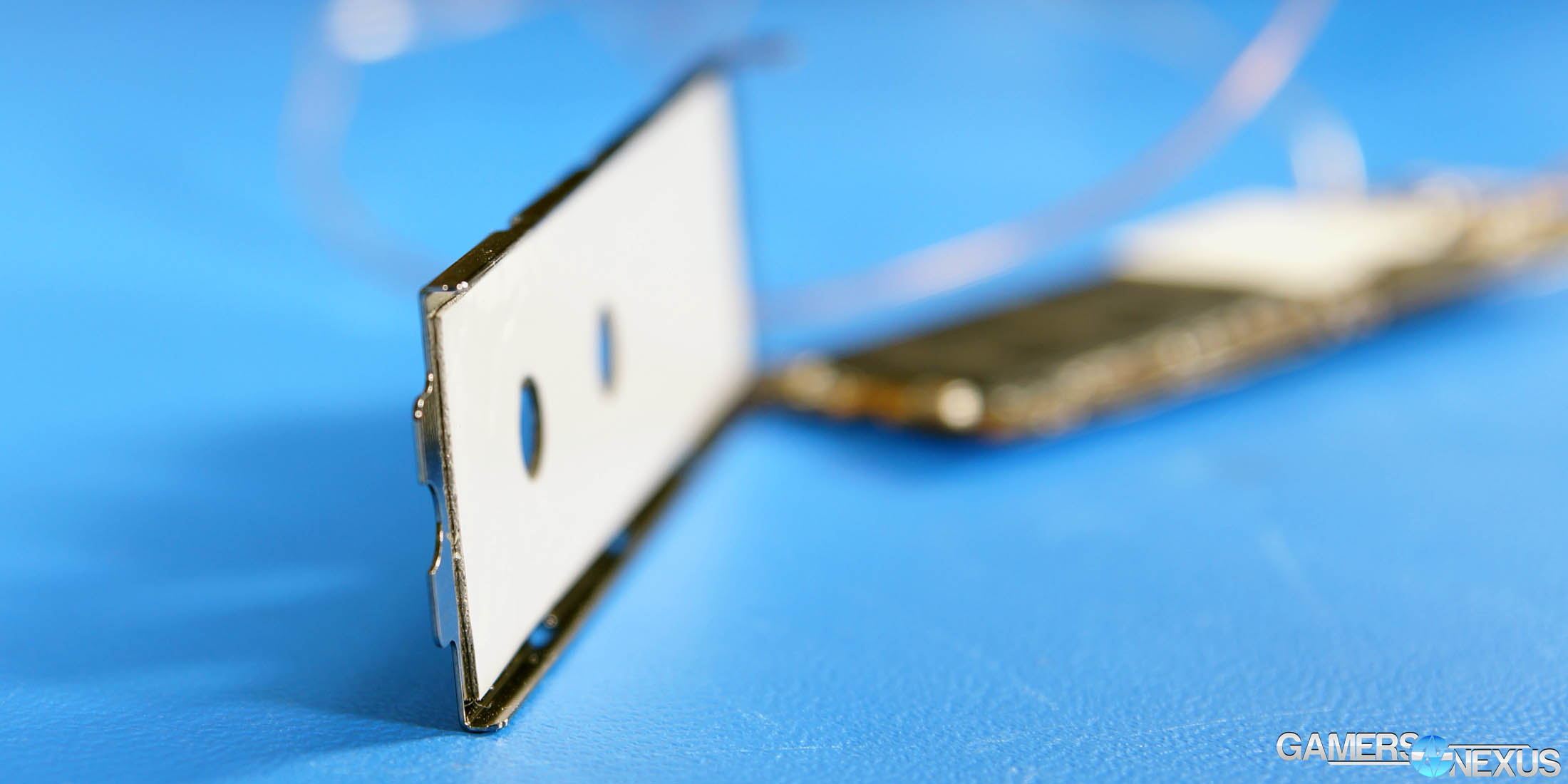 (Above: The world's thinnest thermal pad)

The only thing the M.2 shield is shielding the SSD from is proper cooling. MSI needs to either wrap the entire SSD with the shield and use better interfaces, or needs to ditch the idea altogether. Thermal performance is worse overall. Even if you don’t see throttling on your particular device -- which we didn't -- the increased temperature should be enough reason to not use a product that advertises itself as a cooling improvement.

It’s a nice gimmick, but poorly executed. The intentions are good and are well-placed, given the temperature of M.2 sticks that don’t include some sort of chassis. If one of these motherboard companies can implement a variant of the M.2 shield that actually lowers temperatures, it could be a winner. Right now, the marketing language is inaccurate on the whole. Two of three metrics show a minimum of a 4C increase with the heatsink – shield, whatever – and the other metric shows a 1C improvement on the top-side where there’s contact.

MSI’s only accurate marketing claim regarding this M.2 shield is that it would protect the SSD from “physical harm.” Sure. We suppose. But we don’t think physical harm oft befalls an already-socketed M.2 SSD. And it’s certainly not worth a temperature hike.

Now, the rest of the board isn’t bad, as we’ll soon discuss in our full review. In fact, it overclocks pretty damn well and it’s got a well-designed UEFI menu system. But this one thing is poorly executed and should absolutely be axed from future models (or fixed). If you buy this board – and it’s still worth a buy, though maybe at a reduced price – just don’t use this heatsink. It’ll mar performance.