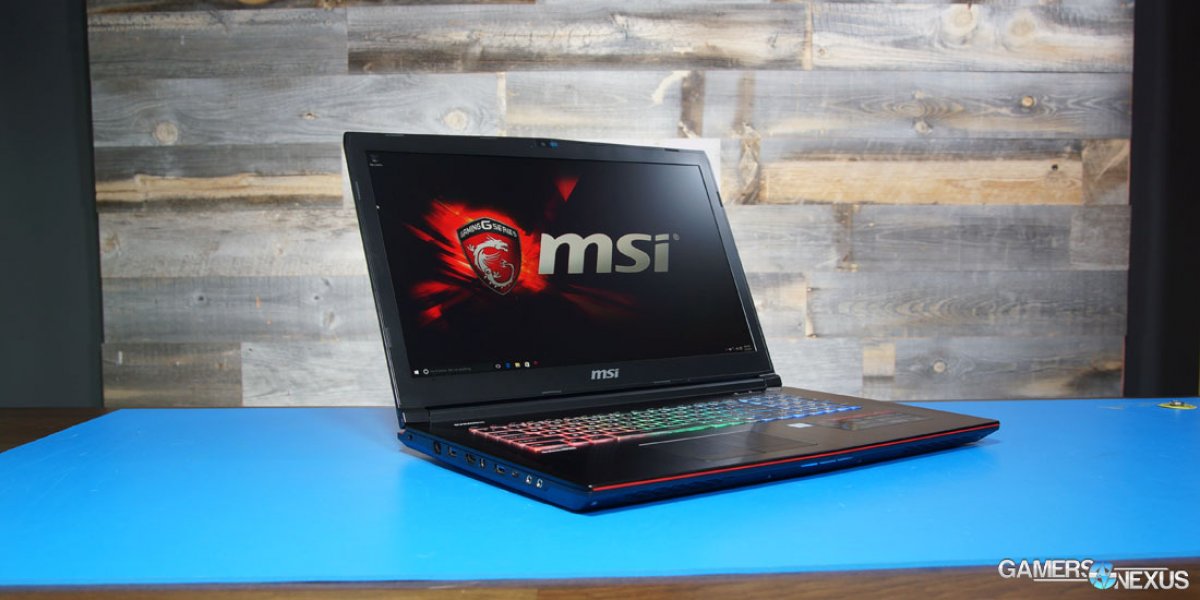 Laptop reviewing and benchmarking comes with a unique challenge: We don’t typically get to hang onto review samples once the cycle is complete, unlike other review products, which limits regression testing for content like today’s. This means that we need to rely on some of our older testing and methodology, but we can still judge scaling based on old games – that should be mostly linear, with some exceptions (which we’ve accounted for in our summary of tests).

Fortunately, the upshot of revisiting older titles for comparative analysis is that those titles do not change. They don’t get updates to game code and they don’t get driver updates, so results should largely exist in a hermetically sealed state.

Regardless, today’s goal is to benchmark the GTX 1050 Ti notebook GPU. We still have a lot of work to do on notebooks as we work to rebuild our bench, but this will start us off. The GTX 1070 is next. We’re starting with an MSI GE72 7RE Apache Pro with GTX 1050 Ti and i7-7700HQ CPU. This isn’t a review of the GE72 – that’s upcoming – but just a GPU benchmark to help determine scaling and placement of the 1050 Ti against other notebook GPUs.

Our review of the notebook is forthcoming, as are a few feature benchmark pieces. It’ll be interesting stuff, as we’ve got some key things to point out with this one. Be sure to follow or subscribe to catch that. For today, let’s get into the 1050 Ti notebook benchmarks.

For games, we tested using Metro: Last Light's benchmark on very high & high (tessellation) settings, GTA V on very high and ultra (where applicable) with no advanced graphics, Shadow of Mordor on Ultra, and Black Ops III on High.

All FPS tests were performed three times for parity. These tests were conducted with AC power connected.

The nVidia drivers 372.90 were used on all systems. The newest 382.05 drivers were used on the systems we still have (1050 Ti notebook), but no scaling changes occur with older titles -- it's just necessary for new title benchmarking. MSI Afterburner was used to overclock the GPU core clock and memory clock on applicable systems (the GT72 Dominator Pro G).

We’re starting with a chart overviewing the GTX 1050 Ti laptop’s performance in all the games tested, and then will move to comparative charts versus other GPUs after.

Testing Overwatch at 1080p and with Ultra settings, we land at 92FPS AVG in a match, or 105FPS AVG in our deprecated training mode benchmarks. These are only kept for comparison versus old data, as the scaling is still linear. Our recent Overwatch graphics optimization guide discusses match test methods in greater depth.

For another modern title, Sniper Elite 4 with DirectX 12, Asynchronous compute, High settings, and 1080p resolution places at 54FPS AVG, with lows at 43FPS and 40FPS. This is reasonably playable, given that we’re on laptop-grade hardware and have different tolerances than desktops.

Looking next to GTA V, we’re nearing 60FPS on the 1050 Ti notebook, though lows don’t scale quite as well here as in other games – that’s more of a game-level difference than hardware-level, but the hardware ultimately executes the game. Let’s move on to some comparative charts for the older games.

This is one of the few games where we have every relevant laptop GPU present, so we’ll spend some time here.

Shadow of Mordor is a bit of a throwback, but gives us a lot of data for percent scaling comparison since we used to use this game heavily for benchmarking. As discussed above, the unique challenge with laptop reviews is that we don’t get to keep the notebooks; this means relying on some older tests for regression analysis.

At 1080p with Ultra settings, the GTX 1050 Ti notebook hovers at around 58FPS AVG, placing it approximately 23% ahead of the GTX 970M notebook. The 970M is from before nVidia’s move to drive desktop GPUs in notebooks, hence marking a larger difference than you might see between a desktop 970 and desktop 1050 Ti. The 1050 Ti does well, in this regard. The GTX 1060 MSI GE62VR notebook runs at least 32% faster with its 77FPS AVG, which is also faster than the mobile 980M and the Fangbook’s corresponding CPU.

The big question here, as is always the case with laptops, is whether or not you genuinely need that much performance other than for potential “future proofing” – without comment on that phrase in general. It depends on whether you plan to dock them to higher resolution displays or purchase higher resolution variants, but raw performance isn’t as critical on laptops as other features are, like form factor and battery life.

We’re down to games where we have fewer devices present, but can still start showing differences between the 1060 & 1050 Ti, with a splash of other 900-series laptops.

Black Ops III has always been fairly well optimized, and places the GTX 1050 Ti at 76FPS when running High settings with FXAA. That makes the 1050 Ti about 23% faster than the GTX 970M, and makes the GTX 1060 about 44% faster than the GTX 1050 Ti. Decent scaling there, but it again becomes a question of whether or not you need that power when considering other items in the notebook, like form factor, cooling, and noise.

This is our deprecated Overwatch test. We’ve since replaced it with long match benchmarks, which we detailed in our Overwatch graphics optimization guide. But because we’re comparing against laptops we no longer have access to, we’re looking at these numbers. They’re still accurate with regard to scaling, just a bit higher than what you’d see in a match.

First, a note: We’re expanding this testing and adding a GTX 1070 next, in preparation for more laptop reviews later this year. The full review of the GE72 7RE Apache Pro is forthcoming; you’ll want to stick around for that (follow or subscribe), as we have some key notes on the unit as a whole.

The GTX 1050 Ti does well with gaming when judged from the perspective of being in a notebook. There’s not as much need for more power than what the 1050 Ti can deliver, particularly when considering the potential form factor and battery savings. A lower power unit means lessened requirements on cooling, which means a smaller laptop. Lower power draw is also beneficial to battery life, though a larger form factor unit can compensate for that with a larger battery. Just a bit of a trade.

For light gaming while retaining proper notebook form factor, rather than “desktop replacement” form factor, a 1050 Ti seems well suited. Note, of course, that other specs within the notebook will also dictate performance -- but you can expect scaling around these numbers if working with a modern i7 and 1050 Ti.