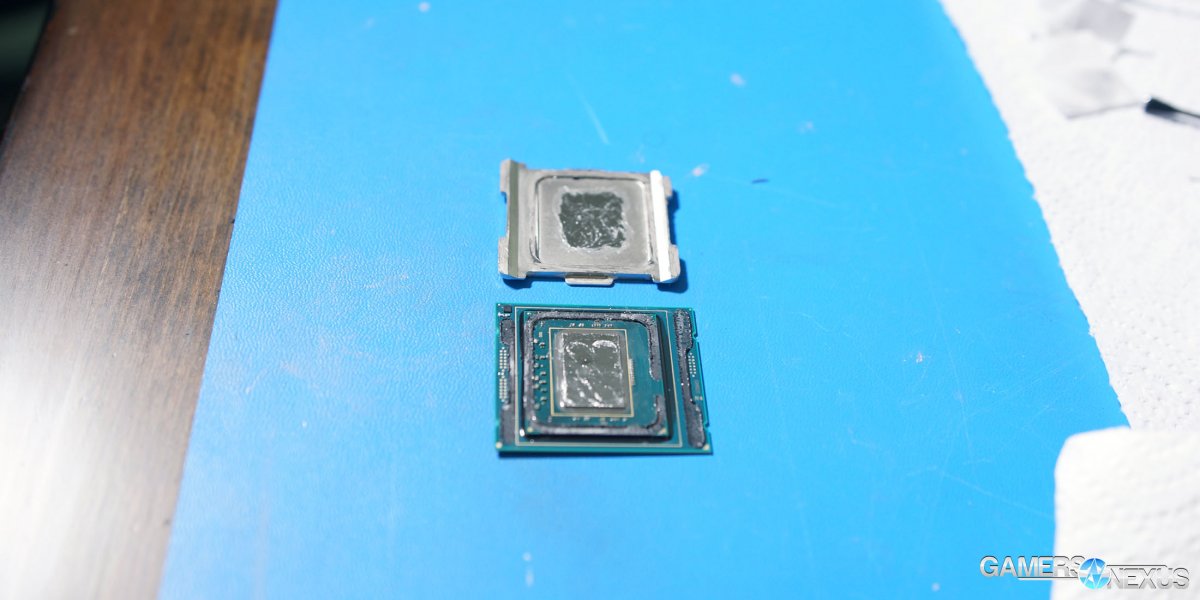 Today's video showed some of the process of delidding the i9-7900X -- again, following our Computex delid -- and learning how to use liquid metal. It's a first step, and one that we can learn from. The process has already been applied toward dozens of benchmarks, the charts for which are in the creation stage right now. We'll be working on the 7900X thermal and power content over the weekend, leading to a much greater content piece thereafter. It'll all be focused on thermals and power.

As for the 7900X, the delid was fairly straight forward: We used Der8auer's same Delid DieMate tool that we used at Computex, but now with updated hardware. A few notes on this: After the first delid, we learned that the "clamp" (pressing vertically) is meant to reseal and hold the IHS + substrate still. It is not needed for the actual delid process, so that's one of the newly learned aspects of this. The biggest point of education was the liquid metal application process, as LM gets everywhere and spreads sufficiently without anything close to the size of 'blob' you'd use for TIM.

We applied too much liquid metal on the first attempt. It formed like a pool, and shimmered when pushed around. As we learned later on in the process, ideal application is to spread a very thin layer of LM (you should see some streaks of liquid, not a pool) across the entire die. The opposing IHS surface should also be coated with LM, but be careful not to coat areas that could end up over SMDs on the board (capacitors, resistors, so forth). We used nail polish to protect the SMDs, as it forms a layer over the capacitors that prevents liquid metal from damaging the parts. We asked friend of the site VSG (of Thermal Bench) why nail polish works so well against liquid metal, to which he noted:

"Nail polish typically has nitrocellulose or another functionalized cellulose in it which forms a thin, stable film without a gap over items such as fingernails, or the capacitors you used it over. A alkyl acetate helps move it into place, and then promptly evaporates leaving behind just the thin film.

"Some nail polish formulations have benzene derivates. Toluene is a prime candidate used by some companies, which does a similar job as nitrocellulose. Look at the composition before buying or using these, as toluene isn't nice to play with even at lower concentrations."

If electrical tape is handy, ideally something that can withstand ~105C, this also works as a solution.

Ultimately, though, it's just good not to use too much liquid metal. Conductonaut is conductive -- go figure -- and will short components that encounter it. We used too much of the Thermal Grizzly solution at first, and pressure from the IHS caused the liquid metal to spill onto the substrate. Fortunately for us, this only came into contact with a capacitor. We had a short, failed to POST, and then removed the CPU and cleaned it. Cleaning off the excess resolved the boot issue immediately. Ideally, just use less than we did. As we learned on CPU #2, excess can be fairly easily siphoned back into the syringe whence it came.

As for removing without the syringe, we found a gritty paper towel (or wet wipe) with rubbing alcohol to work well. Q-tips also worked excellently, particularly when coated in a 90% alcohol solution. Be sure to carefully remove all excess liquid metal from the substrate. Q-tips can also be used to spread the liquid metal, just be sure not to use a wispy end with loose cotton strands.