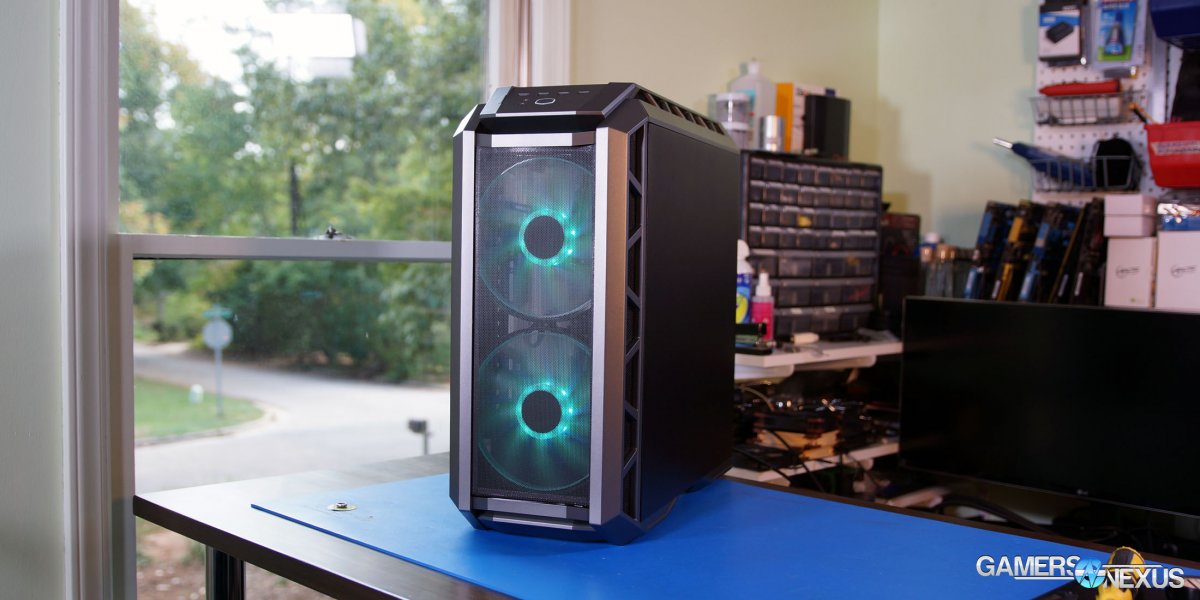 We did this for both the top and the front, with the front also requiring removal of two footing screws. For the front panel, we used a spare magnetic dust filter that was lying around, orphaned from some case review (we think it’s from the Define C, Meshify, or G21), and applied electrical tape for blended-in support. Removing the top panel was even easier. We replaced the top panel’s acrylic with mesh paneling from the Cooler Master C700P (a proper mesh panel, not just a filter), again using electrical tape for a blacked-out proof of concept.

During testing, we ultimately found that the limited pressure of the front 200mm fans meant more air escaped out the top mesh than desired, and so we eventually reverted the top panel to its solid acrylic. The mesh front panel worked well when coupled with a solid top panel, and resulted in the best thermal results.

Please note: These results are not comparable to our initial review, because we are using different testing methods and data averaging methods. We changed our test methods for the H500P radiator placement guide to improve data resolution and averaging accuracy for high-performance systems. This minimizes our variance / uncertainty. Since this test, we have also modified a few other conditions of testing, which means that the previous metrics (including the 12-13C front panel removal metric) are not comparable. We retested that, too, just to establish a new baseline. 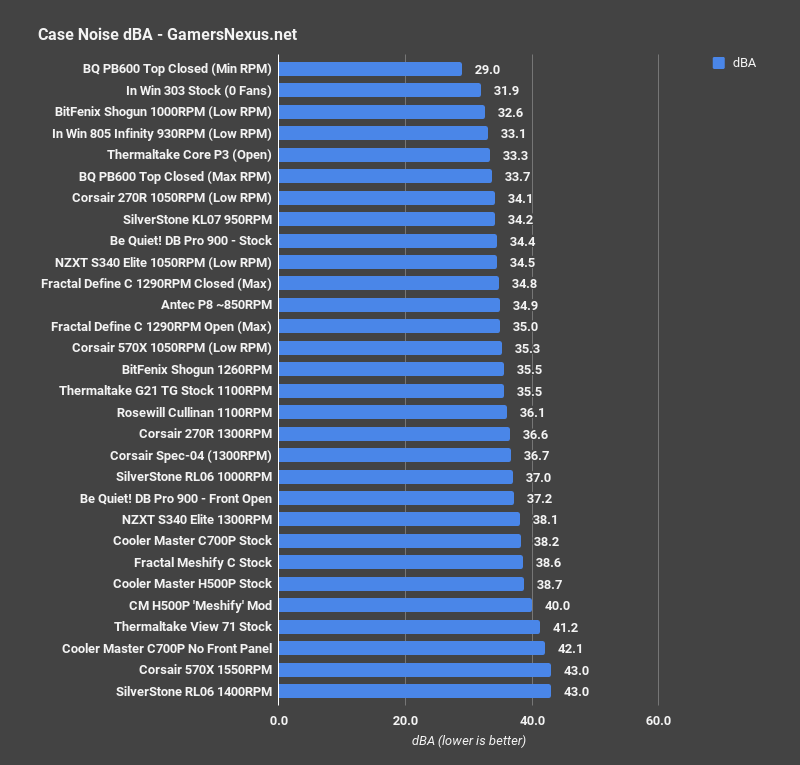 Stock-to-stock, we only measured a ~1.3-1.5dBA difference between the panels. The stock H500P measured at 38.7dBA with our test system, with the mesh mod measuring at ~40dBA under the same conditions. There is not really an appreciable noise increase with this mod.

Before showing the chart, note that the data is not comparable to the previous data, as we decided to switch-over to a different test setup, averaging solution, and monitoring tool. For this reason, we retested the case in both stock and stock w/o front setups, just to re-establish bounding boxes. 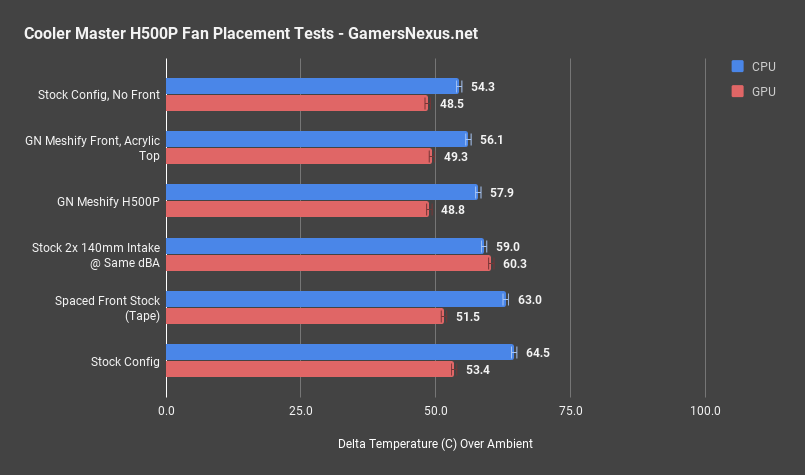 Our thermal chart is flanked by stock configurations, defining our bounding boxes for the mesh mod: In the worst case -- the stock configuration -- we're at 64.5C over ambient for CPU load temperature, or 53.4C for GPU load temperature. Removing the front panel gets us down to 54.3C for the CPU and 48.5C for the GPU. This marks a maximum improvement of about 10 degrees on the CPU, or about 5 degrees on the GPU. If we can get close to this with our mesh mod, we're doing pretty well.

For the completely meshified H500P, with both the front and top panel converted to mesh, we end up at 57.9 degrees on the CPU and 48.8 on the GPU. This isn't particularly exciting, marking only a 6.6-degree improvement in CPU thermals, or 4.6 degrees on the GPU.

Waving a hand over the top mesh revealed that much of the cool air was escaping, because it doesn't have enough pressure to make it into the CPU fan. We restored the top panel back to its original acrylic configuration, then re-ran the test.

The result was noteworthy: Our CPU is now at 56.1 degrees, for about a 2-degree reduction. GPU thermals are roughly the same, at 49.3 versus 48.8 -- this is within our test resolution. We are now within a couple degrees of completely removing the front panel, but have a solution for dust and visuals. Not a bad trade. 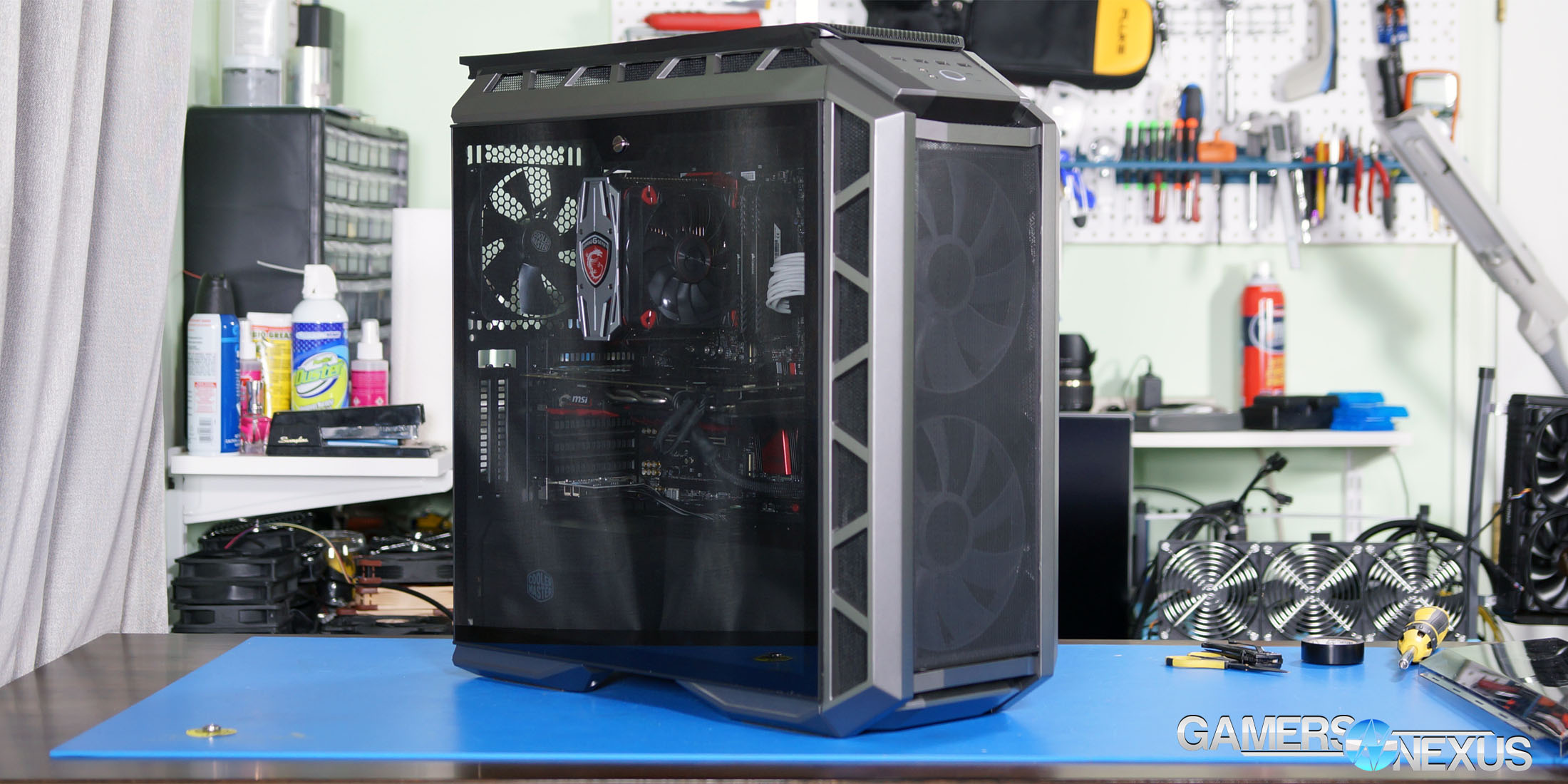 Overall, we’re happy with this mod. It’s what the H500P should have been. When building marketing around 200mm fans, it’s probably a good idea to expose more than 10% of the blade to air. This mod accomplishes that. A Cooler Master representative did hint that the company intends to listen to the wants of consumers, and we take that to mean potentially mesh versions of the H500P – or mesh panels sold separately.

That said, you could do this mod now and have it finished in 20 minutes. Just grab a magnetic dust filter and some tape. The case is on Newegg here, if interested. For further reading and our review, check this way.