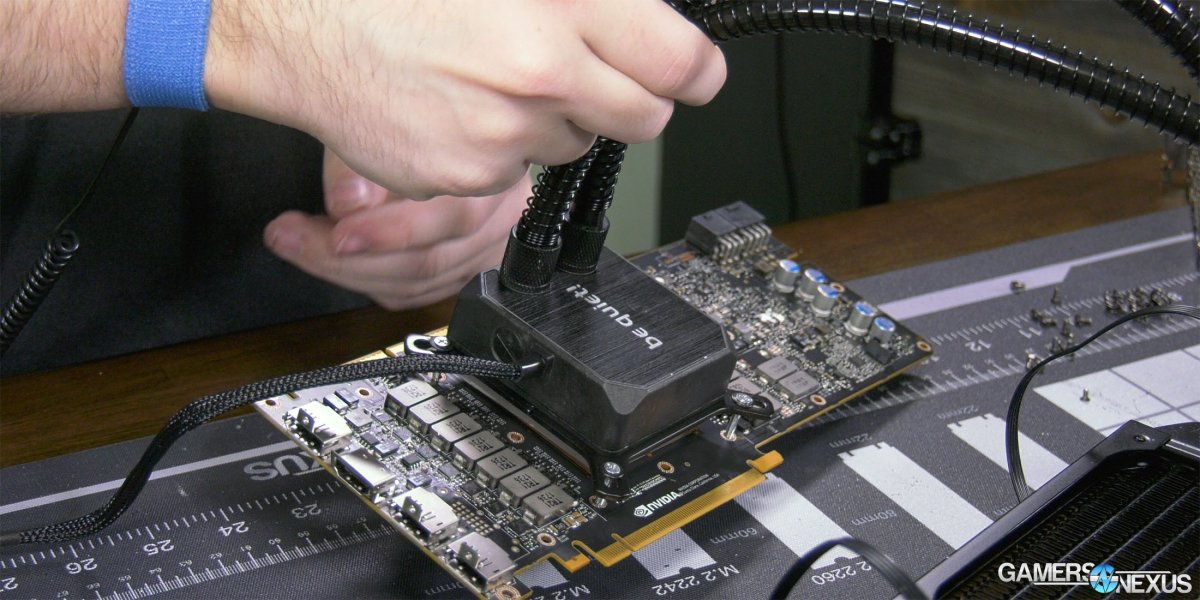 We tried a few things for this mod:

Ultimately, after thinking through all the drill work involved in most of the mods, we realized that our Be Quiet! Silent Loop 280 cooler had longer holes in its mounting plate. Because Be Quiet just clamps down on the holes to lock the screw, rather than placing screw-sized holes in multiple locations, we were able to push the screws all the way inward to fit 70x70 mounting. It just barely fit, and we needed some long screws and a couple of washers, but it came together.

During the process, as shown in the video above, we used a pressure contact paper to ensure enough force was being applied from the cooler to the GPU and HBM. This is a scenario where excess force is deadly, as it can easily crack the HBM on the perimeter of the package. This is a large die, too, which also means greater fragility when under duress. We ultimately routed our screws about 11.8mm through the backside of the card, which gave us enough mounting force to make full contact to the silicon.

Further, we’re leaving the baseplate off: This will allow us access to the shunts and probe points on the card. We want the ability to check voltages during benchmarking, so the backplate must remain off, and we want the ability to short the shunts, so the baseplate must remain off. This will make everything easier to access during benchmarking. For VRM cooling, we can just point some fans at the VRM directly.

Our livestream should start at ~5PM or 6PM EST today, December 16.