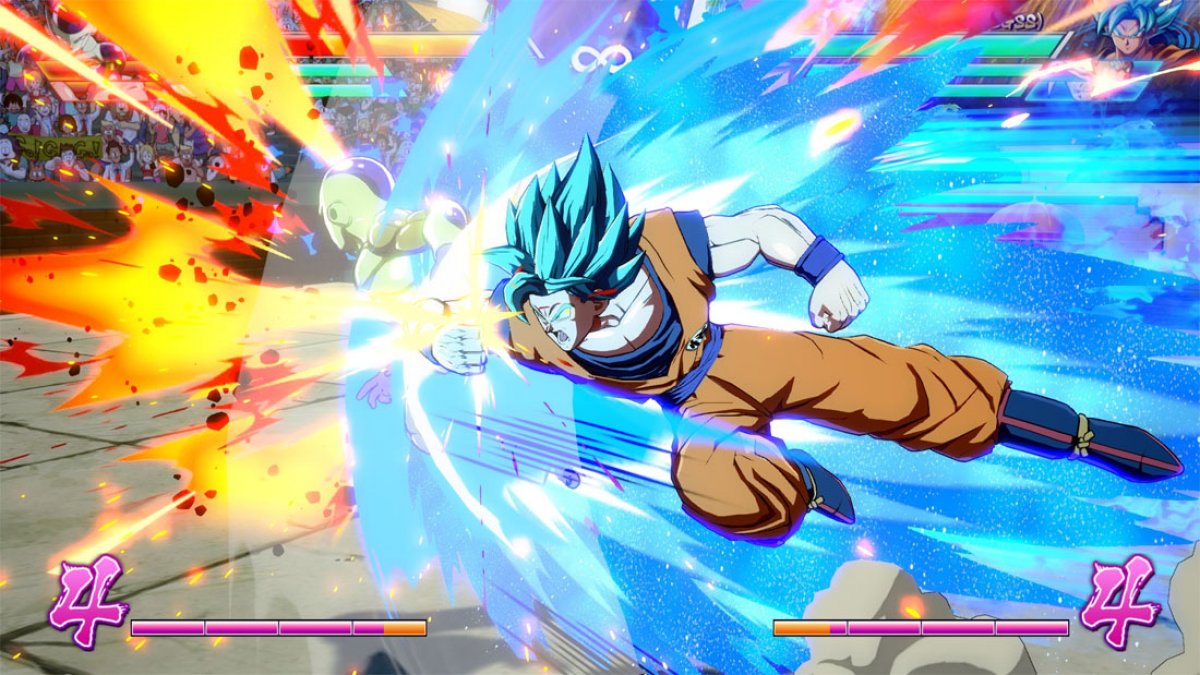 Framerate Analysis of Dragon Ball FighterZ on Xbox One X

Framerate in DBFZ is a tricky subject because of the animation style. Frames are delivered at a constant, reliable 60FPS, but the character “sprites” (really 3D models) update much less smoothly to imitate hand-drawn animation. Camera movement, UI elements, and backgrounds all update every 16.667ms (60FPS), while the characters are animated in intervals ranging from about 100 to 50ms (10-20FPS). That doesn’t affect gameplay at all, it’s just a stylistic choice.

When we analyze console games, we use a capture card to record footage and then use our own software to detect duplicate frames in that footage. We’ve been using an Elgato 4K60 capture card to generate high-quality (but technically lossy) 4K 60FPS files. When we find an unintentional duplicate frame in the footage, it means a new one wasn’t delivered in time, and we can estimate the actual frametime in units of 16.67ms (unique frame = 16.67ms, two consecutive identical frames = 33.3ms, three = 50ms etc.). 30FPS games like Assassin’s Creed: Origins have duplicates every other frame when recorded at 60FPS.

Demonstration of False Positives in Benchmarking

However, with compression and other factors, “duplicate” frames can be slightly mathematically different. There’s a delicate balancing act between detecting the small differences that indicate a new frame and ignoring others. Even then, duplicate frames aren’t due to delayed frames--black screens, pausing the game, and freezeframes when heavy attacks land can all create duplicates. The chart above was generated with sensitivity too low, leading to false positives for duplicates (or false negatives for unique frames, depending on how you look at it). The extra-large spikes come from intentional pauses.

This is a chart based on the same data, but with a higher sensitivity. The spikes correspond to consecutive identical frames, but the majority of them are intentional. The second bump seen above is a legitimate 50ms delay (there was also a 66.67ms freeze as the victory screen popped up, but that’s excusable). This data is from the first story mode fight, which we tested a few times--we never saw more than one tiny delay per test pass, and we didn’t see any delays at all in other tests.

This graph is a more accurate representation of frametimes during gameplay. The data is taken from a match vs CPU, and the two spikes are both black screens between cinematics. There was a ful-lscreen 30FPS animation after a character was downed in one of our matches, but other than that and the occasional black screen between cutscenes, the graphs are a straight 60FPS line.

And that’s the bottom line: Dragon Ball FighterZ runs at an absolutely solid 60FPS at a resolution near enough to 4K to be basically indistinguishable. As always, we’ll be using this data to improve our console testing methodology (that’s why we bothered testing it in the first place), and we’re already working on new visual aids for the next batch of tests.