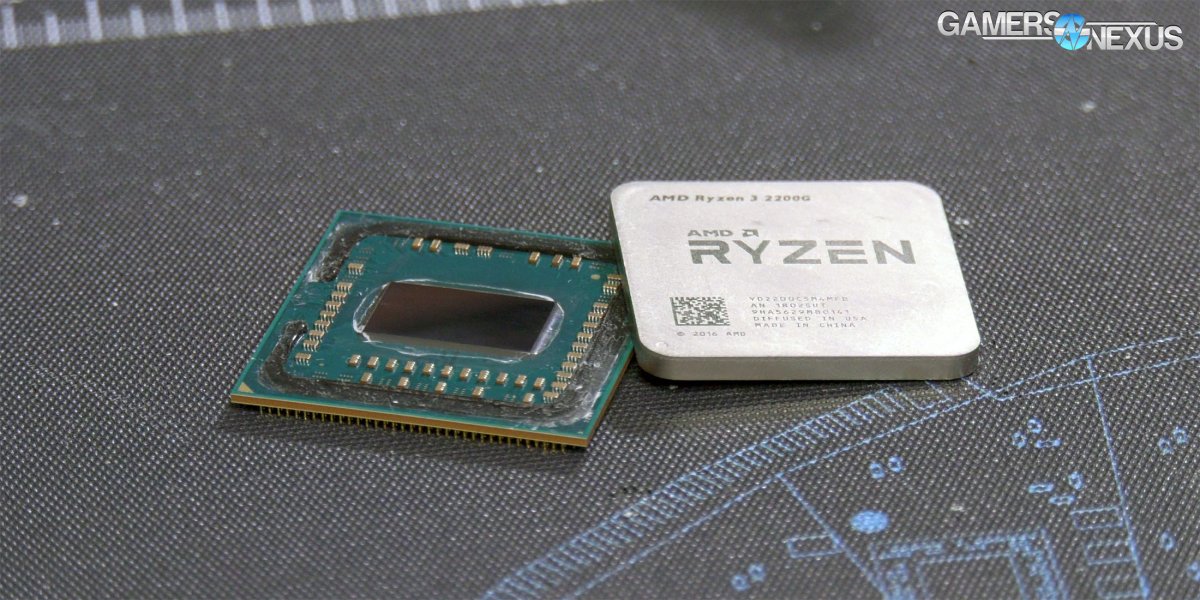 As for being “worth it” to delid, that’s always partly subjective. This is, ultimately, an enthusiast-type job. It’s the kind of thing you might do just for fun. To that extent, we can’t tell you whether it’s worth it; however, there is objective thermal benefit from a delid, as removing half the silicone adhesive (and thermal compound) naturally reduces die temperature (Tdie). The objective benefit permits lowered fan speeds (while retaining the same temperature) for reduced noise, marginally reduced power leakage, higher thermal headroom for lower-end and smaller coolers, and least of all, marginally higher overclock headroom. This starts to become limited heavily by voltage, at some point, as voltage increments upwards of 25-35% can be required to gain traction on the last frequency bump. Delidding won’t bypass that. 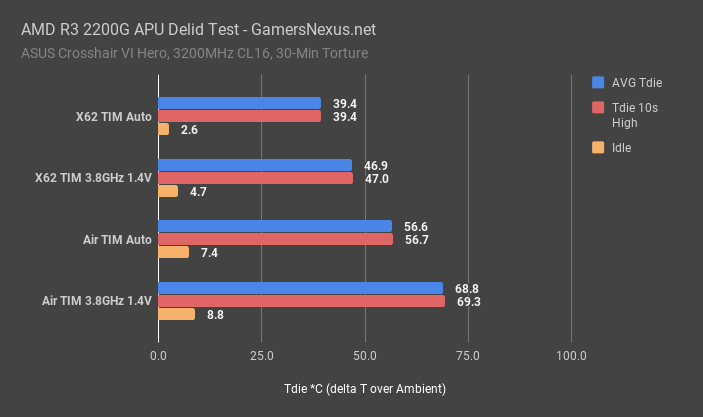 This first chart just establishes our baselines with the stock IHS, before delidding took place. Using the Crosshair VI Hero with full auto settings and a Kraken X62, our baseline for Tdie is 39 degrees Celsius, delta T over ambient, with its 10-second high also at about 39 degrees. We operated at around 2.6C when idle. Manually configuring the CPU to run at 3.8GHz and 1.4V gave us a core temperature of 47 degrees over ambient, which was about 25 degrees during all tests, increasing our temperature over baseline by about 7 degrees. Idle is subsequently higher, running at about 4-4.7 degrees.

The air cooler ran at about 56-57 degrees over ambient – that’d put Tdie at about 81 degrees for the reported temperature, with the 3.8GHz and 1.4V configuration failing to complete the test. The CPU measured at 69 degrees before a thread failed, at which point we consider the test incomplete. We weren’t able to achieve stability with this high of a voltage, despite the frequency not really being overclocked in any meaningful way. Subsequently, we also disabled the cooling fan momentarily to determine TjMax, or the temperature at which thermal protections are enacted, which is about 95 degrees Celsius Tdie. If we add our ambient of about 25 degrees back to our Tdie of 69, we’re at 94C, which happens to align with TjMax. 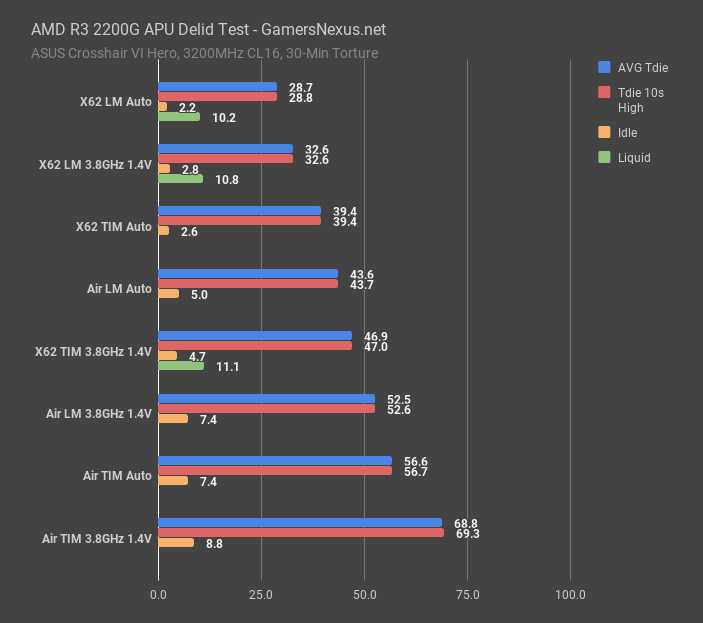 Moving to the delidded thermals and Conductonaut application, but still using our standard test paste on the IHS, we immediately see a 14-degree reduction in temperature between the X62 TIM 3.8GHz / 1.4V line-item and the X62 liquid metal line-item of the same frequency and voltage. The delidded variant, using Conductonaut, operates at 32.6 degrees over ambient, versus 47 degrees over ambient for the default AMD thermal paste. That’s a significant improvement in thermal headroom. Note also that we removed the silicone adhesive from the IHS, but left it on the substrate as a guide for re-mounting the heat spreader. You might gain another degree or two by removing all silicone adhesive, based on our Intel testing, but we find it to be not worthwhile. This is already a major improvement. Idle remains about the same, as expected. Liquid temperature is also functionally equivalent and within error margins.

For the auto test with liquid metal, which operated at nearly an identical power load, we observed a 28.7 degree over ambient core temperature, marking an 11-degree drop from the stock thermal paste.

With our air coolers, the auto configuration drew only a couple watts more than the thermal paste test, entirely within variance, but still managed to perform at 43.6 degrees delta T over ambient. Comparatively, this puts the stock air cooler at a reduction of roughly 13 degrees, versus the baseline stock TIM from AMD.

With the air cooler running on the 3.8GHz, 1.4V overclock, performance reports as 52.5 degrees over ambient for the liquid metal version, or 69 degrees for the stock paste. That’s a 17-degree difference, and was enough of a change that we were actually able to fully survive the 30-minute test pass when using liquid metal, despite failure with the stock APU thermal interface material. 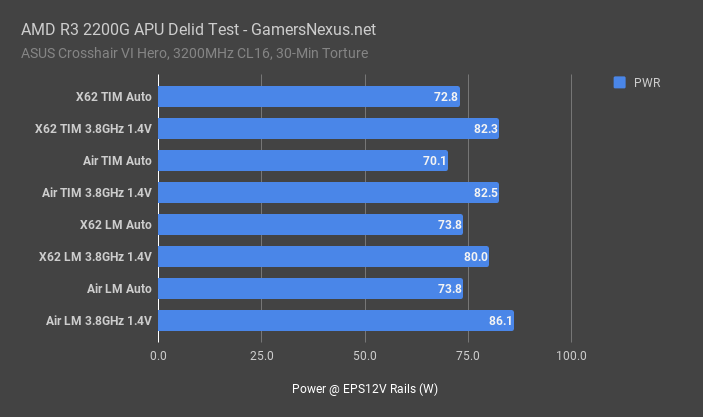 As for power, this chart illustrates the power consumption for a delidded and stock test pass, which ensures that we’re pulling the same current at the EPS12V rails for each test. This is part of our means to validate that our test data is accurate. You can find more of this discussion in the article below. We’ll also include a power chart in the article for test validation purposes.

Conclusion: Is Delidding an AMD APU Worth It?

This is ultimately a somewhat risky endeavor. There are no pre-made, fool-proof tools from the likes of Der8auer and Rockit Cool. Our process involved a vise a razor, and a test bench to pre-heat the silicone adhesive. It did work, and the differences are significant. This would primarily allow reduced fan speeds, or using a smaller and lower-powered cooler to achieve the same effect. Just like with Intel’s CPUs, this change isn’t “necessary” by any stretch of the word – but it certainly helps reduce cooling requirements, which can reduce investment, cooling space needed, or noise levels from lowered fan RPMs; of course, the change can also help provide more thermal headroom for an overclock, though the impact there is likely less significant.