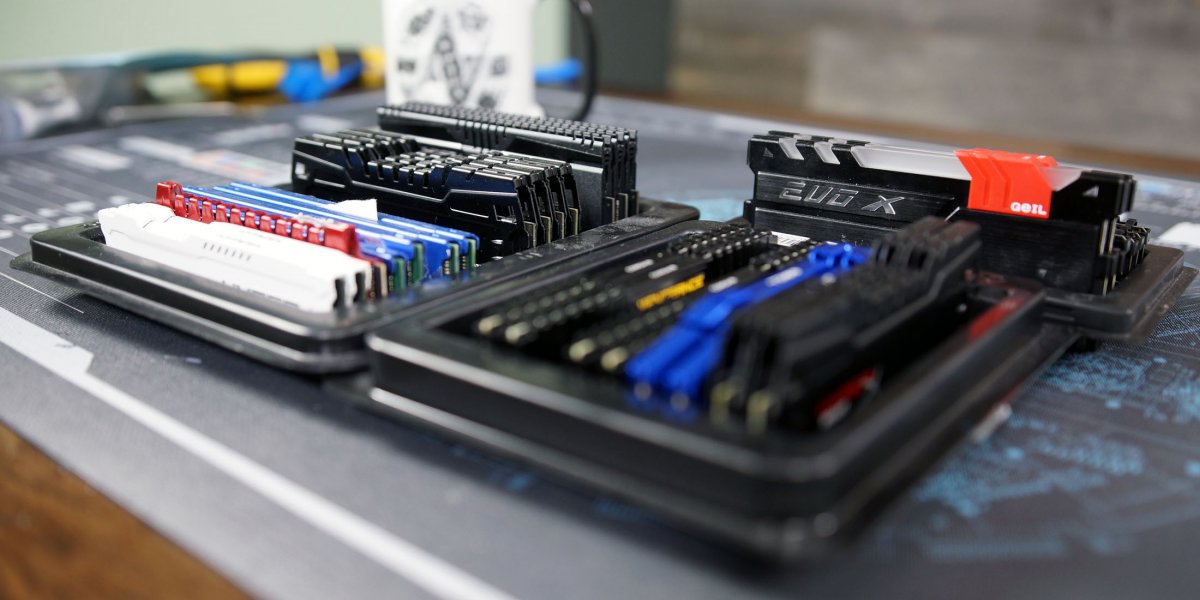 CPUs with integrated graphics always make memory interesting. Memory’s commoditization, ignoring recent price trends, has made it an item where you sort of pick what’s cheap and just buy it. With something like AMD’s Raven Ridge APUs, that memory choice could have a lot more impact than a budget gaming PC with a discrete GPU. We’ll be testing a handful of memory kits with the R5 2400G in today’s content, including single- versus dual-channel testing where all timings have been equalized. We’re also testing a few different motherboards with the same kit of memory, useful for determining how timings change between boards.

We’re splitting these benchmarks into two sections: First, we’ll show the impact of various memory kits on performance when tested on a Gigabyte Gaming K5 motherboard, and we’ll then move over to demonstrate how a few popular motherboards affect results when left to auto XMP timings. We are focusing on memory scalability performance today, with a baseline provided by the G4560 and R3 GT1030 tests we ran a week ago. We’ll get to APU overclocking in a future content piece. For single-channel testing, we’re benchmarking the best kit – the Trident Z CL14 3200MHz option – with one channel in operation.

Keep in mind that this is not a straight frequency comparison, e.g. not a 2400MHz vs. 3200MHz comparison. That’s because we’re changing timings along with the kits; basically, we’re looking at the whole picture, not just frequency scalability. The idea is to see how XMP with stock motherboard timings (where relevant) can impact performance, not just straight frequency with controls, as that is likely how users would be installing their systems.

We’ll show some of the memory/motherboard auto settings toward the end of the content.

The kits we’re testing include the following:

All kits are being tested in 16GB capacities (2x8GB sticks).

We are using the following motherboards:

Other testing information was discussed in our GT 1030 & R3/G4560 testing previously.

No overclocking is applied. Unless otherwise stated, we are simply applying XMP and letting the board & memory do the work. The goal is to test how each behave when left to this simple user scenario. 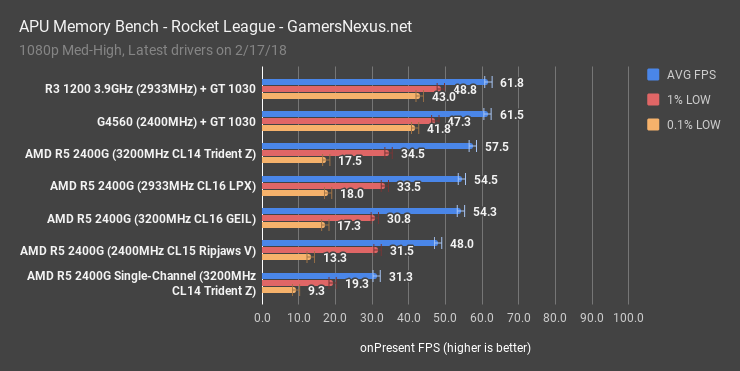 Rocket League at 1080p and High-ish settings will start us out: For this one, our R5 2400G operated a 58FPS AVG with 3200MHz CL14 Trident Z memory from GSkill, with 0.1% lows tagging along at 18FPS. The GT 1030 and G4560 would be a good baseline here, performing at about 62FPS AVG, but with significantly improved frametimes.

Keep in mind that our focus today is on memory, so we’ll get to APU overclocking in a later content piece.

Getting down to the memory comparison on the R5 APU, the next-best performing kit was our Corsair LPX memory that AMD provided with the R7 last year, operating at 2933MHz and CL16. The next one down was our GEIL kit, provided by AMD for the R5 launch, operating at 3200MHz and CL16. In this instance, however, there’s more different than just the top-level CAS timings. We’ll get to those toward the end of the content, as it’s decidedly more “boring” than FPS numbers, for most.

Anyway, scalability has us ranking the Corsair LPX and GEIL kits within margin of error of one another – effectively equal in performance. The 2400MHz CL15 Ripjaws V memory operated at about 48FPS AVG, marking the top-to-bottom range of performance as about 9FPS between the Trident Z and Ripjaws kits. That plants the 3200MHz CL14 Trident Z kit as 19.8% ahead of the Ripjaws kit. The Ripjaws unit also dropped frametimes further, landing at 13FPS 0.1% lows.

Finally, our single-channel test takes the best kit – the Trident Z CL14 memory – and tests it with only one channel firing. This lands us at 31FPS, placing the dual-channel Trident Z kit about 80% ahead in performance. We nearly double performance by adding a stick of memory. So far, with only one data point, it’d look like builders of APU systems will definitely want to go dual-channel, even if it’s a couple dollars more.

For DOTA2, we test at High settings and 1080p using DirectX 11. Note that AMD Ryzen CPUs have traditionally fallen behind in this particular game, so we would anticipate that performance behavior would follow-through on Raven Ridge. This is more a factor of DOTA2 favoring frequency over threads.

Regardless, our two GT 1030 tests were bound by the GPU, topping-out at 63FPS AVG. The R5 2400G with Trident Z memory maintained an average of 45FPS, with lows somewhat low at 19FPS. The 2933MHz LPX kit falls in second place again, for the second time, with the Ripjaws V kit outpacing our GEIL CL16 memory by a few FPS. The stack places the Trident Z and LPX memory as functionally tied and within error margins, with the GEIL kit not far behind. Going single-channel nuked performance, bringing output down to 25FPS from 45FPS, granting the dual-channel configuration a 79% lead over the single-channel configuration. Lows aren’t much different, but that’s largely a factor of how this game generally behaves.

For CSGO with relatively high settings at 1080p, the baseline tests operated around 111 to 120FPS AVG, with our highest-performing R5 2400G, non-overclocked, at 95FPS with the Trident Z kit of memory. Note also that the R5’s lows maintain a much healthier number this time, marked at 41FPS for 0.1% low and 63FPS for 1% low. CSGO is fully playable on the R5 2400G and maintains a consistent frame-to-frame interval during gameplay.

The next component was, once again, the Corsair LPX at 2933MHz with CL16 timings, allowing the Trident Z to lead by about 5.9%. The GEIL kit ranks roughly within error of the Ripjaws 2400MHz kit, further demonstrating that this particular kit of memory doesn’t play as well with this specific motherboard. Keep in mind that explicit motherboard tuning for validated memory kits can impact performance, so other boards may behave differently.

Back to the chart, single-channel testing had us at 52FPS AVG, with 0.1% low values significantly reduced – we have more frametime variance here than previously. We’re about 83% ahead with the dual-channel alternative.

Overwatch at Medium is above – more of the same. 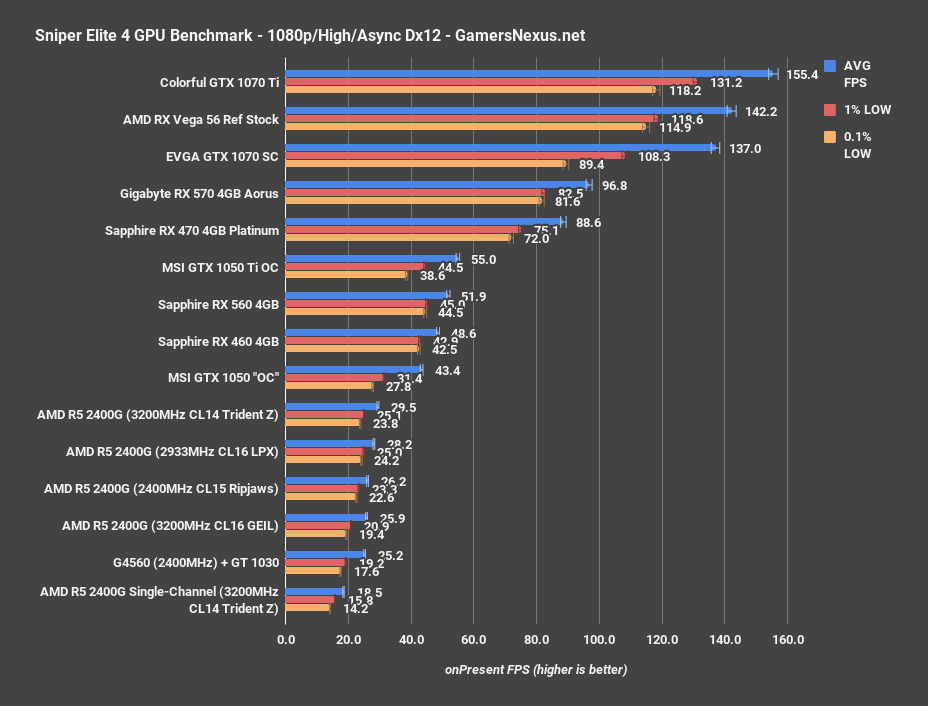 Sniper Elite 4 gives us a DirectX 12 test with Async Compute – and one which has been exceptionally well-optimized, at that. We’re testing at 1080p/High, as that’s what we have the most data for with standard GPU benchmarks. Note that, of course, you’d probably dial-down to medium for actual gameplay. We’re just looking at scaling today, though.

For this benchmark, we observed the 2400G outperforming the GT 1030 and G45560 combination notably, which comes down to an AMD advantage with Sniper Elite’s asynchronous compute pipeline. The Trident Z CL14 kit ranks at about 30FPS AVG, with lows tightly behind, and the 2933MHz CL16 kit nearly tied in performance. We’re beginning to bump against other limitations, here. The CL14 Trident Z kit again lands 12-13% ahead of the 2400MHz Ripjaws V kit, and the GEIL kit again demonstrates poor performance from its auto timings on this board. Single-channel performs significantly behind, as previously. 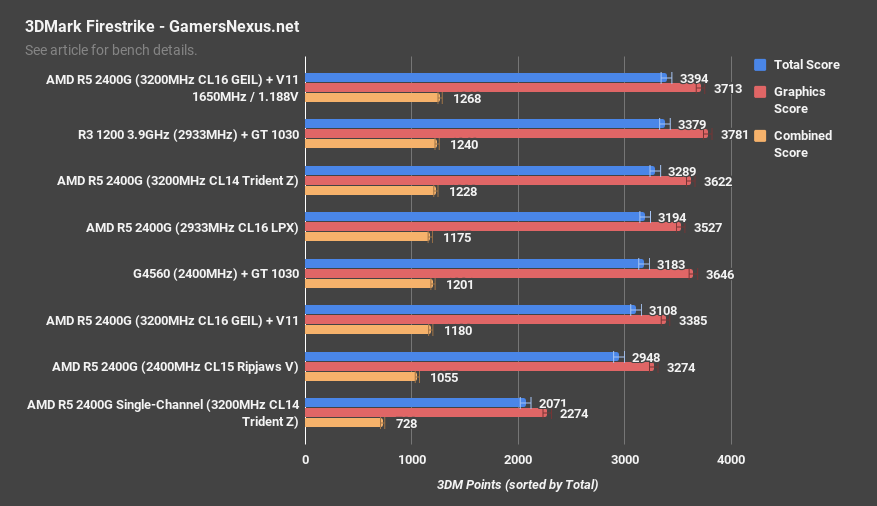 FireStrike gives us a synthetic, recapped look at everything, including a quick test we did with a 1650MHz clock on the APU’s Vega 11 GPU, which roughly equals, or slightly underperforms, against the GT 1030.

As for memory performance, the Trident Z kit lands our total score at about 3289, which is about 3% ahead of the Corsair LPX kit, or about 5.8% ahead of the GEIL kit, and about 11.6% ahead of the 2400MHz Ripjaws V kit. Versus single-channel, we see a marked uplift of 59% in total score. 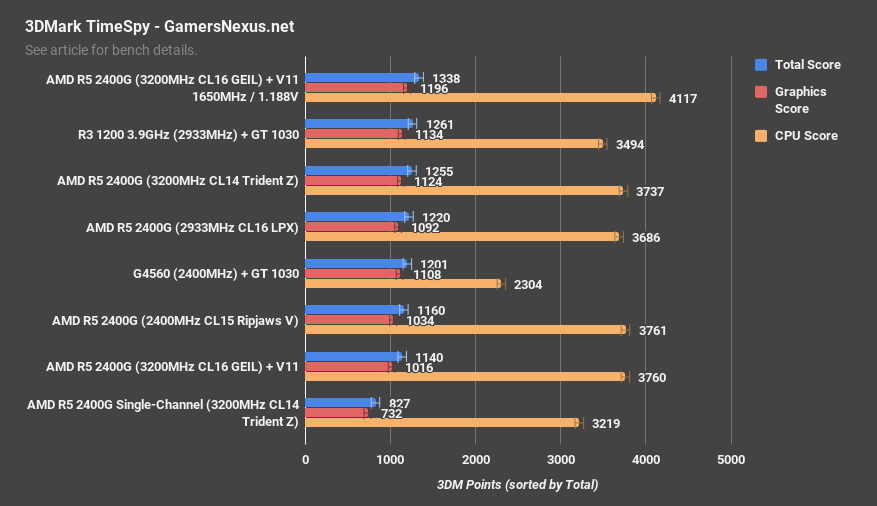 For Timespy, we’ll just briefly mention that the overclocked Vega 11 component does well to place the APU ahead of the GT 1030 build, but we’ll talk about that more in a later piece.

Focusing back on memory, the Trident Z kit places our total score at 1255, which ranks about 11% ahead of the GEIL 3200MHz kit that AMD provided for the R5 review, or about 3% ahead of the 2933 Corsair kit. Single- versus dual-channel once again has tremendous impact on performance.

Let’s briefly talk about motherboard impact on Raven Ridge performance before moving on. Please note that this isn’t crazy in-depth, and we’re not talking overclocking support or VRM performance. The only focus is some quick synthetic tests against the highest- and lowest-performing memory kits. 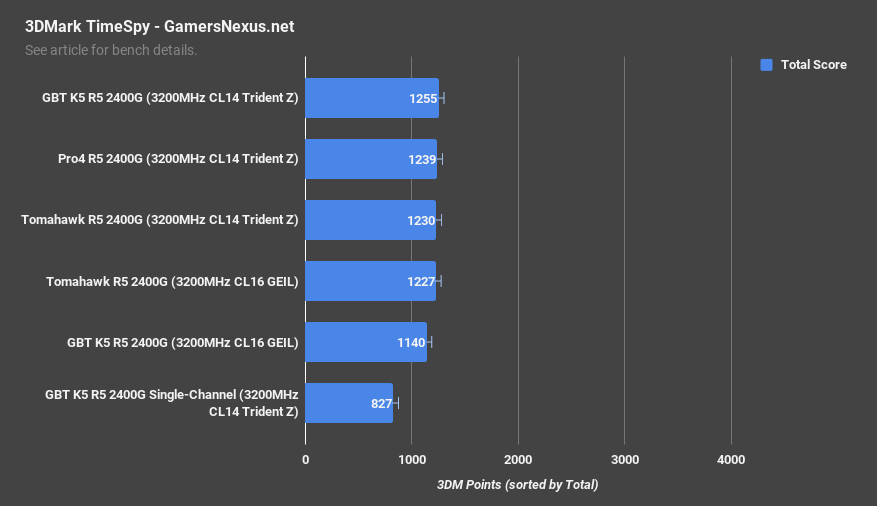 For TimeSpy, the Gigabyte Gaming K5 with Trident Z memory ranked at 1255 for its combined score, with the Pro4 within our margin of error. These two are effectively equal. The Tomahawk scored at 1230 for the Trident Z kit, giving us a top-to-bottom scoring of 2% difference. 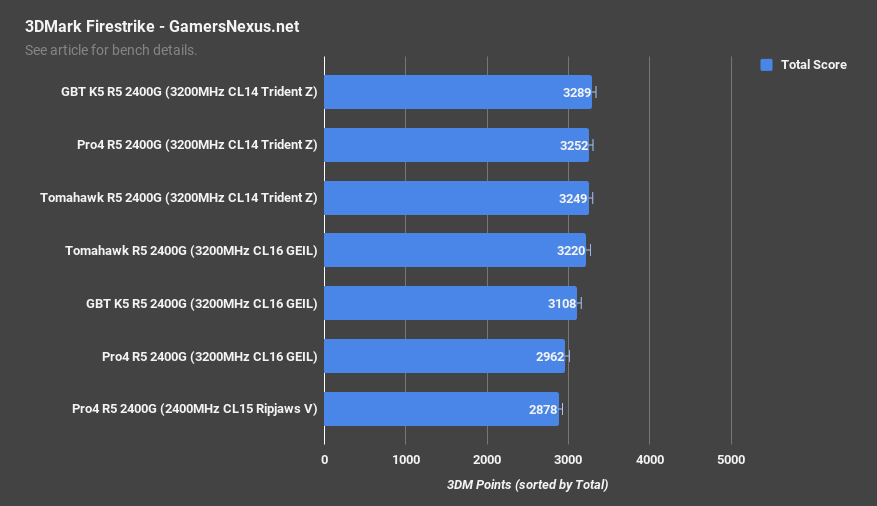 Firestrike positions the Gigabyte Gaming K5 at the top, but also completely within error of the Pro4 – we are within about 1% of performance, and so these boards apply timings in a way that makes them perform functionally equivalently. The Tomahawk B350 board lands the Trident Z kit also close behind. Between these three boards, there’s nothing crazy going on in score.

There is a slight difference in timings, though. Above is a simple spreadsheet on the motherboard auto timings for the Trident Z kit; note that, of course, different memory kits may have very different results, here. The Trident Z kit is fairly popular, and so most boards have explicit support of this memory.

Our main difference is in tRFC, as shown here, though that doesn’t manifest in huge ways in these quick synthetics.

As for memory timing settings on the main Gaming K5 motherboard, we’ll publish those below:

One thing’s for certain: Going with multi-channel configurations is a must on the Raven Ridge APUs – at least, it is for the games we tested. If debating between 1x8GB stick and 2x4GB sticks, go 2x4GB. It will matter in the games we’ve tested, and likely many others. Keep in mind that, as usual, there are about a million variables at play. Switching motherboards, BIOS revisions, or memory kits will impact performance. A lot of the performance testing here is based upon auto XMP configurations, which means that further tuning can be done by the user or the motherboard manufacturers to boost performance. That’s not what our test goal was, though.

Back to the content, though, memory certainly matters – but not every region can spend just a few dollars to go from 2933 to 3200. And besides, even if it’s “only” another $15, that doesn’t make it worth it. As the results show, 2933 can be perfectly adequate and barely disparate in performance; further still, adding $15 means you really might as well re-evaluate whether a dGPU + cheap CPU will achieve the same goals, because every dollar counts in these budget classes. There is no room for being wishy-washy. You either are buying Raven Ridge or you aren’t, and that will be predicated entirely on the budget. Memory is part of the budget.