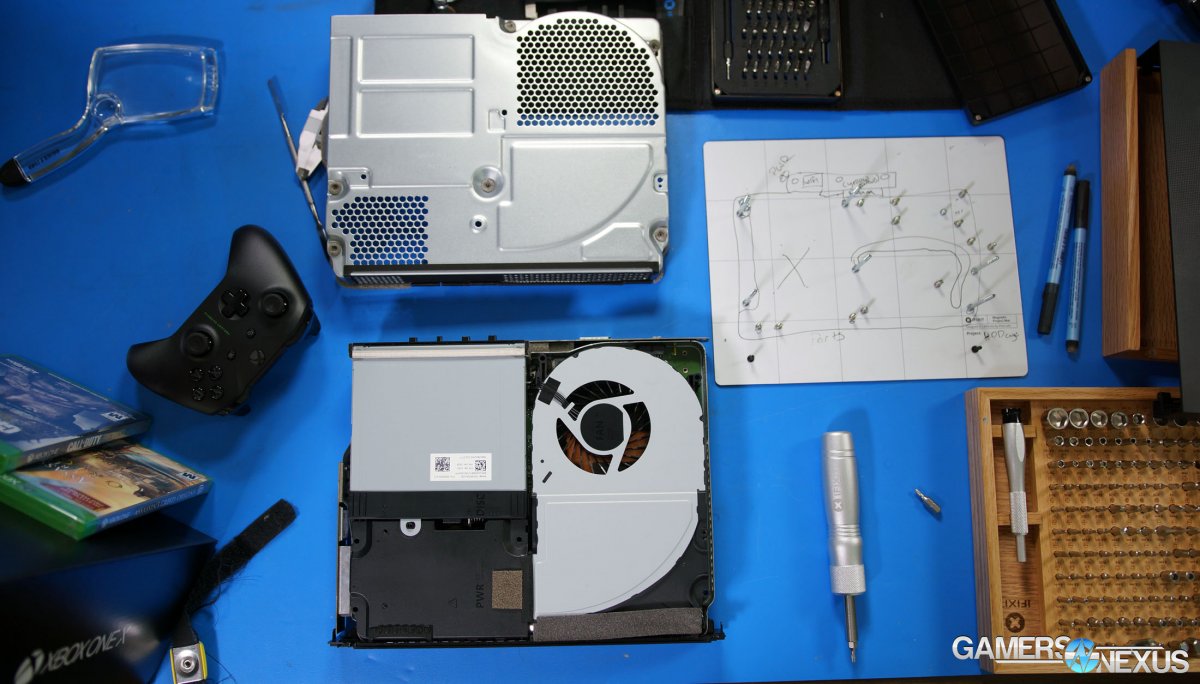 Initially, we had planned to do three tests: one stock, one with the games running off an external SSD, and one with the entire system installed on an internal SSD. The stock and external SSD tests were easy enough, but cloning the Xbox boot drive proved a problem. Cloning is necessary because there’s no official method for transferring and, unlike the PS4, it’s not possible to simply stick in an empty drive. We use Acronis for cloning, which is usually capable of handling transfers from larger to smaller drives, but it wasn’t cooperating. We tried manually partitioning the SSD and copying files over--there wasn’t much chance of this working, but it’s easy to attempt. Sure enough, it didn’t work. It’s absolutely possible to replace an Xbox One’s boot drive with various other solutions, like 1:1 cloning onto a drive of equal or greater size (1TB for our Xbox), or experimenting with the scripts that iFixit links to, but we didn’t pursue them--the whole point of a console is that it’s cheap and convenient, and anyone brave enough to tear apart their Xbox and stick in $300 of flash storage is exiting the core audience. We can revisit this in the future if there’s enough interest, but an external SSD still offers significant benefits.

So, to summarize: logically the best-performing scenario would be to completely replace the HDD with an SSD, but that goes beyond a casual upgrade. The next-best choice would be to plug an external SSD into one of the the USB 3.0 ports on the console as Microsoft intended, so that’s what we did. USB 3.0 technically has a lower transfer rate than SATA III, but an SSD using USB 3.0 is still far faster than a 5400RPM HDD using SATA III. 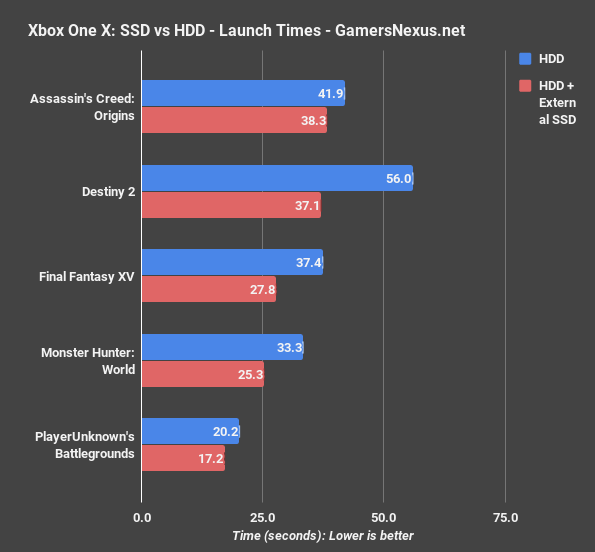 We tested five games, a mix of titles we’ve already benchmarked and ones we might in the future. Launch times were measured from the time the game was selected to the first onscreen button prompt (e.g. “press A to continue”), except for Destiny 2, which was measured until the “SELECT CHARACTER” text appeared. Some variance can be expected depending on how long server connections take for the multiplayer games, and test-to-test variance for Monster Hunter and PUBG was a bit higher in this test than the others. On the other hand, Destiny 2’s launch times were extremely reliable, and the SSD shaved off nearly nineteen seconds (33.7% reduction). 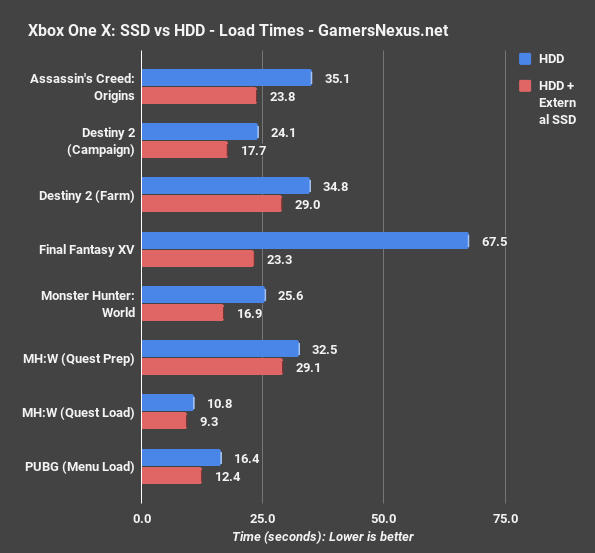 Four of the games we tested had save files that could be loaded, and all of them benefitted from an SSD. For the Destiny 2 “campaign” test, we used a character that had partly completed the first mission of the campaign so that they would load directly into gameplay. For the “farm” test, we timed launching into the farm hub level from orbit. FFXV clearly has the most to gain from an SSD, with a load time reduction of 65.5% that saves 44.2 seconds--not counting the time saved launching the game. FFXV load times are notoriously bad, and this doesn’t bode well for PC players that don’t have 100+ GB to spare on their SSDs.

PUBG doesn’t have a save file to load, but it does have something we’ve complained about in the past: obnoxiously slow texture pop-in. The easiest place to measure this is in the main menu, but our avatar’s three second transformation from oily hot dog man to fully-textured human wasn’t improved enough to be reliably measured. The time from the end of the previous test period to the final texture pop (called “Menu Load” above) was reduced by a few seconds, but most of the time saving happens before the character appears on screen. We considered testing texture load times ingame, but it’s hard to create a reproducible test, although this was a large part of why we wanted to try an SSD in the first place. The bottom line is that an SSD won’t solve the pop-in and it’s still very noticeable.

There are three Monster Hunter times logged on this chart due to the nature of the game. The first is just the regular load time, or how long it took us to load from the main menu into the hub level. Capcom’s servers were helpfully busted during testing, so we were able to play offline. The next period is the “preparation” phase of a quest. This would normally be when matchmaking happens and party members join, but it still took a good 30 seconds when choosing a single player quest in offline mode, so some kind of loading is happening here--this had a lot of variance run to run. The final period is between departing on the quest and actually appearing in the new level. Of the three, the initial load time was the most reliable, and it with an SSD it was reduced by 33.8% over HDD load time.

Using an external SSD with an Xbox One X is extremely simple and easy, and the results are well worth it for games with long load times like FFXV, and even games without long load times opened faster. There isn’t a hard rule for what percent performance is improved, though, as it depends heavily on what operations are being performed.

It’d be great if there were a convenient way to swap out the preinstalled drive or create a new boot drive. It is possible to clone the stock drive to an SSD, and a Google search turns up plenty of people who have already done so, but the lack of an official upgrade method will look bad if Microsoft ever sells an Xbox One SKU with an SSD or 7200RPM drive.