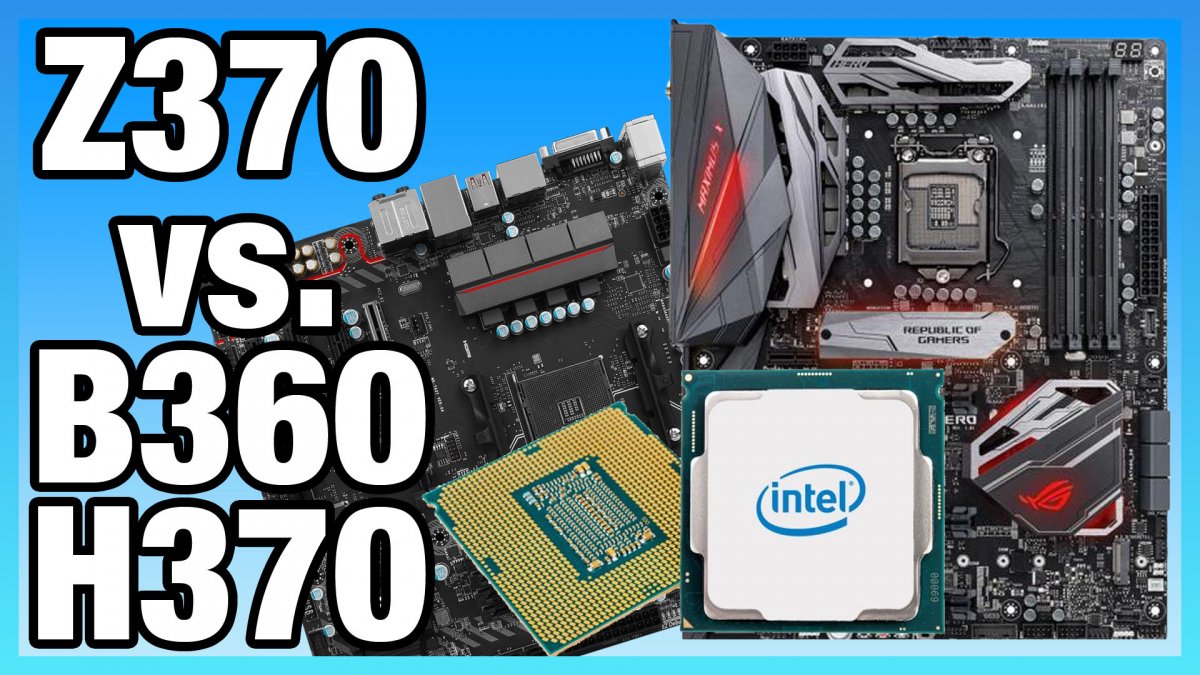 Another point of comparison between Z370, B360, and H370 is memory frequency support, where the B360 and H370 boards become locked at 2666MHz. Z370 could achieve upwards of 4000MHz, depending on board, and can easily drive 3200MHz as a baseline. Our previous testing illustrated that 2666MHz memory on the i5-8400 is just fine, and that at most, the sacrifice of gaming performance tends to sit around ~5-8% (worst case). You’d be better off prioritizing the required spend for 3200MHz + Z370 on a better CPU or better GPU, as those gains will rapidly exceed the mixed and oft-meager framerate improvement of 3200MHz vs. 2666MHz memory.

Ultimately, B360, H370, and Z370 should perform equivalently when tested under identical conditions. Performance differences between Intel chipsets, assuming equal test conditions and single-GPU configurations, should primarily exist when motherboards tune for memory kits differently. A brand new MSI B360 Mortar motherboard would assuredly have worse memory timing tuning than market mainstays, like the Gigabyte Z370 Ultra Gaming or ASUS Z370 Maximus X. It takes time to tune memory, and seemingly small subtiming differences can impact performance to the tune of 5% rather easily – tRFC is a great example of this.

Separately from this content, we also previously benchmarked MCE (Multi-Core Enhancement) performance on different motherboards – check that content here to get up to speed on today’s post.

Below are the test configurations for each venture: 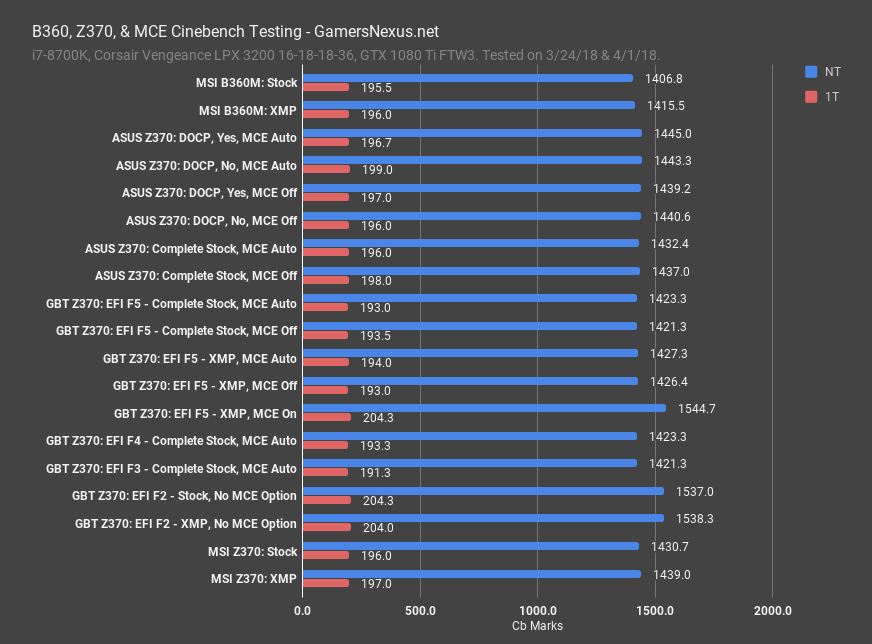 Starting with Cinebench scores, the MSI B360 Mortar had no MCE options to speak of, so performance testing was simplified: We tested with XMP and with stock settings, and that was it. No other BIOS changes.

This chart compiles a lot of the Cinebench results from our previous MCE testing, which you can find already uploaded to the channel. If any of these numbers confuse you, check the previous video.

The MSI B360 Mortar board posted a score of 1416 with XMP on, or 1407 with complete stock settings. Single-threaded performance was 196 on both settings. Compared to other boards we previously tested, we’re about 10-20 points lower than multi-threaded XMP performance, with single-threaded about the same. As for why that happens, it’s nothing to do with the chipset.

This entirely comes down to the motherboard, not the chipset. It’s out of Intel’s hands, at this point. When we looked closer at the B360M’s lower-level memory timings, we saw a few items were tuned unoptimally for our memory kit. This isn’t the first time we’ve seen this. It amounts to board vendors pushing BIOS updates after launch. If you’ve ever scrolled through a list of BIOS updates 6 months to a year post-launch, you’ve likely seen half-a-dozen entries that just list “improved memory support” as their upgrades. That’s where it comes in. tRFC and tREFI are two of the commonly looser timings in boards when a particular kit hasn’t been optimized for. 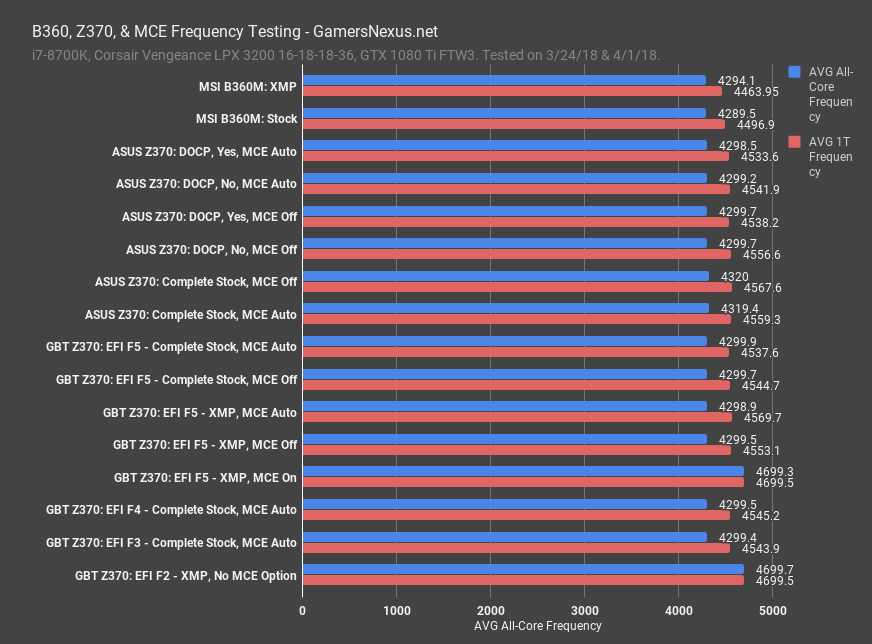 As for frequencies, they’re more or less the same – which is why we can point at memory timings as the primary differentiator in performance. The B360 Mortar averages 4294MHz core frequency with XMP on, which is within reason of the usual 4299MHz. Single-thread frequency was 4464MHz to 4500MHz, which is also within reason. There’s no meaningful frequency deficit, here; the differences, again, derive from memory subtimings and other platform tuning on a new motherboard. 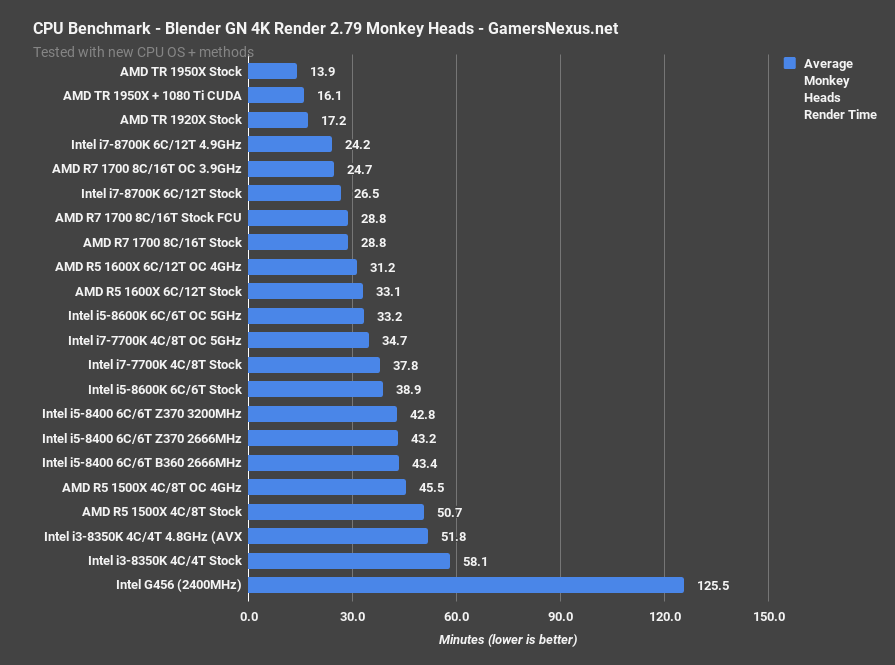 Moving on to some real testing, our Blender scene rendering results show how little difference there is: with version 2.79 and using the GN Monkey Head test, the 8400 CPU with 3200MHz memory, tested on the Ultra Gaming Z370, completed its render in 42.8 minutes. Dropping to 2666MHz memory on the B360 platform rendered in 43.4 minutes. Dropping to 2666MHz memory on a Z370 platform rendered in 43.2 minutes. These differences are from the change in frequency, not board. 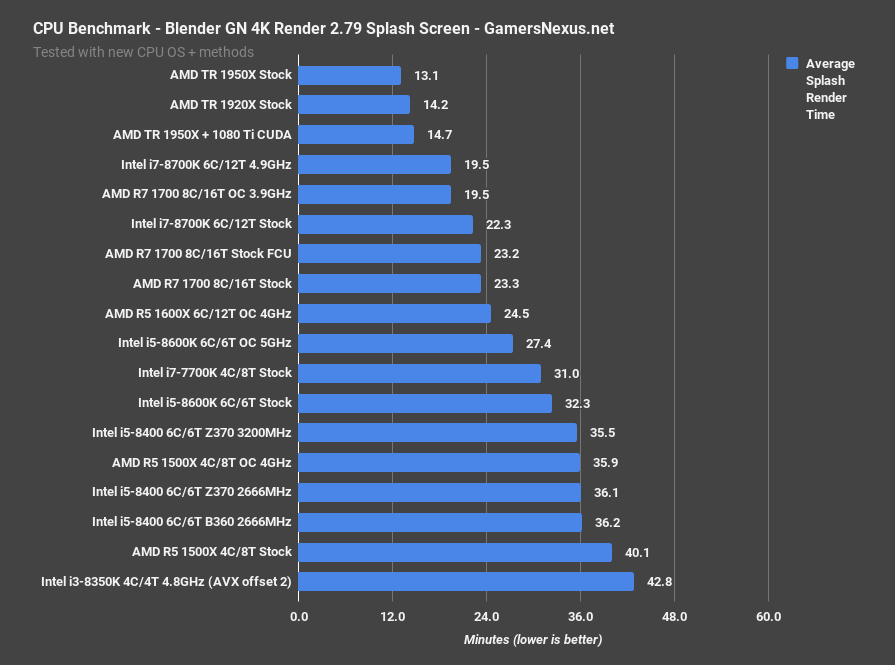 Once again, the differences will entirely boil-down to that table at the top of this article: Anyone overclocking or opting to actually leverage their K-SKU CPUs should clearly buy Z370. There is no alternative.

Anyone who doesn’t care about these options and intends on using a single-GPU, and won’t need more than 24 HSIO lanes, should consider B360 chipset motherboards. The savings and value of B360 boards can be worthwhile (assuming a non-garbage-tier board) for CPUs akin to the Intel i5-8400.

That’s really all there is to it. It’s as simple as this: Are you overclocking? If yes, buy Z370. If no, it’s sort of irrelevant insofar as outright performance of the CPU. Memory limitations can have some impact, yes, but not typically greater than 5-8%. The required money for Z-series or higher-frequency memory parts exceeds the money required for CPU and GPU upgrades that’d outstrip the memory and platform upgrade.