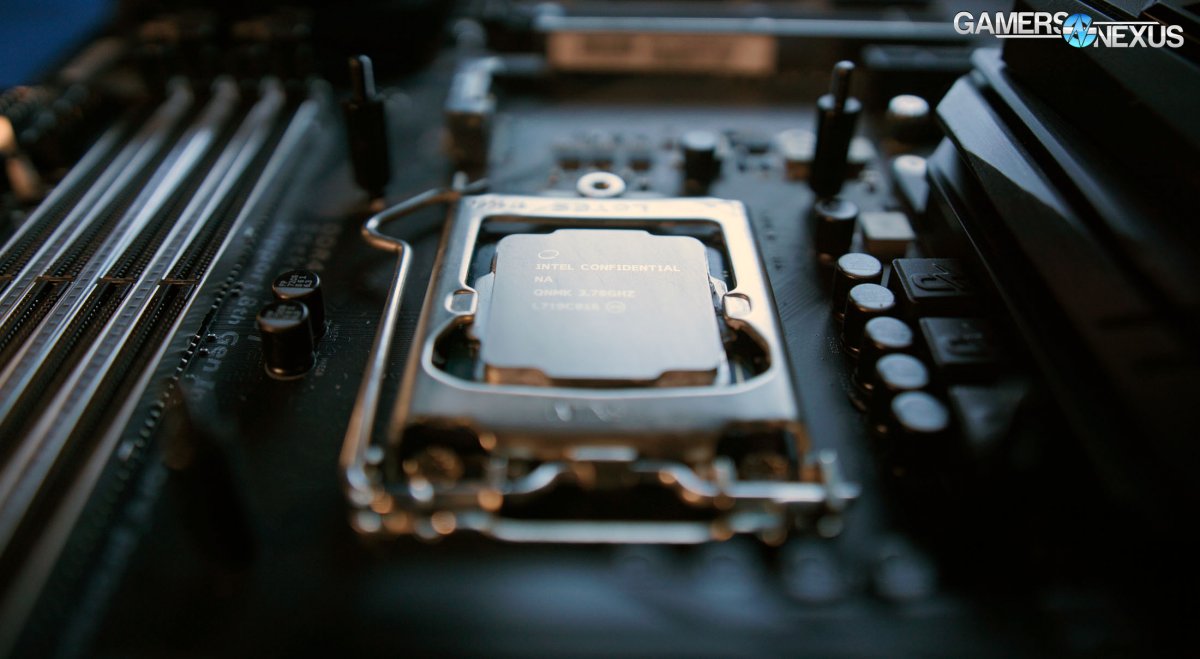 These videos are 100% real – we are using real project files from real projects that we rendered and uploaded to our YouTube channel. Each video tested is as presented in the final output to the channel, including render settings. Again, this testing was primarily conducted for our own interests, but we hope that some of you can benefit from what we’ve learned.

During testing, we noticed that GPU usage skyrockets during chart-heavy videos (like our component reviews), but that CPU usage took over during a-roll intensive segments. “A-roll” would be anything where a host is presenting on camera, whereas “b-roll” is overlaid footage (often a trick to cover cuts or re-takes of a segment, but also used to give context to discussion). Anything involving raw b-roll or a-roll, excepting lumetri color correction, seems to lean intensively on the CPU during rendering. As an example, we noticed TR 1950X utilization dropping from ~94% to ~44% during charted segments, while GPU utilization jumped from ~40% to ~88% (on a 1080 Ti) during those same segments. On an i7-8700K, the same observation pointed toward additional IGP load in conjunction with the increased CUDA load. This “stacked” to some extent, granting greater overall rendering speeds.

For testing, we’re rendering several clips at 4K60 and 53Mbps, with one rendered at 1080p60 and 22Mbps. This gives us a wider understanding as to the areas where IGP acceleration would help versus providing no value. We also tested some FX impact on rendering times, ultimately concluding that most impact was during live playback and scrubbing, not in rendering at the pipeline’s conclusion.

We’ll start with a rendering of our Intel G5600 review, a 16-minute video that uses color correction and adaptive noise reduction. The Intel i7-8700K isn’t impressive when looking at the older method of software rendering, and proves to be the slowest of all CPUs tested. The stock 8700K takes 46 minutes, or about 12% longer than the R7 2700X stock CPU. When overclocked to 5GHz, it’s still at 43 minutes – an 8% reduction in time required, but still slower than a stock 2700X.

Using hardware encoding pushes work to the IGP, which is typically left completely unused when leaning on a dGPU for CUDA acceleration. The integrated graphics processor in the 8700K accelerates our rendering to 32-33 minutes, a reduction of 30% in time required to render. This is also 20% shorter in render duration than the 2700X stock CPU, resulting in a complete shuffling of the leaderboard.

For high-end parts, specifically for purposes of our rendering workstations, this basically invalidates both the Threadripper 1950X and Intel i9-7980XE; technically speaking, both are faster than the 8700K – but not proportionately to the price. The 1950X is functionally equivalent in render time, with stock-to-stock differences totaling 3 minutes against a 33-minute render. That’s about 8% -- sure, it’s uplift, but it’s not worth the extra money if only using Premiere on a system. The 7980XE is even worse value. Overclocking to 4.6GHz, which is our max supported overclock on a 280mm cooler, allows us to finish the render in 24.5 minutes. If we wanted to pull 700W from the wall and stick a 360 with loud fans on it, we could push to 4.9GHz, but it just wouldn’t be worth it for a non-benchmarking machine – and not great for 24/7 use, either.

Either way, stock, the 30-minute completion time isn’t at all worth the $2000+ cost, not counting the platform. The 8700K blows it all away.

There’s an argument to be made that just raw performance is all that matters in a production environment, but this test was done for our production environment, and we do have budgets to consider. If a 7980XE or 1950X got us a render time reduction proportionate to their cost increase, sure, they’d make sense. But we’re talking single-digit percentages before overclocks. Also keep in mind that we never overclocked the IGP, which might further assist.

This is an interesting chart. Adobe allows users to perform simultaneous renders if outputting from the same project file, like from two separate sequences. In this use case, the high thread-count CPUs show their potential benefits. We’re at 46 minutes to render two files simultaneously on the 7980XE, whereas we would have taken 60 minutes if rendering them one-by-one on the 7980XE. The 8700K has the opposite response: It takes 76 minutes on a software+hardware render, 77 minutes for dual-software, and 72 for dual-hardware. In all three of these cases, it would be faster to render two files sequentially, rather than synchronously, on the 8700K. A single render would have taken 33 minutes, two sequential renders would have taken 66, and dual rendering takes 72 minutes.

This tells us something critical: Because the 7980XE can render faster when multi-rendering than single-rendering, we know that Premiere isn’t leveraging the cores unless loaded with multiple projects in queue, but cares greatly about single-core frequency. The fact that the 2700X also pulls back ahead of the 8700K in these tests further illustrates Premiere’s lack of concern for cores and threads.

A 1080p file with no effects will behave a lot differently from our usual 4K, correction-heavy final outputs. We used one of our Buildzoid videos for this, which is rendered at 1080p, a lower bit-rate, and no special effects. In this test, we observed no measurable performance improvement with hardware acceleration – there’s just nothing for it to accelerate. You won’t see the gains of GPU acceleration if there’s nothing to use a GPU on. You’d want transforms or similar effects to get some value out of the IGP. For a straight 1080p file, even running a 7980XE or 1950X doesn’t really change things meaningfully. Anyone rendering files similar to this one would not need high-end hardware, or even IGP acceleration. That said, CUDA acceleration still helps, and is enabled on all of these. 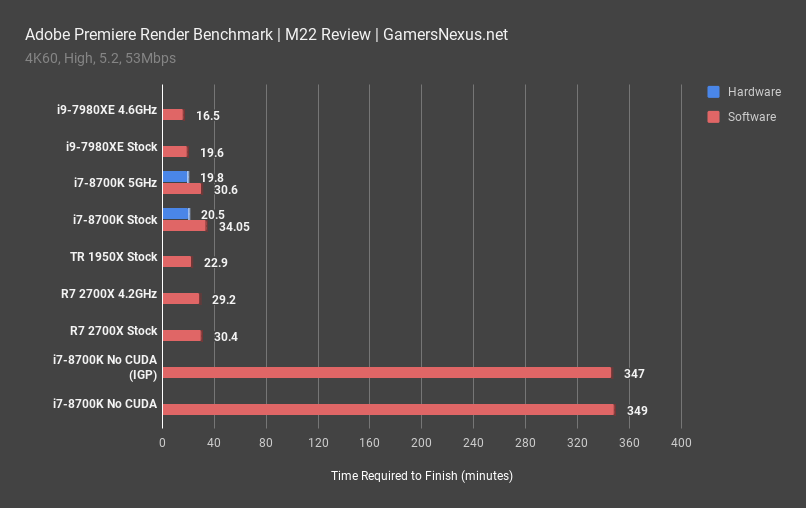 Speaking of CUDA acceleration, we decided to torture ourselves just to give you an idea of how much that still matters. With CUDA disabled in our NZXT M22 review render, it took the 8700K 350 minutes – that’s 5.8 hours – to render the same clip that was finished in 34 minutes with software rendering and CUDA. 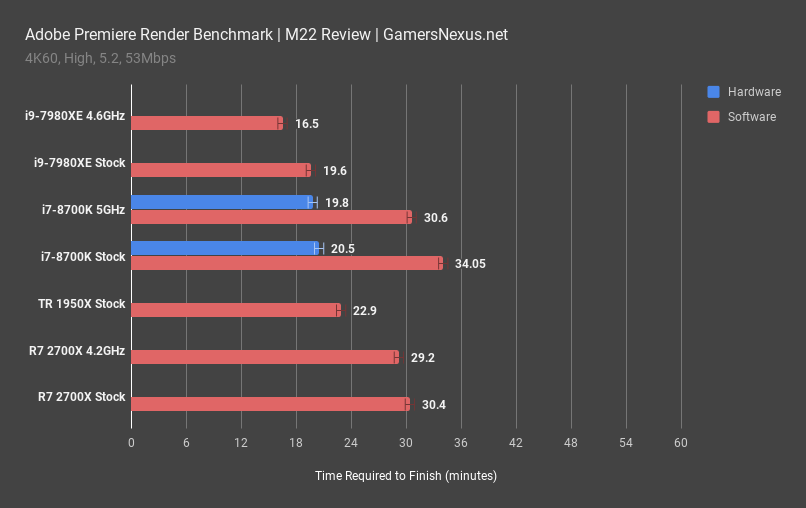 Using hardware rendering on the IGP, we brought this down further to 21 minutes, a reduction from the 34-minute prior time of 38%. That’s hands-down impressive, again, and shows where we should move for our next render machine. The 2700X stays closer to 30 minutes, with the 1950X at 23 minutes and the 7980XE at 20 minutes. Overclocking the 7980XE does get it a few minutes faster than the 8700K stock CPU with the IGP assistance, but at $2000 versus $350, it’s just not justifiable for us. Remember, we have to keep this 7980XE for benchmarking and can’t just use it in a rendering PC, so we would have to buy a second CPU. 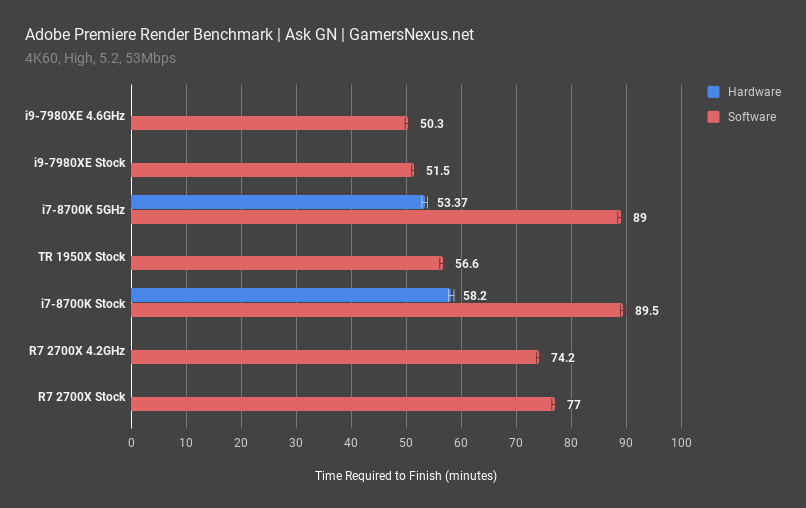 Finally, for an Ask GN video, we measured the 8700K at 90 minutes for both the stock and overclocked variants when rendered without IGP assistance. Enabling the IGP brought us down to 53 and 58 minutes, not distant from the 1950X and 7980XE. This type of video is intensive on the CPU, because there are very few transforms and GPU accelerated effects. It’s almost entirely straight a-roll, which is specifically CPU-intensive.

During this segment of the embedded video for this article, found above, we go through some hands-on experiences with the bench. The point is mostly to illustrate how Premiere leverages different system resources. We’d recommend watching for that segment.

Note that we also observed zero quality difference between the different modes of render. 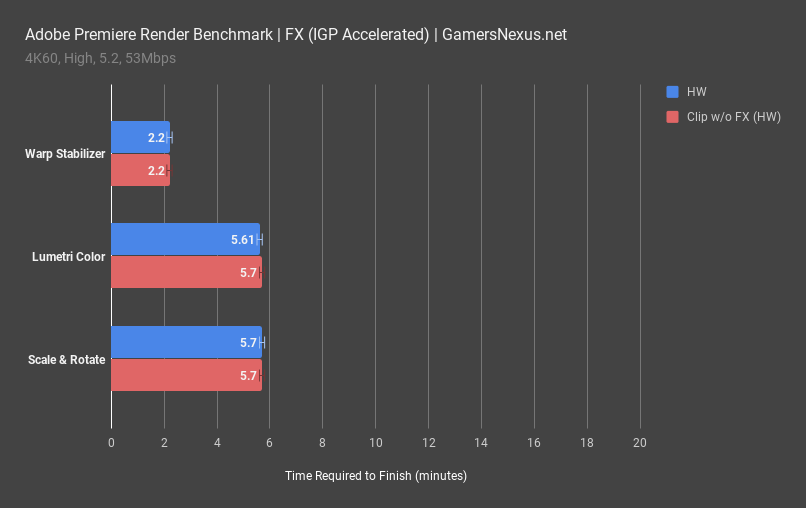 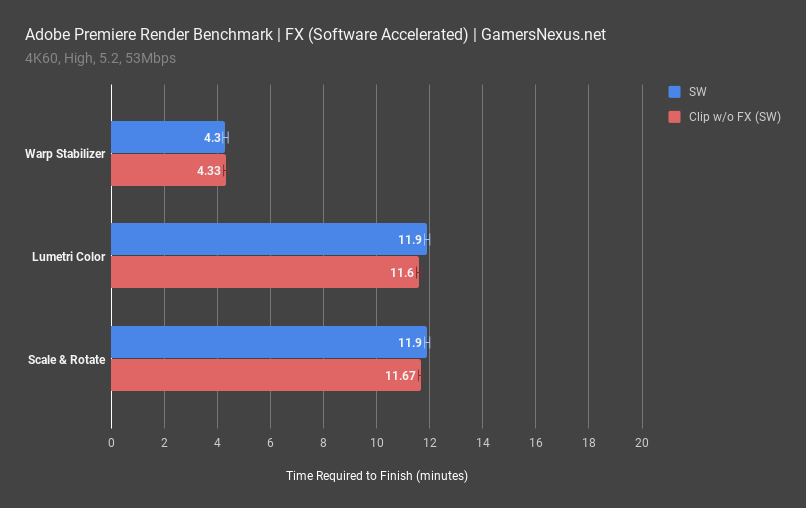 Moving on to some studies of effects, we noticed that rendering is largely unimpacted when toggling things like warp stabilizer, lumetri color, and scales and rotates. A lot of this impact is seen in real-time playback when scrubbing the video, but doesn’t seem to much challenge the render times for our benchmarks.

Warp stabilization during rendering, for instance, was 4.3 minutes with software each time, or 2.2 minutes with hardware acceleration for each render. That said, the frame analysis pre-render would be more impacted than the render.

Scale and rotate showed mostly the same. On more bound configurations, this would start to challenge lower-end CUDA devices, but we mean very low-end. We use a 1080 Ti in our production machine, so this is a non-issue. And for anyone wondering, there’s no difference at 1080p. We won’t bother with a chart for that – we tested the same things there, and saw the same lack of difference.

Despite planning for months to use a retired i7-6900K, a retired X99 board, and whatever else we could cobble together, we’re leaving it all behind for an 8700K configuration. It’ll be just as fast or equivalently fast, and those X99 components can remain in trays for future benchmarking (whereas an 8700K is easier to purchase multiples of).

Owners of Ryzen need not fret, as the Ryzen 7 2700X is still a strong processor for these tasks. It’s better than a stock 8700K, pre-Adobe patch, and competitive overall. For our needs, however, we’ll be opting for an 8700K. There’s no reason to feel buyer’s remorse (or odd fervor toward your brand) if purchasing an HEDT CPU – Intel or otherwise – as long as that CPU still performs to your needs. In most cases for Threadripper and the 7980XE, we saw boosted performance over the 8700K (even with the IGP, in some cases), but the cost isn’t justifiable when an 8700K performs within 10% of the $2000 7980XE for our tasks. For anyone doing multiple renders simultaneously, there’s value in HEDT yet.