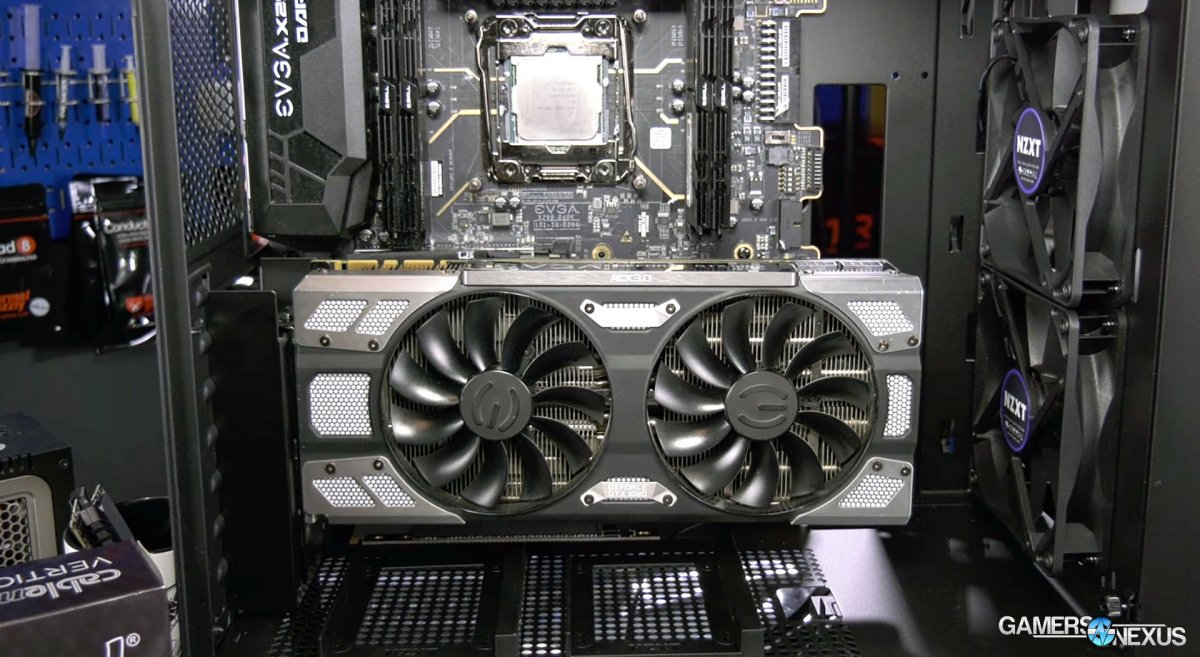 One of our Computex advertisers was CableMod, who are making a new vertical GPU mount that positions the video card farther back in the case, theoretically lowering thermals. We wanted to test this claim properly. It makes logical sense that a card positioned farther from the glass would operate cooler, but we wanted to test to what degree that’s true. Most vertical GPU mounts do fine for open loop cooling, but suffocate air-cooled cards by limiting the gap between the glass to less than an inch or two. The CableMod mount should push cards close to the motherboard, which has other interesting thermal characteristics that we’ll get into today.

We saw several cases at Computex that aim to move to rotating PCIe expansion slots, meaning that some future cases will accommodate GPUs positioned further toward the motherboard. Not all cases are doing this, leaving room for CableMod to compete, but it looks like Thermaltake and Cooler Master are moving this direction.

We’re testing with just the Cooler Master H500M for now, using the mesh front panel for more access to intake. We previously found this case to perform reasonably well for thermals when configure with mesh, and we also know that it has a standard vertical GPU mount that remains close to the glass. This is fine for open loop cards, but not for air-cooled cards.

For testing, we’ve swapped-out our usual MSI GTX 1080 Gaming X and have replaced it with an EVGA 1080 Ti SC2, which has ICX sensors for additional thermal measurements. Measurements include thermistors placed on three memory modules and five power components, including MOSFETs and inductors. We also have GPU diode measurements present.

Testing was conducted with a 30-minute loop of Firestrike Extreme’s stress test, which we’ve found to produce a realistic and high heat load on graphics cards, limiting CPU load significantly. 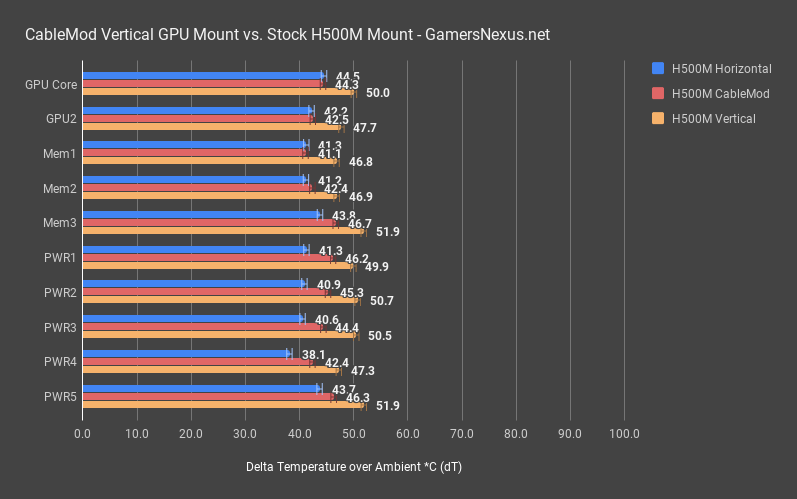 A quick glance shows that CableMod’s solution performs well overall, and even matches the baseline horizontal mounting in some areas of the PCB. The GPU core is within margin of error between the CableMod vertical mount and the horizontal mount in the H500M, both at 44 degrees Celsius over ambient. The H500M vertical mount operates at 50 degrees, marking a noteworthy increase in temperature.

The first two memory modules are also within margin of error for horizontal and the CableMod mount, and again disadvantaged with the stock vertical mount.

CableMod has proven that it’s possible to have a vertical GPU mount without suffocating air-cooled cards, at least in this one case. This is particularly good news, as some manufacturers are moving to build cases with this new mounting format in mind.

We start seeing some meaningful differences in the power component measurements. These are MOSFETs and inductors, and are producing a greater delta as a result of their location on the PCB. Some of the warmer sensors are located toward the bottom of the PCB, below where the cooler MEM1, MEM2, and GPU thermistors are located. This coincides with the slightly higher delta we see in MEM3, indicating that the power supply shroud is a potential inhibitor to cooling for lower-down components. The VRM components are also located out of the most effective cone of cooling from the 200mm intake fans, furthering this.

The difference isn’t massive, and CableMod still does better than the stock vertical mount, but it is an interesting highlight of how the airstream works.

As for clock speeds, they weren’t massively impacted in this test as we set a fixed fan speed of 55% on the EVGA card, which is enough to keep the GPU below heavy clock-gating territory for testing. The upside to this is that we get a much clearer, simpler picture on straight thermal performance. Note that as more extreme cases are imposed, like cases with even worse vertical GPU cooling, there will be a noticeable drop in clock speed – particularly if the card is set to quieter profiles.

CableMod is able to deliver an overall lower temperature with their bracket than the stock H500M, with the configuration we tested, and we would expect this to extrapolate reasonably to most other cases on the market. The extra space between the glass and the card aids significantly in cooling performance.