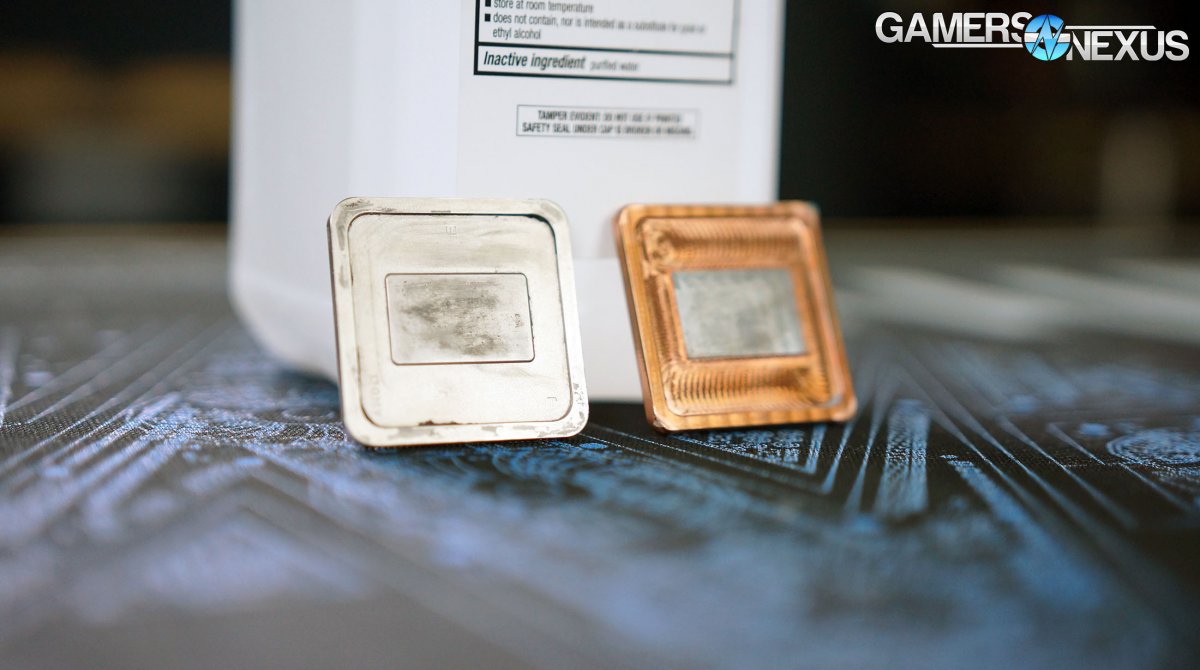 Alongside the question of how frequently liquid metal should be replaced, one of the most common liquid metal-related questions pertains to how safe it is to use with different metals. This includes whether liquid metal is safe to use with bare copper, like you’d find in a laptop, or aluminum, and also includes the staining effect of liquid metal on nickel-plated copper (like on an IHS). This content explores the electromechanical interactions of liquid metal with the three most common heatsink materials, and does so using Thermal Grizzly’s Conductonaut liquid metal. Conductonaut is among the most prevalent on the market, but other options are made of similar compound, like Coollaboratory’s Liquid Ultra.

Conductonaut is a eutectic alloy – it is a mix of gallium, indium, and tin. This is Galinstan, but the individual mixtures of liquid metal have different percentages for each element. We don’t know the exact mixture of Conductonaut, but we do know that it uses gallium, indium, and tin. Most liquid metals use this mixture, just with varying percentages of each element. Gallium typically comprises the majority of the mixture.

Liquid Metal with an Aluminum Heatsink 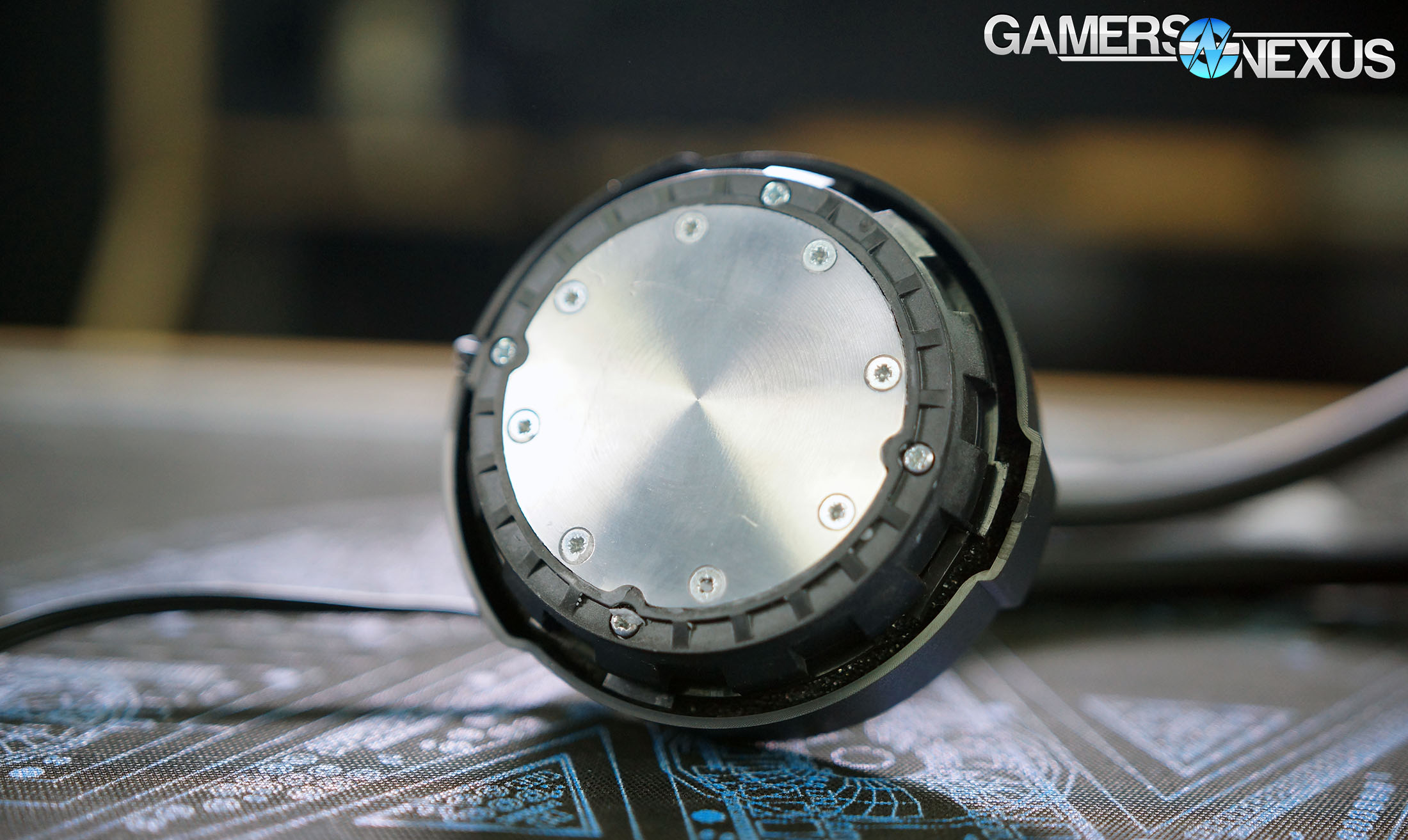 Thermal Grizzly warns strongly not to use liquid metal with aluminum, as do most liquid metal makers, and you definitely should listen to them. Still, we wanted to answer the question of “what if?” 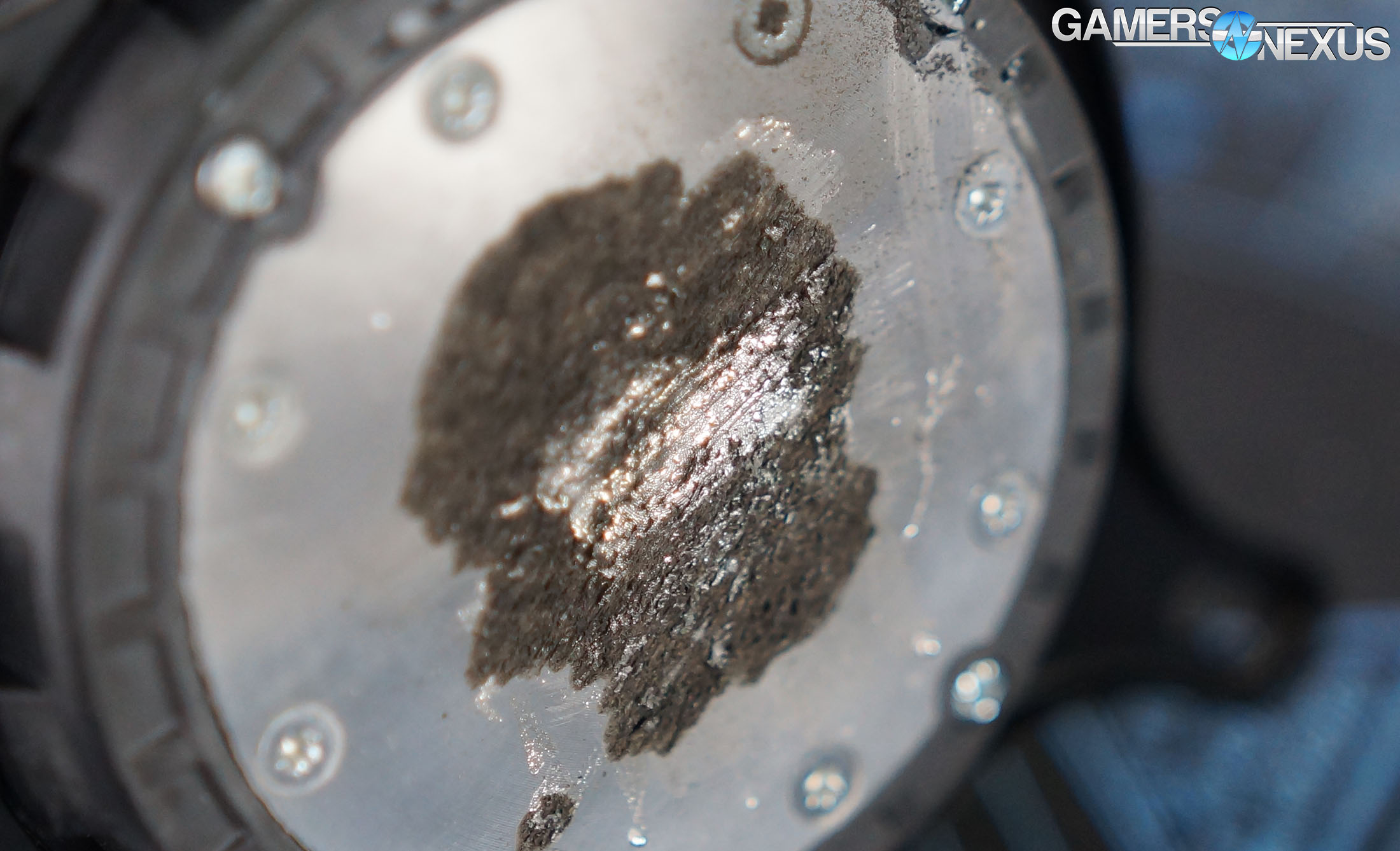 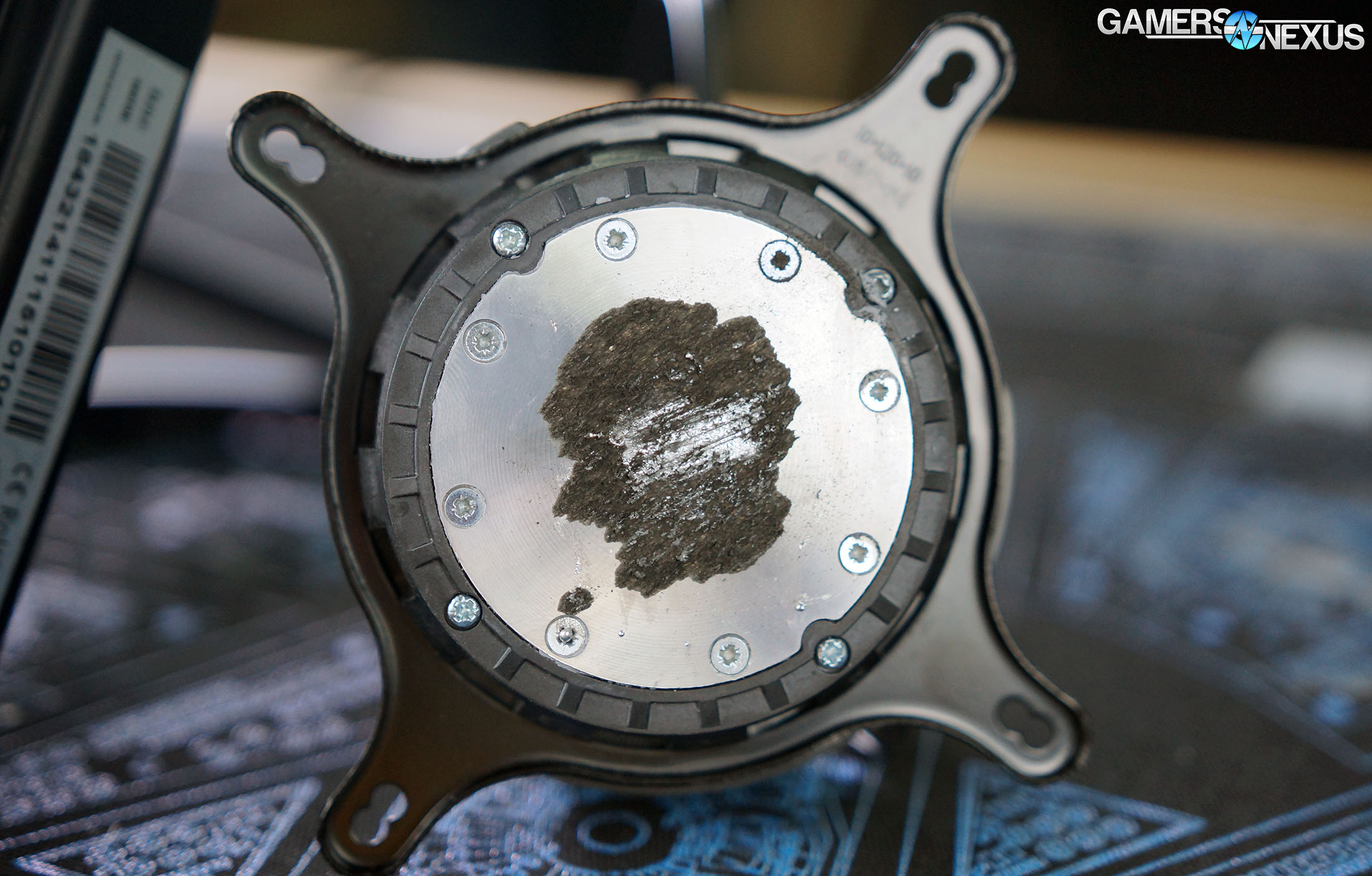 If we add liquid metal, you’ll see that, over the period of a night, it becomes chalky and blackened, and embrittles the aluminum coldplate. This is because aluminum is highly soluble in gallium and will form an alloy with the gallium. Typically, aluminum will build an oxide layer around it, which protects the aluminum from exposure to other elements. Gallium penetrates the oxide layer that forms around aluminum, causing the gallium and aluminum to form an alloy. To better understand this chemical reaction, we asked Der8auer for an explanation of how liquid metal interacts with various other metals. Der8auer works with Thermal Grizzly on product development and has a background in electro-mechanical engineering, making him a subject matter expert for this question.

“Aluminium has an easy and huge solubility in Gallium, which is why Gallium forms an alloy with the Aluminium. Aluminium is a very reactive metal in general, but typically you don't encounter it because Aluminium also quickly forms an oxide layer, which then protects the Aluminium. Gallium can go through this oxide layer and then form an alloy with it, which in a result makes the Aluminium very brittle. Aluminium also reacts heavily with water for example. So, if you have aluminium dust with no oxide film and expose it to air it's extremely explosive. The water in the air will give O2 atoms to the Aluminum to form Aluminium oxide, so the result of the reaction is Hydrogen which then is very explosive. Since it's an exothermic reaction, it can just blow up. Fun facts aside, Liquid Metal is based on Gallium and Indium. Depending on which manufacturer you use, there will be more added. Thermal Grizzly also adds Tin, but I know that Coollaboratory adds even more to the alloy.

“Gallium in general also reacts with copper and leaves it pitted on the very top layer, but the reaction is not heavy so doesn't really matter to Thermal Grizzly. Nickel has the function of a diffusion barrier and doesn't react with the Gallium, which makes it a lot more suitable for the application.”

As a note here, liquid metal is typically about 2/3 comprised of gallium. Reducing the gallium quantity means a higher percentage of indium, which reduces the melting point. Ideally, liquid metal mixtures minimize how many different elements are added to the alloy, as the thermal conductivity worsens as a result. It’s a fine balance between protecting the metals involved and maintaining a high thermal conductivity. Thermal conductivity improves as temperature increases, which further complicates things – for example, you wouldn’t want to use liquid metal for liquid nitrogen overclocking, as it would lose all of its thermal conduction performance and cause other complications. Thermal paste would be better for an extreme cold scenario. 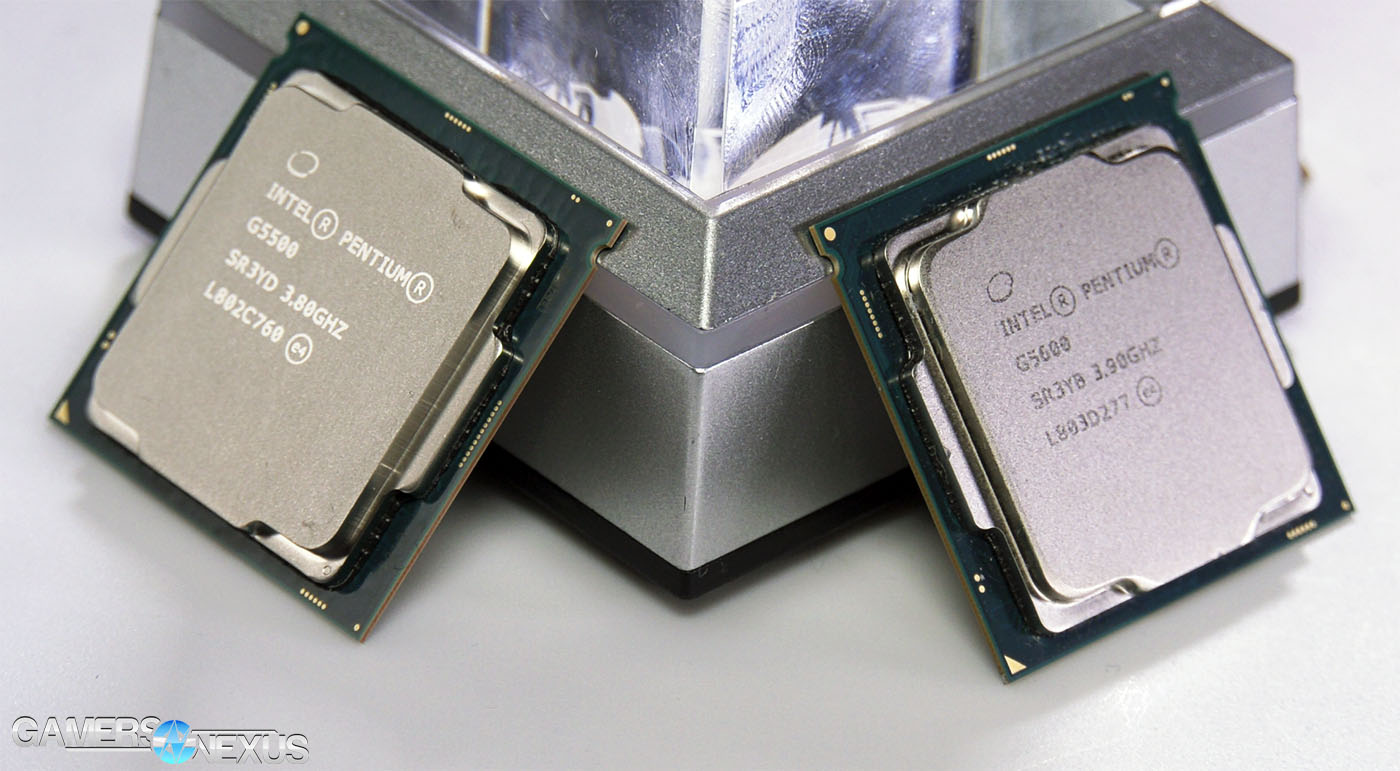 That brings us to the next metal: Nickel-plated copper. Most integrated heat spreaders are nickel-plated copper, including every heat spreader currently used on modern Intel and AMD desktop CPUs. There are some heat spreaders sold by external companies that are bare copper, although lapping an IHS would also remove the nickel plated exterior. Above is a shot of a nickel-plated IHS before liquid metal application. You’ve all seen this before – any CPU that’s new in the packaging, or even one that’s only ever been used with thermal paste, will look like the above. 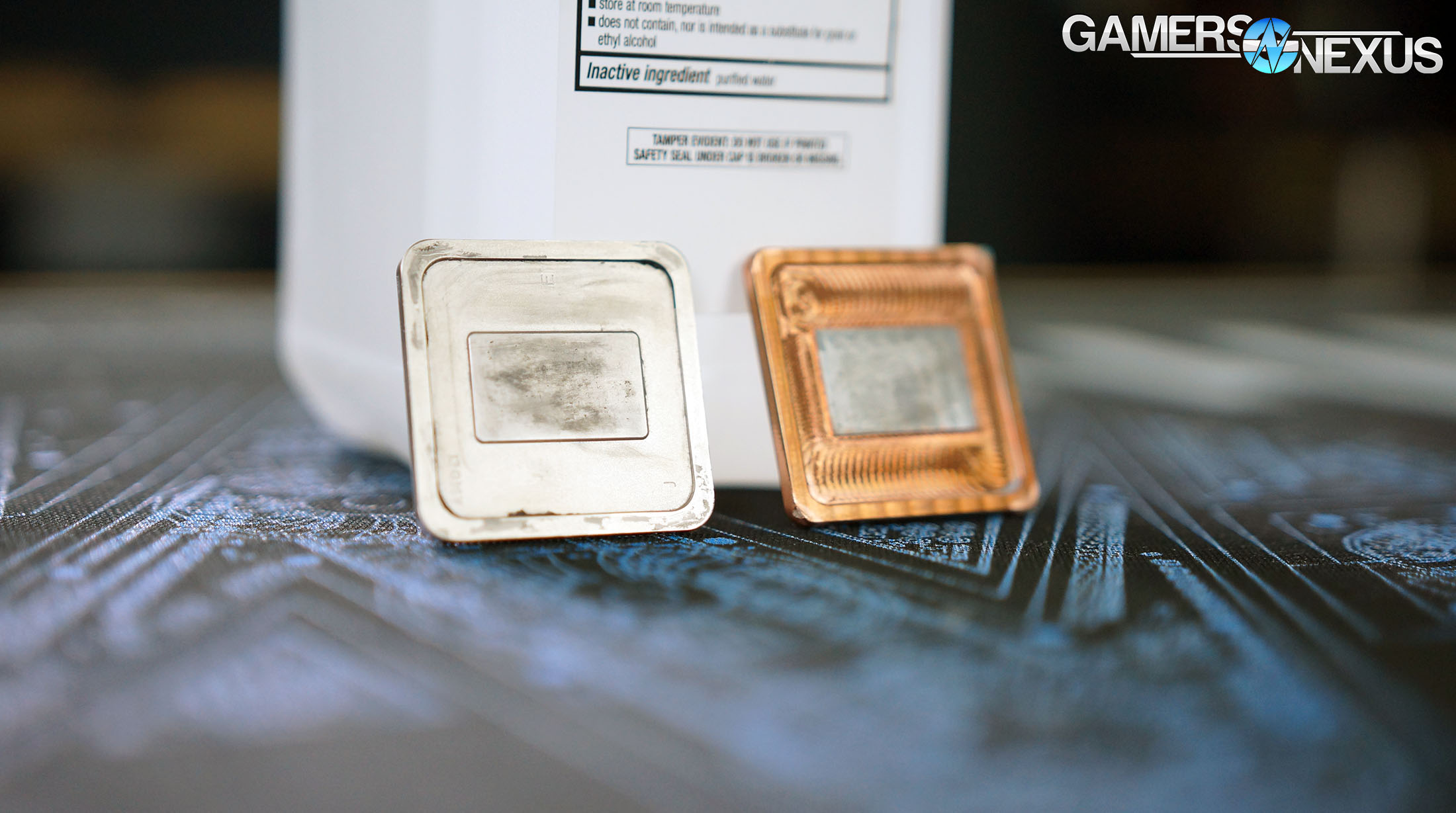 Applying liquid metal between the IHS and the die will result in a look more like the above. It’s slightly stained, but the staining is largely removable. You can slowly remove more and more of the stained surface, but ultimately, some of it will permanently remain. Acetone and rubbing alcohol can do a lot to clean off an IHS stained with liquid metal.

There are two things to discuss, here: First, in our testing, the staining does not impact thermal performance in any measurable way. It performs just as well as it did when the IHS was brand new and clean. Second, because liquid metal is typically about 2/3 gallium, the compound is more tenable to use with nickel than it would be otherwise. Using more gallium will reduce potential for ion migration, which is what you’ll see when mixing copper in various oxidation states with the same liquid metal. Nickel-plated heat spreaders are completely fine to use with liquid metal. There will be staining if you ever remove the heat spreader, but it’s almost entirely cosmetic. We have never been able to measure a performance delta, even with a stained, raw copper IHS.

Liquid Metal with a Copper Heatsink

Finally, we can move on to the Rockit Cool raw copper heat spreaders. In this instance, there is more electromechanical potential for galvanic corrosion with the liquid metal than in the nickel-plated example. Depending on the mixture of liquid metal, this use case will display different results. 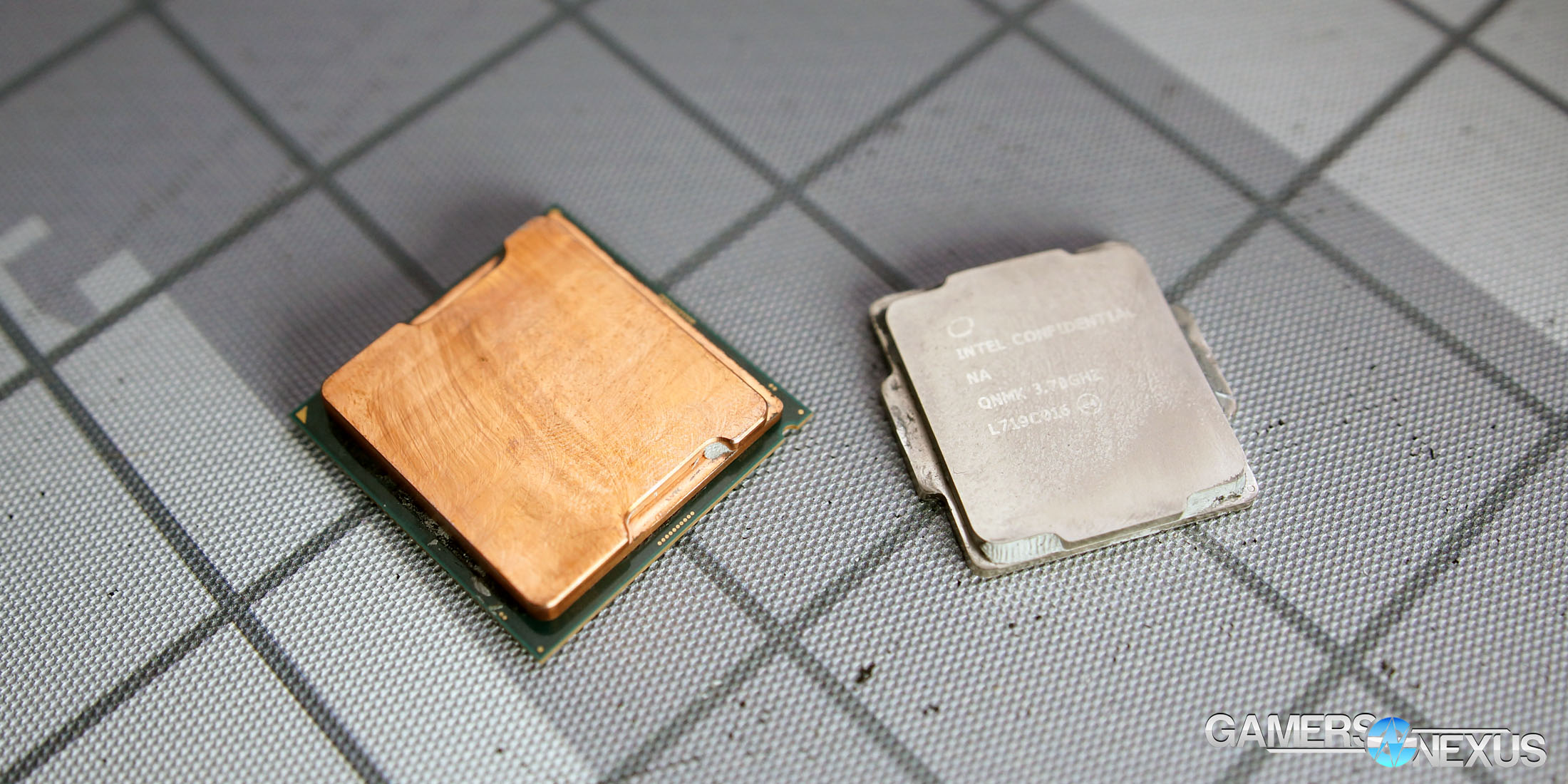 We have some before shots of the Rockit Cool IHS that we can show. It’s clean, new copper and very shiny. Applying liquid metal will result in heavy staining: 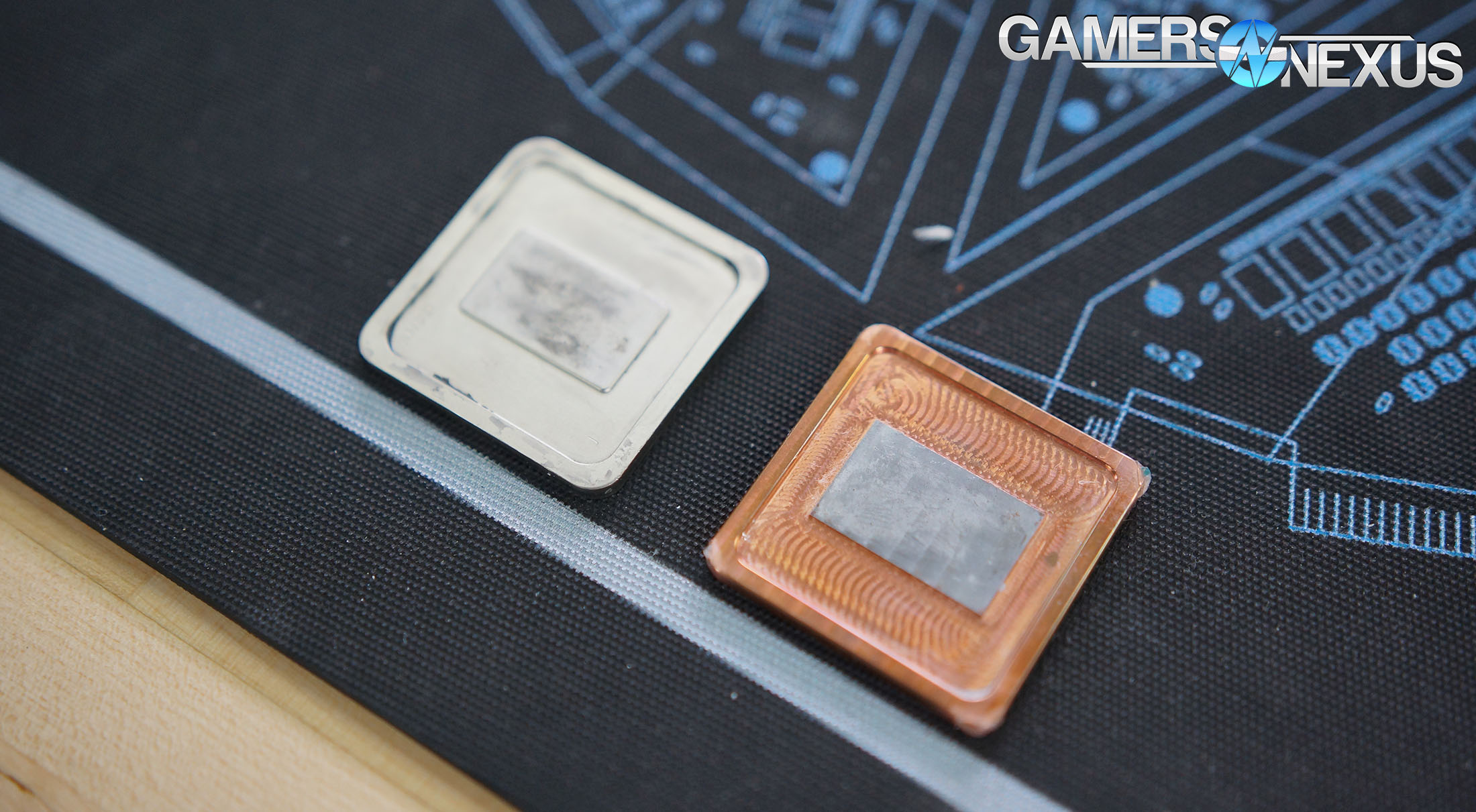 This is similar to what we saw with nickel, but much more extreme and effectively impossible to remove, even with a lot of acetone. That’s because we’re starting to see ion migration into the copper, with some of the liquid metal permanently plating the copper. Gallium has a negative potential and copper has a positive potential, which will cause the gallium to migrate and plate the copper. In terms of performance, the copper IHS retains all of its original performance characteristics (in our testing), and so looks a lot worse than it is in reality. This is a stain, not heavy pitting or corrosion.

This isn’t news, but don’t use liquid metal with aluminum – it will embrittle the aluminum and form an alloy with the coldplate, resulting in chalky disintegration of the two connecting metals. For a nickel-plated IHS, liquid metal is fine. The heavier gallium composition makes combination with nickel tenable, and is a non-issue for corrosion and performance. Copper is also mostly OK. It will stain with Conductonaut (heavily), but performance remains the same. We have not tested other liquid metals with copper yet.