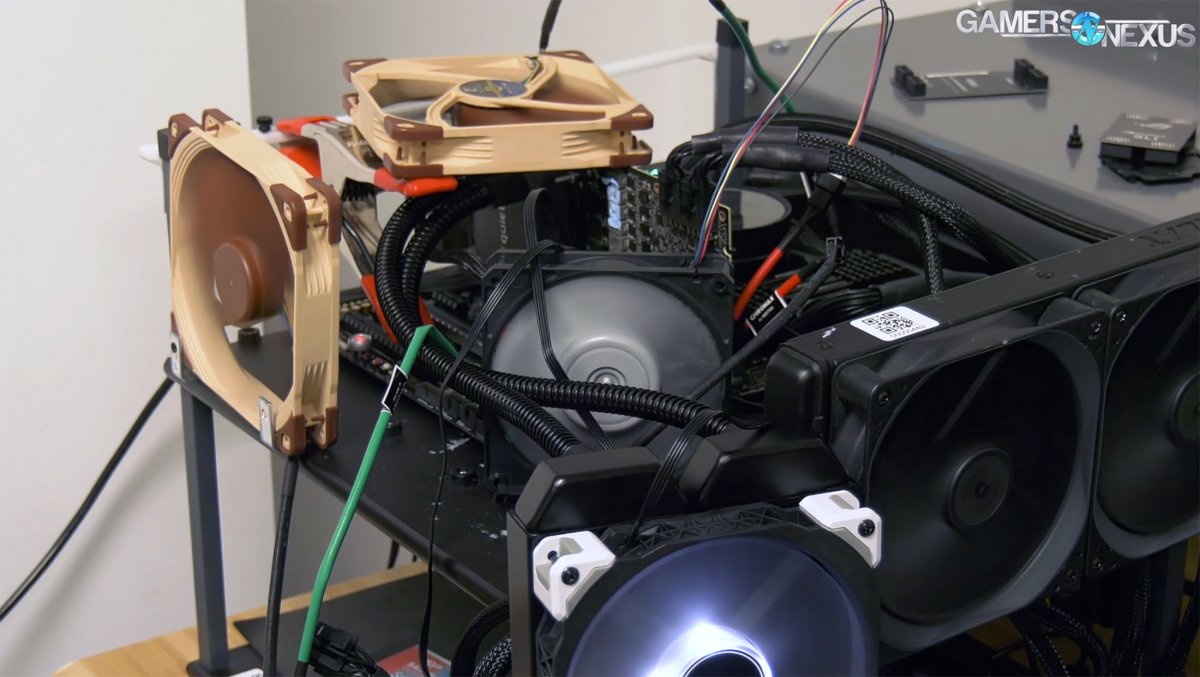 Separately, for the initial RTX 20-series reviews, we are using 10-series board partner models instead of reference models. This is because we know that most of the market, for fact, is using board partner models, and we believe this to be the most realistically representative and relatable for our audience. We acknowledge that the differences between the RTX and GTX reference cards would be more pronounced than when comparing partner cards, but much of this is resultant of poor cooler and reference card solutions in the previous generation. It creates, in our eyes, an unrealistically strong appearance for incoming cards on dual-axial coolers, and does not help the vast majority of users who own board partner model 10-series cards.

Starting strictly with frequency will help best illustrate the performance characteristics of our Hybrid mod. We’ll get to thermals momentarily. For this test, we’re using 3DMark – Firestrike Extreme on a frozen frame to render the same data repeatedly.

Before those, here’s what it looks like when we add an overclocked line to the chart. We were able to sustain a highly stable 2130MHz clock once we found stability – you’ll see a few crashes in there from when we were finding the limits. The all-time peak was 2175MHz, then we stabilized for a little while at 2145MHz, but the application crashed shortly after. A firm stable frequency of 2130MHz was possible in Firestrike with the new cooling solution. That’s a major jump over the air-cooled card, but whether or not it gets leveraged in games will heavily lean on when the power limits are encountered.

Let’s look next at the same tests as the previous two charts, except this time from the perspective of thermal results on the GPU diode only. We can look at VRM and VRAM temperatures next. 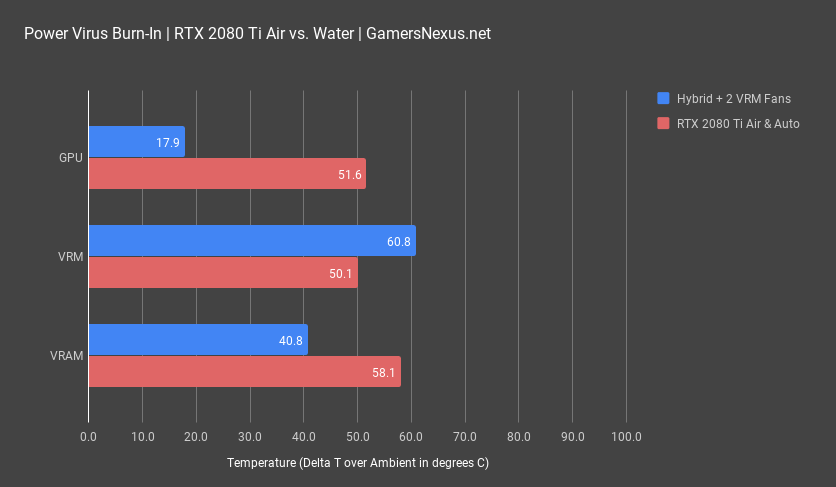 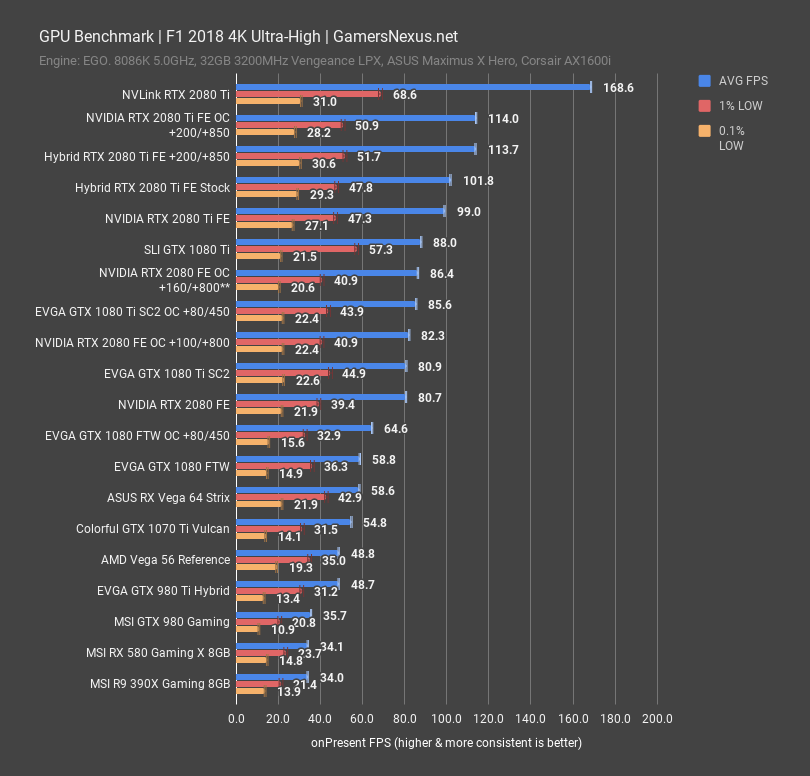 F1 2018 is up now. This game uses the Codemasters EGO engine and is useful for a heavily GPU-intensive title. It’s also our only racing game representation. 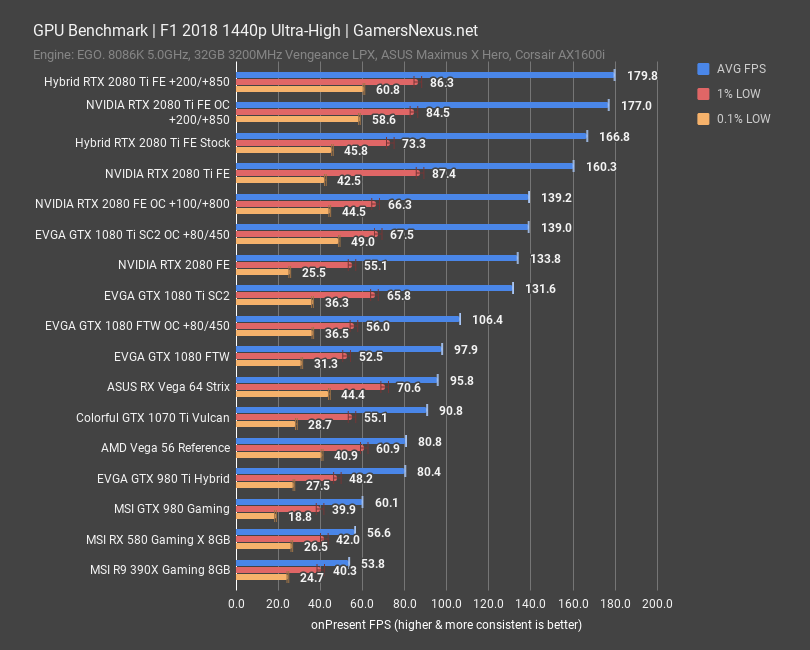 Just in case you were wondering, 1440p is the same situation: The Hybrid mod pushes about 4% faster framerate than the 2080 Ti FE. Not impressive for the amount of work involved, and ultimately a power limitation. Once again, we’re pegged to 15A down the PCIe cables. 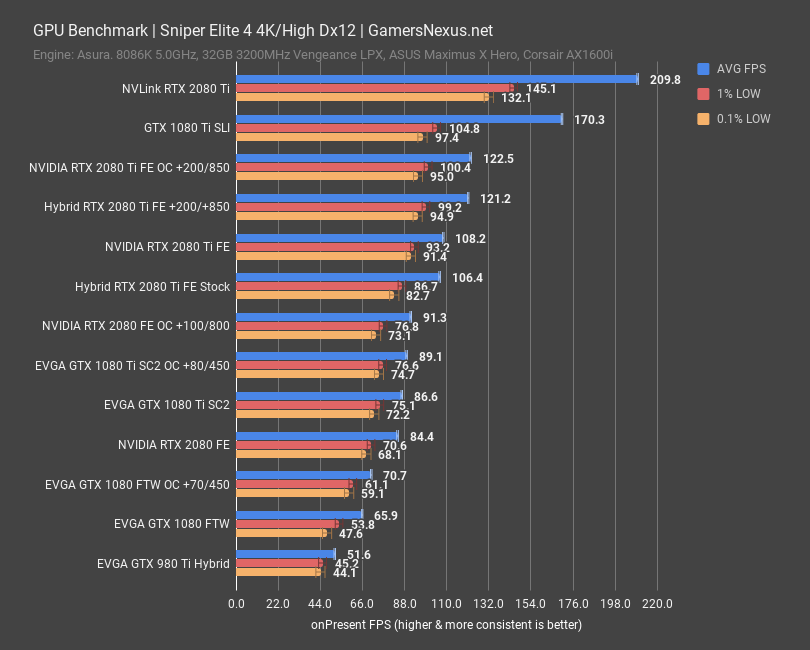 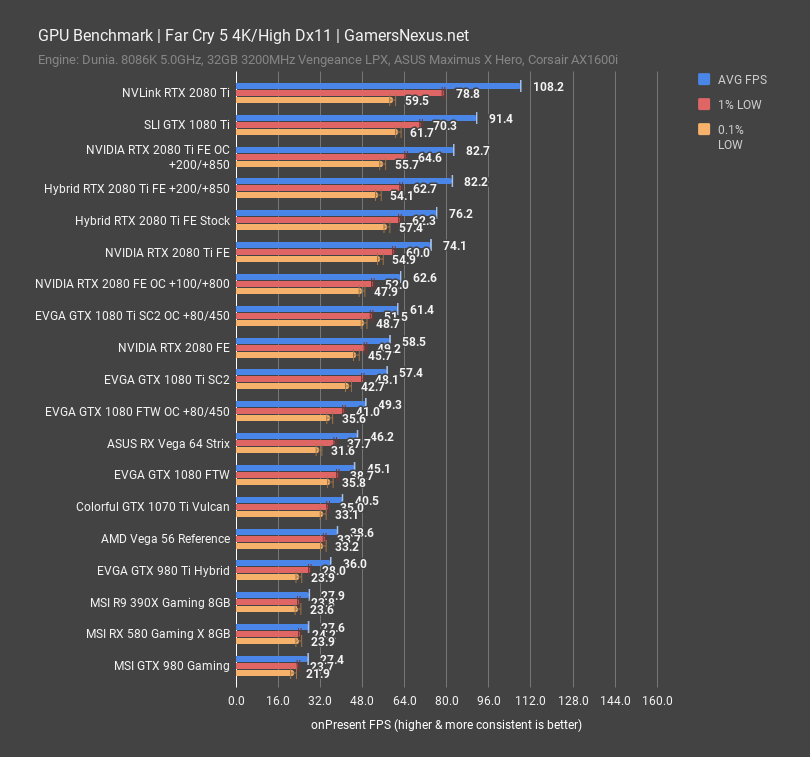 Far Cry 5 uses the Dunia engine and is commonly GPU bottlenecked, particularly at higher resolutions. The game is also running as a representation of a Dx11 title. At 4K, the RTX 2080 Ti FE operates at 74FPS AVG, with the Hybrid mod at 76FPS AVG. We see zero scaling when both are overclocked to +200MHz core and +850MHz memory – the scaling has vanished as we’ve bumped against a hard power limit. 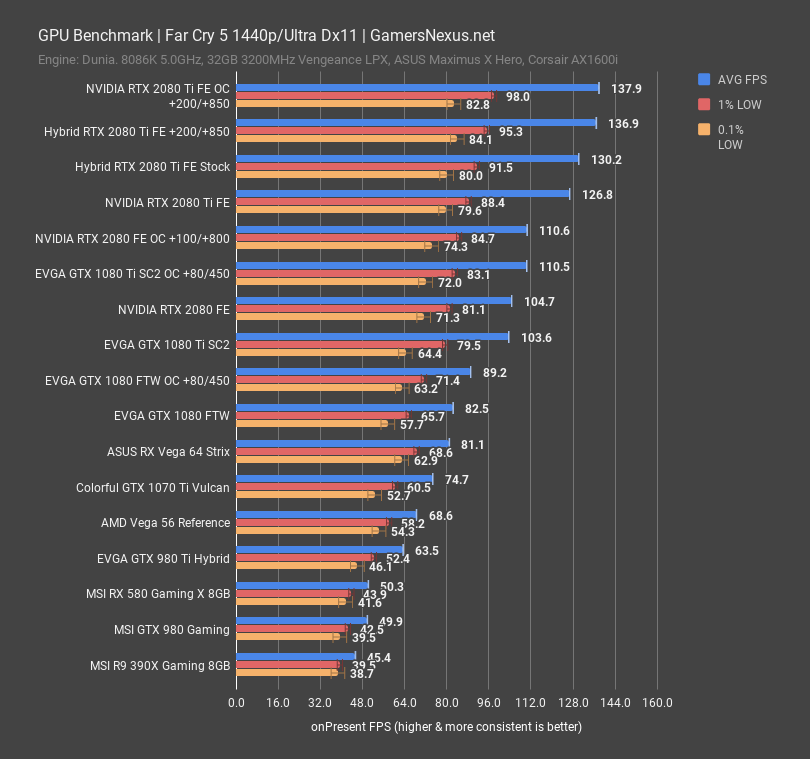 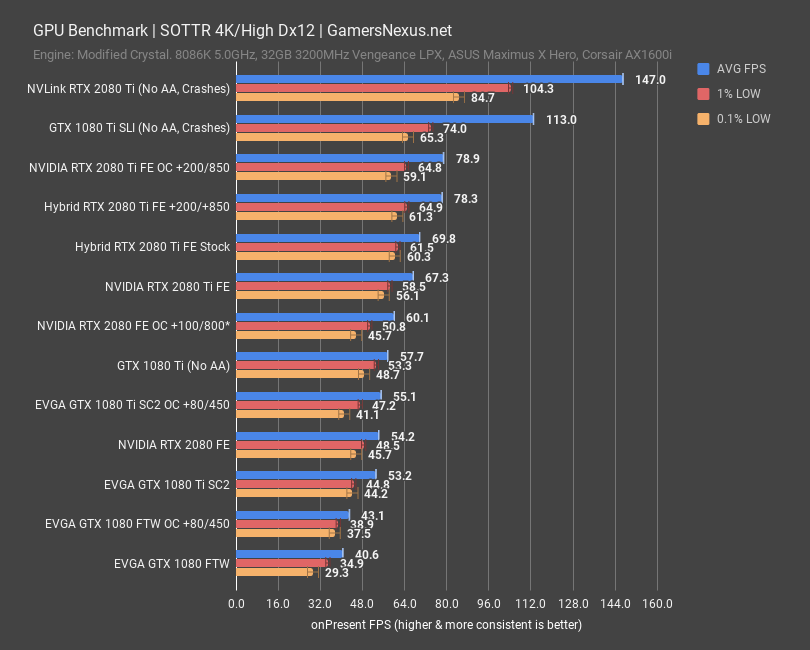 Shadow of the Tomb Raider is the last one we’ll bother showing. This is a modified Crystal Engine game on Dx12. We have other games benchmarked as well, like GTA and Ashes, but the results scaling is identical to what we’re seeing in these others. It’d be boring to show 20 minutes of charts that are power limited; suffice to say, the Hybrid mod only helps marginally for this generation’s reference card. We simply need more power. 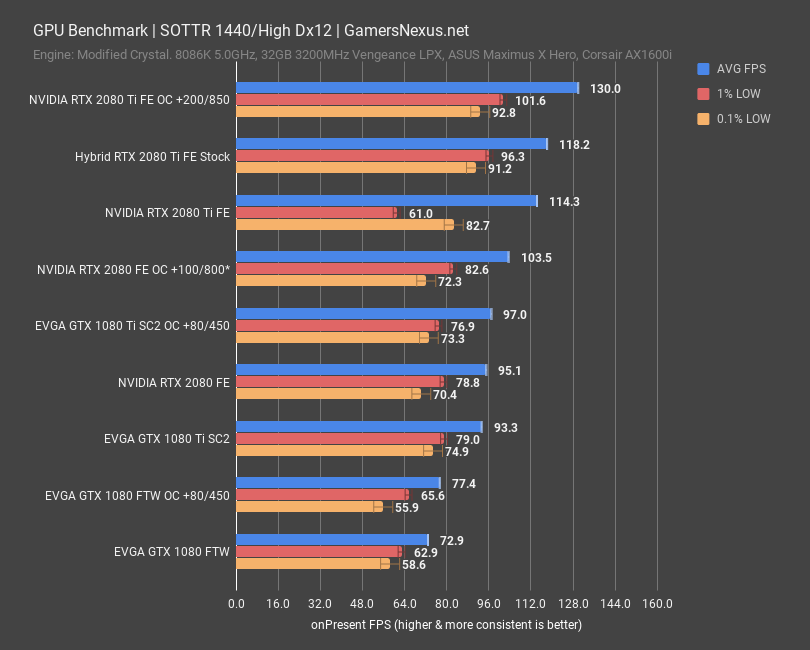 As for Tomb Raider, at 4K, the numbers are nearly identical for both the stock Hybrid and air-cooled cards and the overclocked variants. No meaningful change from thermal advantage.

Conclusion: Is Liquid Cooling an RTX 2080 Ti Worth It? 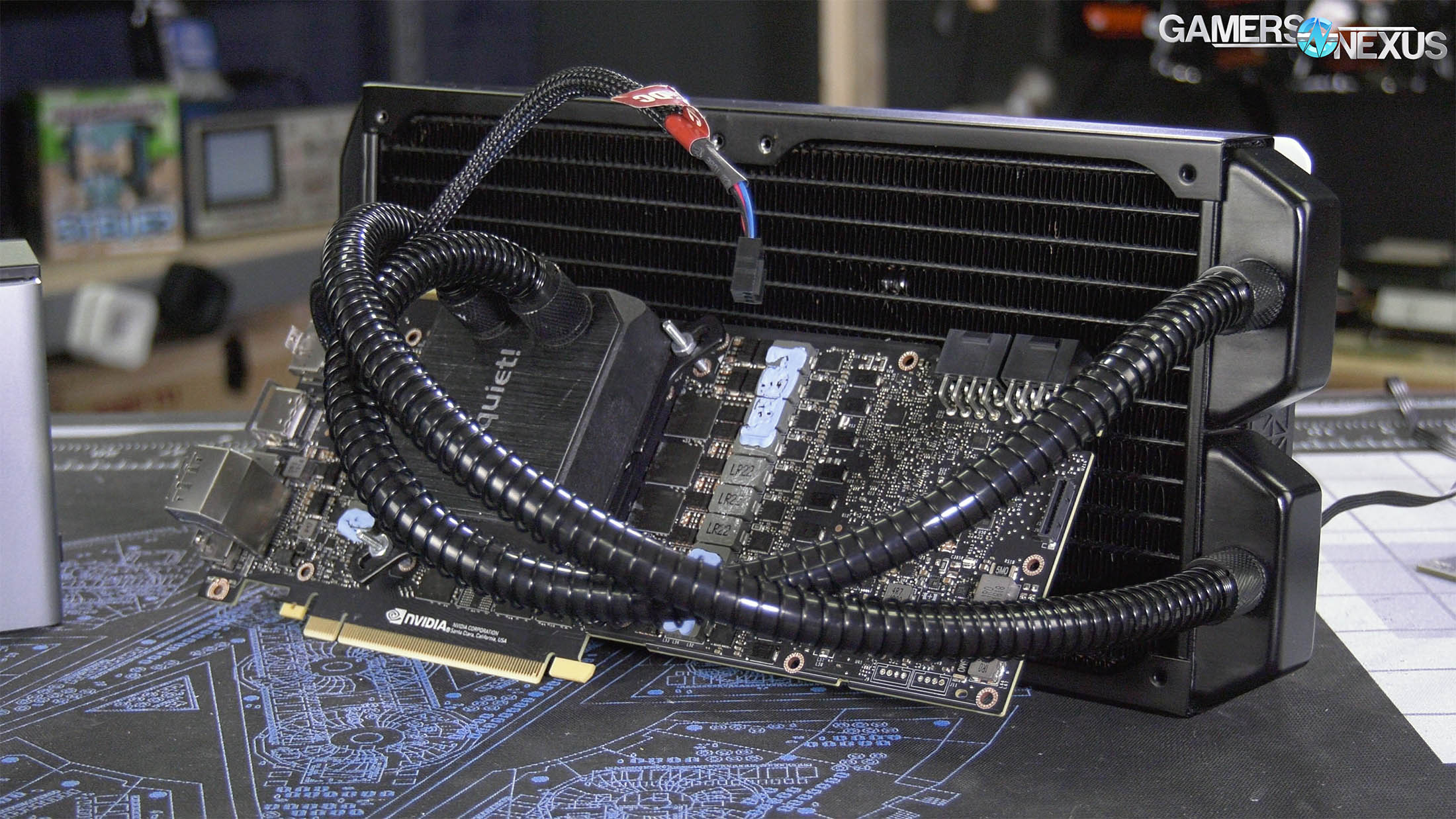 The answer to the above header is "no, not really."

Unfortunately, for the first time in our history of hybrid-modding cards, there's really no immediate benefit. It's cooler, sure, and that does help with clocks -- but most games have us slammed against a power limitation, hitting 15A down the PCIe cables and proceeding no further. NVidia, for having the best VRM and PCB they've made in their history of consumer cards, has for some reason heavily limited the power throughput allowance on the Turing cards. It's sad, really, as the board can handle the power and our cooling solution can handle the heat. It may be true that nVidia found its GPU to be prone to failure at higher voltages or power throughput, but we'd still like to have the option to expose it to said failure if we so choose. That is, after all, the enthusiast way.

Regardless, the only real reason to liquid cool these cards is to reduce noise. That's a fine reason, but not the one we wanted.

Onwards and upwards with a less power limited board, it seems, would be our only option to increase the clocks further.