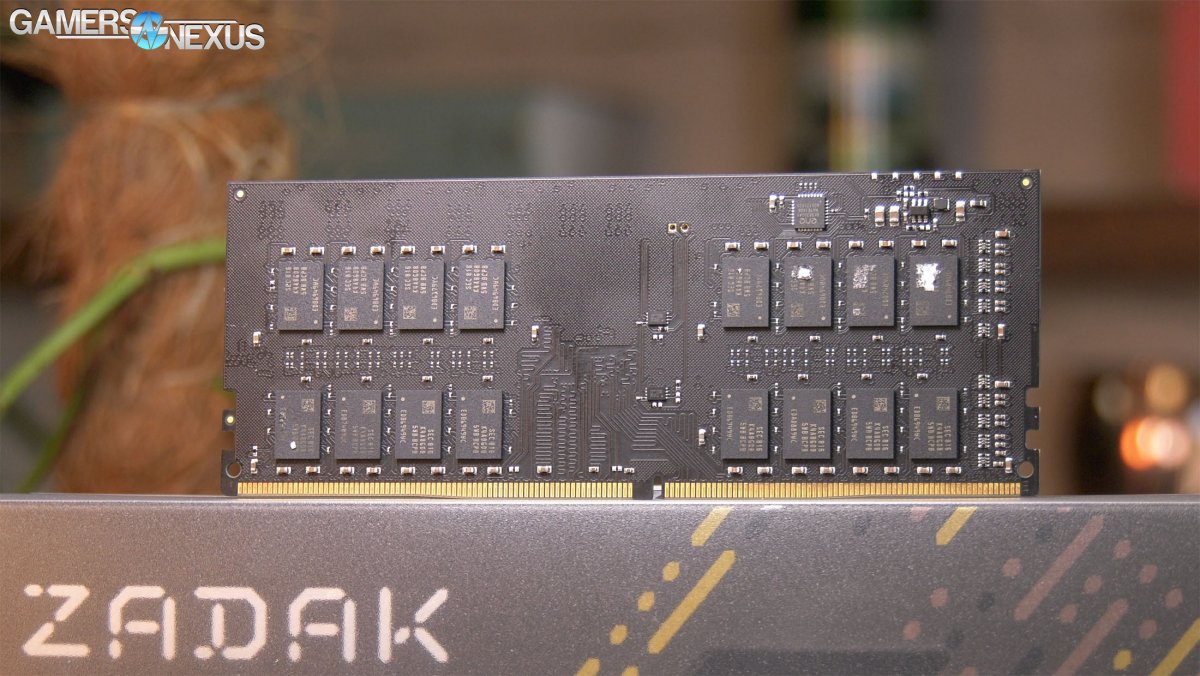 The other downside is that it’s presently an ASUS-designed memory spec, which nearly guarantees limited adoption. ASUS itself only has three boards that presently support the DC DIMMs; we tried using them with our Maximus XI Hero for standardized benchmarking, but found that it doesn’t even boot. Only the Z390-I Gaming, the Gene, and the Apex support DC memory. The Z390-I is a mini-ITX motherboard, so it actually has some meaningful use case of populating two slots with a higher capacity than would otherwise be possible. The Apex and Gene also fit this bill, as they’re both limited to two slots, but both are ATX boards. Two-slot, 1DPC designs can be useful for extreme overclocking by simplifying the memory traces, but we don’t commonly see extreme overclocking overlapping with ultra-high memory capacities; in fact, in a lot of XOC instances, maxmem is set in Windows to get better timings.

This is already an extremely limited use case, then. It’s $800 starting for the lower frequencies, two sticks, and only compatible with three motherboards on the entire market. If using a motherboard with four slots, you could get 64GB at DDR4-3200MHz for about $400 to $680, depending on what timings you’re buying. For sake of pure capacity, you’d clearly be better off going with a board that has the full four slots, but for sake of form factor, the Z390-I might make sense in some extremely limited use cases with this RAM.

Using the memory on the Apex, we noticed that HWINFO64 reports that there are four sticks populating the board but, as said earlier, the board itself only has two slots available. There’s some trickery going on here to spoof the memory into working in this board, but we’re not sure what it is and it’s presently not being disclosed.

Taking the memory apart wasn’t particularly easy. There are only a few screws holding each ZADAK module together, but the thermal pads are more of a thermal adhesive – they’re really stuck on there, and removing them requires some finesse to not damage the module.

Underneath, we see two rows of Samsung memory across two columns, one set on each side. This is Samsung’s K4A8G085WB-BCPB memory solution, which is an 8Gb module. There are 8 bits in a byte, so we end up with 16GB of memory per side on these sticks.

We ran a few tests on a 9900K at just 4.9GHz all-core. Our tests were primarily TimeSpy Extreme Physics, as the software is extremely responsive to memory timing changes. This is something we’ve seen in our overclocking streams first-hand, where a single timing change can result in hundreds of points of score increase. We also ran some tests with Cinebench, although the software really doesn’t seem to care about timings much, and with MAXMEM.

This table on the screen shows some of our tuning steps. Our end result had us tuned to 3466MHz at 1.5V, tRFC at 300, then 270 for tRFC 2, and 256 for tRFC3; we tried lower tRFC settings, but ended up with lower performance. We dropped tFAW to 23 for now, with primary timings stable at 14-14-14-34. We maxed-out tREFI for better performance in 3DMark. We set RAS to RAS delays to 4, CKE to 6, and tuned some of the tertiary timings manually, but left most alone.

Here’s a chart for some visualization of results. Our result with XMP only had us at about 4920 to 4930 for TSE Physics, with a 3466MHz overclock and no changes to timings landing us at 5138 points. All the steps in between are also plotted on this chart, as you can see in the middle clump of results, but the final result had us at 5489 to 5508, a climb of about 12% in total CPU score. 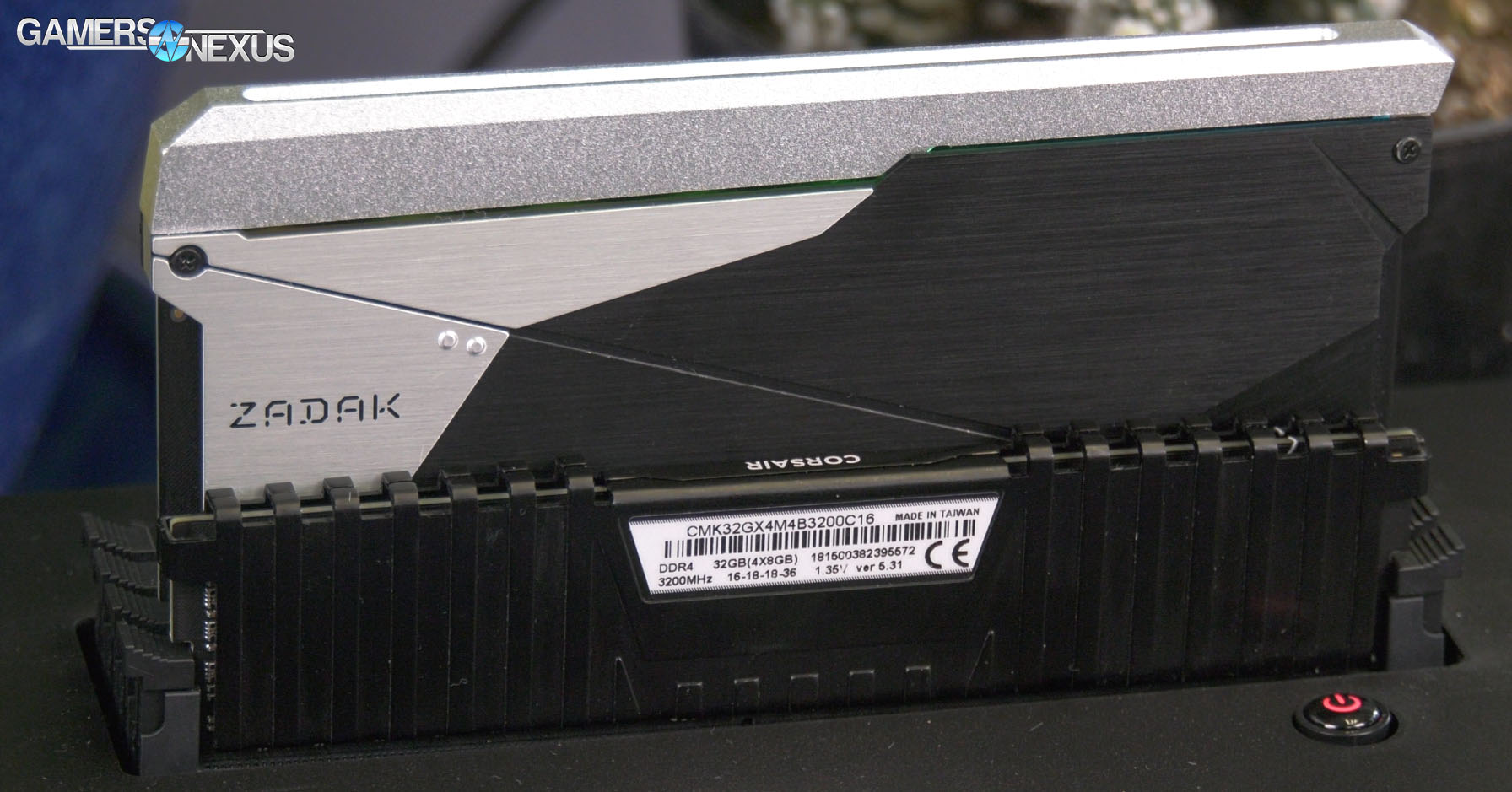 The Samsung memory on ZADAK’s DC DIMMs overclocks reasonably well, which is more than we expected from something focused first on high capacity; then again, it’s $1000 for the 64GB kit that we got, so maybe we were expecting too little.

These things are interesting, assuredly, but have an exceptionally limited range of use cases. The most viable we could come up with is as such: You’re a traveling video editor or 3D animator, or otherwise someone with a need for high memory capacity, and you must work on the go, but also must have a mini-ITX portable box to bring on the road (a laptop won’t suffice).

That’s where we figure the memory is best applied, and even then, that’d better be for some high-paying work to justify the cost. With only three motherboards on the market supporting DC DIMMs, an ASUS “standard,” the Z390-I Strix Gaming appears the most suitable to our hypothetical use case. 64GB of memory can be had in 4-stick allotments for much cheaper than the 2x32GB combination, of course, and are still treated as the same amount of sticks by BIOS and the motherboard. Because the 1x32GB stick counts as two DIMMs by interpretation on the board, according to HWINFO64 and BIOS, it would appear that we won’t see these compatible with non-1DPC configurations, thus limiting usefulness.