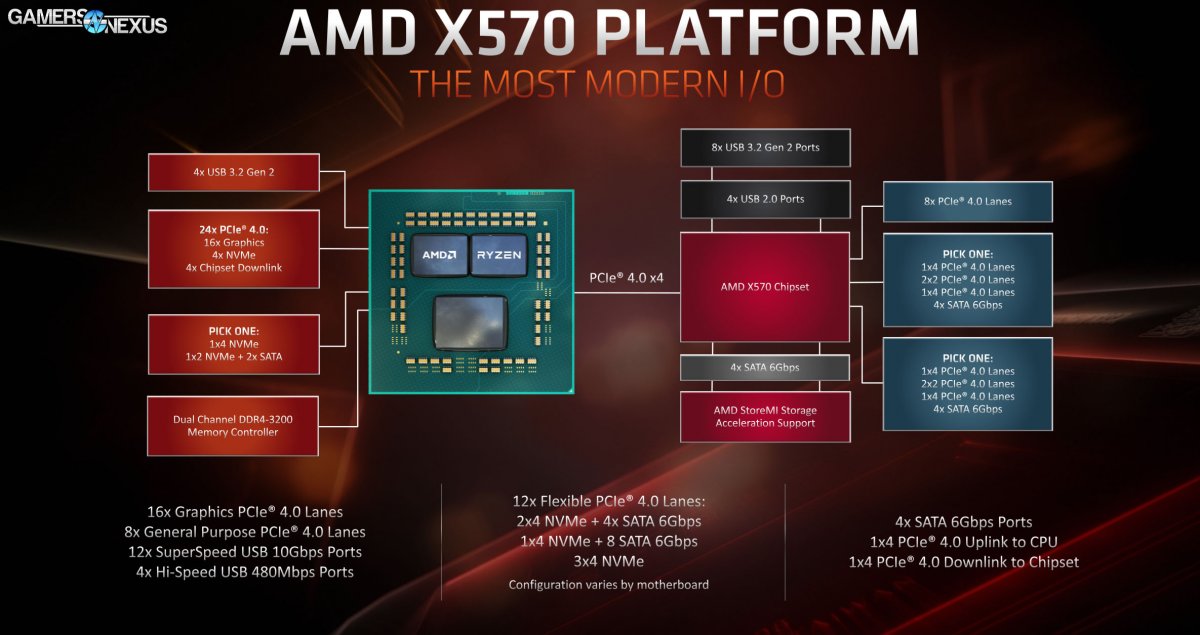 Chipset average power is measured at 11W, according to AMD, and board partners have told us peak power is at around 14W. Some board partners have told us that they’ve seen peak power up to 15W, but we’re uncertain if that was just for an alpha version of the chipset. A range of 11W-15W, or at least 11-14W, explains the big heatsinks and fans on most of the motherboards, but we still need to look at specs. At present, the chipset doesn’t downclock during low load – it’ll burn at 11W nearly constantly, but our understanding is that AMD is working to fix that. X570 has been AMD’s biggest challenge with launching Ryzen 3000, resulting in at least one delayed release already. The difficulties stem from the added complexity and power requirements of PCIe Gen4. Comparatively, X370 and X470 were about 5.8W under load.

Let’s get into the specs. 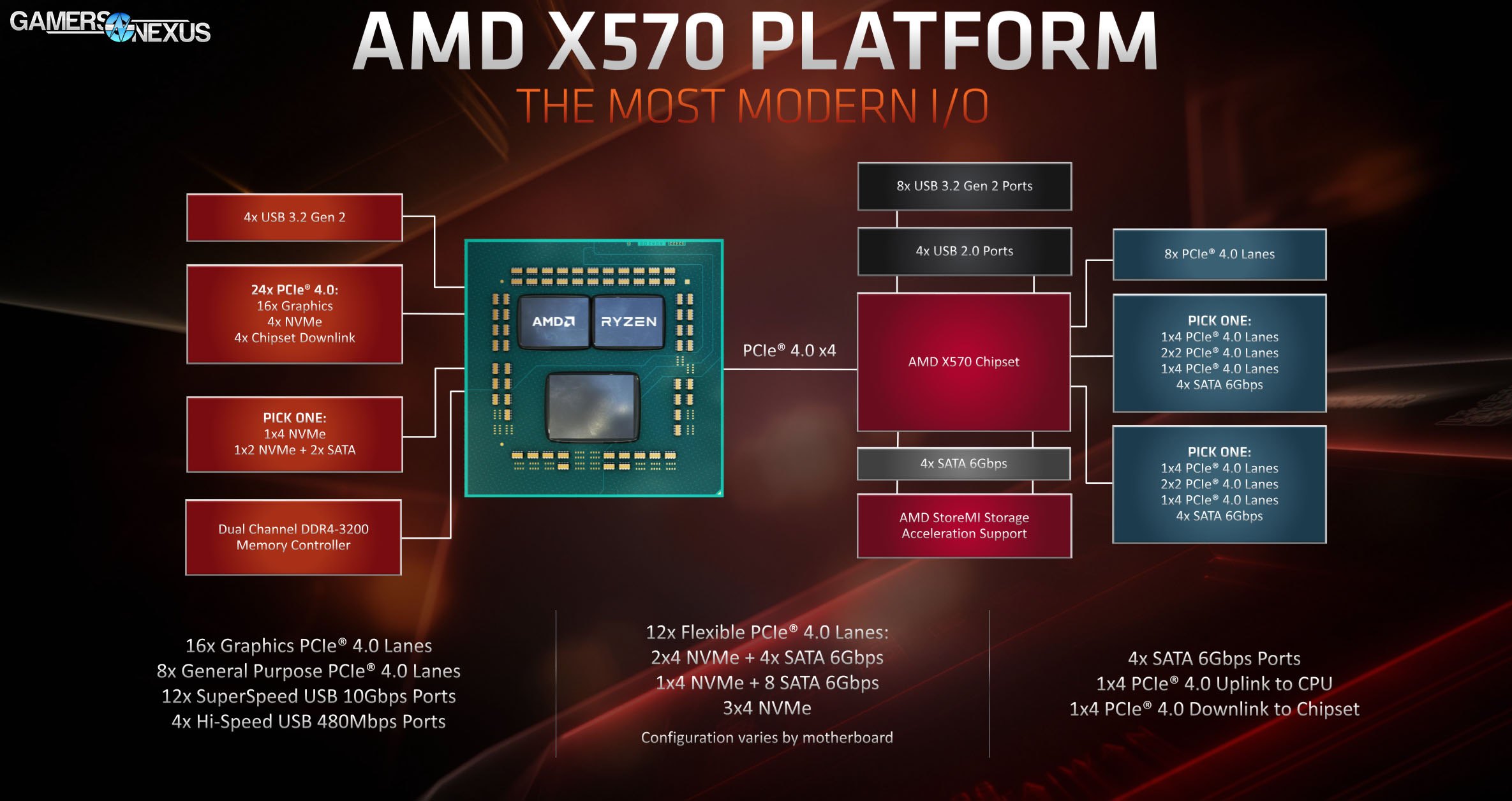 The Ryzen 3000 CPUs have 24 total PCIe lanes. 4 of those are General Purpose or NVMe SSD lanes, so you get 4x Gen4 straight to the CPU for SSDs, with 16 used for PCIe graphics lanes. The remaining 4 lanes go to the chipset and allow more bandwidth for chipset-to-CPU transactions. The CPU further supports 4x USB 3.2 Gen2 connections and a pick-one choice of either 1 x4 NVMe or 1 x2 NVMe with 2x SATA.

The chipset has 20 PCIe lanes, 16 of which are assignable for IO. Motherboard manufacturers have some limited level of freedom to assign lanes between devices, PCIe slots, SATA or USB high-speed devices, or high-speed networking, depending on goals of the board. 8 of X570’s lanes are always PCIe, the other 8 can be muxed down for things like SATA or those other devices. The X570 chipset also supports 4x USB2.0 ports, 8x USB3.2 Gen2 ports, and two sets of a pick-one choice of either a single use of 4 PCIe Gen4 lanes, dual-device use on a x2 configuration of PCIe Gen4, or 4x SATA 6Gbps lanes. This is going to be where motherboard manufacturers make some decisions to allocate lanes to different slots or ports. Finally, the chipset natively supports 4x SATA III ports, which can be increased by burning one of the pick-one choices on an additional 4 or by using an external controller.

Here’s a chart comparing versus the previous generation. The biggest change is obviously Gen4 – all the PCIe lanes on X570 are gen4, whereas that didn’t exist on desktop platforms previously. The X470 and X370 chipsets were actually the same as each other, with the only real difference being major upfits to motherboard BIOS by the manufacturers. X470 motherboards generally solved a lot of X370’s rampant memory issues early in the life of Ryzen, and that was more BIOS-side or trace routing than anything. X470 was more of a demarcation of a BIOS upfit, not an actual chipset change. The asterisks in this table indicate places where numbers could change based upon the “pick one” option used by manufacturers. Lanes can be assigned elsewhere as needed.

The move to PCIe Gen4 means that each lane has more bandwidth than previously, so fewer lanes can be used to accomplish the same bandwidth. The other major change is the move to support 10Gbps USB 3.2 Gen2 ports, up to 8 natively. As always, motherboard makers can expand support for some of these items by adding third-party controllers on the board, but this is rarely done as cost and complexity increase.

That’ll cover all of the changes. It’s simple, ultimately, and is entirely focused on differences in IO capability (with some differences in power consumption, of course). Hopefully this help you in selecting the right motherboard for your purposes.