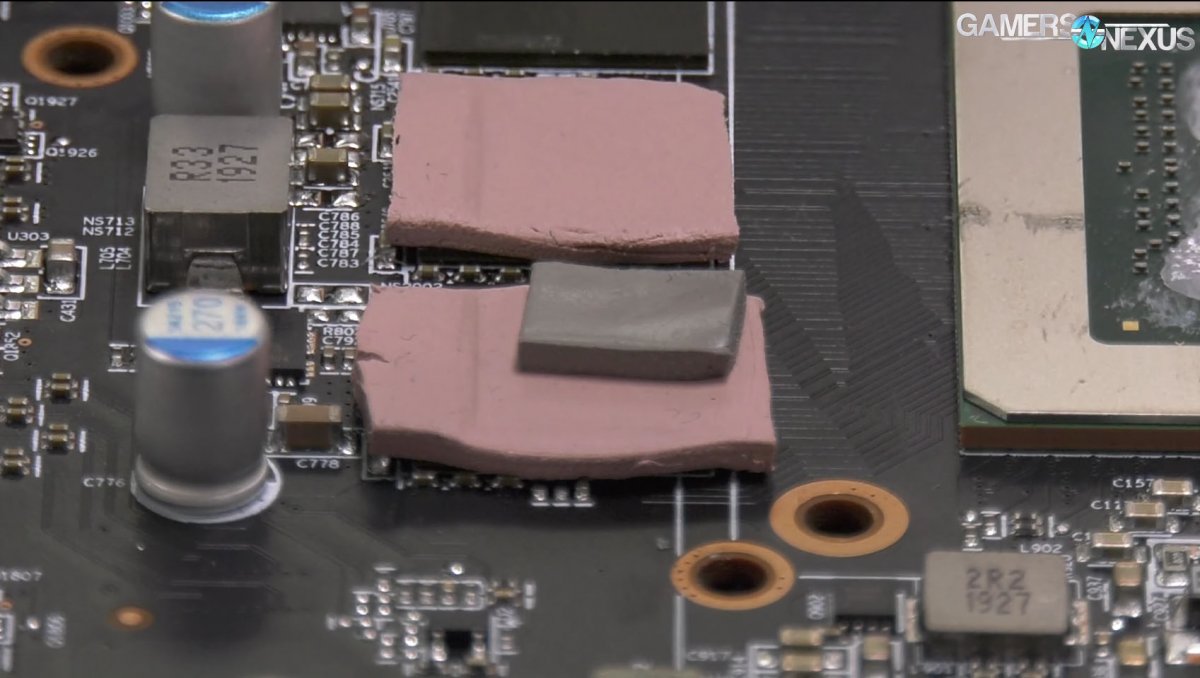 This content revisits a flaw we discovered in our tear-down of the MSI RX 5700 XT Evoke OC. The initial testing revealed memory cooling issues, where GDDR6 memory temperatures plotted far above what we thought the cooler capable of allowing, and the tear-down showed why. MSI’s thermal pad placement on the GDDR6 memory is off-center, significantly so (the center isn’t even covered on some modules), and is also disadvantaged in that MSI used about 40-50% of the necessary thermal pad sizing. For one reason or another, the card left the factory with truncated thermal pads, significantly limiting performance and ability of the memory to actually use the large heatsink above it. Without any interface to bridge the memory to the heatsink in full, performance was lackluster, and we wondered if we could fix it with a few minutes’ of work. It’s not even fair to call this a “mod,” really, as the glitz and glam of modding makes no appearance here. We took a few screws out, put new thermal pads on, cleaned and re-pasted the GPU, and then tested it. Pretty simple. The thermal pads we used are Thermal Grizzly’s Minus Pad 8 series. There are 8 GDDR6 modules and each is roughly 12x14mm. You will need about 1344 square millimeters of thermal pad coverage, so that’d cost about $12-$20 if you can find a higher thermal conductivity kit in a small size; unfortunately, it appears that only the unnecessarily large kit is in stock, so cost goes up there. There are a lot of thermal pads on the market, so just pick something with decent conductivity and a 2.0mm height. The Thermal Grizzly Minus 8 solution can be found on Amazon in the 100x100x2.0mm size. The smaller 120x20x2.0mm kit would work great, but is out of stock right now. We linked it anyway.

As a reminder for testing, if you’re attempting to validate any such changes independently, make sure it’s not ad-hoc and is controlled. All fans in the system must be controlled – no auto anything – and that includes the GPU fans. The ambient must be controlled or at least known run-to-run. A known power load must be applied to the GPU, and it has to be repeatable. For our testing, we measure power consumption only to the GPU for each test, allowing us to determine if a run pulled the same current run-to-run, thus helping eliminate any invalid testing as a result of software variance. We also control fan speeds on the GPU (to 40dBA noise normalized) and actively log ambient temperature, which is controlled to 21C. No fans are present on the open air bench. The rest of the testing uses our GPU test bench, detailed in our Sapphire RX 5700 XT review. 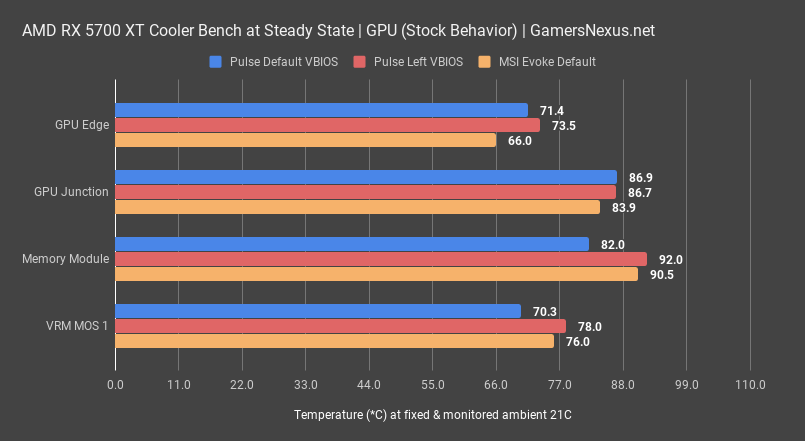 We’ll put a reminder chart on the screen. In the original testing, we saw that MSI’s Evoke OC card performed relatively poorly in memory and MOSFET temperatures when compared to the Pulse card. Left to auto-control itself, not even with the reduced fan speeds we use for noise-normalized 40dBA testing, the Evoke still struggled with memory temperature at 90.5 degrees Celsius, which is approaching uncomfortable territory for the GDDR6. Inside of a hotter case or in a higher ambient temperature – we were at 21C and open air – you’d easily push that higher. GPU thermals were fine when everything was auto-controlled, but MSI runs louder here than either of Sapphire’s profiles, and also has a more aggressive GPU temperature target. The cooler, though, is inefficient, as it doesn’t cool everything properly, only the GPU. 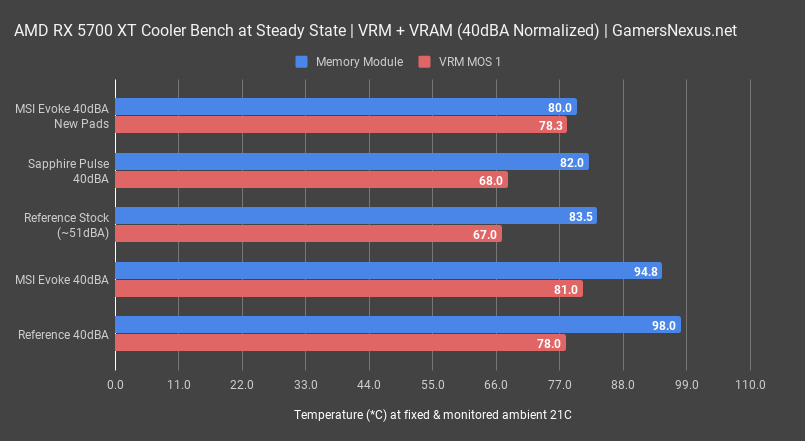 Getting into the new chart, we’re sorting by memory temperature as this was most directly affected. The MOSFETs can take much higher temperatures – approaching and sometimes passing 125 degrees – and so is of no real consequence here. Nothing is hot enough to matter. That said, we still saw some VRM thermal improvement in the sensors, moving from 81 degrees to 78.3 degrees. This small shift isn’t surprising when considering the proximity of GDDR6 memory to the MOSFETs measured, and pulling heat away from that section of PCB more efficiently can have a knock-on effect for the MOSFET, though not much of one.

The memory is what we changed. For this, with a fixed, controlled fan speed of about 1750RPM – the same as we used last time and with a noise-normalized target of 40dBA – we end up at 80 degrees for the new result. This is not only a massive reduction of about 15 degrees from the MSI Evoke original result’s 94.8 degrees Celsius, but also a jump to the top of the chart. We’re near error to the Pulse at the same RPM, although the Pulse maintains an advantage in VRM cooling from its isolated cooling plates. That matters much less than GPU and memory thermals, though, and it seems that our $12 mod has paid off. That, by the way, is the cost for a consumer buying a few memory module’s worth of thermal pads.

We’re going to put some footage on screen of MSI’s China-based factory momentarily, hopefully helpful in illustrating that this isn’t some small company. MSI told us when we toured the factories that it manufactures 1.6 million motherboards per month and 1 million video cards per month, and that’s just in this one facility. The price breaks and economies of scale for a company which needs millions of units’ worth of thermal pads per month have to be enormous when compared to a single consumer buying retail, where you’re paying for Amazon’s listing fees, multiple shipping payments from the factory to the retailers and distributors, and the manufacturer’s margins. The point of all of this is to highlight that MSI cut a few thermal pads to about 40% of their necessary size to save what probably amounts to pennies, if not fractions thereof. Fixing this problem wouldn’t even affect retail price, this can fit well within the margins. Even if you multiply this across thousands of Evoke cards, that just doesn’t seem like it’d save an amount of money that’s worth the reputation damage. This isn’t a cheap card, either – it’s more expensive than the Pulse and includes less hardware on the PCB itself. It’s completely possible that this was a mistake by MSI and that the PMs and engineers didn’t know about the decisions made at the factory. We hear about this all the time, and it’s unfortunate when good engineering is backstabbed by bad execution or overly aggressive savings attempts at a factory. We don’t know which department is at fault for this, but ultimately, the company has its name on the card, and so the company inherits responsibility.

You can fix this card with a thermal pad purchase, but note that they really need to be cut exactly to the memory module size. Going too large will cause fitment and clearance issues with contact to the GPU. Be sure to double-check Junction temperature after the attempted re-mount, as this can end up skyrocketing if everything isn’t perfectly secured. We had to redo this once because Junction was too high, but a second attempt resolved all issues. You could always add a small washer to increase mounting pressure if necessary, just be careful not to add so much tension that the die cracks. Ideally, you just get a good thermal paste spread, properly sized thermal pads, and it should all be good to go.

That said, we can’t recommend buying this card even though it can be fixed by the user. We want to see MSI fix this at a factory-level. In the meantime, the Sapphire Pulse has done well in our testing.