The new Ryzen CPUs can be arranged in a few different ways: The lower-end initial CPU launches (e.g. 3600, 3700X) shipped with a cut-down version of what the 3950X and 3900X offer, and so they have a single CPU die and an IO die rather than two CPU dies (chiplets). This modular chiplet approach means that all of these are asymmetrical, but that specifically the slimmed-down version, like what’s found on the 3800X we’re testing, is more off-center than we’re used to from the old monolithic approaches. We’ll also be looking at a single instance of 3950X testing as a control for the full implementation of Ryzen 3000.

Because of this asymmetrical die arrangement, we’ve had viewers email us to ask if a Noctua NH-U14S would work better on the Ryzen CPUs than the much larger NH-D15, entirely predicated on the idea that the heatpipe alignment would be more efficient.

A few of the comments we found on reddit include these:

“its not whether you have 1 or 2 or 93 towers, but whether just 1 or two heatpipes end up being the only ones covering the compute dies.”

“This means most if not all cooling solutions available on the market for Zen2 are ineffective, since the dies are set in a asymmetric non-central fashion, and that's why most people can't reach the advertised boosts”

You get the idea. It’s worth trying this for ourselves, since we don’t really trust random internet user data. Thermal testing is hard to get right, and we don’t generally trust anyone’s data but our own when it comes to thermals. We reran these tests two separate sets of times, for a total of a couple dozen verification passes between three coolers and two CPUs.

Noctua is one of the few companies that offers mounting hardware to orient its coolers in both front-back standard configurations and bottom-top configurations and has also publicly spoken out about this matter, mostly dismissing it, so we went with their coolers. Noctua has three models that we’re testing: The 120mm NH-U12S, the 140mm NH-U14S, and the dual-tower, dual-fan NH-D15. Looking at the NH-D15 and NH-U14S, you’ll see that the NH-U14S runs its heatpipes left-to-right, looking dead-on at the fan, whereas the NH-D15 runs front-to-back. This is where a lot of the theories popped-up.

We need to talk about a few important things first, like when these differences will show up in the real world.

First of all, if you’re building in a case, this is all basically totally irrelevant. The position of your case openings and case fans will influence cooling more than the die arrangement ever will. A bad case can’t be fixed by ultra-optimized die-to-heatpipe positioning, and a cooler that only fits in one orientation – likely for GPU or RAM clearance reasons – is obviously only usable in that orientation. If you’ve got a cooler smashed against a glass panel or double filters at the top, it’s going to have a bad time. Likewise, using the top PCIe slot will smash a GPU right up against the tower cooler, which is about the worst possible configuration for cooling. That’s because, obviously, the GPU is a massive heat source that’s potentially responsible for dumping 200-250W of heat into your case. A lot of that is radiative heat off the backside of the GPU, which would get sucked into the cooler. The next aspect is that the GPU acts like a massive wall to airflow, so the fan is going to need all the static pressure it can get to fight the wall in front of it.

These things alone mean that, in nearly every instance of a standard, non-inverted and non-rotated ATX case, a front-to-back configuration is likely the best solution. Not always, but nearly always.

We’re going to get into the testing before talking about testing methods, because most people unfortunately care more about results than about how they’re collected. 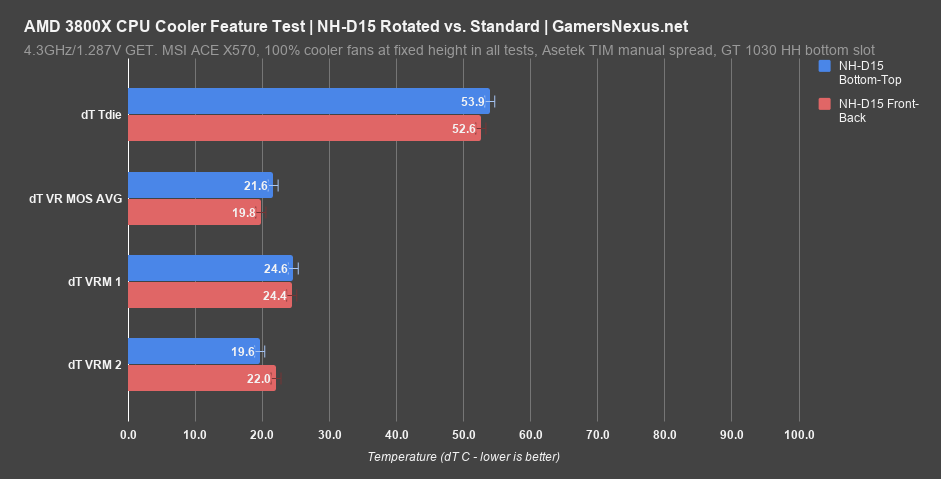 We’ll present the Noctua NH-D15 results on the 3800X first, then talk about the 3950X. They use different die configurations, so this allows us to better see if the heat distribution changes when there is an asymmetrical die layout under the HIS; of course, there is a change in precise position of heat sources under the heat spreader, but the real question is whether that impacts Tdie when considering that solder, an IHS, and a heatsink are part of the cooling solution.

With the 3800X and the D15, we were unable to measure a difference outside of our error. We ran these tests 6 times and ended with a 53.9-degree result for the rotated airflow pattern, e.g. with air coming from the direction of the video card, and then 52.6 degrees for the standard front-back orientation. The video card is a half-height passive GT 1030 in the bottom slot of the board, so it’s as out of the way as it can be, but it’s obviously possible there’s some minor detriment from the video card’s presence. We could not find a reliable difference.

Just for quick reference, we’ll highlight VRM thermals on the board. VRM thermals are largely unchanged from rotation. On an open bench, all variables well controlled, there is zero difference in the rotation of this cooler. Again, the biggest change will come from adding a case and a bigger, closer video card to the mix, which would obviously benefit more from a front-back airflow path than bottom-top. Even if Ryzen 3000 dies cared about this, which they don’t, it would still be cooler to orient it front-to-back in a standard case layout, because the positioning of panels, case fans, and proximity of a big heat source that’s also a wall – the GPU – will all affect thermals more than die layout. And die layout doesn’t appear to affect thermals, either. 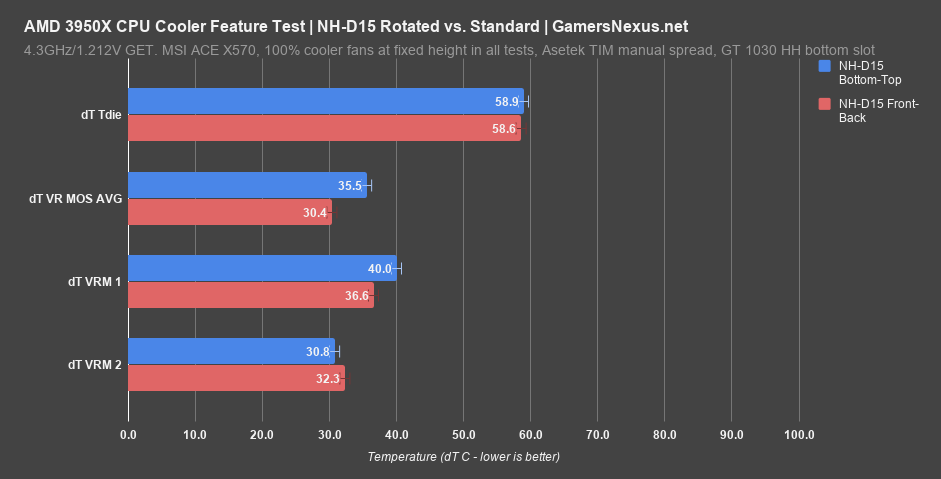 Just in case, we tested the full 3950X chip with this same set of benchmarks. After 6 tests, these were identical. We were at 58.6 to 58.9 degrees, posting no difference outside of error.

VRM thermals were predictably higher for the 3950X rather than the 3800X, but that’s not what we’re comparing today. For the two orientations, the bottom-top configuration ran warmer for the left-side VRM and cooler for the top-side VRM sensor, predictably. 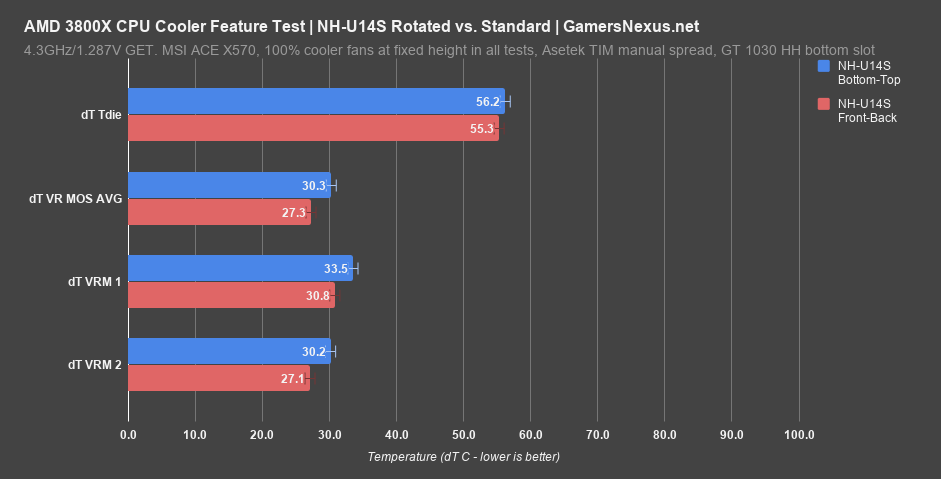 Back to the 3800X, the NH-U14S ran at 56 degrees Tdie when oriented bottom-to-top, or 55.3 Tdie for front-to-back. This is again within error and variance, which is about +/-1 degree. It doesn’t matter what the die layout is. We’ll skip the VRM thermals for this one, since they’re irrelevant and also scale in the same way as the last two sets. 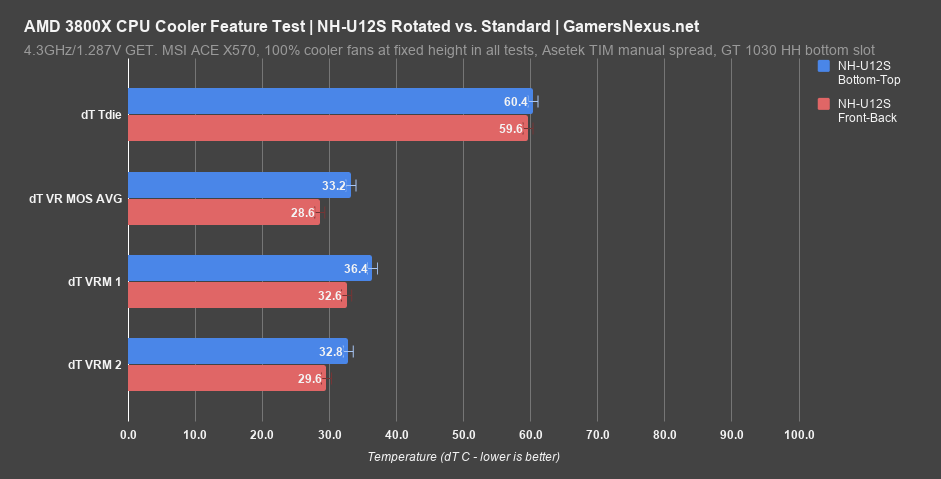 The Noctua NH-U12S on the 3800X can also be rotated, so we tested that one as well. In this instance, the result was 60.4 degrees for the bottom-top airflow and 59.6 degrees for the front-back airflow. Our bottom-top results are technically always between 0.7 and about 1.3 degrees different, always favoring the front-back configuration. Although a pattern is forming, we can’t call this causation. It could be the somewhat distant-but-still-close video card in the lower slot.

As for testing, variables for CPU cooler testing are many, and include the following:

One of the earlier claims we saw get a lot of traction on reddit was that an NH-U14S would perform better than an NH-D15 due to the heatpipe alignment. We were unable to replicate this claim and believe it to be false. We have high confidence in the data collected and, overall, you really should worry more about orienting the cooler to work best with the case and video card arrangement rather than worrying about something as micro-level as heatpipe alignment to the silicon.

You’ll get a bigger change from repositioning the fans, and all of this is irrelevant in a case anyway.