The Basics of Case Fan Placement - How Many Fans and Where?

This low-difficulty guide addresses what I call "fan placement theory," essentially looking at how many fans gaming computers should have, where they should be placed, and what the ratio of intake-to-exhaust case fans should exhibit. Cooling for gaming rigs -- even in the budget build guides we write -- has the power to inhibit gaming (and even damage components) if it is insufficient, so it is of high priority that you get your cooling figured out early in the game to increase the longevity of your gaming computer.

One of the fantastic cases we saw at PAX East '11.

This is part of an ongoing, extensive guide about case fans and cooling. You can expect a feature about fan bearing technology and fan noise level reduction to be published over the next few days. Update: Our guide to quieter case fans and case fan size differences can now be found here.

Similar to our SSD explanation, this "The Basics" guide is broken down into a few key elements: we'll talk about the theory of fan placement and the physical laws behind it in this first article, following up tomorrow with a piece on how to make case fans quieter, and eventually covering the differences between fan bearing technology. Feel free to comment below if you have specific requests or questions, or view our hardware forums for detailed support.

The necessity of case fans (if, like most of us, you don't have liquid cooling) is quite obvious: all that hot air generated by your equipment, especially video cards and CPUs, has to be vented out somewhere and replaced by "new" and cooler air. Trapping all that heat in a confined space with little-or-no escape doesn't help anything, and in fact, it has the potential to damage components (although most modern motherboards, CPUs, and video cards contain temperature thermometers that auto-shutdown if it gets too hot). 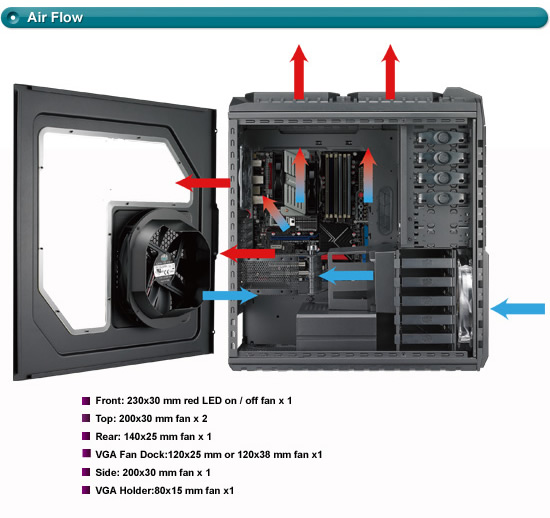 Hot and cold air are sectioned off in a top-v-bottom layout.

When you have devices running at 80C (or ~176 Fahrenheit), it's a good idea to dissipate that cloud through the exhaust ports as rapidly as possible. That said, let's take a look at where intake and exhaust fans can be positioned for ideal cooling (note that it's a simple matter of flipping a fan around to change its direction).

Generally speaking, cool air can be found closer to the ground since heat tends to rise, as dictated by physical law, so we can take that naturally occurring phenomenon and apply it to case cooling for "free air." By following the flow of physics, we can expedite the cooling process and work with nature rather than against it. Here are the basics of fan placement (the bare-bones model):

This above setup pulls air in through the front, channels it through the drive bays (technically, this pushes hot air further into your case, but the benefit of the channeling outweighs the difference in heat), around the video card, and out the exhaust fan. The side fan forces air directly onto the hottest component (the video card), which is then swept up by the airstream produced by the front fan and escorted out of the rear exhaust fan.

If you want to take it a step further -- and this is very beneficial -- you could use a top-mounted fan near the rear of the case (above the CPU and core components) to get rid of that heat even faster.

So what should I get?

It is always our recommendation that you buy cases with a minimum of 3 fans (or at least slots for adding them yourself) for gaming systems, not counting the power supply, CPU, and GPU fans. I know we say this about a lot of things (especially power supplies), but you really don't want to skimp on cooling. Speaking plainly, anything that has the power to destroy your hard work and components should be optimized to, you know, not do that. This applies primarily to cooling and power, though it is arguably applicable to almost any component.

If you have an old case that you want to adapt to modern systems, it is very do-able (and quite easy) to use a holesaw and drill out new fan bays in the top or side of your case, then use a standard drill bit to screw mounting holes. I'll do a guide on this as well. This sort of falls under case modding.

If you don't yet have a case and you're shopping around for one with optimum cooling placement, just look for the following features:

You can't be too picky here, but you need the bare minimum to be certain it will suit your gaming needs:

If the case does not come with more than one or two fans included, be sure to check and see if it has optional slots -- you can always install them yourself with four simple screws. These will likely be almost entirely 120mm fans.

Here's where you get a huge variety of nice cases, so we can be a bit more demanding. Remember, these are the recommended minimum specs for this range, these are by no means absolute requirements:

Here's where you can really get just about everything you want. Look for these features:

As always, comment below or post on our forums for additional support. Our next article (publishing tomorrow) will focus on the amount of air fans can push (CFM), their noise level, and the RPMs. We'll play around with silencing those loud ones, too.