I recently spoke with someone who claimed he'd never divert from AMD, despite what Intel or nVidia have available. For innumerable reasons, brand loyalty and fanboyism leads to ignorance and decreased performance. None of these brands are immaculate and all of them are prone to failures and shortcomings -- in this nVidia vs. AMD for gaming piece, we'll focus on the advantages of each and how you can make informed decisions about video / graphics cards selections for your gaming rigs.

As in class-based games, no one is (supposed to be) "the best." In fact, when researching video cards, posing such a question will result in answers that are backed not by facts, but by personal tastes and loyalties. Don't fall into this hole; instead, ask "which is best for me?" and list your criteria for what you need.

Nvidia and AMD are both great in their respective targeted markets -- and those markets change every 2-3 years -- but here are the basics of what each does well:

These are obviously 'at a glance' and vary greatly with each iteration of technology, but as it stands now, the above is fairly accurate. Here's why:

Nvidia has long supported and funded game development tools and game companies -- whether they provide video cards for testing, put some of their own engineers on a project, or just simply run a joint-marketing campaign, you'll see nVidia plastered across more game loading screens than any other gaming hardware company. Nvidia offers a key set of unique features that are advantageous to developers, and AMD hasn't quite caught up with those yet. The main features are: Programmability, or the option for skilled programmers to optimize nVidia GPUs for specific tasks; Ownership of PhysX, an nVidia-developed platform for physics computations in games; Optimized rendering acceleration, which helps speed up the process of 3D graphics creation (especially in Photoshop, which only uses nVidia GPUs for hardware acceleration).

Of course, the power of CPUs these days does allow more efficient off-loading of special processes (like physics calculations), so as always, allow the benchmarks to do the talking.

Massive amounts of RAM and big numbers don't mean anything if the architecture is obsolete. In the leading position of graphics distribution, nVidia has the edge to invest in innovations more heavily than its counterparts (8.76B market cap for nVidia vs. 4.33B market cap for AMD, which also focuses on CPUs).

AMD has consistently beat-out nVidia in 'firsts,' but nVidia often follows suit and releases a more expensive variation that is, on the whole, a bit better performing. Whether that additional performance hike is worth several hundred dollars is your call as a system builder. Neither model is 'best,' it comes down to how long you're willing to wait and how much money you have.

Nvidia was one of the first in PC gaming to market a high-performance, graphically appealing variation of 3D gaming technology. That is to say, the 3D glasses that -- despite looking somewhat dorky -- are intended to increase immersion. This, of course, can get expensive as it has numerous sub-requirements (monitors, specific graphics processors, and game compatibility), but it can be appealing to those who (a) have an extra $600 to spend, and (b) want the ultimate immersion. You can view our review of 3D Vision here, it's out of the scope of this article.

As with their CPUs, AMD excels in its ability to produce high-performance hardware at an impressive array of price-points. As this is written, the 6850 is one of the absolute best video cards for the price (~$130 for something that performance ~30% better than a 550 Ti). If you're from the future, don't laugh at our petty hardware. 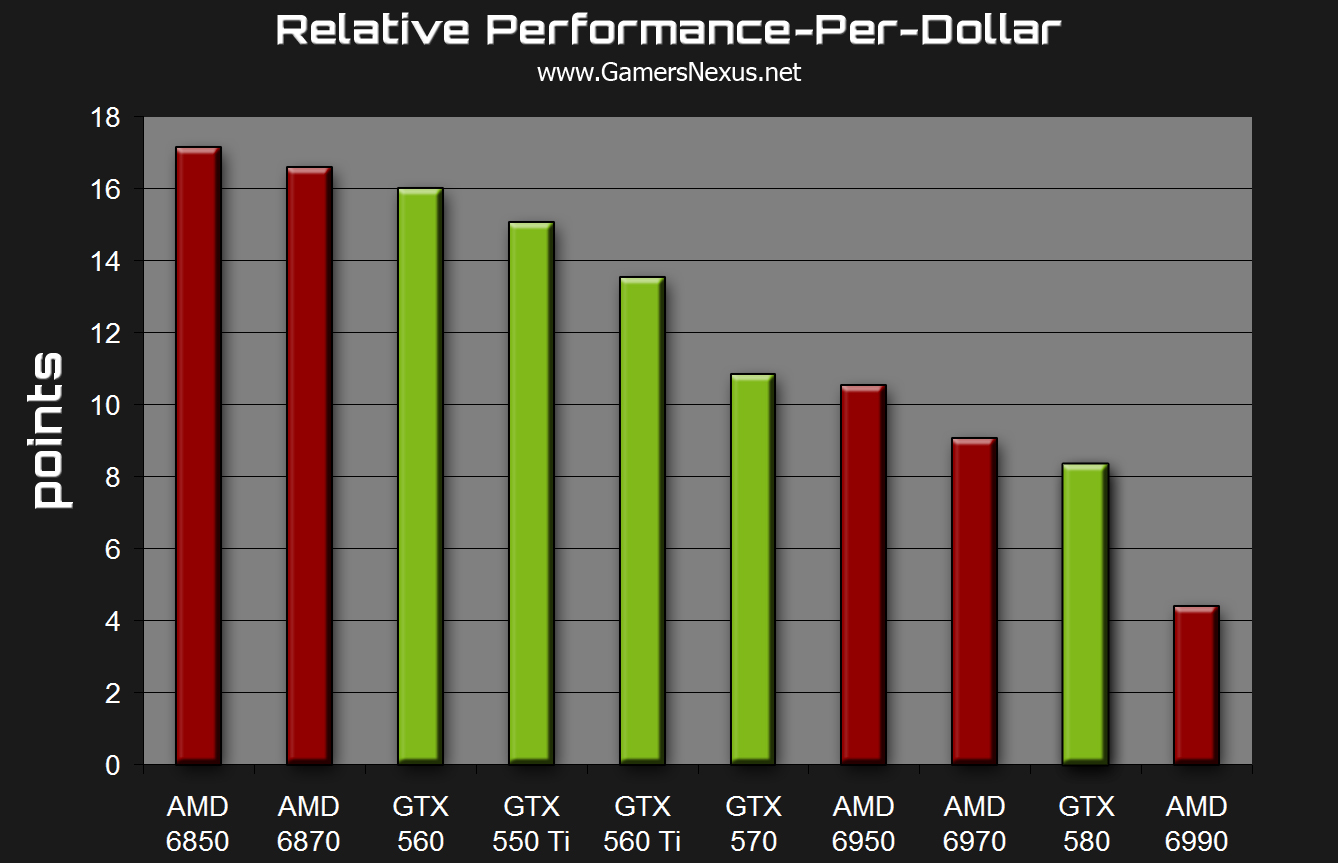 AMD covers the low-to-mid performance range with GPUs that are consistently released at prices of around $130, $160, and then returns at ~$270. This is fairly predictable with each iteration of graphics processing, while NVIDIA often only offers one GPU in the sub-$200 range, and those rarely compete with AMD's similarly-priced video cards (granted, manufacturers play a large part in this as well, but we're ignoring them for this article).

We didn't just call it 'cost,' though, we called it scalability. AMD retains its competitive focus even at the upper-range, and although NVIDIA has repeatedly gained recognition with its high-end graphics processors (notably, the 8800 and GTX 570/580), AMD has a lot to offer and should not be ignored. If you're going to be heavily playing one game, we'd advise you to search for benchmarks on that particular game. It's simple: some games are more CPU-intensive, some are GPU-intensive, and some simply seem to favor one brand over the other for numerous reasons (often sources of funding or preferential testing).

AMD rushes to be first-in-market for a lot of new technologies (risking incompatibilities or other issues in the process), and as proven with this year's hardware release schedule, they're good at being first. The RADEON 5850 and 5870 were the first two GPUs available to consumers that were Dx11 compatible, as an example. So they put cards out fast - but what else? If you glance around any number of hardware sites, you'll see that AMD manufacturers are more RAM friendly, and while it's important to note that more video RAM doesn't equate better performance, it does help in a few key regions (multi-monitor performance eats RAM alive).

NVIDIA has a tendency to instead focus on clock speeds, memory bandwidth, and other technologies, which -- depending on your usage -- are arguably more important. It all comes down to performance-per-dollar, though. Money is always the deciding factor, so look at what you're doing, how much you can spend, and then narrow down your card choices in that range.

The gaming hardware market is far from static: each year, we see advancements on both sides of the graphics war that propel one brand ahead of the other. This progression occurs at predictable intervals, effectively swapping which brand is "best" at any given moment. Nvidia and AMD "take turns" with their products, often leap-frogging the other's technological improvements. This is what you should never side with one or the other; keep an open mind toward hardware and start fresh with each generation.