The Basics of Case Fan Bearings - Which Bearing is Best?

Active air cooling can hold its own as extremely efficient when utilized to its fullest potential -- in fact, in many instances, it's often more cost-to-temperature effective to use case fans instead of liquid cooling. Maybe a future article with benchmarks? This portion of our 'The Basics of Case Fans' guide covers the differences in case fan bearings, sleeve vs. ball bearings, "fluid" (hydro) dynamic, and we'll briefly touch on magnetic bearings.

Now for the fun stuff. Sleeve bearing fans have become the go-to option for gaming performance - primarily due to their affordability and simplicity. Bearing type is often a specification that is neglected when purchasing fans, and while sleeve bearings are certainly the most affordable, a few extra dollars (well worth it, in this comparison) can make for a quieter gaming rig with a longer lifespan. Or, in the least, a longer fan lifespan and less blood pouring from your ears.

The Very Basic Differences between Bearings

There's an entire science behind bearing technology, but we're going to break it down to its core, immediately relevant elements. To quote Bill Nye, let's first consider the following: We have a lot variables at play with fans, so to simplify all info below, we'll first define those variables --

Bearing Type: Simple. This guide will look specifically at the most common choices: Sleeve, Ball, and Fluid-Dynamic (with some variations in between -- dual-ball bearings will also be looked at).

Lifespan: Being an incredibly broad term based on usage, we're basing Lifespan off of a continuous 40C or 50C environment (in hours). It is worthy of mention that many of us are the type (enthusiasts) that will be replacing fans and cases faster than they die, anyway.

dBA Levels: The noise levels (calculated in dBA) will signify the relative "obnoxisity" of fans at initial installation. Remember, fans become less stable as they grow older, so they do become louder with age (in general).

These bearings are pretty basic in design and are used quite commonly in small toys or gadgets. Sleeve bearings use grease or oil-based substances as lubrication to reduce friction at high speeds and are almost never worth maintaining (just responsibly dispose of them if they go bad, it's cheaper that way).

Lifespan & Performance: Sleeve bearing fans are the most common in the computer world and are what we have historically recommended for their affordable nature. Assuming a reasonable temperature (recommended operating temperature is 50C), the bearings should last you around 40k (at 60C) of continual use before replacement.

Noise level: Sleeve fans maintain a relatively quiet noise level throughout life as long as the fan speed (measured in RPM, generally) is low. They have a tendency to develop "whining" or "whirring" noises as they age when mounted in horizontal positions.

Mounting: Sleeve fans are best mounted in a vertical position due to their lubricant system. Sleeve fans can be mounted in any axial orientation, of course, but will 'wear out' more rapidly when mounted horizontally.

Additionally: Sleeve bearings are categorized as "line-contact bearings" - as are those used in varied devices, not just computers - increasing friction due to the relatively high amount of physical contact that the bearings have with the fan shaft.

Fans that use sleeve bearings tend to fail catastrophically, often giving no warning signs before death (occasionally pre-emptive squealing or slowness, but this can be hard to differentiate from other noises). They suffer from immediate failures at temperatures over 70C due to inefficiencies in the lubrication system. Sleeve fans are also volatile at fluctuating temperatures, but in an otherwise-stable environment, they are still a great choice for optimal noise levels and price, despite their decreased lifespan (and relative "half-life" due to rapid deterioration of lubricant in non-vertical positions). Very few fans will be replaced before an entire system is replaced, anyway.

Next to fluid bearings, ball bearings are the most maintainable for bearing replacement.

Lifespan & Noise: Ball bearings last considerably longer than sleeve bearings, averaging 60-75k hours (at 60C) of continual use, though they are a bit louder (around 1-3dBA for low-end, consumer-grade fans). On the same note, lubricant systems in ball bearing fans - which are based on grease channeling - can fail slowly over time, causing a gradual increase in noise (particularly at high temperatures).

Performance: Ball bearings can tolerate higher temperatures a bit better than sleeve bearings, but if you keep your case at a cool temperature in general, you don't need to worry about that. Recommended spec for ball bearing operating temperature is below 70C-80C.

Mounting: Ball bearing fans can be mounted in any axial orientation without concern for degradation of lifespan. They use a point-contact bearings rather than line-contact, and so generate less friction and are less detrimental to the fan's internal components.

Additionally: Contained and cooled server-enterprise environments tend to favor ball bearing fans for their overall increase in performance and longevity; in a server farm environment, noise level is not as much of a concern as it is in a home computing environment, so keep these differences in mind when choosing.

As the name suggests, these bearings tend to be the lowest noise level as a result of the fluid cycling technology used. There are a lot of names for fluid-based fans and the bearings are manufactured by a number of providers, so as a blanket term for this article, we'll simply refer to them as "fluid dynamic" or "fluid fans," but may use "hydro" as well. 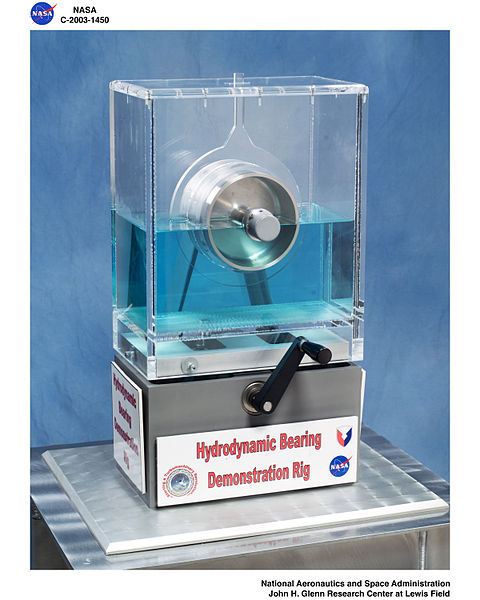 Have you seen these before? They use hydrodynamic bearings. (Image Source: NASA)

Lifespan & Noise: Fluid-dynamic fan bearings have the greatest lifespan -- ranging anywhere from 100,000 hours on the low end (40-70C) to upwards of 300,000 hours, depending on the fan selected. These hours are all projections from tests performed in reliability labs, of course, which simulate the stress a fan would receive by using varied test methodologies -- but that's an entirely different article.

Fans using fluid-dynamic setups remain very quiet throughout the entirety of their life. As a quick comparison, two fans that we used in our noise level test rig are spec'd like this:

Mounting: Fluid fans can be mounted in any direction without hiccup.

Performance: Fluid-dynamic bearings are made for high-performance rigs; they are generally preferential for sustainability and relative silence, while pushing the same or more air (measured in CFM) as other fans of their range. These fans tend to run a bit more expensive - a couple bucks on the consumer level - but are worth it for anyone wanting an ultra-quiet system.

Additionally: Maglev bearings are another technology that attempts to approach silence in fans, but they are not yet widely used and are not covered here.

This is a lot of work for fans. So what fan should I buy?

If your case has fans that are 140mm and larger, you shouldn't experience any intolerable noise levels (just buy fans that are between 19dBA and 25dBA); however, if you've budgeted yourself to a cheap case and are restricted to two or three 120mm fans, it's probably worth getting an epic fan like this. Just remember - if you're spending a lot of money on fans for your low-end case, it might be better to consider putting that money toward a more expensive case instead. You can always add fancy fans later.

- For a more in-depth look at how bearing lubricant recycles, check this relevant Wikipedia page.