Intel's motherboard engineering team wants to change your mind about their boards -- at PAX East this weekend, Senior Product Marketing Engineer Fred Birang told us: "When most people think of Intel, they think of CPUs. We want the gamer mindshare to know that we don't just make a great reference motherboard, we have a board that is as good -- if not better -- than anything out on the market."

After looking at the new Z77-based motherboard line and its plethora of features, we found ourselves agreeing. The feature we're focused on here is the new Visual BIOS, though you can read about all of Intel's latest advancements in our Intel PAX East 2012 overview article.

Navigating any BIOS can be a pain. Navigating the BIOS of an enthusiast-level motherboard, likely loaded with features, can feel akin to stumbling through a Halloween corn maze. 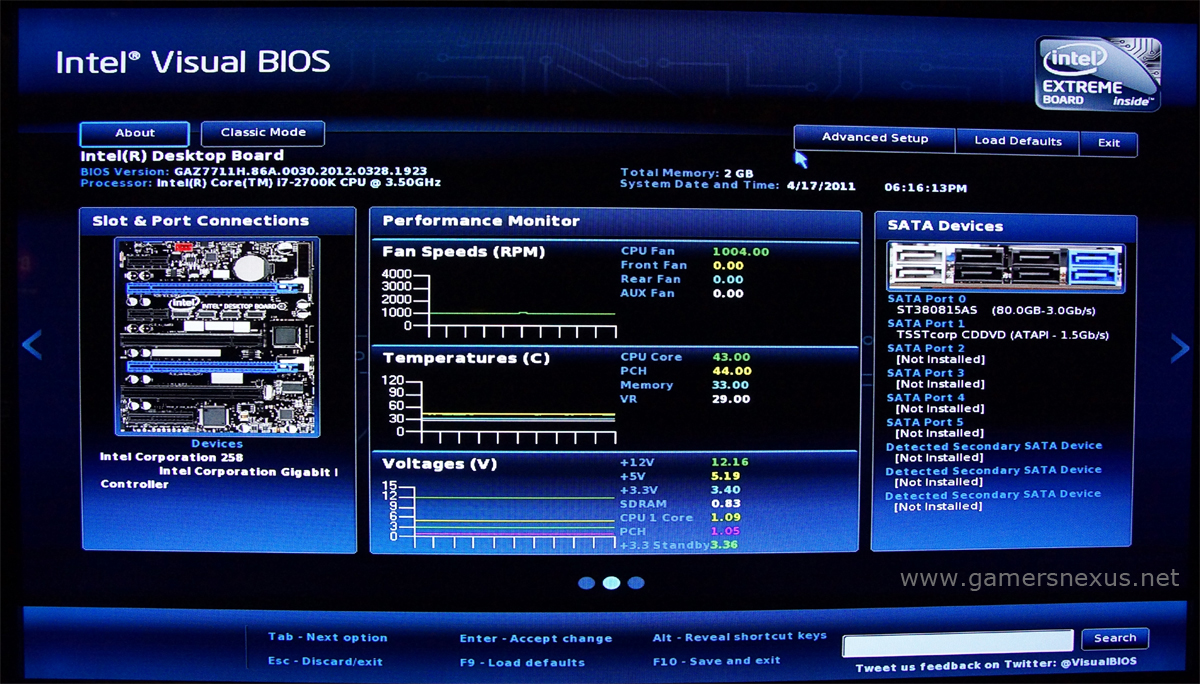 Sure, you've seen a mouse-enabled BIOS before. MSI has one, so does Gigabyte, ASRock was one of the first to launch one, and of course, ASUS has a full-featured version as well. They're nothing new, so what you need to know is what Intel is offering that the other UEFI guys don't have or don't currently do.

There are three modes for the BIOS on Intel's latest line of Z77 boards: Basic, Advanced, and Classic. "Basic" is just that -- make your changes, move the convenient slider bars to the desired clock speeds, save your settings, exit. Simple. "Advanced mode" changes your tab line-up from Processor, Graphics, and Memory Overclocking Assistants to a more robust line, spotlighting Main, Devices & Peripherals, Cooling, Performance, Security, Power, and Boot. At this point in our demonstration from Intel, questions rapidly arose: “OK, so what's the big deal? Aren't those the same menu items that have been in BIOS for quite some time?” Switching between "Classic mode" and "Advanced mode" showed the dichotomy between VBIOS and old-skool BIOS. I've broken down the differences into their major categories for a quick overview below... 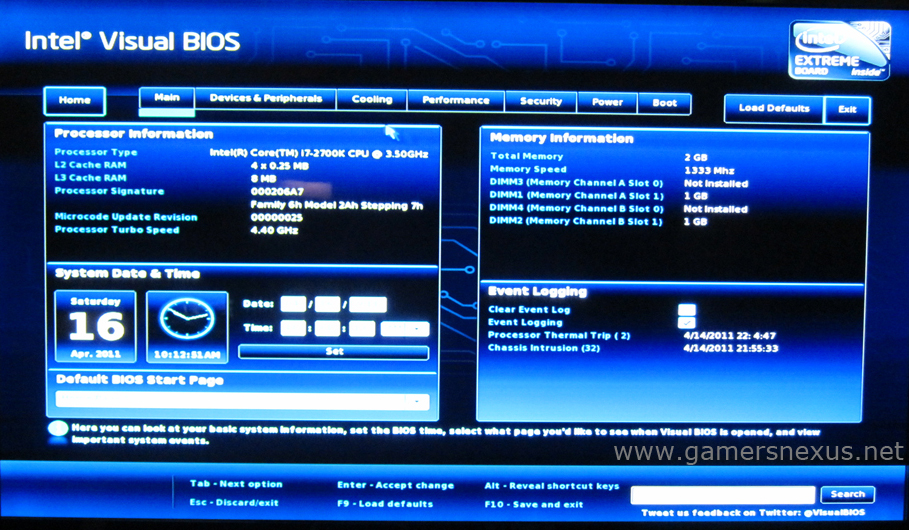 Not only can you use the VBIOS with the mouse and keyboard, but if your system supports it, it's also touchscreen-enabled. That's right, you can physically select your settings with, like, your phalange-enabled peripherals. Couple this with the Bladerunner-esque blue/black schematic and you'll feel like you're overclocking in the future, which is, of course, and important feature on any device.

Intel's message in their recently-released product-briefs for the Z77 based boards:

That's the message. They want everyone to know that when you're using this technology, you don't have to be an OC-guru to make your processor work its hardest for you. Intel has defined preset, fairly safe OC options, but they also allow experts to go above-and-beyond the recommended frequencies. 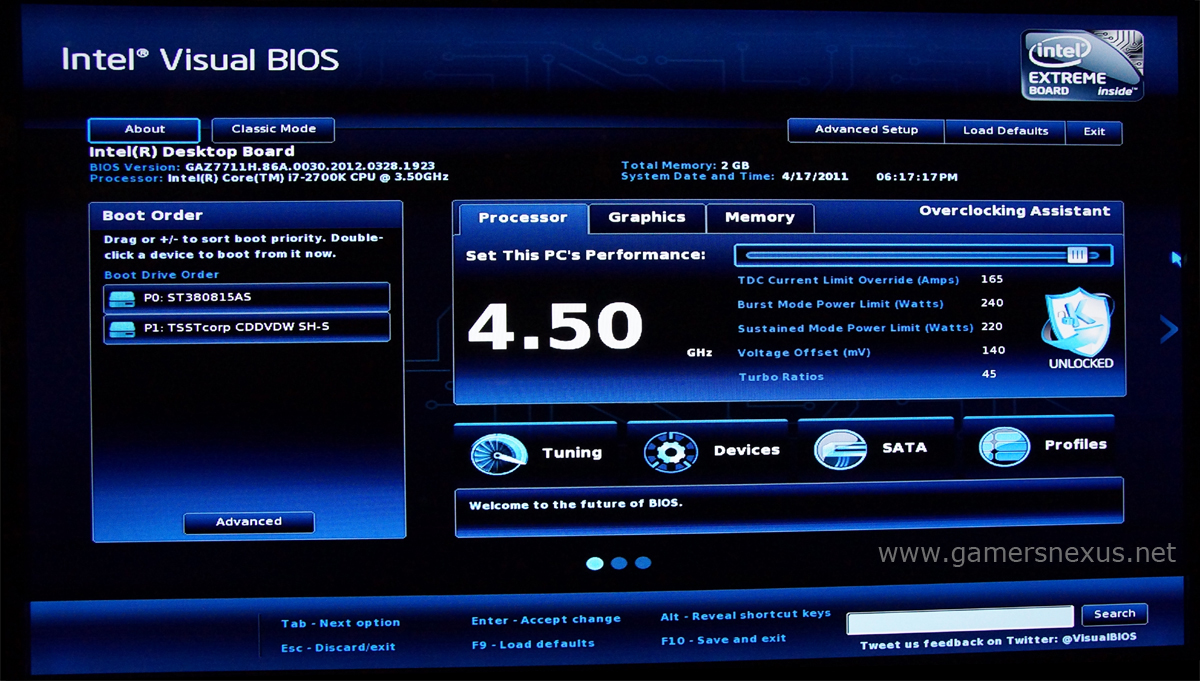 If you want this easy OC methodology at your fingertips or if you're an experienced overclocker wanting to delve deeper, pairing the Z77 boards with the K-Series CPUs (which are optimized to work with each other) unleashes true overclocking potential. A lot of newer boards claim to have easy OC features, and many of them work well, but let's consider something, here: Intel makes the processor. Intel makes the board. What company is going to know the sweet spot on the majority of their CPUs better? As Intel's marketing team proclaims, they're "better together." It works like this: Adjust the slider to your desired OC frequency (let's say 4.3GHz) and Intel takes care of the voltage, power, and current modulations for you based on what usually works in 95% of other systems. Finally, if you are one of those aforementioned gurus (or would like to be), and you manage to inadvertently lock-up your motherboard, there's no need for great concern -- Intel's Back-to-BIOS switch recovery is just a button push away. As we've seen on other boards with similar buttons, hitting the switch restarts your machine using default settings while maintaining your most recent changes as you re-enter the BIOS.

You don't have to start from scratch on your OC tweaking, just pick up where you left off (and hopefully reverse that lock-inducing tweak).

While we were discussing the features of the new BIOS and exploring the setup process of SRT (a topic we'll soon write about, follow us on Twitter, Facebook, or our RSS feed to get an update when it's online) we ran across the issue of changing the SSDs to RAID mode. Alan Clampett, a highly-knowledgeable engineer on the scene, introduced me to what I've been wanting in BIOS since the early days of computing: Search. Yes, searching things! That's right, a fully-functional search engine is built-in to Intel's new BIOS. For demonstrative purposes, Alan simply keyed in "SATA" to the search box, hit enter, and BAM! it brought us directly to the setting we were looking for in a very clean and efficient manner. 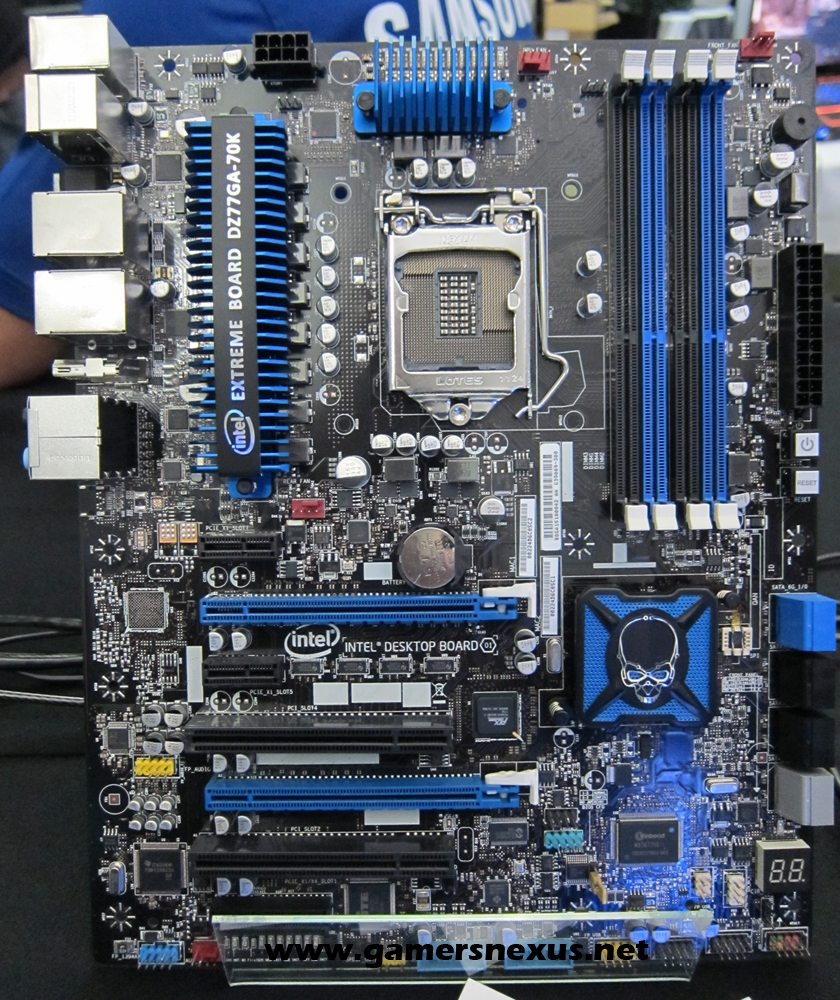 It's all running on this monster.

Another nice little touch involves a bit of user preference. As overclockers, the GN team finds itself at the Performance tab frighteningly often. Intel realized this, and in a valiant attempt to appease overclockers, they've added a convenient drop-down menu that allows the predefinition of which screen BIOS starts up with; titled the “Default BIOS Start Page,” which is found in the "Main" tab under Advanced Setup, this option helps jump straight to what we want -- boot priority preferences, overclocking, and other pages are all available options. If the Performance tab is your favorite place to be, select it from the drop-down menu, click the Exit button, save your changes, and from then-on your entry point will be the specified tab.

While reading through the briefs, I spotted this excerpt in tiny font at the bottom:

1. The Intel® Visual BIOS may not be available at time of launch of DZ77SL-50K product and may require a BIOS update.

Like any new product feature, this one will go through many stages of development. Even the version on display at PAX East wasn't 100% bug free, so the tried-and-true solution for this problem is stay up-to-date with the BIOS releases. Intel once again makes this easy by including a BIOS flashing utility built into the motherboard, so it shouldn't be too difficult to do. Of course, we also recommend you wait for the BIOS iterations to be thoroughly tested and propagated throughout the interwebz before diving into new versions. No one likes bricking a motherboard.

Well, unless you need a brick. I have several, in that case.

While we haven't had a chance to abuse one of these Z77 boards in a lab environment, we were impressed with the one the engineers were demonstrating on the exhibition floor. Intel's presence will pulse through the technology we use in the next generation of processing and motherboard advancements. We were told that Intel's not trying to take-down any of the big players in the motherboard market, they're just looking to gain some acknowledgement and understanding -- "We're not only reference boards," was the recurring message.

Keep it up and bring it on, Intel! Competition only makes the market stronger.

As a final, quick note: Intel is looking to pick up more followers on their @IntelGaming twitter account, so go check them out!

Feedback is always appreciated on my writing. If you have thoughts, comments, or questions please drop your message below and I'll respond. If you have a question you'd like me to pass along to the engineers at Intel, let me know and we'll give them a shout.