With one of the most fun-filled, chaotic, work-focused weekends of the year out of the way (that is, until the next convention), our team came home with an abundance of hardware to review and an enthusiastic approach to new technology analysis methodologies.

This review of Kingston's 240GB HyperX 3K SSD will look at its real-world gaming performance and synthetic benchmark results.

PAX East 2012 saw us meeting with ASUS, who explained their key to success, Intel, where we saw their fancy Visual BIOS, and tons of other hardware companies -- Kingston is included in that list. David Leong, Kingston's resident expert, met with hardware editor Patrick Stone about some of 2012's newest storage, SSD, and memory technology, eventually exploring the company's newest volley into the market: The HyperX 3K SSD, released as an indicator of HyperX's 10th anniversary.

What's in the Box?

Kingston's really pushing the upgradability of their products -- MSRP for the upgrade kit is $10 more (although Newegg seems to list it as $20 more), and it includes everything in this picture: 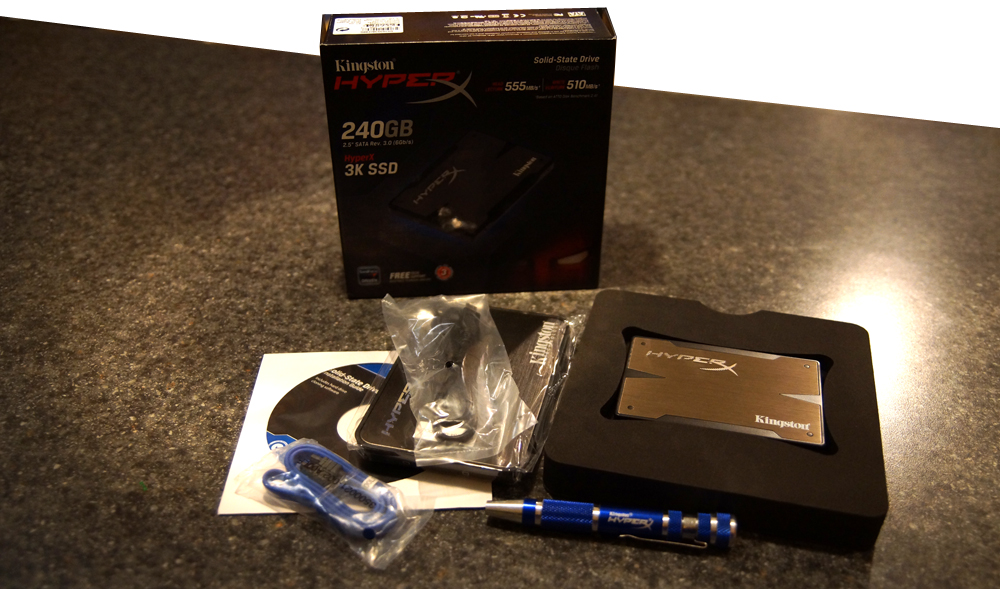 A fancy assemble-able screwdriver, an external enclosure, a special SATA III cable with reduced signal interference, a USB cable, and cloning / porting software. One of David Leong's big notes for us at PAX East was that Kingston's all about making it easy: They don't want anyone to feel pain or anxiety when switching from an HDD (or even a different SSD) to the HyperX or similar products. For that reason, the upgrade kit gets you some simple cloning software that moves your install over to the new drive (just make sure it fits and all that) for you. It's definitely worth $10 at MSRP, $20 is good if you're going to use the software.

You can also use the free Clonezilla tool or Norton's commercial Ghost product.

At $360 for the 240GB version or $170 for the 120GB version, those numbers make big claims and aim to compete with OCZ's Indilinx-controlled drives.

As has been explained in our SSD dictionary, solid-state NANDs are far from perfect: The speed comes with a lifespan trade-off, however negligible it may be to the average enthusiast. The "3K" in Kingston's new drive indicates its erasure cycles before its death; storage blocks on an SSD can only take so much abuse (program/erases) before they're incapable of retaining data, and in the case of this drive, that's 3,000 program/erase cycles (wear-leveling logic - as covered in the SSD dictionary - helps ensure all blocks decay simultaneously, since one dead block will brick the entire drive).

So, then - how long will 3,000 P/E cycles really last? This depends entirely on the user -- if you're erasing and storing large amounts of data frequently, it'll die much sooner than someone who only stores data when installing or saving a game. Leong told us that Kingston's "HyperX 3K drive, writing 3TB per day, will last about 5 years." That might initially sound like a lot of data per day, and it sort of is, but written data included in this metric accounts for service log files, page files, background processes, and of course browsing data or other daily activities. The point is that "writing" data doesn't have to be an active, user-instituted event -- processes are writing data all day, every day. Every log file counts. In the time I spent refining the last two paragraphs -- about four minutes -- HD Tune reports that my system has written 30MB of data. My extended usability test shows that my system (the "my" bit is important - this will vary from machine-to-machine) writes around 4GB per 90 minutes. In a 90 minute period of non-gaming usage (watching SC2 YouTube replays, typing, browsing), I blew through 4GB of file writes and 184MB of reads.

For most of us, though, drives are replaced with each iteration of PC build we do -- personally, I probably go through drives every 2-4 years. There's no need to worry about death of a drive if you're in that range.

Let's take a look at synthetic benchmark performance and real-world / gaming performance with this SSD.