Electrostatic Discharge is something that we actively take measures against to ensure no components are inadvertently 'fried' in our build videos; accumulate enough static electricity and discharge it into that shiny, $300 video card, and you've suddenly got a very expensive brick on your desk.

It's easy to prevent ESD, but understanding it is important. Whenever you hear someone refer to "frying" a component, although a generic term, it tends to imply overvoltage (through overclocking or other means) or ESD death. Non-conductive insulators, as the name would imply, can carry a charge (to include things like paper and cardboard), but some materials are safer than others. Properly grounding yourself (or your desk, for that matter) will reduce any concern of ESD when working with high-end components.

We'll keep this guide short and packed with info on how electrostatic discharges work.

If you're interested in this type of guide, you may also find our Preventative Maintenance guide useful for extending your system's usable lifespan.

What is ESD (electrostatic discharge)?

Having recently come out of a lab testing environment, it was a constant concern to keep our workstations ESD-compliant for when the inspectors came around. The rules were certainly more strict in a workplace than they should be at your house, but some of these 'rules' are a good idea to follow when building up a new system. Similarly, I'd highly encourage you to at least take basic measures (below) against ESD when working on a friend's or client's computer. You don't want to be the catalyst for failure.

ESD is a result of static electricity build-up and the transfer of charges - in this case - to the operator. Anyone familiar with that 'zap' or 'shock' received when touching a conductive object after handling insulators has experienced an electrostatic discharge. Handling multiple charged insulators (like paper) will eventually build your own charge to the point where it will 'seek' conductors for a non-inhibited path to ground. That small zing, though, carries enough current and voltage to render computing hardware useless. Semiconductors, like those found in CPUs and GPUs, are particularly prone to failure from ESD.

ESD sparks carry a charge - upwards of a few thousand volts - but electrical circuits can be obliterated by very small charges (30V is more than enough to brick a video card, though the current is more important in determining damage). Discharge of static electricity is not always felt by humans, so it's important to remain grounded even if you don't think you're carrying a charge.

The ESD Association helps create and maintain standards for ESD compliance in electrical equipment; most hardware manufacturers will abide to ANSI, a standard defined by the ESDA, for best compliance.

Static electricity is caused by the triboelectric effect, "in which certain materials become electrically charged after they come into contact with [a different] material through friction." Static electricity runs rampant in dry environments, carpeted rooms, socks, and when interacting with multiple materials or wearing static-friendly clothes (like wool).

Accumulating a charge can be as simple as walking across your floor.

How do I prevent ESD build-up in my system-building environment?

Simply touching a case interior won't necessarily ground you -- the object must be connected to ground and must be capable of discharging electricity. Most modern gaming-grade cases have interior paint covering their metallic walls, so touching the paint won't do much for you. 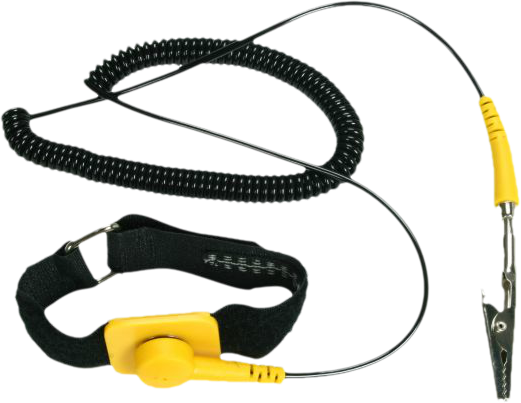 There are multiple schools of thought for proper ESD diffusion and many different approaches to remaining grounded when building a system. I'll cover each major option in a clean pros/cons format below:

One of the most accessible options for controlling your ESD is to attach the ESD wrist strap's loop/clamp or ESD mat's grounder to the center screw of AC face plates, which will allow for safe discharge. An ESD mat will provide a surface upon which you can tinker with components externally in a secured environment; testing hardware prior to installation is always a recommendation of ours, so if you have the extra money and room to set up a proper 'test/build bench,' this is a fun and safe route for enthusiasts.

This is the safest method -- assuming the house was built to code and isn't too old, you'll be grounded for sure -- the charge is carried straight to ground along the path of least resistance. It's also quite simple to test whether the bolt is grounded (described below this section). We'd recommend getting an ESD strap with a grounding loop on the end (rather than a clip) if you'd like to use this method, as it will remain firmly attached to the mount.

If your outlet has a third prong (ground prong), chances are you can clip-in to the screw. If you want to be certain, grab your multimeter and set it to read volts in AC. Define the range to 120VAC if it is an analog multimeter. Create contact between one probe and the bare faceplate screw, then insert the other probe into the short slot. The box is grounded if it reads-out as 120VAC. If you don't get any reading, move the probe in the short slot to the long slot -- you should get a reading at 120VAC, but if you do, it means the outlet is reverse-wired.

Method Pros: Confidence that you're grounded.

This is what most people will recommend you do: "Touch something metal throughout the build process." While well-intentioned, you need to ensure the object is more conductive than you are -- painted metal, for instance, can still siphon a charge out of you, but won't do it as efficiently as a direct path-to-ground or more conductive, non-insulating material will.

Grabbing your interior case wall will often be good enough for most builds, but there's no guarantee about it. Especially if it's painted. Look for lamps or other objects which have a clear path-to-ground. Touch them every few moments to discharge any build-up.

You could use the below method for an in-between option if you'd rather not connect to a faceplate but would still like to have confidence in being grounded.

Method Cons: No guarantee of grounding; you can pick up a charge at any point in the process.

A Compromise: Grounding to the Case

We build systems on a daily basis for our guides and reviews, so our process was designed to be efficient and effective. Our build environments are humidity-monitored (you can purchase a cheap humidifier or open the windows if your house is dry) and, depending on where we're building, we don't always have easy access to a faceplate. If this is the case for you, here's a simple method that should do the trick:

This system forces any discharge through the power cable and directly into ground (the third prong on your connector); the charge will bypass volatile components and leave them unharmed.

Alternatively, if you build systems frequently or have a bit more money on-hand, ESD mats are also an option. ESD mats are what I used when in the aforementioned lab environment -- with the nicer options, you can connect your ESD wrist strap directly to the mat (which will lure any charge you have out of you) and get to building. These also provide a suitable surface for out-of-case modifications; installing the CPU or heatsink externally is often significantly easier -- it's also good practice to test components before installation -- and this can be done with confidence when operating on an ESD mat.

Method Pros: A reasonable level of confidence in being grounded. Quick and simple.

Method Cons: Painted surfaces can be cause for a gray area in your confidence. 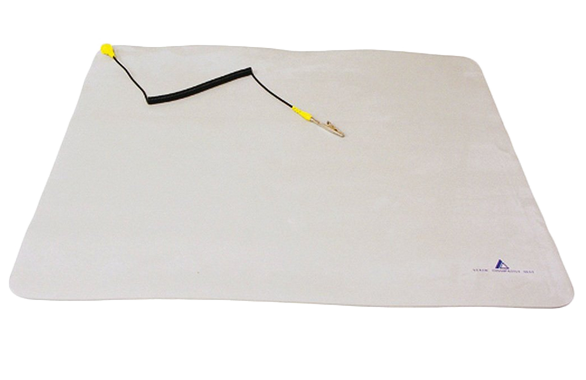 A generic ESD mat that provides a safe testing area.

Isn't this all a bit extreme? I've never zapped anything and I don't ground myself.

The short answer is: Yes, these measures ('touch metal things' aside) certainly do go above-and-beyond the "I won't shock anything!" mentality.

Chances are, if you take some precautions (next section) and touch grounded objects occasionally, you'll be fine. Most likely. That said, I've certainly ESD'd some parts to death before completely unexpectedly. You might not even feel the discharge -- work on enough systems without being properly grounded (or live in a dry environment) and you'll eventually kill a component inadvertently.

Don't wear socks! No, seriously, don't rub your sock-enclosed feet on carpet while building. In fact, let's just list the things to do / not to do:

If you have any questions about electro-static discharge, system building, or need build component selection advice, please comment below or visit our forums for in-depth support!