CLCs have been the center of a burgeoning demand for quiet and effective CPU thermal dissipation lately, but they're still fully-capable of spinning fans just as fast and producing just as much noise as a 4000RPM air cooler. In terms of making your "air vs. liquid" decisions, it's really going to come down to appearance and temperature-vs-noise benchmarks; we've previously explored how air coolers are built, and from that research, it's quite clear that air units aren't going away anytime soon.

We'll outline the specs for each unit before delving into the basics of how liquid coolers function (being that this is our first review of CLCs), the objective performance data, and other notes.

It's the same concept, really: The radiator is a composition of an outlying metal frame, hosing, lots of aluminum fins, and a couple of fans. At the most basic level, a computer's closed-loop liquid cooling system (or any CLC, really) works as follows: 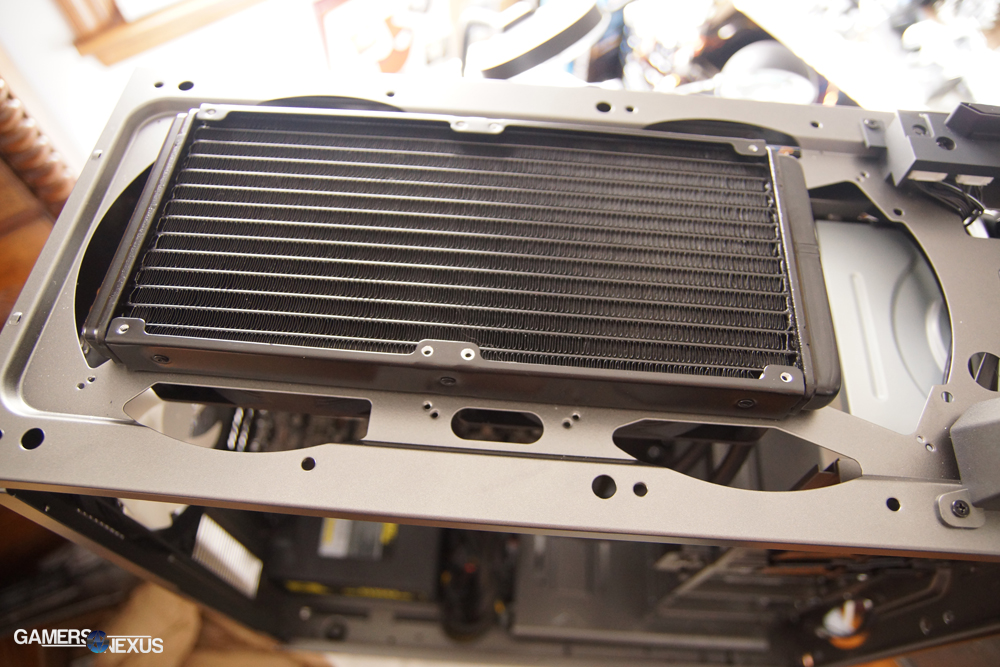 Let's start at the source of the heat. The CPU generates a substantial amount of heat which is then conducted to the copper cold-plate using microfins to maximize surface area and dissipation potential. Copper has the highest thermal conductivity of all the affordable metals available to us in the world of computing (about twice the thermal conductivity as aluminum at 25C - ~400W/mK), and so is almost always used in cold plates for CLCs.

Thermalpaste sits as a thermal interface between the CPU's IHS (integrated heat spreader)—which is an imperfect surface—and the cold plate itself. The objective of thermal compound, as we discussed previously, is simply to serve as an intermediary thermal transfer medium between the imperfectly smooth surfaces of the IHS and cold plate. A total lack of thermal compound would mean air fills those pockets in the surface, which heats up and gets trapped between the CPU and cooler; thermal compound averages ~6W/mK or higher, making it an infinitely more effective thermal transfer interface than air, but still several factors of magnitude lesser than the copper surface. This is why too much thermal compound is a bad thing, but just enough creates an effective cooling source.

So heat goes from the silicon die (mounted on a substrate) to the IHS, into the copper interface, and is then conducted further upward. This is where the liquid comes into play: Using (usually) an electrically-safe coolant, the pump cycles liquid through the CPU cooling block and ducts heat away from the microfins; rather than using physical state phase changes, like in liquid-to-gas air cooling capillaries (below), the heat encounters cool liquid from the rad and is effectively whisked away, warming up the liquid for its return trip to the rad. 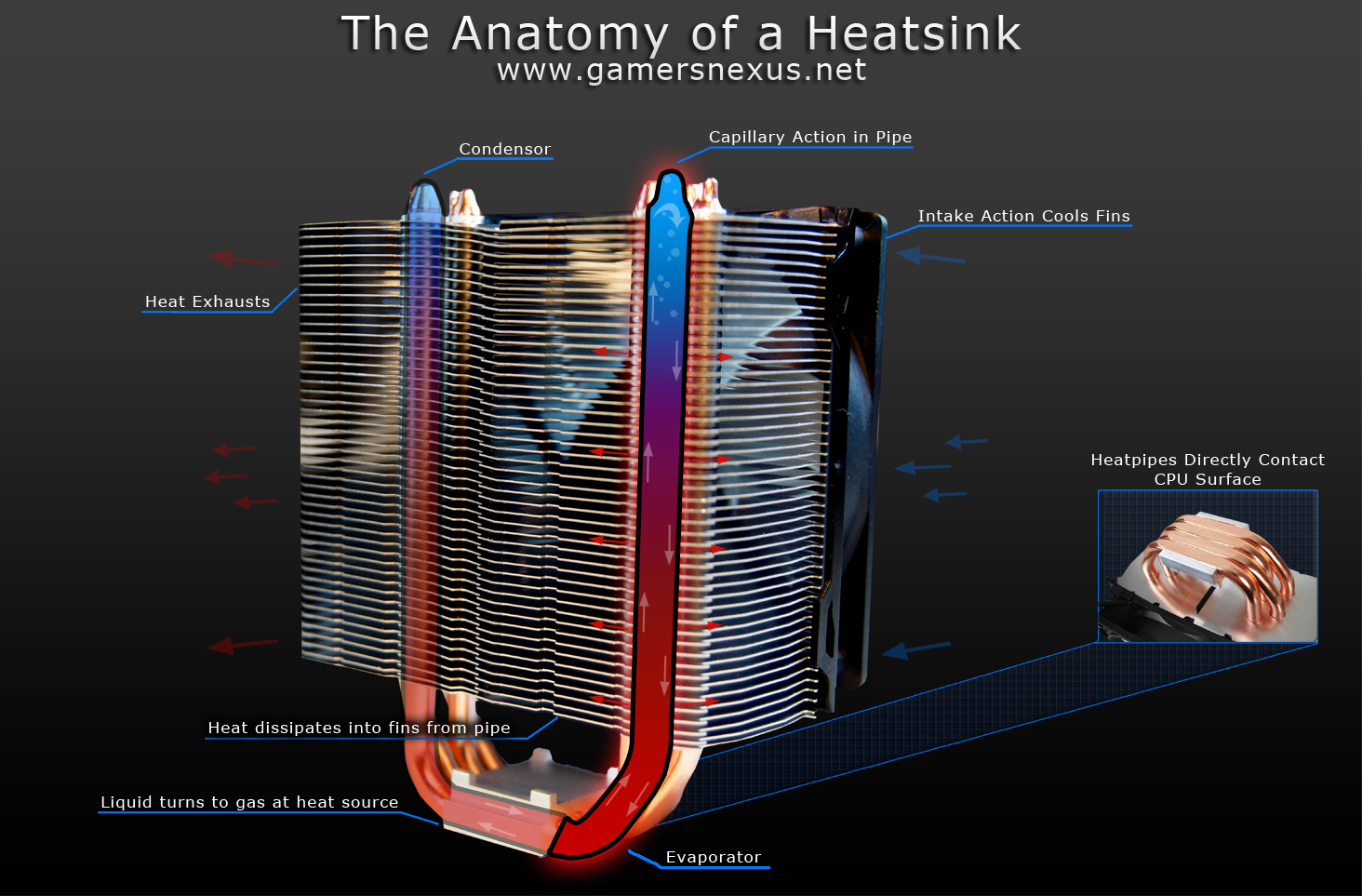 The liquid is pumped out of the block and into the intake tube via the CPU pump (at speeds measured in Liters-Per-Hour or pump RPM). Because I figured most of you wouldn't be keen to destroy your new CLC, I decided to take apart one of the Asetek-supplied models we tested -- here's what the actual pump looks like: 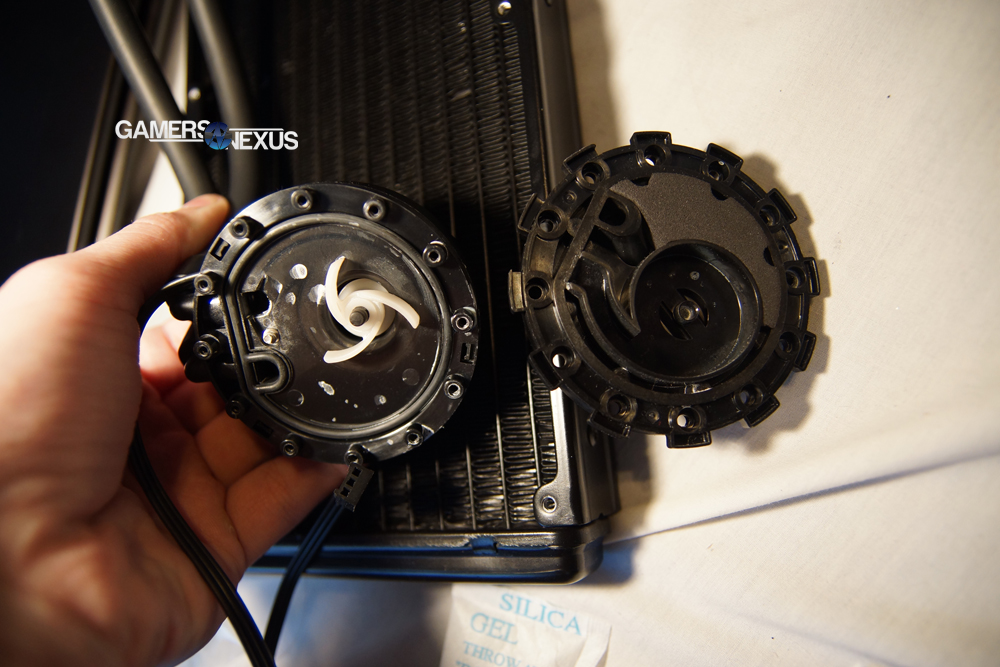 The little rotor spins at somewhere in the range of 2000-3000RPM for most Asetek-supplied pumps. The heated coolant eventually reaches the radiator from the insulated rubber hosing, at which point the liquid is directed down aluminum-walled piping within the radiator. Hundreds of aluminum fins line these pipes; basic laws of physics tell us that heat will do at least two things in this scenario: It'll try to achieve equilibrium across the thermally-conductive surface material (and thus will travel outward, sprawling across the aluminum fins, which are colder than the pipes), and it will move along a path of least resistance. As heat is conducted into the tiny fins, the air blown into the radiator from the fans will dissipate the heated air up-and-out of the case, maintaining a fin temperature that is conducive to the cooler's dissipation objectives. 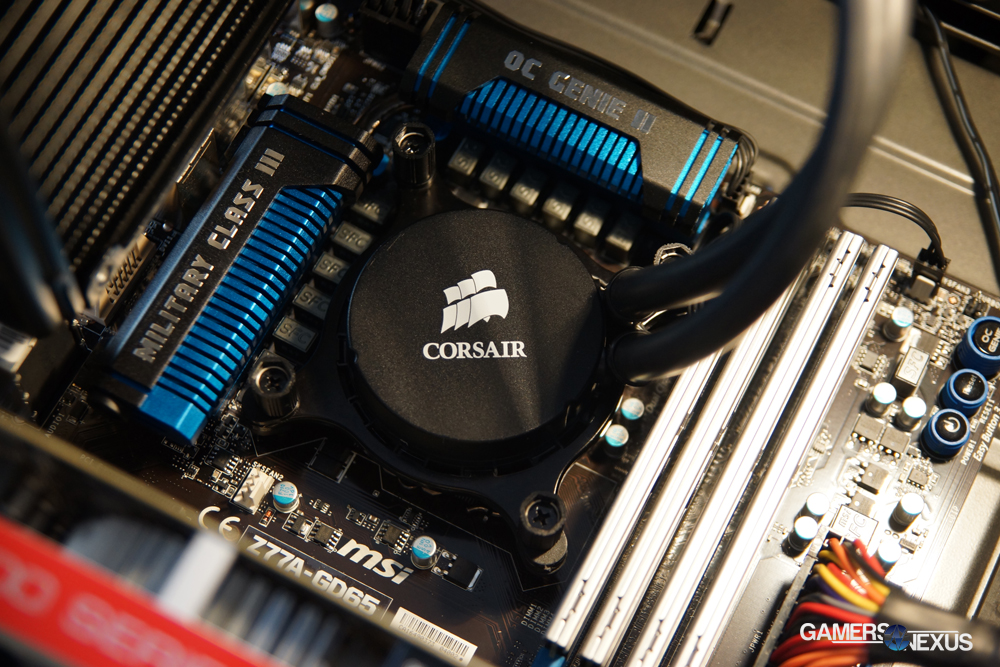 Throughout the entire process described in the above paragraph, the coolant can be seen as 'shedding heat' and thereby being cooled by the dissipation and air intake processes; once it has completed its journey up-and-down the radiator, the now-cooled liquid reaches the return tube, where it is pulled back down toward the CPU block via the pump. The cool air reaches the block and the process begins anew.

The cooler the liquid is, the greater the potential for cooling the CPU.

What's in the Boxes?

All the boxes basically ship with the same items: You get your radiator, pump, tubing (all bundled in a pre-assembled package), mounting brackets, and fans all neatly packed away. The Corsair H90 and NZXT Kraken X40 both use identical (or almost identical, for purposes of performance) radiators and pumps, with the Kraken having hosing that is slightly longer and a customizable LED on the pump (as found on the i-series Corsair coolers). The same is true for the H110 and X60, which are just larger versions of their lower-number-identified brethren. 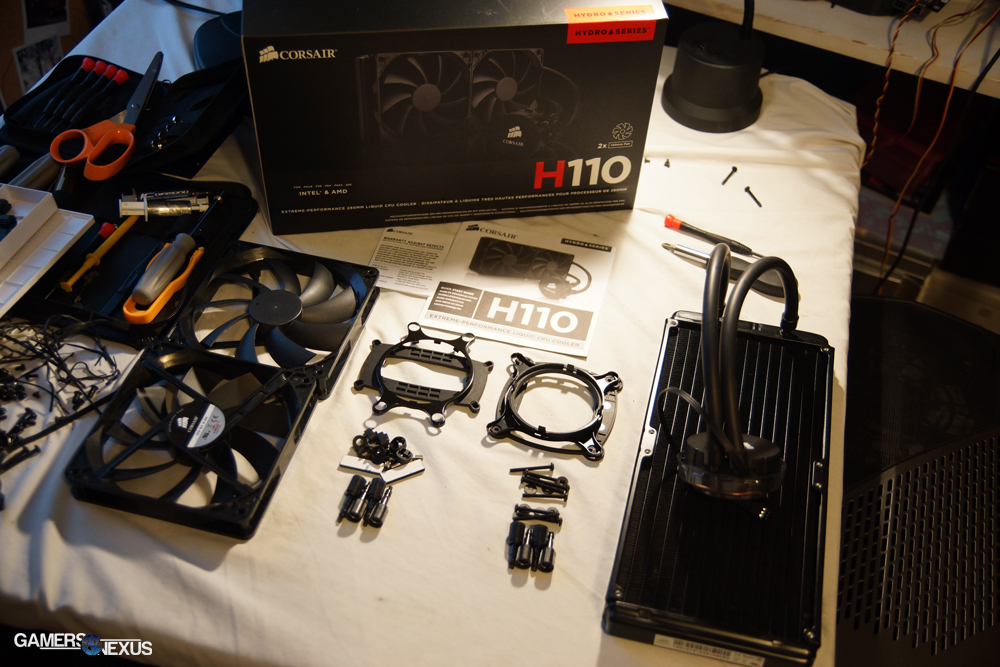 The only notable difference in contents shipped would be between the smaller (140mm) and larger (280mm) units, where obviously additional fans/screws are present. On the whole, everything you see above is what's included in all the boxes.

Continue to the next page for results and an interesting discussion on a supplier-driven hardware industry. (Sorry, we hate to paginate things, but the page would take forever to load otherwise).