Following-up with our Genius DeathTaker and Logitech G600 reviews, and our Logitech pre-PAX round-up, we're now looking to Genius' Gila (pronounced hee-la), a high-end gaming mouse. This review looks at the Genius GX-Gaming Gila MMO/RTS mouse and includes a look at the insides and software in video format; you all told us that you wanted more peripheral content, so this is very much in response to those demands!

We originally grouped up with the company at CES 2013, where Genius representative Sam Chou informed us that the company was taking its first steps into the world of gaming peripherals. If the Gila, DeathTaker, and their speakers do well, we were told, they'd consider the possibility of mechanical keyboards and other high-profile gaming equipment.

Let's see if the Gila did well.

The above video should give you the best feel for how the mouse looks and holds.

Before diving into opinions, let's go over some of the Gila's features and specs.

First of all, in addition to the standard left/right/middle mouse buttons (LMB, RMB, MMB), the Gila mouse offers 9 additional, programmable buttons for a total of 12. Unlike Logitech's G600, the buttons are positioned more liberally across the entire surface of the Gila mouse, making for easier memorization of individual functions. 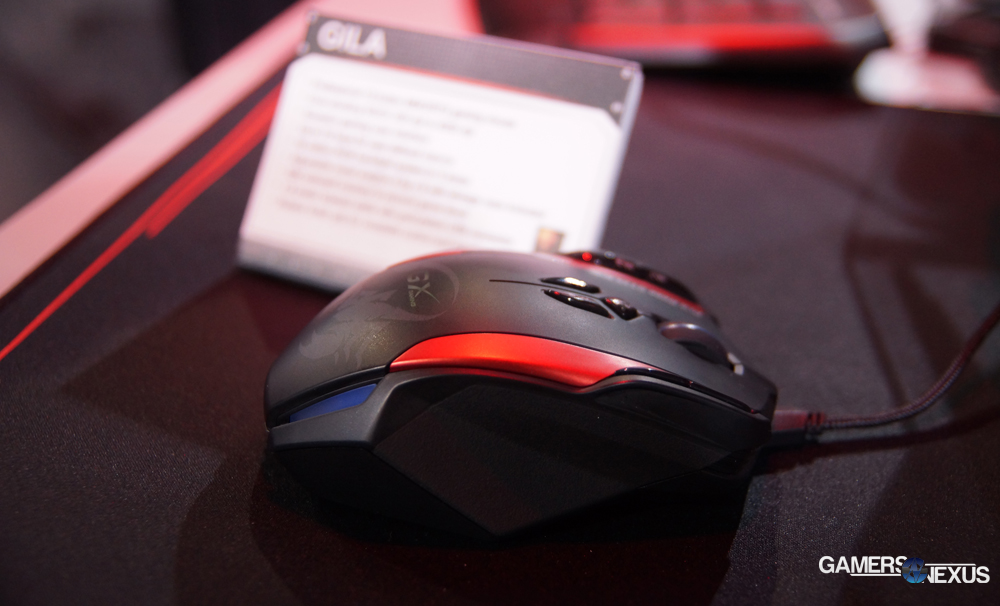 Four of the buttons can be found on ridges in the top-left and top-right of the mouse - two on each side. These buttons are within index- and ring-finger reach, but not close enough to be intrusive to normal clicking activities. Three more buttons are found just south of the mousewheel, one used for DPI staging and the other two are pre-programmed to volume up/down functions. The final two additional buttons are in the traditional M4/M5 positions (left side, near the thumb grip). All buttons are able to be re-mapped to other features, sans the left mouse button.

The mouse uses an Avago-supplied "LaserStream gaming sensor" (the Avago ADNS 9800) that's rated for up to 8200 DPI (200 DPI stepping); this is the same sensor that the Logitech G600 uses, so should theoretically track in a very similar fashion. The ADNS-9800 detects acceleration at a maximum of 30 g and 150 IPS, making it fairly average in terms of what a high-end sensor can output, but enough for gaming applications. The mousewheel is the same that's found in the Genius DeathTaker. 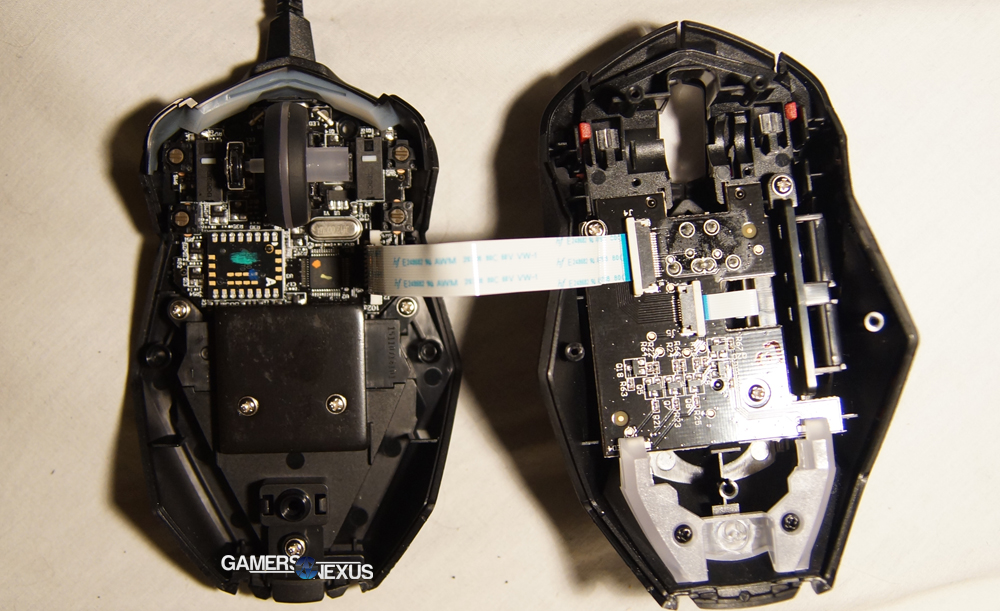 T-MEC switches (seen in brown) are used for the flanking buttons and Omron switches are used for LMB/RMB. The mouse is rated for 8 million clicks, a far cry from Logitech's 20 million clicks, though in real-world use it's tough to say exactly how many times the average user clicks. Just as a quick, anecdotal example (this is not representative of the whole, so don't take it as scientific evidence), both GN's Tim "Space_man" Martin and I have been using our Logitech G5 mice since 2009; the G5 is rated for 8 million clicks, like the Gila, and has lasted each of us approximately 4 years and they're still going strong. Perhaps we'll run a click-tracking test for real-world usage for future metrics, but either way, 8 million should last a good, long time if it's actually an accurate rating. 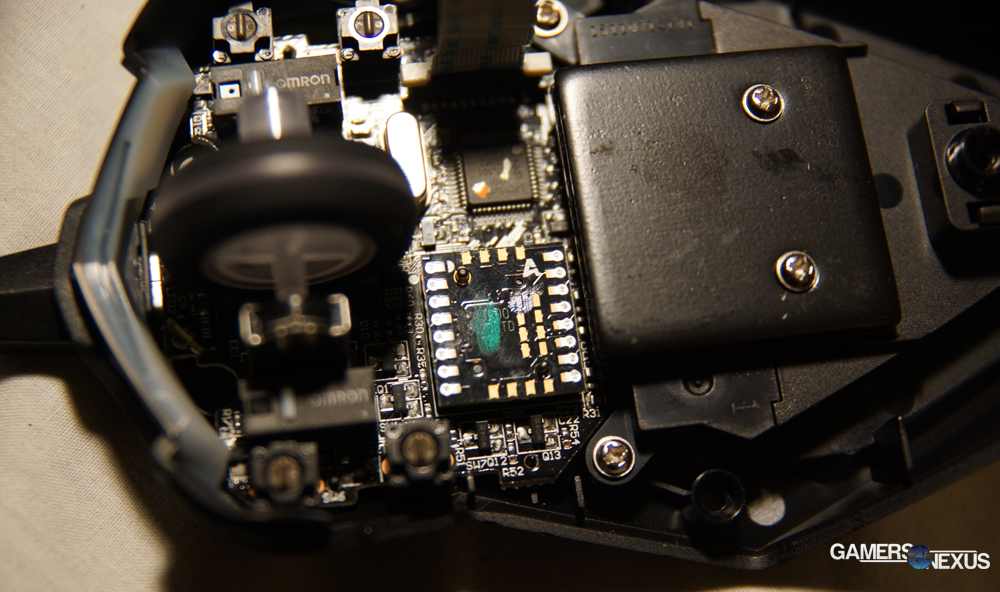 Click for high-res image. The large black block on the right is a simple weight; we see the sensor painted in green, an LCP11U1x module marked in orange (32KB), and other internals.

Sticking to internals for a moment, the mouse ships with 32KB of memory (LCP11U1x) to eliminate key-ghosting issues and profiling; the mouse software makes use of memory for scripting and profile interactions, explained in our below video (see the "Software" section).

Inside the mouse, we also see a couple of LEDs (16 million RGB) that light the front 'grill,' top logo, mousewheel, and rear grill. The Gila's LEDs can be mapped in software. A non-controllable LED lights the DPI staging panel, which can be used to eyeball your present DPI profile without need for an on-screen overlay (which also exists).

Let's look at the outer shell a bit, since that's what you'll be most familiar with in real-world use.

Genius has an odd style when it comes to their mouse exteriors. It's clear they're trying to "look the part" of a gaming mouse (complete with scorpions emblazoned everywhere), but that has some comfort and ergonomics side effects. The mouse has sharp, cutting edges that are almost familiar of the rear-end of a Lambo: Jutting, very wide, and styled, but not necessarily functional.

The ridgeline for the upper-left and upper-right buttons is designed very well: It flares up on an arch, providing an easy-to-reach location for buttons that is also easily mapped within your brain. A common issue I've had with multi-button mice is remembering which button does what in the heat of a PvP battle; placing them so geographically distant tends to resolve these issues and makes for more intuitive user control.

We'll talk about my issues with the ergonomics/grip a little further below.

And the final item of note, the Gila is capable of slotting up to 6x4.5g weights to allow more user control over center of gravity and overall feel. 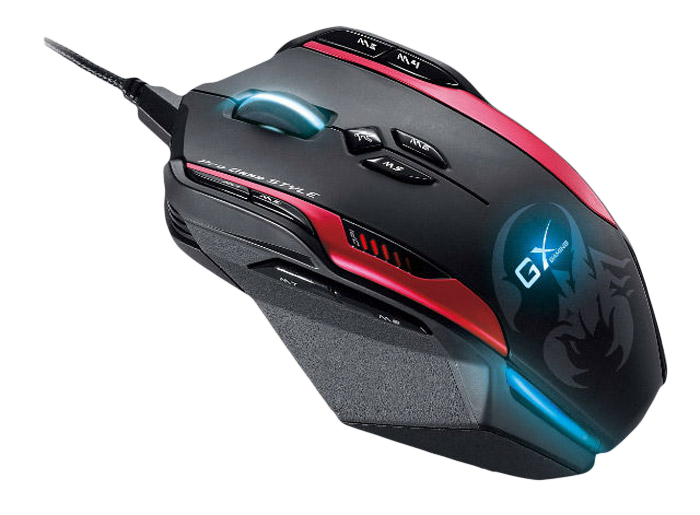 And with that noted, time to talk about the actual functionality of everything. All of the buttons are surprisingly easy to reach, even when embroiled in combat, and the clicking is responsive and cleanly actuated.

As far as real-world use goes, I tested the Gila in the following games for practicality (I classify myself as "skilled" to "competitive" in each of these games, so this is with reasonable APM - averaging around 70-120APM, depending on the game):

I created a custom profile for each game and went about normal tasks. In Rift, our MMO test, I was able to utilize every button on the mouse for differing hotbar abilities or macro settings. Now, just using a mouse won't make you competitive in a game, but I did find that I was able to shave milliseconds off of the time required to switch hotbars and execute situational abilities. Every button was practical and found a home on my hotbar bindings.

The RTS test (SC2) was expectedly less interesting. The thing is, I'm so used to the keyboard and quick on it at this point that it felt more laborious just to learn the mouse and rebind everything. I generally found myself using two-to-four of the mouse buttons for in-game interactions (like the F-key location bindings, which are awkward to reach, or idle military/worker bindings). With a game like SC2, it's most important to opt for a high-precision mouse with granular DPI adjustment settings on the low-end; this gives you greater precision when micro-ing in combat, leaving the keyboard to handle most of your important functions. Steel Series gets a lot of praise in this space.

Skyrim was similar to Rift: It was nice to be able to bind different mouse buttons to various shouts (some mods were utilized to optimize the interface for PC), and I was able to regularly apply those buttons in-game. Very little went unused in Skyrim.

Back to hard specs, let's hit on DPI for a bit. DPI is honestly uninteresting to talk about with the market penetration seen by Avago's sensors, but it's still worth a mention. In general, you'll find yourself sitting at around 2000-2500 DPI on a 1920x1080 display; anything higher than that is just utterly uncontrollable, and that's not news to anybody. To put it into perspective, a 5700DPI sensor can move the cursor corner-to-corner on a three-monitor 1080p array with a single inch of movement. Think about that for a second -- one inch of input to move what is probably nearly 70 inches of physical screen space (obviously pixel count is more relevant, but you get the idea).

This stated, it's still important to have a highly-accurate sensor for precision and better surface material reading.

For our DeathTaker review, I produced the below video content that walks through the software and shows how it works:

Here's where the honeymooning stops. Up until now, the mouse has generally been agreeable in functionality and mostly-utilized (a rarity). The problem, though, really bleeds through in the grip and positioning of fingers upon the mouse. I'll offer the standard disclaimer that everyone's hand is different, so what you're about to read could be entirely the opposite for you: I have wrist problems that make gaming impossible when using the wrong mouse, so I can really feel it when something's not right; to the same tune, I've got fairly average-to-large man-hands - I'd imagine folks with smaller hands wouldn't have quite the same issues I do.

Disclaimers aside, here's the deal:

Those Lamborghini-styled embellishments, while they make the mouse look fast and cool (in theory), makes for an incredibly uncomfortable grip. I felt conflicted as to where to position my ring-finger and pinky fingers: Resting on the extruded ridge wasn't possible without awkwardly angling my wrist, there wasn't room to rest it topside, so I ended up just hanging my fingers off and slightly dragging on the mousing surface. Talk about knuckle-dragger.

It was almost like I was forced to posture my hand in a constant live-long-and-prosper Vulcan sign, kinking my hand uncomfortably between the middle- and ring-fingers. Now, maybe if you had non-defective wrists, this wouldn't be a problem -- but for me, as much as I enjoy the functionality of the buttons, I just can't use that long-term without negative side-effects.

The mouse either needs a more rounded shell or a longer body, one or the other, in order to properly accommodate those with larger hands and ergonomic demands. As an alternative to rounding-out the body, a wider frame (in the fashion of the G600) could also help to position the ring-finger more naturally atop the mouse.

Peripherals are difficult for us to totally disown or promote; just like audio components and keyboards, mice are very much a personal decision for both ergonomics and functionality purposes. We can't just look at objective numbers and declare a victor, so that makes it tough.

Here's the thing: I'm in love with the positioning of the buttons on the Gila mouse -- they're all usable and don't require odd flexing to use -- and, frankly, I'd like to see more mice follow Genius' button locations. They're not cumbersome to the point of being left unused, they're easy to program, and they're within reach. That's all that really matters with regard to buttons, and all three points are accomplished on this mouse.

Where it all falls apart is the ergonomic / grip design. For my wrists and fingers, it's just too painful to use for extended periods of time -- and that's not a problem I suspect is isolated to me. At the end of the day, the features are good, the buttons are well-placed, and everything functions as a whole... it's just that the feel is hard to get used to. For users with RSI or other wrist-related injuries/disabilities, I'd have to recommend that you investigate another mouse (the G600 offers the best wrist/palm support in a mouse I've used). If you don't have issues with wrist strain or  injuries and really want the best in button functionality, then I'd say spring for the Gila in a heartbeat.

Let me know if you have questions that I can help with.