Hot on the heels of Steve's review of Logitech's high-end G700s, we're regrouping to bring you another Logitech mouse review -- this time, it's the Logitech G500s gaming mouse. The mouse uses a chassis that brings back memories of the MX518, G5, and G500 (non-s) mice by Logitech, using a similar chassis/frame layout, a powerful sensor, quality hardware, and a mid-range price-point.

If it ain't broke, don't fix it -- and there's certainly not much broken about the previous iterations (sans some quality issues with plastic M4/M5 buttons). Let's see if that holds true for the G500s.

First up, some hard facts.

The G500s may be very similar in appearance to its cousin G700s wireless mouse (and former G5, MX518, and G500), but there are several key differences between it and the G700s: it isn't wireless, it has fewer buttons, and perhaps most importantly, it doesn't cost $100. The G500s comes with ten programmable buttons, set by default to LMB, RMB, MMB, scroll/tilt right and left, DPI up and down, and mouse 4 and 5. There is an additional button underneath and between the mouse 4 and 5 buttons, programmed to play/pause by default. The only LEDs adorning the shell are in a small strip on the left side, indicative of the current DPI setting. DPI ranges up to a standard--but respectable--8200 DPI, which few people will ever have cause to use (this is discussed in our G700s review). 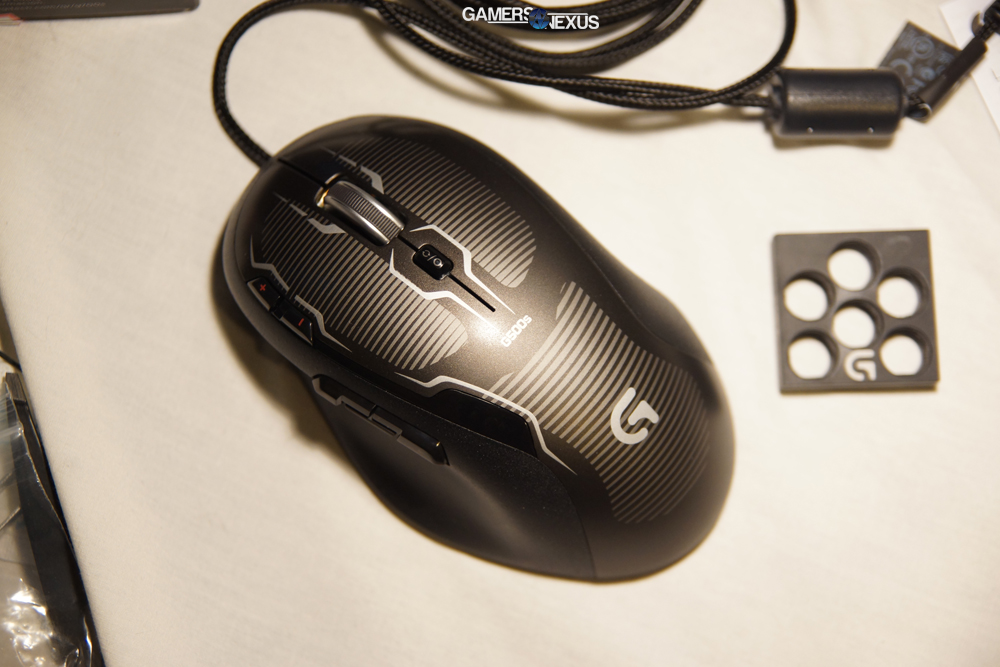 Possibly the G500s' most advertised feature--and one of its most significant differences from the G700s--is the ability to adjust the weight of the mouse up to 27 grams heavier. The weights come in an Altoids-style tin, with 6x4.5 gram and 6x1.7 gram flavors; I chose 4x1.7 grams and 2x4.5 grams to fill the six slots in the cartridge. Logitech believes in the edge that a finely-balanced mouse can give you, and they want you to believe in it, too, as you can see in this rather silly advertisement. 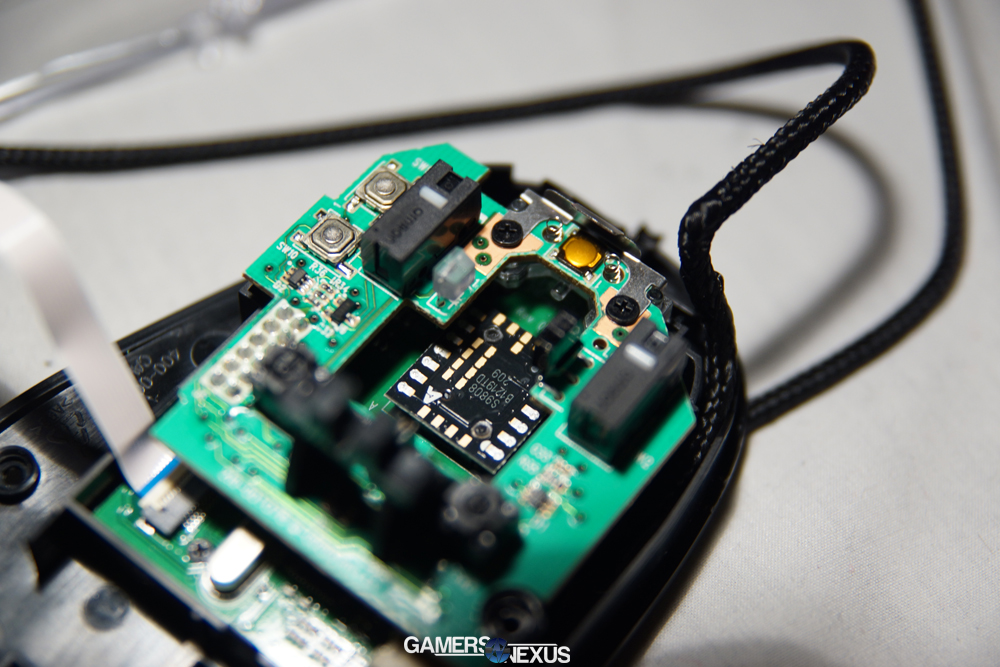 Sensor-wise, Logitech is using the same Avago ADNS-9808 iteration of the 9800 laser sensor, found in most modern high-end mice. In our tear-down of the mouse, we found that it uses the same high-endurance ancillary switches as the G700s, standard Omron-supplied LMB/RMB switches, and the same sensor, of course.

The G500s shares the standard Logitech software which has been covered in our previous G600 and G700s reviews. I would recommend using profiles stored locally on the computer, as that enables more advanced options, and to set your default DPI carefully, as it will reset to the default at the slightest disturbance.

Angle snapping can be toggled in the driver settings for the G500s, which is noteworthy for Photoshop or similar utilities, but is best left to the default (off) for gaming applications. Other than that, the only significant difference is that I've noticed none of the crashing bugs (so far) that Steve experienced with the G700s -- we still hold to our beliefs that it was the wireless/battery functionality of the G700s that caused the issues. 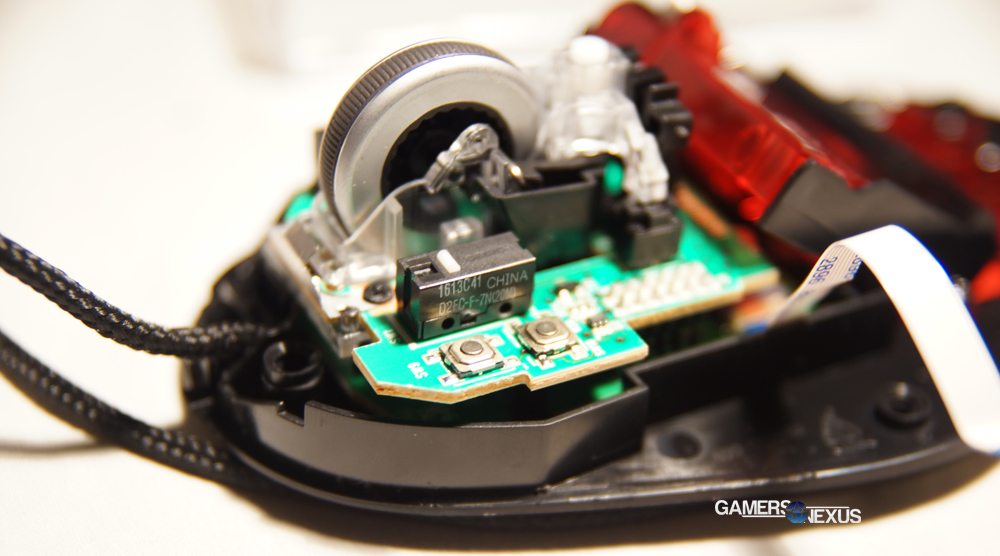 I was very pleased with the mouse's external design. Logitech uses grippy materials in all the correct should-be-grippy places and uses a smooth, hydrophobic plastic everywhere else. I have to admit, I couldn't resist testing the hydrophobia myself -- it isn't exactly spectacular, but no water residue is left behind, and it's more than enough to cope with clammy hands. As for ergonomics, it's certainly a step up from the Genius DeathTaker that I had been using. Although I do miss the shortness, I certainly don't miss the angularity and inconvenient button placement -- the DeathTaker is very easy to whip around due to its small size, though. The G500s, on the other hand, is a relatively long mouse—at least a couple centimeters more than the DeathTaker—and is rather bulbous in comparison; its front and back are rounded in similar fashion to the MX518/G5 (probably the same chassis) and a minimal scoop for the thumb extrudes out. All-in-all, it's quite a different design from the slanted-looking G700s.

The buttons are all within easy reach on Logitech's new mouse, and while it remains simple, it's a bit more functionally-equipped than the previous iterations in this mid-range line. Although I have yet to use a mouse which can put mouse 4 (the default "back" button) in a truly convenient place, the G500s makes up for it with that additional button between mouse 4 and 5. Besides that, there are also the right, left, and center clicks of the scroll wheel (the same magnificent scroll wheel Steve explained in the G700s review) and the DPI adjust buttons, which can be remapped if you're willing to sacrifice that function.

For competitive FPS players, it's common to want a lower DPI to improve precision -- this encourages more mouse-whipping in twitch circumstances, but improves overall stability. Obviously it's a bit of a pain to re-adjust DPI whenever you launch a game, so you can use multiple profiles or DPI levels (incremented by hardware buttons) to effectively have an "RTS" DPI, "FPS" DPI, and desktop DPI. We've been playing around with 1200 DPI for Shootmania, 3200 for desktop use, and 1800 DPI for StarCraft 2. It's pretty easy to switch around between them, so no added work to speak of (though the DPI adjust buttons don't always 'take' the first time). 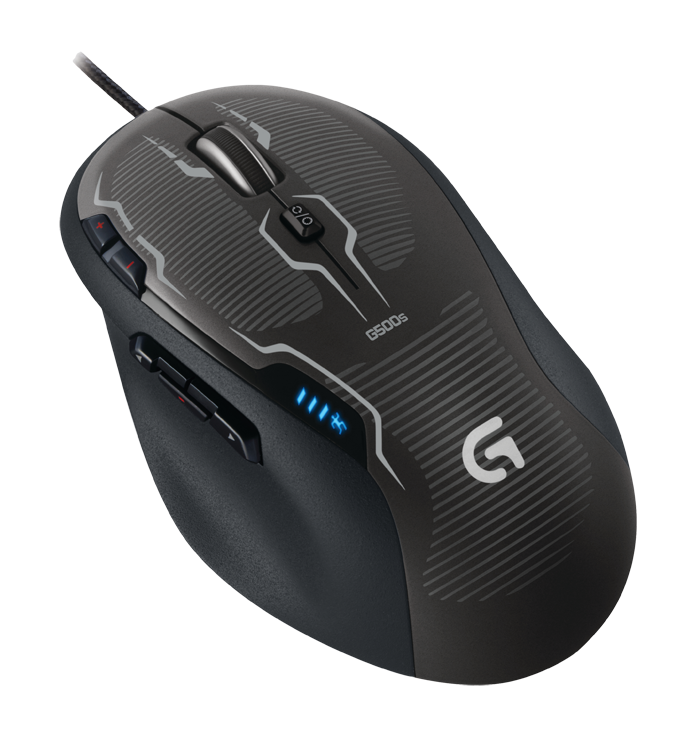 The pads are configured in a rather lopsided triangle with nothing to support the left underside of the mouse. Illogical as that seems, it took me ages to notice, and it doesn't affect the movement of the mouse at all. Other than maybe a drooping pinkie, nothing drags on the mousing surface. I'd take that for granted normally, but with the G700s' cable dragging along the mousepad and all the buttons and hatches on the bottom of the G500s, it comes as a welcomed surprise.

The weight cartridge is extremely easy to eject and reinsert into the bottom of the mouse. I thought the DeathTaker's weights were easy to remove, but now that I can just press a button on the bottom of the G500s, I really don't want to go back to prying a rubber holder out of the DeathTaker with my fingernails. Being able to increase the mouse weight in 1.7 gram increments is a luxury; even though it's difficult to tell the difference, fine-tuning is always a good thing.

The G500s is really only competing with the G600 and the DeathTaker for my affections, which isn't a fair fight at all. The mouse offers just about anything you'd need for most games; the only genre that would really potentially demand more would be MMOs, and that's only if you're getting competitive (at which point you're probably using keybindings and macro keys anyway). The sensor feels precise and is predictable, it's highly customizable in terms of DPI and offers a couple other features (like disabled angle snapping), and the mouse moves smoothly across the surface.

For the average gamer, the G500s is a great mouse. It isn't "specialized" or focus-marketed to MMOs or RTS players, it doesn't have a plethora of buttons, and it's simple in design -- any of these could be negatives, but for most gaming applications, they're assets. With an MSRP of $70 and availability at less than that, it's well worth the money. It's the upper limit of how we classify a 'mid-range mouse,' but that money goes toward a quality product that should retain its life for at least a few years. The buttons themselves are rated for 20 million presses, the teflon feet are rated for 250km of movement, and the cable is braided (to offer resistance against dust and abrasion decay), so it should last a good while.

Definitely recommended. If you're an MX518 or G5 user and you want to keep the same body, but need a new mouse (due to decay or obsolescence), the G500s seems like an easy choice at ~$50-$70 online.