SilverStone explained to us that noise reduction, cooling performance, and dust prevention held priority over some other features -- like rubber grommets, for instance.

In this SilverStone Raven RV02B-W review, we'll look at how to cable manage the case, its benchmark performance, and its unique motherboard rotation. The case has been out for a little while now -- with the USB3.0 upgrade being somewhat recent -- but we wanted to prepare for the RV04 release by placing its predecessor on the bench. It's an important case to test on the bench.

Let's see how it did. First, some specs:

Looking strictly at the specs, the most immediately engaging item is the case's unique motherboard mount rotation: As with the original Raven, the RV02 is a bit elongated and shorter, but that's to accommodate a 90-degree rotated board. Rotating the board in this fashion has several advantages, namely in cooling channels and load distribution. A multi-GPU array, for instance, will put less strain on the motherboard and reduce risk of dislocated PCI-e slots (which we've seen too much of in 3-way SLI builds) due to the vertical positioning of the expansion slots. On the cooling front, bottom-oriented fans are able to force air upward and through the CPU/GPU fans without hindrance from drive bays or changes in direction, thus taking advantage of stack effect cooling.

The case uses positive pressure cooling, employing 3x180mm bottom-mounted intake fans (700/1200RPM) and 1x120mm top exhaust fan; the CPU cooler is positioned between two of the intake fans, the VGA finds itself right above the 2nd fan, and the drive bays are above the third fan. There's no side, front, or rear cooling on this case, though the PSU fan is flanked by a filter on the rear side. 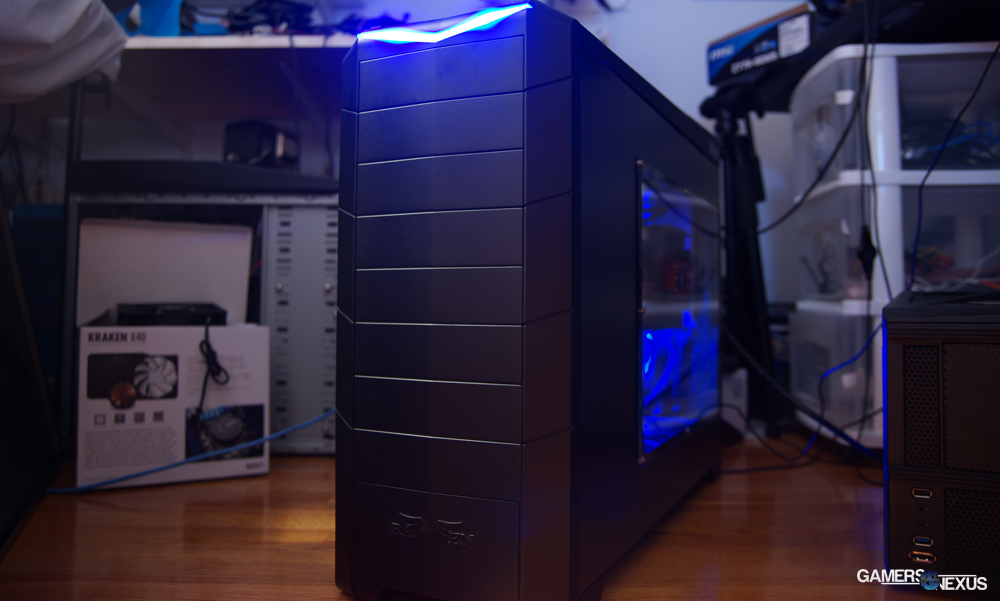 The stack effect is a well-known physics phenomenon that often finds itself exploited for efficient building and chimney/stack cooling; in its simplest form, the stack effect dictates air movement based upon thermal differentials (and thus, air density) between the interior and exterior of an enclosed space. Hotter, lower-density air rises due to air buoyancy, causing a pressure difference that can be exploited for more efficient cooling.

Because the case uses a bottom-to-top air channel and has a large mesh on the top, we don't need many top exhaust fans (other than for the CPU region) due to the effects of positive-pressure air cooling. The air is propelled from bottom-to-top in a streamlined fashion, with the GPU and CPU fans acting as accelerators along the way.

All of this means that the case excels at expelling dust, because air will escape wherever possible, with the exception of the bottom intake position (where filters are present). Dust atop the case should theoretically be almost non-existent given the strong upward air current, and bottom filters are easily cleaned every 1-3 months. For similar reasons, because the case has fully-enclosed front and side panels, noise will primarily escape from the bottom (farthest from your ears) and top-rear, also far from the ears. The lack of side / front intake meshes should reduce overall noise that the user is exposed to.

As a result of the case's component repositioning, the PSU ends up mounted top-right, with the power connection facing upward. Along with I/O cables, the power cable is routed along the inner-lining of the top panel mesh and runs out the back. The power supply fan faces the rear of the case, where a removable/cleansable mesh can be found.

The drive bays are completely removed from vital air channels, so several HDDs and cages won't hinder air in the same manner as with most front-intake cases. As for special features, the first HDD/SSD bay has a rear-side SATA power and data connection built into the case. If you're only running one drive, you won't even need to use an SSD power connector (just MOLEX for the built-in one).

Speaking to aesthetics, the case has an appearance fitting for its name: The top panel is beveled-out and is chiseled with SilverStone's Raven chevron logo; a large, flared-up mesh is present on the removable top panel, responsible for covering up the rear IO ports (remember - the board is rotated, so they're in the top instead). Front I/O is about as simple as it gets: 2xUSB3.0 ports, 2x3.5mm, power, and reset. That's it.

In a further stroke of non-standard practices, the right side panel of the case is fitted with a large, clear glass paneling. This is in contrast to most cases, which obviously are fitted with the left side as the "showroom" side of the case. 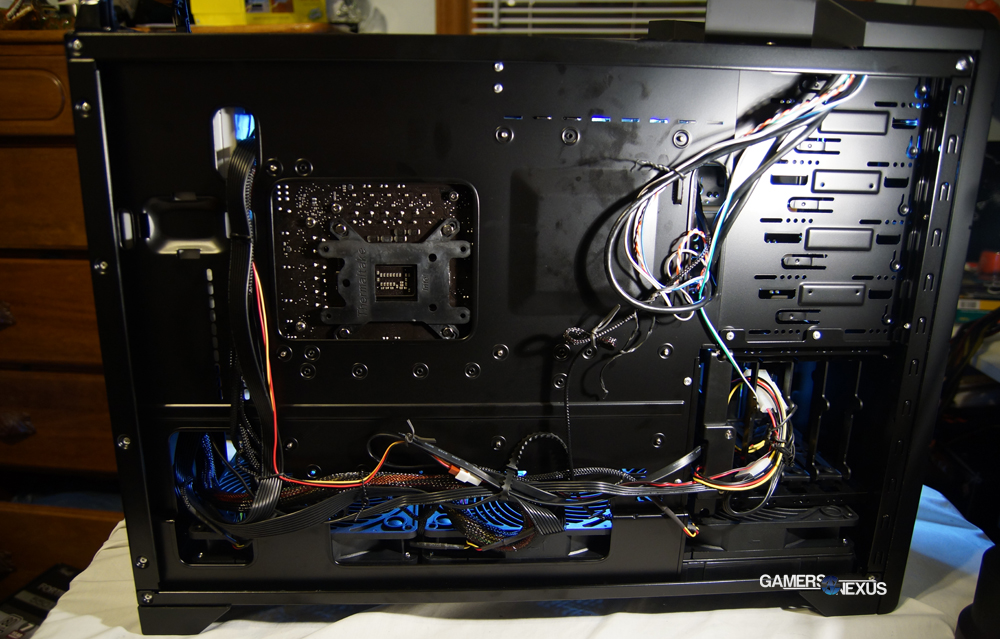 There's no denying that the RV02 puts most of its emphasis on cooling performance, as you'll find in our benchmarks below. Some of the ease-of-installation features are lost as a result of this, but everything still fits together nicely. We're faced with just a few strategically-placed tie anchors (not nearly as many as found in other cases) for cable management, a couple of pass-throughs, and that's about it -- nothing particularly special, but not necessarily detrimental, either.

SilverStone's Raven lacks some of the amenities found in cases that are more focused on appearances -- like rubber grommets, more tie anchors, an appropriately annoying amount of LEDs, and split-layer board mounts -- but is otherwise very acceptable.

This was easily one of the most challenging enclosures I've worked with from a pure cable management and cleanliness perspective, but I was very pleased with the end result. You'll have to be creative with all the extra Molex and fan connectors in the case -- for instance, I shoved one of the fan cables between two of the bottom intake fans (concealing it successfully and reducing overall rear-side bulge). I also hid several of the extra cable length within the farthest drive bay, ensuring nearly no impact to cooling, but a much cleaner look. You'll want to route the PSU connections through the cut-outs, tie them down against the mounting plate, and then stick to a clean "highway of cables" toward the drive bays. Sticking to the metaphor, you'll take several "exits" along the way, where motherboard power, fan power, and PCI-e power will branch-off and re-enter the bottom-side pass-through.

Try to keep as much length of the cable on the rear-side as possible. Because of the lack of tie anchors, I improvised and used small zip ties / twist ties through the unused standoff mounts, effectively creating a makeshift anchor. Without doing this, the bulk of the bundled cables will be too significant to close the case.

Improperly managed cables will be more immediately noticeable on this enclosure than on others we've tested, given its rotated board and bottom-intake design. Take the time to manage things cleanly -- it's definitely worthwhile.

You may run into issues with cable length for SATA power connectors, so if you're using a PSU that has particularly short cables, it's possible you'll need an extension or longer cabling. Everything else reaches its destination easily.

The overall build quality is fairly impressive. The case is a somewhat standard steel / plastic composition, but the panels are strong and durable. The matte paint gives a great look that's mostly resilient to finger prints, which is also beneficial.

Dismantling the case is pretty straight-forward: Remove the top panel first, which is done very easily, then unscrew the two side panels -- that's about it. Getting it back together isn't difficult, though the top panel can sometimes require a bit of force and finagling to properly position (this is even seen in Newegg's official photos, where the top panel isn't fully mounted). Just watch out for pinched fingers.

SilverStone uses their high-quality Air Penetrator fans (also found on the SG08) for cooling, which we've generally been very pleased with for their low noise profile and high cooling efficiency.

I was particularly excited to find that the first drive bay, as mentioned above, ships equipped with a SATA data/power connection, helping to reduce the cabling requirements a bit. After our incident with Rosewill's Armor Evo snapping the drive-side SATA connector (due to poorly calculated panel distance from the drives), SilverStone's approach felt significantly more secure than the normal cables. Definitely something worth taking advantage of.

Overall assembly was fairly standard. It was kind of funny to find myself constantly disoriented: I'm so used to the standard mounting orientation that I almost got "lost" during cabling, which really just goes to show how habitual we are as builders. This isn't a slam on SilverStone, just sort of a funny situation. The build process was easy overall, with cable management taking a good deal more time than normally.

Continue to Page 2 for the benchmark results, temperatures, performance, and conclusion.