First off, the H630's trailing number is indicative of its underlying chassis/frame -- it uses the same chassis as the Phantom 630, previously reviewed here. For this reason, this review will be less in-depth than previous case reviews, seeing as the chassis was covered in great detail when we looked at the P630.

It has the same (or similar) cut-outs, grommets, angularity, split-level board layout, modular drive bays, fan placement and orientation, rear SSD bays, board tray, and everything else internally. It's not particularly exciting as reviewers, but it's an efficient and common strategy to reuse successful chassis designs (like the P630's) in a new line of products.

Because the H-designated NZXT products are meant for quiet cooling performance, it's far from a "630 rebrand." The H630 loses the mesh side panels, the side fan, the top mesh, the aging Phantom aesthetic, and replaces them with very thick paneling (steel) that's padded with foam.

There are a few approaches to controlling acoustic emissions, with various companies taking various philosophical and scientific approaches to achieve the same goals. Fractal, for instance, subscribes to sound blocking, where they try to contain the noise within the case by combining various other techniques; SilverStone employs sound deflection and redirection in its cases, opting instead to channel meshes and acoustic escape points away from the end-user (pointed backwards); NZXT favors sound absorption, specifically resonant absorption, which places foam material between the acoustics and the noise source. 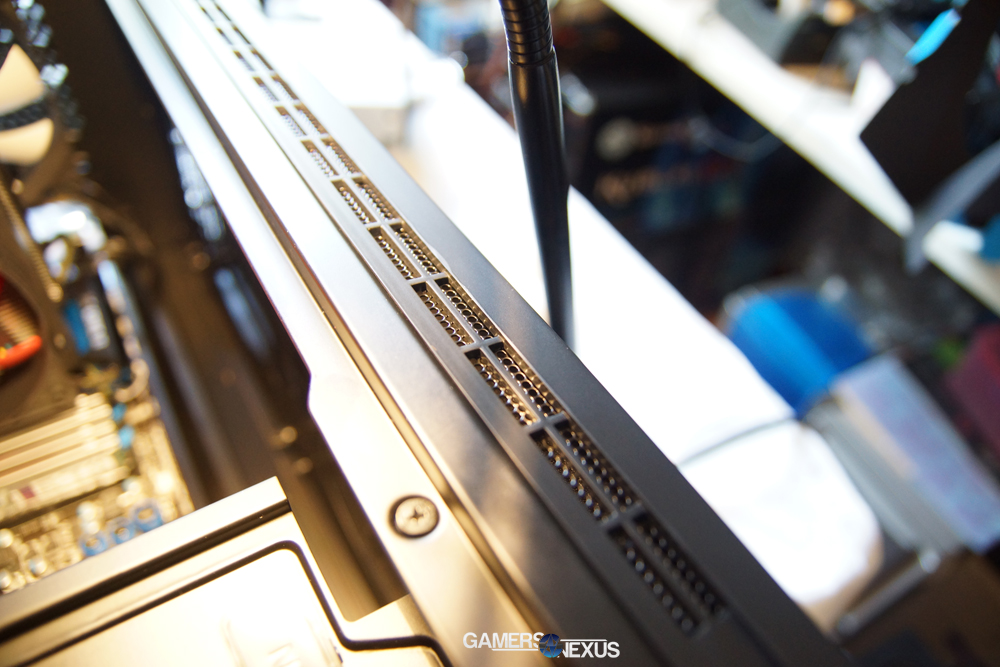 The only grills on the case - intake and exhaust on the front/top.

There are two primary types of sound absorption foams used in the computing world: Resonant and Porous. Resonant damping foam excels at diminishing acoustic emissions in the low-to-mid and sub-bass frequency ranges (this is what Fractal couples with their sound blocking techniques). Resonant damping materials can also help to reduce the "whirring" oscillation noise that's emitted from some poorly-designed fans or speed-inconsistent liquid coolers. All of this is done by combining wave reflection with wave damping, a process wherein the sound wave loses increasingly more of its "power" with each bounce (or reflection). Some of this power is also lost in heat, generated when the wave connects with the material and part of the sound energy is converted into heat energy, via friction.

Then there's Porous sound-damping foam, as seen in NZXT's H630 today. Porous sound absorption foam is theoretically more capable of dealing with mid-to-high frequency noises, like the higher-pitched whine produced by high-RPM sleeve and ball bearing fans. As the name suggests, porous absorbers are riddled with tiny holes—pores—that help generate friction between the sound energy (the colliding wave) and the porous foam's cell structure, again converting some portion of the sound energy into heat energy.

Is there a best material? We're really not qualified to answer that, and I'm sure some degree of the answer depends on the material application and overall design of the enclosure, along with internals. Preliminary research seems to indicate that, all other factors equivalent, porous absorbers will be significantly more effective for medium-high frequencies, but aren't quite as capable with mid-low frequencies as resonant absorbers. NZXT insists that, for this reason, porous materials are preferable for their ability to better handle the higher-pitched frequencies we find irritating in system cooling.

As far as PC cases, it's something I'd love to objectively test with decibel meters in a proper silent room, but that's not something we currently have access to -- though it is something we're working toward.

Back to Specs: The H630's Features 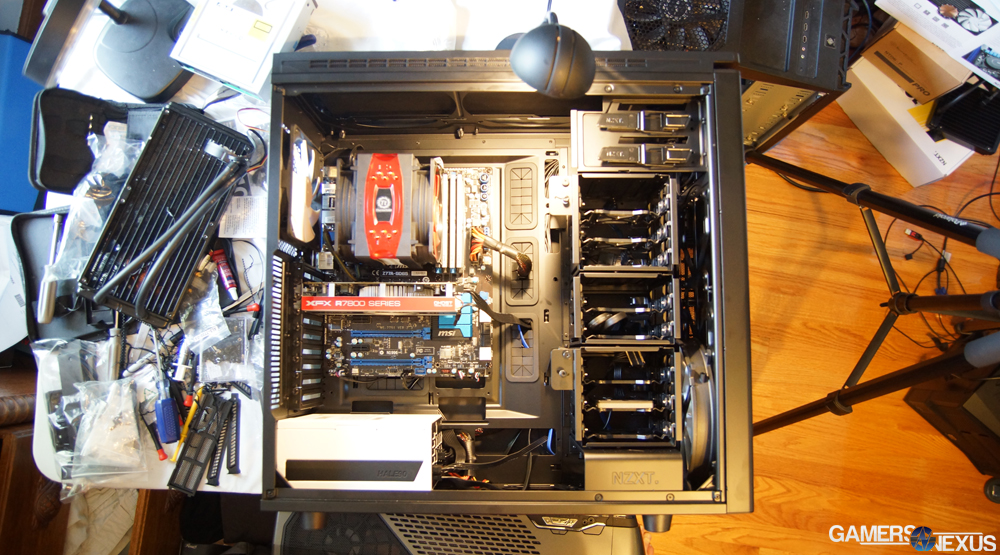 With the case soundproofing topics summarized, let's move back to objective specs and some of the features.

As for cooling options, the H630 can fit large radiators (240mm, 280mm, and 360mm) in the top and front positions. The drive cages are completely modular, so if front-radiator mounting is desired, they can be removed in favor of larger rads; the two rear SSD bays (behind the motherboard) can then be used for storage needs. Theoretically, you could also convert the 5.25" bays to hold normal 3.5" drives, if you wanted.

As with the P630, the H630 has an unbelievable amount of cable management space and routing options. The split-level motherboard means that cabling for the CPU/EPS power can be routed in a way that almost entirely conceals the housing; cut-outs are scattered through the entire interior, so every motherboard form factor should have nearby pass-throughs that can be utilized. The rear-side of the enclosure has something like 27mm of cable management space, making it very easy to conceal multiple fat cables behind the board -- including stacked 24-pin and PCI-e connectors.

Each of the panels is covered in a thick piece of porous damping foam -- that includes the top, sides, and front panels. The thick steel also helps contain noise, and is evidenced by the sheer weight of each panel.

Other than that, things are largely the same as the P630 internally. It's big (it makes ATX boards look like Micro-ATX), imposing, and easy to work with. As SilverStone says, though, it's not all about ease-of-installation. 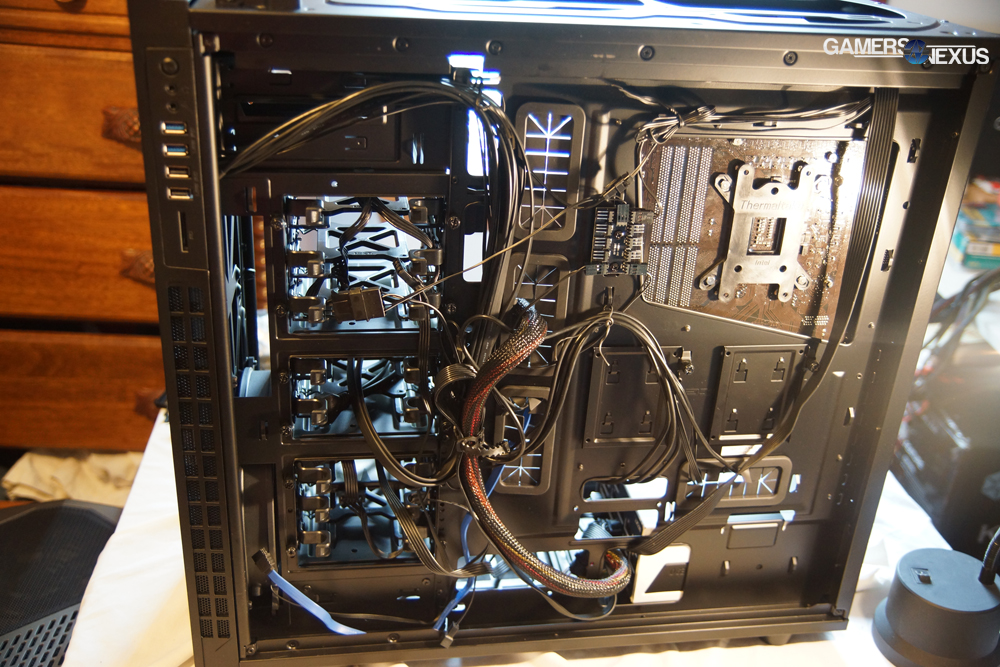 Simply put, build quality is solid. The paneling is sturdy, durable, and composed of quality components with a sleek exterior; if you're looking for a "gaming" case that has that "gamer" look, then you should probably look elsewhere. My feeling is that the H630 is designed for professional computing and performance environments, where noise and discretion reign over flashiness and LEDs.

The chassis itself is sturdy as ever, as with the P630, and fits all manner of radiators and cooling add-ons (with caveats - below). The only place where build quality was suspect was with the front panel, which was excruciatingly difficult to remove (and NZXT admits to this flaw, but states that it's an issue only existent in pre-production/press models). When I say difficult to remove, I really mean it: A concerning amount of force (causing bowing/flexing of the paneling) was required to remove the panel, but I'm going to trust NZXT's statement that they've addressed this issue in the production cases.

Other than that, I'm still going to complain about the drive mounts. I've complained about NZXT's shoddy, bendy, plastic-y drive sleds since back when we reviewed the Phantom 820, and they're still using the same ones. Should that alone affect your purchasing decision? Absolutely not. I'll admit that this is a petty complaint, but I'll keep writing about it until it's addressed.

Cable routing in the H630 is pretty straight-forward. You've got cut-outs everywhere, so most of them will go unused. Assuming a standard ATX board, you'll end up routing your IO wiring through the highest cut-out in the row of cut-outs that parallels the board. 24-pin and PCI-e route in a standard fashion. SATA power can be routed either through a cut-out or below the drives, where a small fan cover is present, then pulled through on the far-side of the drive cages.

Fans can (and should) all be routed to the rear-side of the board mount, where a fan hub is present for easy consolidation of cables. 4-pin PWM fans should be plugged into the board.

One flaw I found with this fan hub: NZXT's new FZ-200 fans (their new 200mm replacement that sells as an aftermarket unit) has a thick cable header that prevents the pins from aligning properly with the hub pin-out. The fan connector is elevated too high for the hub, so if you're using the new fans, you might be stuck with using the motherboard or making small modifications to the hub -- like cutting out some of the plastic.

Continue to page 2 for the benchmark performance & conclusion.