Closed-loop liquid coolers first hit the market a few years ago, instantly becoming "the thing" to have; it was an easy solution for users who wanted to lay claim to liquid cooling, but didn't necessarily have funding / ability for an open loop system.

As these coolers emerged, it rapidly became evident that simply being a liquid cooler didn't make it inherently better than air. A solid, entry-level air cooler (like the AR01 or Hyper 212) will often out-endure and perform equally to a low-end liquid cooling solution. Just as with other aspects of hardware (a cheap Z87 board vs. an expensive H87 board, for instance), just because it's theoretically more advanced in one aspect, that doesn't mean the performance will outmatch a less technologically advanced product that employs higher-quality engineering. A tuned sleeper can blow past a high-end stock car, if we were to make analogous comparisons.

Antec's Kühler 1250 liquid cooler got me excited about CLCs again. Most of the CLCs on the market are all designed, built, and packaged by Asetek, who slap a Corsair or NZXT (and up until recently, Antec) sticker on it before shipping. Frankly, that's boring. The performance deltas are going to be limited to the fan and software, maybe some tweaking to radiator size, though that's rare. At that point, you're reviewing how fans interact with the same radiator, which is -- again -- boring. I did this for four coolers over here, where I explained the supply-side of the cooler industry. Antec's new 1250 was engineered entirely in-house and has 100% custom tooling, so it's a new product with a new approach to CLC design. Before jumping into the text, I'll leave you with my video explanation and product tear-down:

In traditional CLC design (Asetek-supplied models included), the cooler is comprised of a few core parts (from the bottom-up):

Other than its computing application, this hasn't changed since the invention of liquid cooling. It's a very simple system. What Antec has done, though, is built it up like this:

The approach and design philosophy, at a top-level, is obviously the same. A radiator is a radiator. That's not news to anyone. The same for a pump. What's unique here is that Antec has applied a dual-pump design (this is found in open loop technology); two pumps working in unison will help spread load and enables faster transport of the liquid through the radiator. The end result, in theory, is cooler liquid throughout the entire system (it moves faster and is cooled faster), which results in better dissipation / whisking potential through the copper coldplate. 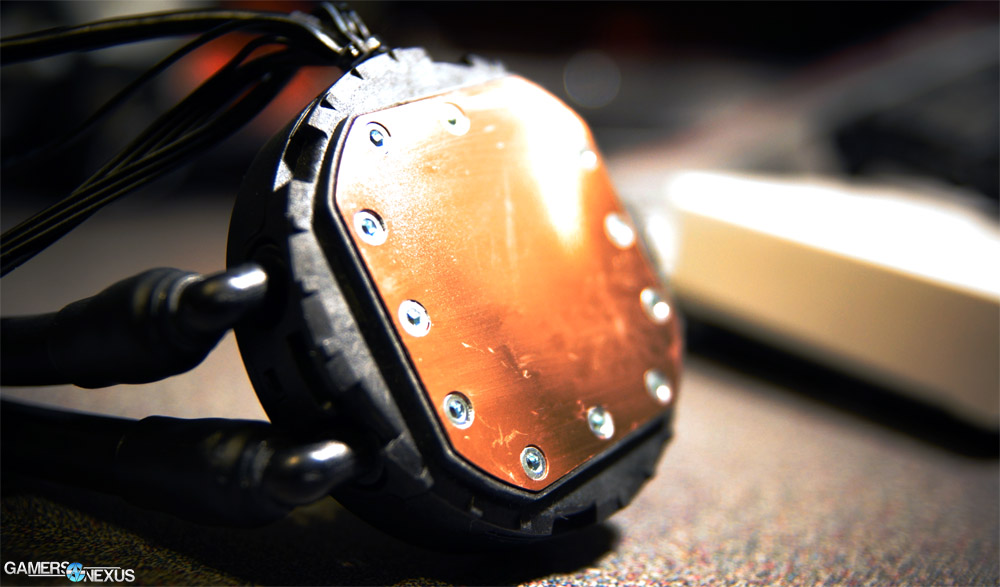 The bottom of the coldplate (before disassembly).

As with any cooler—air or otherwise—the copper plate is where the magic happens. Copper has a thermal conductivity of nearly 400W/mK, which blows aluminum (~200W/mK) out of the water. The interior of the CPU block is designed in a way that liquid whisks heat away from the copper plate by passing the liquid through tiny channels in the copper block. This design facilitates faster cooling of the copper plate and is used in all CLCs.

The inside of the coldplate (after disassembly); uses small copper channels to dissipate heat.

Mounting two large pumps atop the radiator does introduce several design complications and installation concerns, though. We'll get to those after a basic specs table.

In this Antec Kühler 1250 benchmark & review, we'll look at the new liquid cooler's performance, installation, specs, and tear-down to see how it works.

I've given the 1250 some pretty high-praise so far -- and you'll see why in the benchmarks -- but not everything was perfect. To cut to the chase, I absolutely hated the installation process. Quite simply, the mounting bracket was frustrating and cumbersome; in talking with Antec, they seemed pretty sure of their mechanism, so perhaps I just need Gloves of Dexterity to install this cooler. Either way, I tried two different 1250s and grew frustrated and impatient while installing each. 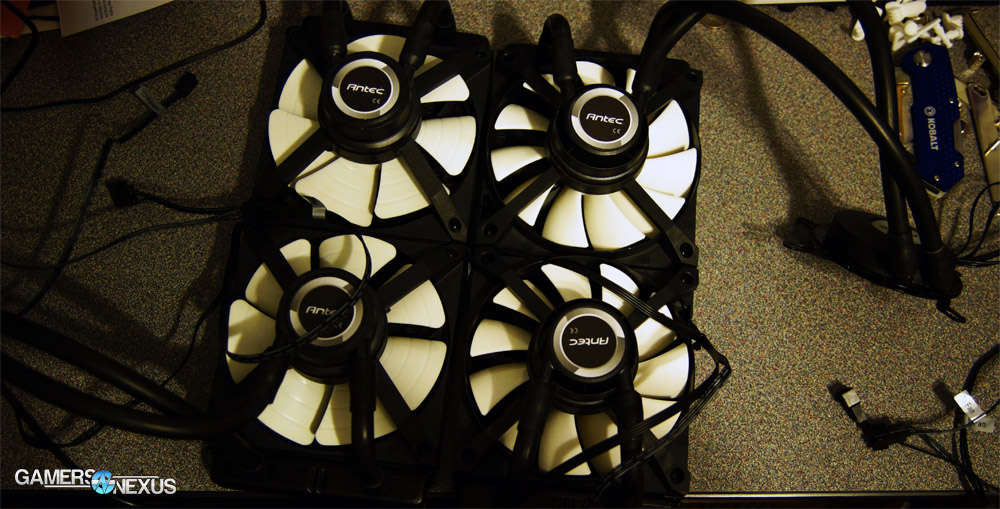 The thing is, the cooler bracket gives the appearance that it's not going to fit on some boards -- our test equipment is included in that. The chokes and caps flanking the socket on MSI G45 and GD65 boards will brush right up against the bottom of the mounting mechanism, so I found myself a bit concerned about placing unnecessary force on those components if the bracket were improperly designed. At the end of the day, everything worked out - it all fit together - but it took a few tries to be happy with it. It wasn't easy to orient the logo upward, either, and this is largely due to the same issue in combination with the extra tubing.

As for the mechanism itself, there are four sliders (each corner) on the circular plate that encases the CPU block. The sliders must be set to either AMD or Intel, but aren't as secure as I'd like them to be in their locking. These sliders move extraordinarily easily during installation, so you'll probably have to set them to the correct socket type a few times throughout the process. Honestly, I'd rather see Antec use a separate AMD and Intel bracket, rather than trying to cram them into the same unit. Or just develop a proper lock for the sliders. The backplate and its non-locking metal inserts didn't help matters, either.

During installation, you also need to be careful how the tubing and cabling are oriented -- the tubes will brush against nearby components if not properly positioned.

Having tested about two dozen coolers over the last year, I'm fairly certain that I'm not exceptionally incompetent when it comes to installing them. Most take me a few minutes, but the 1250 desperately needs a new mounting bracket. It may work at the end of the day, but that doesn't mean it can't be improved. And it should be. If I were an end user, I would have returned the product without ever installing it -- it was just cutting it too close to critical board components to feel comfortable.

All the complaining aside, the overall build quality is solid; the radiator is, well, a radiator, the pumps are stable and silent (they lack the annoying whirr that other pumps exhibit), and the fans don't cause any rattling or vibration within the case. The copper coldplate is from a common supply and uses standard design, but is high-quality nonetheless.

Antec has opted to use the rubberized tubes, which all nearly all manufacturers have switched over to; several years ago at a tradeshow, Corsair privately knocked the rubber tubing solution, stating that their plastic / bendy tubes were far superior to "nearby competitors." Since telling us this at the show, Corsair has also switched to rubber tubing and has retained its warranty policy, so I suppose the flexibility of rubber outweighed whatever theoretical advantages can be yielded by plastic tubing.

The 1250's included software ("Antec Grid") offers presets in 'silent' and 'extreme' modes, as with the  i-series Asetek software, and also has a custom setting for your own RPMs. For some reason, Antec doesn't natively configure a "medium" option, but you should immediately do this if purchasing the cooler.

As with the H100i and NZXT X60, the "Extreme" setting -- at ~3000 RPM -- is so loud that it's entirely unreasonable to expect any normal user would ever deploy such an option. It's just not meant for gaming and every day use, and is more targeted for power users, overclockers, and people who can walk away from their systems. The silent option (~650 RPM) leaves a lot to be wanted thermally, but is actually impressively quiet (quieter than most the other system components, anyway). Then there's the custom option, which I configured to a medium 1500 RPM, and that seemed to work as a perfect compromise.

Continue to Page 2 for the Antec Kuhler 1250 benchmark / temperature performance.