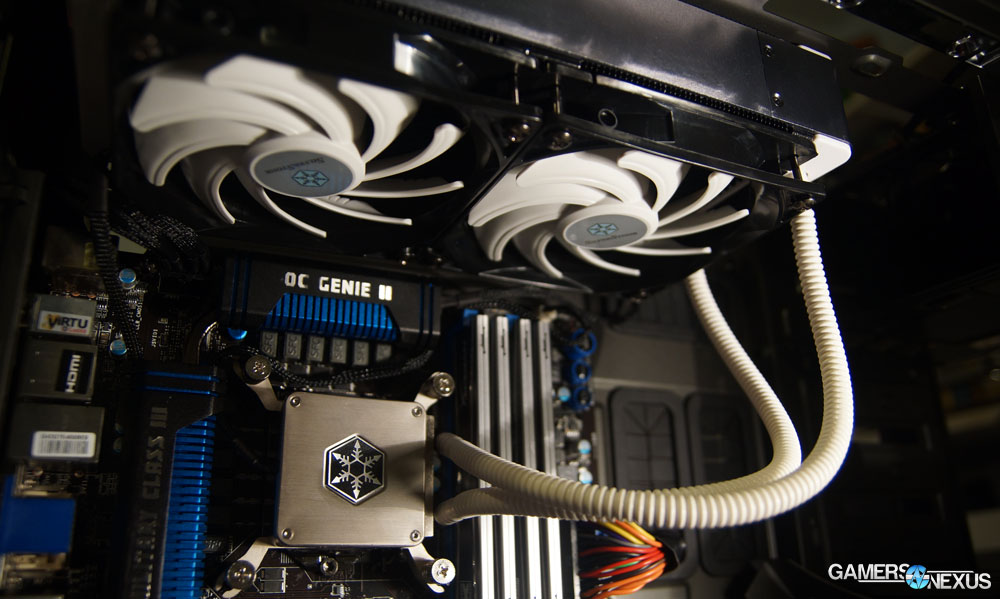 With thanks to Antec, Cooler Master, and SilverStone, my boredom of closed-loop liquid coolers (CLCs) has subsided as more innovative designs have emerged. As we've discussed heavily before, a significant portion of the cooler industry goes through a single suppler: Asetek, who have a notoriously-long legal arm. Asetek's designs can be found most heavily used in NZXT and Corsair CLCs, and frankly, they're boring; they're rebadges with software options, in essence.

Antec's Kuhler H2O 1250 CLC blew away all other CLCs when we last tested a cooler, and now we're back to see if SilverStone can perform the same feat with their 240mm Tundra TD02 cooler. In this SilverStone Tundra TD02 benchmark and review, we'll look at the liquid cooler's installation, build quality, and thermal performance. This review will be a bit shorter than our previous CLC round-up and Antec 1250 review, as we've already covered many of the core cooling principles and can now focus purely on the unit.

The Tundra TD02 is built like all other all-in-one (AIO) liquid coolers on the market: You've got a radiator, some tubes, and a pump attached to a CPU block, under which lives the coldplate. With Antec's dual-pump design on the 1250, the pumps are located on the same axis as the fans, but all other prominent CLCs on the market utilize a single-pump design. The TD02's pump is located atop the CPU block -- a fat, aluminum unibody (nickel-plated) -- and operates at a fixed speed, powered via the motherboard.

Where most CLCs deviate from one another is the radiator size. SilverStone has opted for a 240mm form factor (2x120mm fans), which means the actual radiator length is ~278mm (to account for the hoses and edges). Most noteworthy is the TD02's thickness, most prevalent when compared against our NZXT Kraken X60 (which uses an industry-standard radiator); the TD02 is nearly twice the thickness of what we find elsewhere, which theoretically provides greater thermal dissipation potential and thus greater cooling. This is done primarily by running the liquid piping within the aluminum fins, responsible for heat dissipation, rather than strictly between the fins.

In a standard radiator design, the liquid piping channels liquid across the radiator to dissipate heat, before eventually being returned down the hose and to the pump. These liquid pipes are normally exposed, with aluminum fins zig-zagging between two pipes. With the TD02, the pipes are surrounded by aluminum fins (top and bottom added), so our conduction potential is greater. As the fins conduct heat away from the pipes (and thus, the liquid), the fans blow cool air through the fins to dissipate heat.

The radiator is also entirely screw-less (held together by an outer aluminum shell), so the overall "feel" exudes higher quality and durability over extended lifetimes.

SilverStone's CPU block is also notably fatter than most of what we're used to. By replacing plastic with all metals, the block is fattened in favor of quality, appearances, and insulation potential. Like the radiator, the coldplate lacks any visible screws on the underside, meaning we've (again) theoretically got greater thermal dissipation potential. The actual practical difference is likely largely unnoticeable by most desktop users, though. 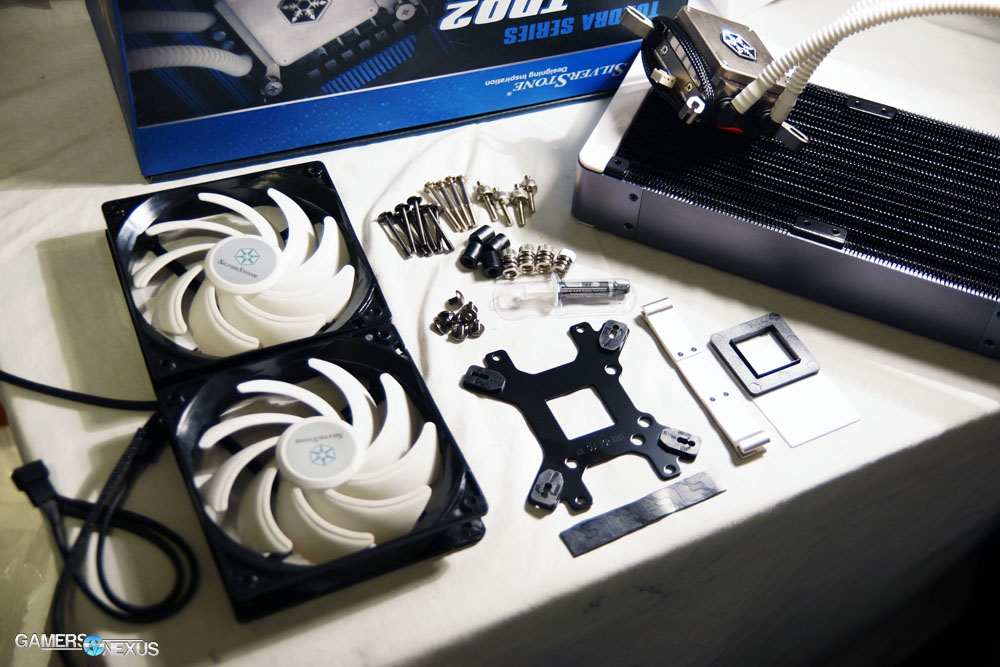 This is where I normally rant about how much I hate a particular bracket or want higher-durability metals to be used, but in the case of the TD02, I was actually very happy. The installation process took a few minutes -- no fighting with the 1250's awful bracket design or Asetek's awkward screws -- and felt firmly-secured when completed.

Done. Easy. No special mechanism on the CPU block, no sliding toggles for AMD or Intel, it just drops on the screws and installs. If other companies would take note, that'd be greatly appreciated.

You might run into issues with the imposing size of the radiator, though. Because it is a non-standard size, certain cases will be unable to fit the radiator in their purpose-built slots -- NZXT has 240mm radiator holsters in some of its cases, but those were built for the more ubiquitous Asetek-sourced radiators. I also couldn't fit the radiator 'under the hood' (top panel) of our Phantom 820 test bench, and instead had to hang it inward. Because I wanted to use the fans in a push configuration (from inside the case) to ensure I didn't suffocate the radiator, that meant I mounted the fans first and the entire unit second, using additional screws provided by SilverStone.

It's big, but if you've got a lot of room in the top of your case between the board and the frame, you should be in good shape.

If the specs section didn't make it clear, SilverStone's overall product engineering is focused most heavily on eliminating the use of cheap plastics and mitigating weak points (like the mounting bracket).

Quality is solid to the touch and seems resilient and cold, though there was some criticism among user reviews that we will address toward the end of the article.

Continue to page 2 for the benchmark.