Everyone's making mechanical keyboards lately. Leading keyboard brands like WASD Keyboards, Das Keyboard, and Ducky (also a supplier) have been at it for a while, but some of the incumbents from other corners of the industry want a piece of the peripherals market. If you've been following case and cooling manufacturers for the last few years, it's pretty likely you've noticed that they all latch onto industry trends: Cooler Master, Rosewill, Antec, and others all have some sort of "mobile" line of (let's be honest) supplied trash that they've slapped their stickers onto. Most of these manufacturers, including rising giant Corsair, have also been working to produce gaming peripherals for the last few years. Unlike the mobile offerings, these peripherals have some actual merit and value to them. Thankfully.

A great example of actual innovation is Corsair's RGB keyboard (we produced a video showing this at CES). The company bought exclusive access to Cherry's RGB MX switches and then built in scripting support for mapping keyboard functions (LUA scripting), which is pretty noteworthy in its own right. This keyboard uses a similar Panasonic controller to what is found in electronic advertising billboards that require intensive LED pattern control. Similarly, Cooler Master had its targets set on MX Green switches a year ago (though very little came of this) and had an interesting "Trigger" family keyboard to use them.

My point is that there are good peripherals coming out of these case/cooling manufacturers, even when dedicated keyboard companies (like Ducky, sourced by NZXT) supply a lot of parts. The affordability and marketing reach of rebranded or re-designed products is inarguable -- just look at what Kingston's doing with QPAD.

And so we're brought to this article. In this review of Rosewill's Apollo RK-9100x mechanical keyboard (with MX brown switches), we'll look at the overall build quality, software, performance, and hit some of my impressions. I'll be matching this keyboard up comparatively vs. other keyboards in the same price range, like Logitech's G710+ and Corsair's Vengeance K70; the Apollo RK-9100xBBR (tested) retails for an intimidating $150.

At the heart of the RK-9100x keyboard rests Cherry MX mechanical switches, as supplied by German switch maker Cherry. It's fair to state that Cherry presently dominates the majority of the mechanical keyboard switch market and sees use in most mechanical keyboards, even those dating back to the IBM era. Cherry manufactures all of its switches in , where factories have limited production capabilities and thus the company must make decisions between which switches they actively produce; this is why the MX Green line sort of quietly vanished and other switches fade in popularity.

The Apollo RK-9100x keyboard is available in MX brown and MX blue. I've been using MX Brown for purposes of this review. 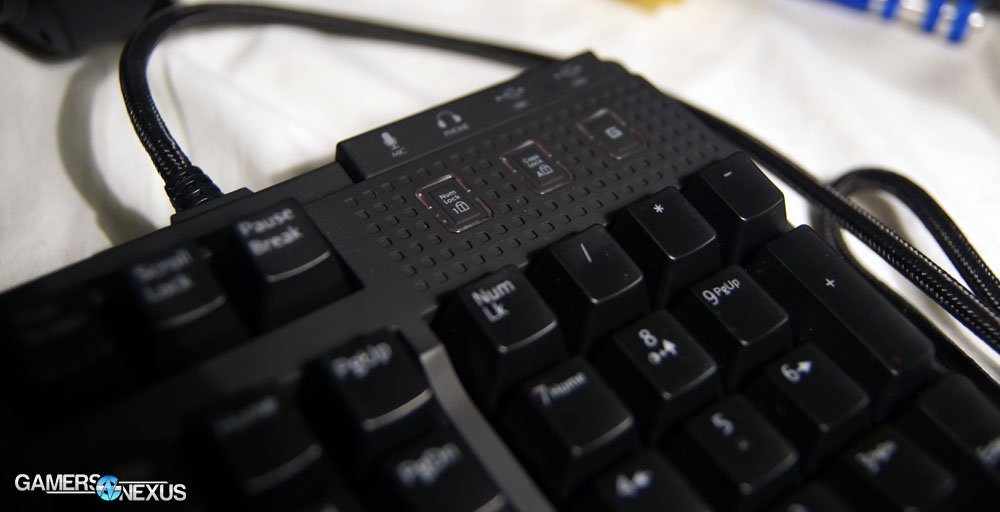 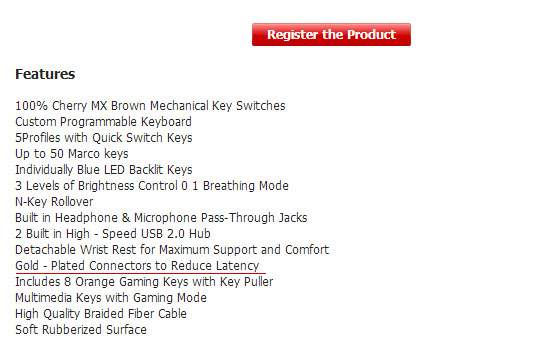 Before we get started on my thoughts using the keyboard, we need to set something straight about peripheral advertising. This isn't something for which I'm explicitly calling out Rosewill -- though they do very directly make the claim on their marketing material -- but rather something that the entire industry needs to move away from. I'm talking about the claims that gold-plated USB connectors somehow "decrease latency" or "improve signal quality" between the device and host system.

I'm sure most of our readers already understand this, so I might be preaching to the choir -- but here's hoping some manufacturers overhear. If I take a USB connector and plate the exterior housing with gold, all I'm doing is plating it with gold. It's about as useful as plating any other mundane item with gold, but perhaps even less valuable. This doesn't actually change how the signal is sent because the housing carries no signal. An argument could be made that galvanic corrosion will occur to a different degree on a gold-plated header, but unless you're leaving the keyboard plugged in for 10 years and walking away, I sincerely doubt any reasonable user will ever notice such an advantage. The only two hypothetical use cases I can come up with that would benefit from gold-plated connectors would be:

1 - If you're plugging in and unplugging your keyboard thousands of times throughout its life. Maybe you'll see a difference in the connection cycle spec for USB housing.

2 - Conversely, perhaps the plating could be beneficial if you plug the keyboard in and walk away, the gold potentially preventing dust buildup or some sort of chemical reaction (like oxidation). I haven't personally tried leaving a keyboard plugged into an unattended system for ten years, so I can't speak to this. Any chemists out there who'd like to comment? Drop us a note below.

Regardless, I'd just be very appreciative if we could stop spreading this "latency" misinformation. It's all marketing. Stop it.

Ending the Rant: Back to the Review - Feel & Functionality

The keyboard feels as you'd expect for Cherry switches. The actuation feels clean and precise and the keycaps are thick/sturdy in comparison to the rivaling G710+ and actually feel pretty resolute when typing. I do prefer the painted texture on the optional directional keys quite a bit over the 'default' texture of the keycaps, but maybe I'm just picky. Spacing seems reasonable for my typing patterns; I have no complaints about key width/shape and no complaints about key distance.

The positioning is compatible with my (rather selective) wrists when typing and the wrist rest is a much welcomed addition. Actually, the keyboard's texture as a whole is sort of durable feeling: Rosewill is using a rubberized coating across all non-keyed surfaces, which ensures we don't end up with fingerprints all over the keyboard and is easier to clean. The added USB and 3.5mm jacks have become one of my demands with keyboards after using many that host such ports; these are positioned well on the Apollo and make for good cable management when using headsets with longer cords.

Speaking of cords and cabling, the Apollo has a rather intensely thick, braided cable protruding from it (non-modular). The cable splits into a USB header and 2x3.5mm headers for the on-board audio option. The braiding and thickness effectively ensure that the cable won't be dying without significant, murderous effort on behalf of its owner.

One of the major deciding factors of a keyboard in my purchasing is the presence of media functions. Being able to easily cycle songs in-game without minimizing is hugely beneficial, volume control even more so for footsteps. This persists when working and idly listening to music or watching videos. Rosewill's got F1-F6 set up to handle media and volume functions when combined with the function key, located right of the space bar. This same function key can be used with F7-F11 to switch gaming profiles (user-made macro assignment), with F12 to toggle "gaming mode," and with numpad 8 + 2 to step backlight brightness.

Using Rosewill's included software, we're also able to map almost any key on the keyboard to some other function, application, or macro. There aren't any additional keys we can really map these to, so you've got to sacrifice existing functionality to use macros to their fullest extent. This software is shown in action in the above video review component.

It's not too impressive, but I suppose the tools do their job. If you're willing to give up a letter, number, or function key on the keyboard for something more impressive - like a macro - this will work well for you. Cycling profiles means that it's not too annoying to rotate back to a normal "typing" setup. I'm really not that impressed by the software's usability, but once figured out it's fairly straight-forward.

I've had some issues with keys sticking on the Apollo that I haven't had on the other MX Brown keyboards I've worked with more extensively. There doesn't seem to be any pattern to it -- maybe once a week, I'll get one key that will stick (like rrrrrrr) until I depress it again. I've put the keyboard through hundreds of thousands of keystrokes (primarily typing for the site) and have had this happen 4 times in total. I suppose that's not so bad given the amount of typing, but I'd feel much more comfortable recommending the keyboard if the number of incidents were zero. The G710+ and K70 have both survived far more keystrokes than that with zero occurrences of sticking keys, though they both have their own, separate issues that will be discussed in future reviews.

That said, I do like the keycaps quite a bit. They feel a lot more 'resounding,' if that makes sense, than a similar spec G710+. Less plasticky feeling.

Is the Rosewill Apollo RK-9100x Worth It?

This is a tough one to answer with this keyboard. I'm not unhappy with it, but I'm not blown away. We have to take price into consideration given the current saturation of the keyboard market, and at $150 across Newegg, I'm really not sure it's the best purchase. There aren't any additional "G-keys" for macro mapping, so it's sort of pointless to bother with macros in most cases since you're giving up some other key. The Fn+ enabled keys are impossible to use while gaming unless you're dead, so those can be effectively ruled out as quick options or gameplay controls. Let's take a look at the other options within price reach:

That's a lot of quality competition and there's very little differentiating a lot of these options. If you were to expand switch preferences outside of Cherry, you'd also find Razer keyboards (with internal switches) and Thermaltake's Poseidon Z (reviewing soon, also custom switches).

The point is that I'm just not sure the Apollo has anything to make it particularly exciting against these other options. It's not a bad keyboard, but I'm not exactly raving about it like I did with Logitech's G700s mouse.

Here's what I'd do: Determine what type of switch you want as this determines the feel of the keyboard. Once you've got that, look at the above options in appropriate switch types, the Apollo, and think about what extra features you really want. Media keys, additional function keys, and a numpad are part of this selection. Once that's decided, look at the remaining options and buy based on quality and price. Given my experience with the K70, G710+, and Apollo, I'd have to go with either the G710+ or K70 based strictly on cost and additional functionality. The Corsair keyboard screams "quality" and the Logitech one has got a lot of added functions (though is a bit large and the keycaps are more plasticky, so keep that in mind); the Apollo just sort of sits at $30 more without much to show for it.

If the Apollo drops to the $100-$120 price-point, I'd probably be telling you to heavily consider it. $150 is just far too much for what's being offered; the rubberized finish is nice and different, the keycaps are solid, but it isn't $30 nice and different.