Mechanical keyboards prevailed during the early days of the world's post-typewriter transition; some of IBM's earlier pieces -- like the buckling spring Model M -- have now become highly sought-after items in the world of keyboard enthusiasm. Mechanical keyboard evangelists would likely point-out that we didn't know how good we had it, but with time, membrane and other cheap keyboards rapidly became the norm. As gaming and PC hardware interest has kicked up, we've seen a revitalized focus on high-quality mechanical keyboards; this was discussed in more detail in our recent Rosewill RK-9100xBBR Apollo review.

Of late, we've primarily discussed keyboards using Cherry's somewhat ubiquitous MX switches. The MX switches are best-known for their color coding -- blue liked by typists, brown and red switches often celebrated by gamers, black for medium stiffness, and so forth. Although MX is arguably the most prevalent in today's marketplace, what with Corsair pushing it so hard (and Cooler Master... and Rosewill), there are plenty of other switch suppliers out there. One of them is Kailh ("Kaihua"), who've been making some of the most accurate Cherry MX clones since Cherry's patent expired. When we met with Thermaltake about their new Poseidon Z keyboard this year, we were told that they were "manufacturing their own switches" for the new keyboard -- ultimately, this meant that the company would be sourcing supply from Kailh. Not quite in-house, but Thermaltake staff were proud of themselves for deviating from Cherry. I can't say I blame them -- competition is a good thing.

The Poseidon Z ships in 'blue' and 'brown' switch editions, which can both be effectively thought of as equivalent to their Cherry sources of "inspiration." Thermaltake claims on their product page that the Poseidon's Kailh switches "actuate earlier and closer to the tactile feedback, offering a more accurate feel and faster response time than the other more commonly found mechanical switches."

As for the more standard features found on keyboards, they're all pretty much here. The Poseidon Z has 6-8 N-key rollover, hosts standard media playback alternative functions on F1-F7, adjusts backlight brightness with F11 and F12, and can toggle the Windows button with a hardware switch (do people still hit that by accident?).

Unlike some of the other, more expensive keyboards we've looked at, the Poseidon Z does not host on-board USB or 3.5mm jacks, regrettably does not offer a wrist rest, and does not have scripting or macro support. This keyboard is pretty straight-forward; its only real objective is to serve as -- you know -- a keyboard. And a fairly affordable mechanical one, too, given an oft-discounted price-point of ~$60 to $80 depending on where you shop. Thermaltake's alternative switch keyboard enters the marketplace at a desirable price for those looking to purchase a keyboard strictly for the mechanical aspect, rather than any other frills. Let's look into how it holds up given that understanding.

I think it's fair to say that most Chinese components that are "inspired" from mainstream Western devices are regarded with great circumspection. Looking inside of the Kailh switches doesn't help this, either -- they're almost an exact replica of Cherry's once-patented design, sans gold-plated crosspoints; a crosspoint (or crossbar) is the 90* perpendicular point of contact for the electrical switch under the keycap. This is part of what conveys key clicks to the system. Kailh's aren't gold-plated, but I suspect that this is still a patent Cherry actively holds. 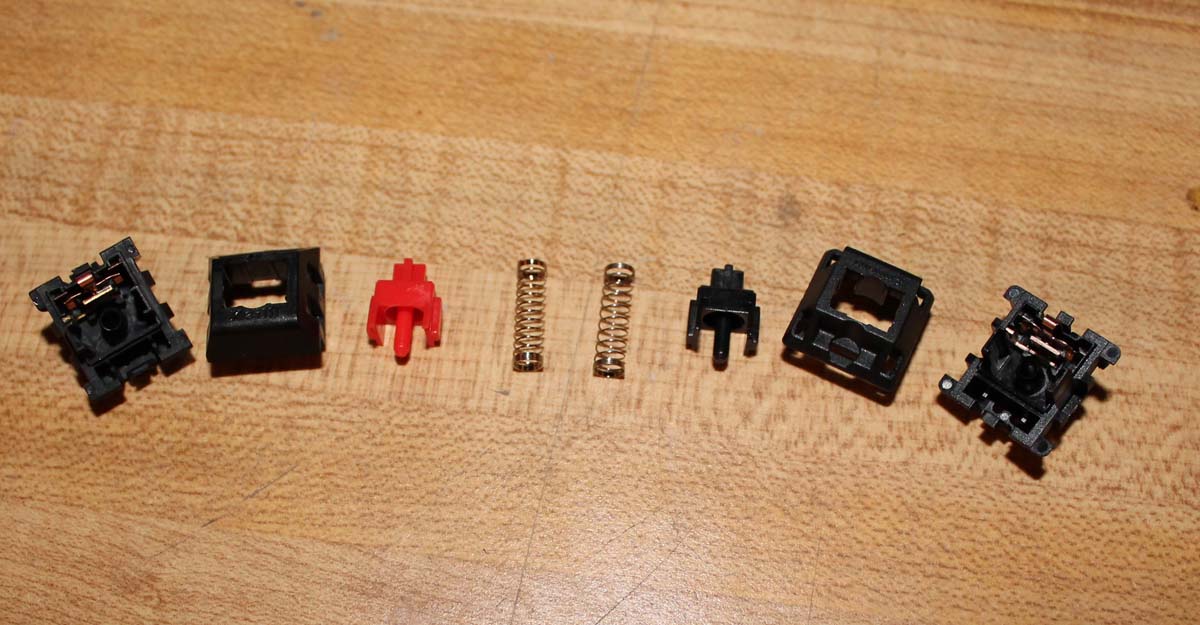 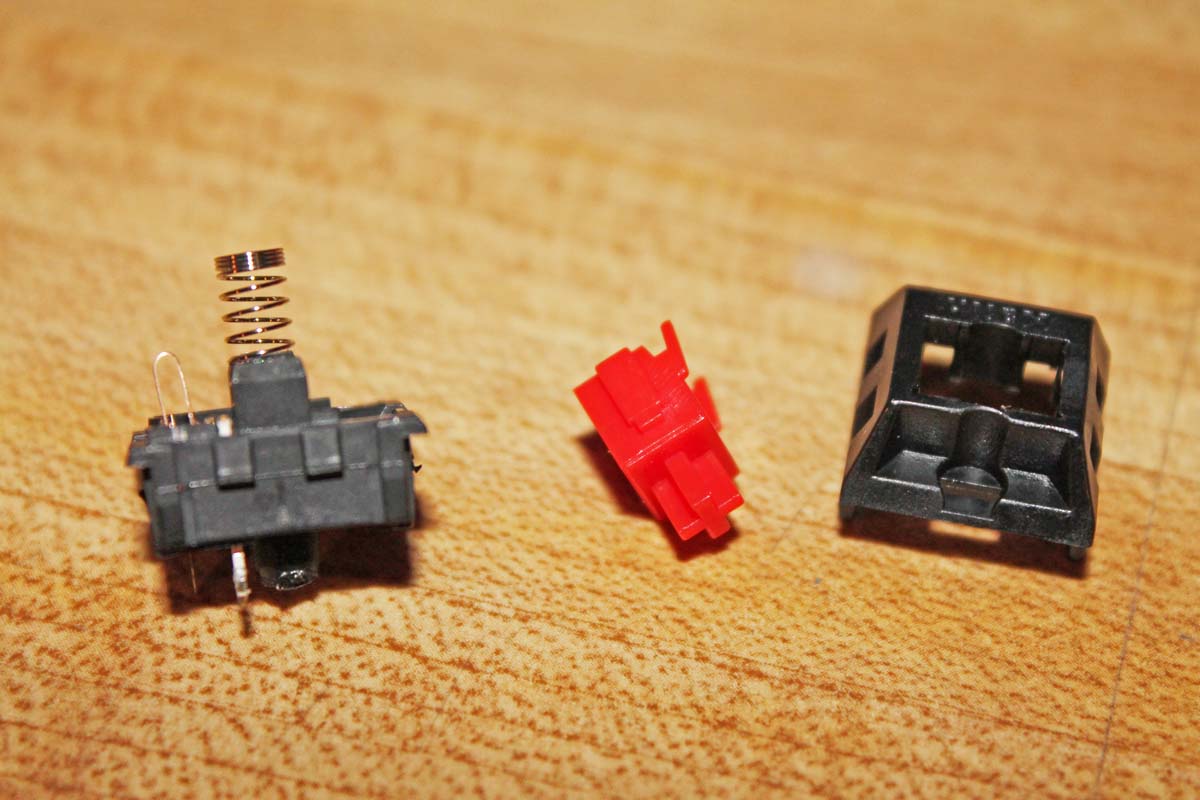 This photo by /r/mechanicalkeyboards' Ripster shows a Kailh switch (left) compared against a Cherry MX black switch (right), showing that the two are nearly identical in concept. Here's a graphic from Kailh that shows the actuation force and depth: 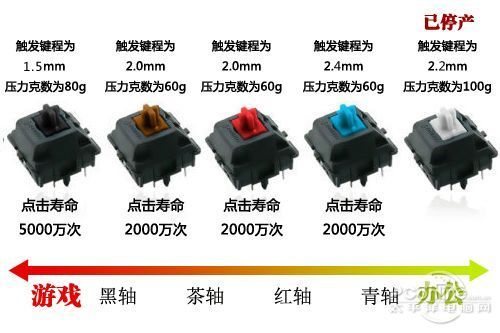 Just like Cherry's switches, the Kailh return spring is dead-center and the contacts are located at the back of the switch; beyond the crosspoint, the only other noteworthy difference is that Cherry uses thicker molding for support and consistently uses over-shell latches to encase the switch. I've seen Kailh use under-shell and over-shell latches to hold the switches together, though I'm really not too sure that this impacts endurance or usability in any meaningful way beyond ease of access (read: Cherry's are a bit harder to open up). 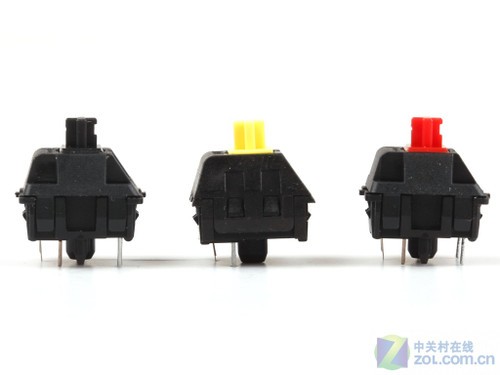 The short of all of this is that Cherry and Kailh are presently so similar in design as to be indistinguishable by the untrained viewer. Although thickness of material and crosspoint design is somewhat different, the two switch types look and feel similar enough that the massive price cut is likely justified for most buyers. The only place I'd lose confidence as a buyer would be durability of the switch over time; Thermaltake theoretically addresses this with a 5-year warranty on the Poseidon Z, though we haven't audited their warranty department yet (as we've done with Kingston, ASRock, and ASUS).

All this stated, with a 5-year warranty -- assuming Thermaltake doesn't leverage their "natural wear and tear" clause unfairly -- I feel fairly confident in selecting their Kailh switches over Cherry if the price difference is significant. There's a lot more to keyboards than just the switch, of course, so let's talk about the rest of the Poseidon. 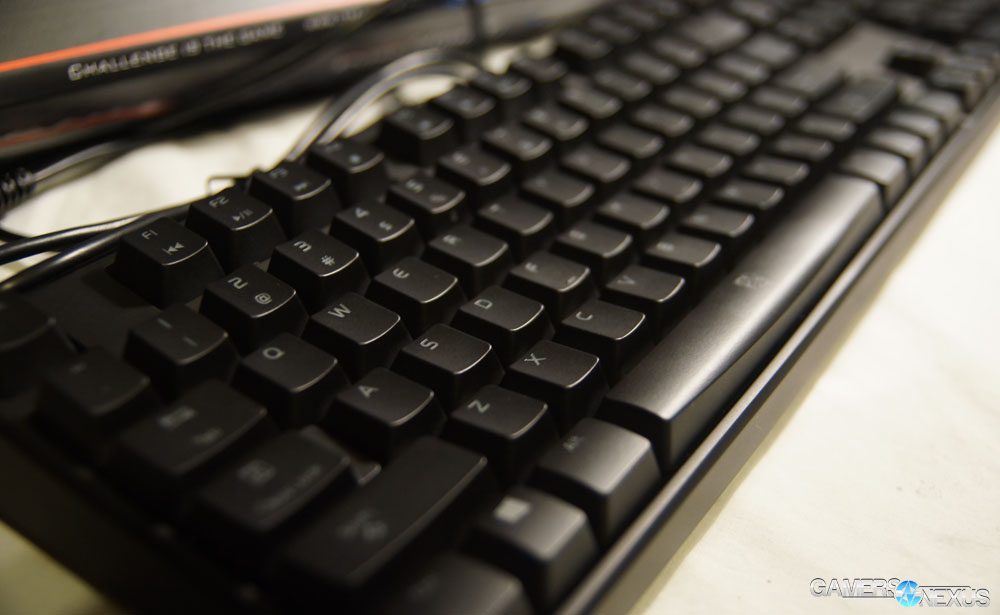 Prepare for heavy use of onomatopoeias.

Feel, 'clickyness,' and tactility are everything when it comes to a mechanical keyboard. That's why you're buying one -- to get a sturdier, more resolute feel when typing and a more responsive feel when gaming. Mechanical keys tend to return to position with greater speed than their membrane counterparts, potentially aiding advanced users in WPM and APM. The 'blue' switches in Thermaltake's venture actuate with more of a 'pop' (and resounding 'clack') than Logitech's more damped G710+ and corresponding brown switches; when blindly tested on a keyboard using MX Blue and Kailh Blue switches, I was unable to accurately identify the keyboard using MX Blue switches. Perhaps with more experience it could have been done (I've only been using Blue switches for about a year), but given my hands-on of the two, they felt basically the same in short-term use.

There's no doubt that these keys require a bit more effort / user endurance to type on over long periods of time, but that's going to be true with any Blue switch. I don't really find myself growing tired of typing on the keyboard, but the difference in effort required between the more damped switches and the Kailh blue switches is very noticeable. The effort is still comparable to Cherry, though.

As for noise, well, it's pretty damn loud. Anyone cohabitating with others in the same room (... or the next room over) may want to consider something quieter in effort of not being killed while sleeping. I kind of like the noise and 'pop' of the keys—after all, this is what mechanical keyboards became known for—but it does tend to make the room sound like a "press room" from the old days. If you're a journalist, well, hey -- you'll probably like that. If you like quietness and get anxious or stressed from a never-ending stampede of key clacks, then it's probably best to find something quieter and more damped. There is a brown switch-enabled Poseidon Z that may be quieter, though I haven't personally tested it. 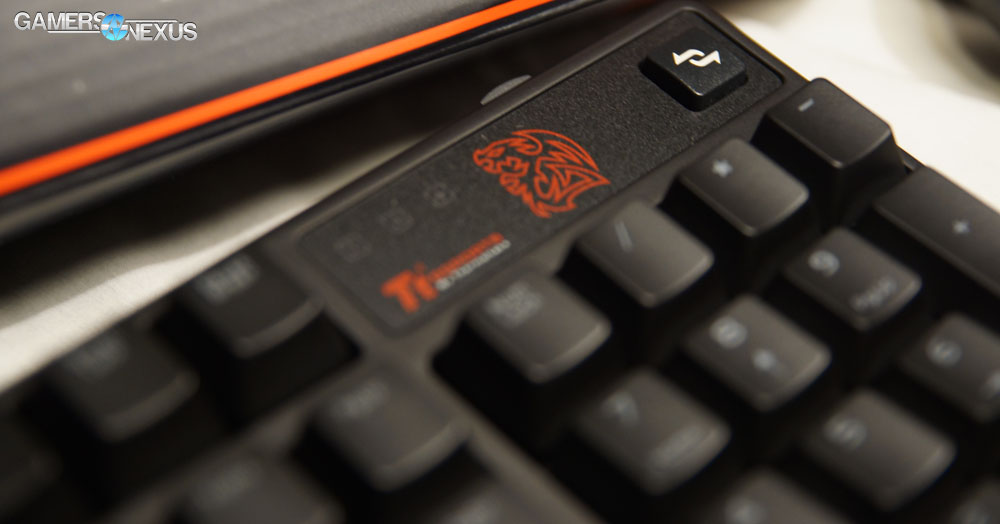 Key spacing feels normal on the Poseidon Z and is predictable. I had no issue with the key layout. The F1-F7 media keys are greatly appreciated and work fine while full-screen in games; obviously separate function keys are preferable as they don't require a combination to use (fn+F2 to pause, for instance), but by adding such a feature the cost would increase, so I can get over using the F-keys instead. 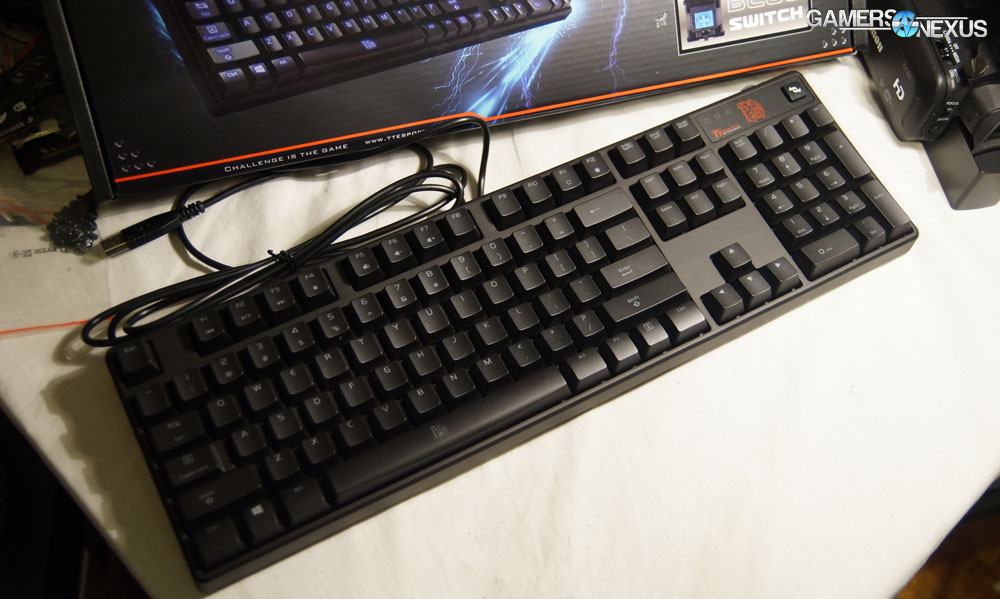 It really is a no-frills keyboard. Nothing mind-blowing in terms of extra features -- just a keyboard. And I think that's something worthy of appreciation, given the abundance of features on some of the boards we've reviewed (like the G710+, which has a volume wheel, G- function keys, a media panel, USB ports, and more). For the minimalist, I am comfortable recommending the Poseidon Z at its current $60-$80 price range. Alternatives to the Poseidon Z, including those priced higher, would most immediately include:

As for options in the immediate price range of the Poseidon Z, well, there's really not much available that matches the build quality and overall feel of this keyboard for $60-$80. The K65 is great, but it's also lacking a numpad. I'm always quick to recommend the K70 or Ducky Shine 3, but both are price way above Thermaltake's newcomer.

My biggest complaint is the lack of a wrist rest, which will ultimately be why I switch back to a keyboard better suited to my ergonomic demands; for those who don't have wrist issues or can mitigate the concern with a $10 wrist rest from any department store, it's probably still fine for you.

The bottom line is this: If you're looking for a mechanical keyboard for right around $70, the Poseidon Z is one of the best options out there.