There's no argument that RAM has become commoditized in the marketplace. This has been reinforced by furthered emphasis on appearances and the prevalence of high-capacity modules at relatively stabilized prices. DDR3 DRAM fabrication has also improved its yield steadily through the years, making high-frequency memory more abundant than ever. and Corsair recently told us that they've each almost completely halted production of 1333MHz consumer memory, primarily because the yield of DDR3-1600 is so high that lower frequencies actually have diminishing returns on cost.

As it turns out, RAM also feels like a relatively uninteresting component when selecting parts for a new system -- such is the nature of a stable product. It's similar to buying gas, in that regard; serious enthusiasts might deliberate over suppliers and octane specifications, but most users just fill up with the most convenient and affordable source. That's not to diminish the importance of quality RAM, though it does currently feel like a fairly stagnated market. Things will change in the face of DDR4.

Today we're reviewing & benchmarking  's new HyperX Fury memory, shipped to us at 1866MHz and in 2x4GB capacity. The HyperX Fury memory modules can be had in 1600MHz (2x4GB for $80) and 1866MHz (2x4GB also for $80) frequencies, with capacity choices between 4GB and 8GB modules. 's biggest push here is the color selection, which was polled amongst press while at CES 2014. Current choices include matte black, matte white (what we received), red, and blue. All the PCBs are black, a switch that occurred at PAX East last year.

The new Fury RAM is branded as just "HyperX Fury" with no "Kingston" in the tag at all, part of the company's new direction to further differentiate the HyperX gaming business unit from its core.

Our 2x4GB DDR3-1866 kit operates with a native CAS latency of 10-10-10-30 on 1.5v. The new Fury RAM will automatically detect the host platform and adjust its frequency appropriately, meaning that no initial BIOS tweaks should be necessary to achieve the spec. Up until memory started adopting this feature, system builders had to enable XMP or manually configure clock speeds to reflect the RAM spec, as Intel's modern platforms would default the frequency to 1333MHz. Things are pretty standard beyond this feature.

The Fury's most direct competition comes from G.Skill's Ripjaws X 1866MHz CL9 RAM ($84), Sniper memory of the same spec ($85), Corsair's Vengeance Pro 2133MHz CL11 RAM ($95), and a mix of ADATA / Crucial memory in the same price range. Ultimately, all of these listed / linked options perform pretty similarly in most use cases and identically in mainstream and gaming applications. It isn't until stepping into high-clock RAM (like the provided ADATA 2800MHz unit we tested, though clocked down to 2666MHz) that we see noteworthy gains in gaming performance. 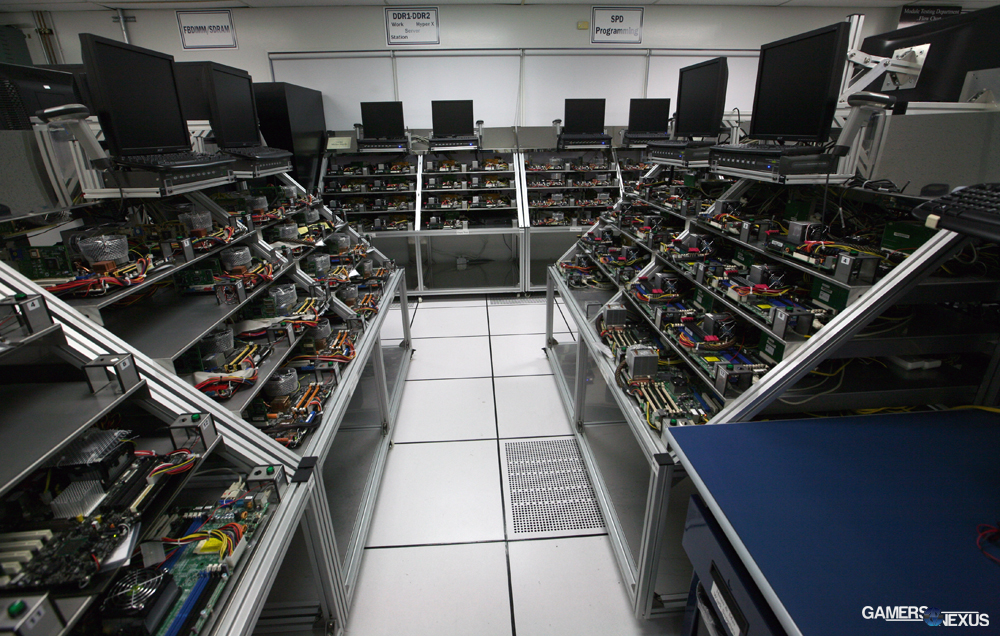 Where RAM goes to die. From our Kingston HQ tour last year.

This is pasted from our multichannel RAM benchmark, where we tested dual- vs. single-channel platform configurations.

I wrote a full-feature test case for this bench that was followed to the 't,' so each test was executed under identical conditions (beyond our one variable that changes). For trade reasons, we aren't releasing the start-to-finish test case spreadsheet, but I'll walk through most of it here. If you'd like to replicate my results, this should provide adequate tools and information to do so (please post your own below!).

Some standard benchmarking practices will go undetailed. Starting with a clean image, for instance, doesn't need much explanation.

We ran the following tools in the order they are listed:

Each test was conducted numerous times for parity. The shorter tests were run 5 times (Euler 3D, MaxxMem, Cinebench), the longer tests were run 3 times - because we do have publication deadlines (Handbrake, Premiere, After Effects), and the tests that produced varied results were run until we felt they were producing predictable outcomes (Cinebench). All of these were averaged into a single subset of numbers for the tables.

RAM was purged between all tests. No active memory management programs were present outside of the default, clean Windows installation.

Euler 3D is best-used when testing CPUs and memory. The program is freely available through Casealab. 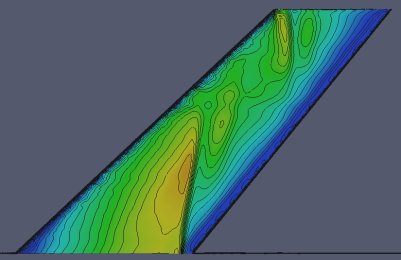 "The benchmark testcase is the AGARD 445.6 aeroelastic test wing. The wing uses a NACA 65A004 airfoil section and has a panel aspect ratio of 1.65, a taper ratio of 0.66, and a 45 degree quarter-chord sweep angle. This AGARD wing was tested at the in the 16-foot Transonic Dynamics Tunnel and is a standard aeroelastic test case used for validation of unsteady, compressible CFD codes. Figure 1 shows the CFD predicted Mach contours for a freestream Mach number of 0.960.

A lot of these words are fairly intimidating, but most of them are explaining that the test case is simulating a specific aircraft component at a specific speed. Simulation like this is a computation-intensive task that tends to demand high-speed components and multithreaded processing. CFD uses a computer model to calculate fluid flow (air, in this case). My understanding is that the test uses a complex matrix to calculate fluid flow at multiple points, then iterates (over time) with change in flow at surrounding points. Assuming this is correct, it means that we have to store values and access them upon each iteration, so RAM speed becomes important.

I should note that I'm not an expert in CFD -- not anywhere remotely close -- but after speaking with GN's resident physics engineer (Tim "Space_man" Martin), that was our educated speculation.

Regardless, you don't need to know how it works to know that a higher frequency is better. We ran the test with settings of "14 / 4," where 14 is indicative of the count of passes and 4 is the active thread-count.

A higher frequency rating is better in this test.

Anyone performing simulation or computation-intensive compiling tasks will benefit from these numbers; if you're in these categories, use this benchmark to judge how much multi-channeling matters to you.

MaxxMem is another synthetic test. I won't spend as much time here since it's a bit easier to understand. 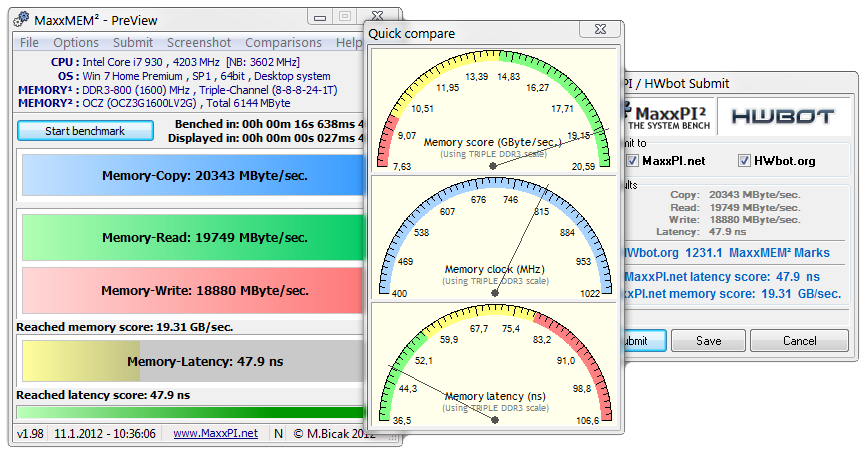 NOTE: These aren't our results. Just a program screenshot.

MaxxMem tests memory bandwidth by writing to and reading from memory blocks that are sized in powers of 2, starting at 16MB and scaling up to 512MB. MaxxMem executes numerous passes and averages the result, though we did our own multiple passes to ensure accuracy. MaxxMem attempts to address CPU cache pollution concerns upon reads/writes, which can become a problem with some real-world tests that will skew results if improperly tested. The test uses "an aggressive data prefetching algorithm" to test theoretical bandwidth caps during read/writes.

These just get quick mentions. Handbrake is a multithreaded transcoding program that has one video format / codec as input and another as output. We put a 9GB AVI recorded with FRAPS into Handbrake and spat out an h.264 (5.1 high profile @ 1080) MP4 at a continuous 60FPS with a 20Mbps datarate. In theory, this is CPU- and memory-intensive and will see the benefits of faster memory. 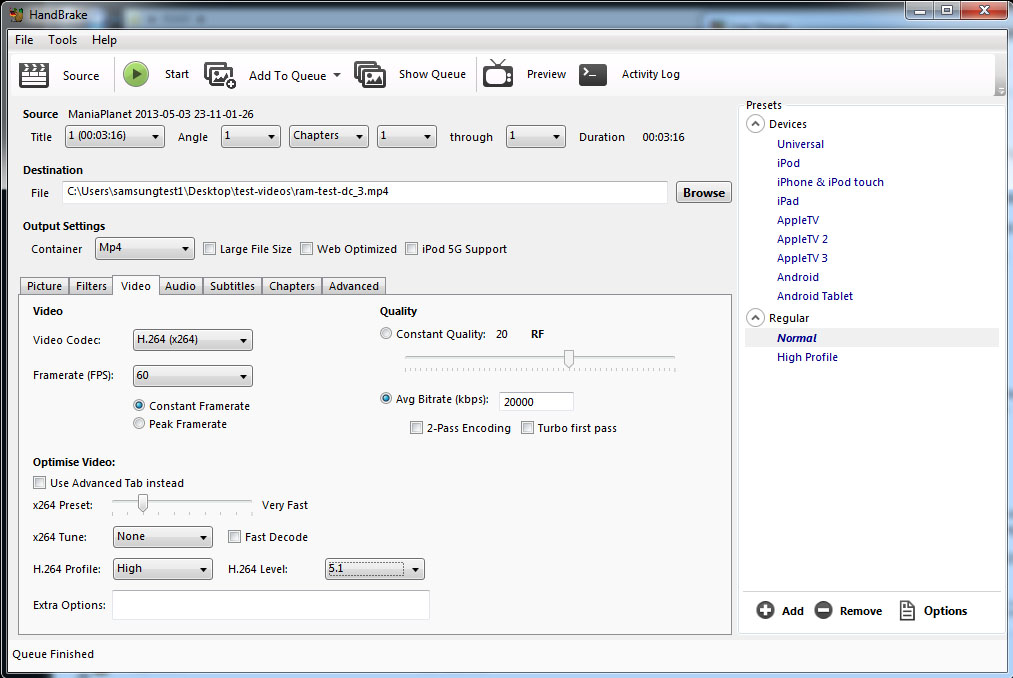 Cinebench is a pretty fun synthetic test to use. We relied upon the OpenGL benchmark, since that was the only one that would have any amount of impact from RAM differences. It runs a video and logs the FPS - pretty straight-forward stuff. This is more dependent upon the GPU and CPU than anything, but had some RAM variability.

I'm responsible for maintaining our entire YouTube channel here at GamersNexus (and do a good deal of hobbyist mountain bike video editing in my free time), so the video editing tests were of most interest to me. Premiere is an easy one, the test settings consisted of: 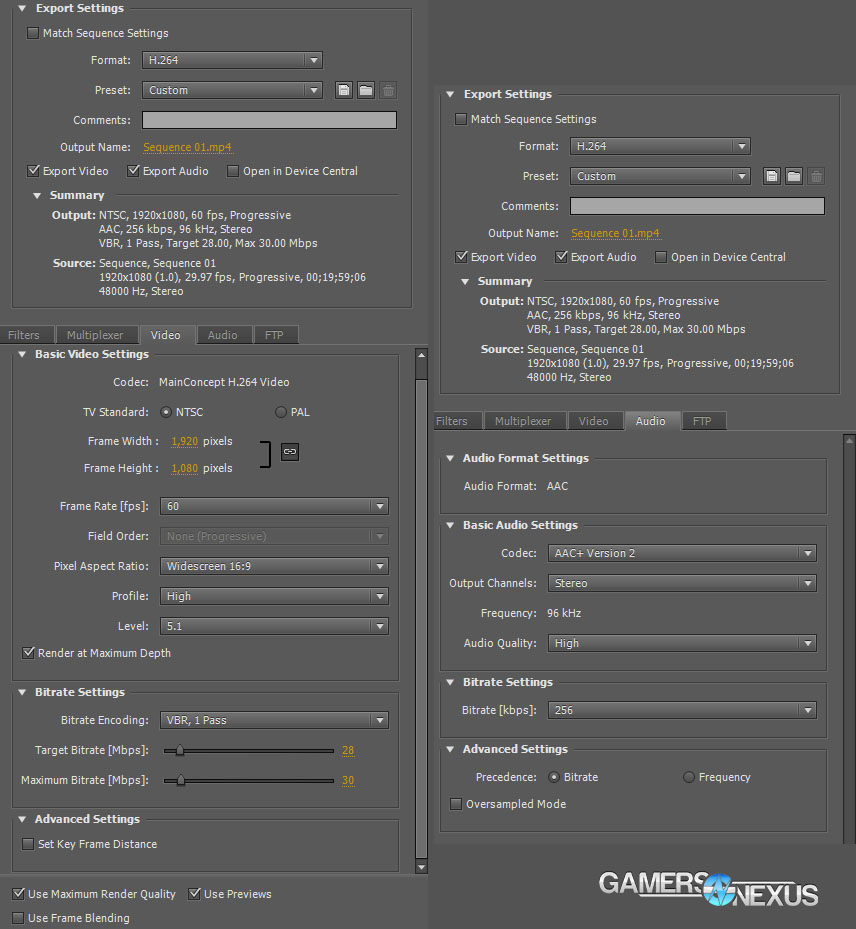 We rendered out a complex 10s clip that featured four 1080@60p videos shot at 24- & 28Mbps. The clips had color correction and other post-processing effects applied and were rendered at maximum depth.

To test the performance of memory configurations with After Effects, we put together another 4x1080@60p set of videos (down-scaled into quadrants) at 20-28Mbps. Two of the videos had color and exposure correction effects applied. We then previewed the video with RAM (RAM Preview) to check for RAM Preview stuttering or low framerates (expected). A video camera was set up to monitor the RAM Preview info panel for live FPS metrics. We used an external video camera so the results would be independent of the screen capture. You can view the test in video form on page 1.

Continue to page 2 for the benchmark results.