It looks like Office Space's best company is back in action. Inateck (not quite Initech) recently contacted us to request review of their KT4005 product, a 4xUSB3.0 port PCI-e expansion card that does nothing more than add extra USB3.0 ports to a system. Skeptical of this sort of thing, we decided to take Inateck up on the offer and benchmark performance using multiple devices connected simultaneously, all transferring at maximum bandwidth.

In this benchmark and review of Inateck's KT4005 USB3.0 PCI-e card, we look at sequential and random throughput using various USB3.0 devices.

It's pretty simple stuff, really. The device is comprised entirely of a couple ICs, some capacitors, and four externally-accessed USB3.0 ports. It is almost a certainty that the KT4005 is a supplied rebrand by Inateck, but that's fairly common within the industry anyway (see: power supplies). The target user here is pretty straight-forward, too: Someone who'd like an additional set of USB3.0 ports or can't make use of their front panel USB3.0 header due to board limitations. 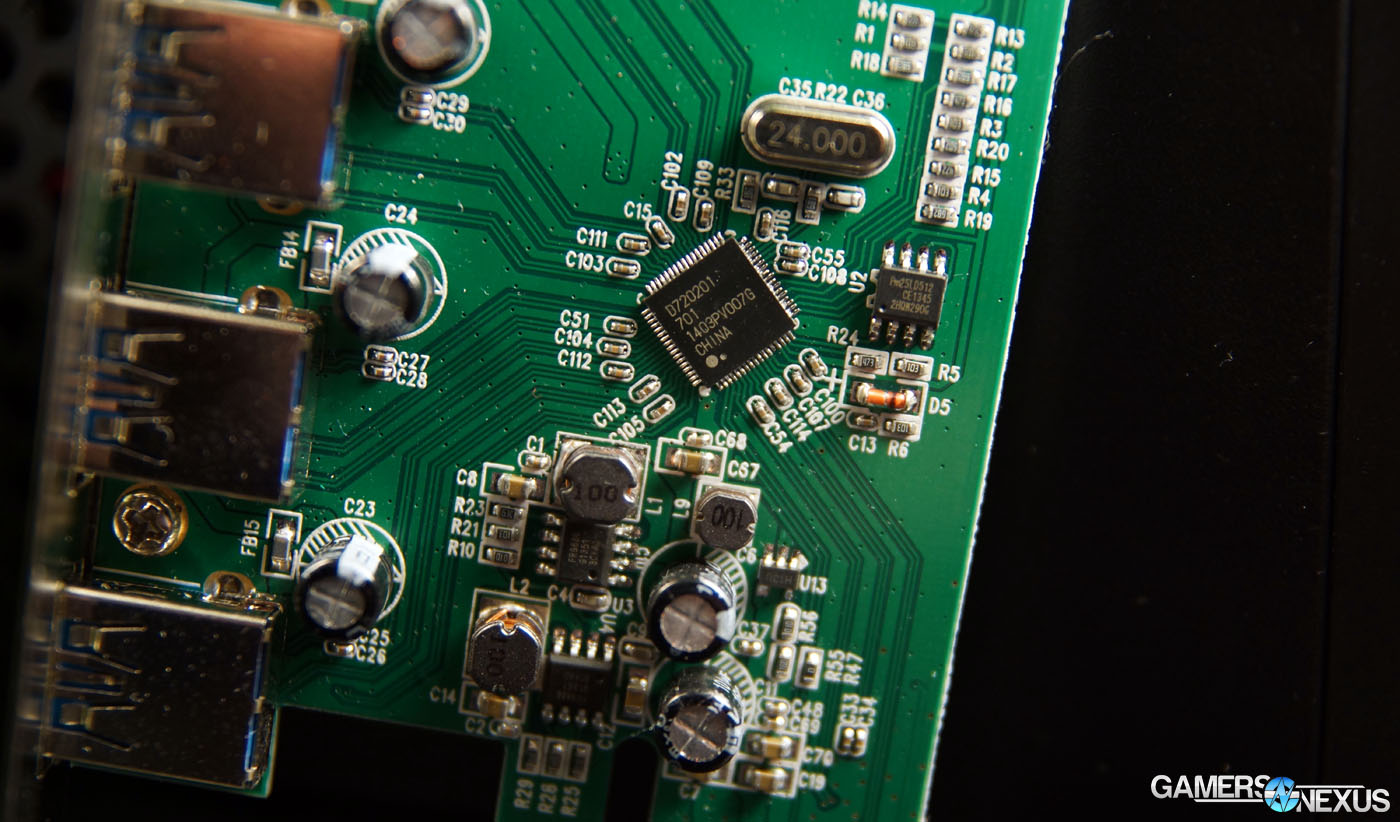 Testing this type of device is a bit different from our usual methodology, but is in-line with something I did at a larger corporation when USB3.0 was brand new.

We used two types of devices (four total devices) to test the KT4005:

The DataTraveler is a bit faster than the Voyager, but as long as we're establishing baselines, that's fine. Each device was tested individually and independently using the on-board USB3.0 port and the KT4005's USB3.0 port, using HD Tune Pro and CrystalDiskMark to test throughput. After these tests, the devices were connected simultaneously to the board and to the KT4005 card, then attacked with simultaneous disk benchmarks. The idea here is to challenge the maximum throughput of the USB3.0 controller and the device, ultimately determining whether it can truly handle more than one simultaneous mass file transfer.

The latest device drivers were used for the NEC controller.

This image is one of the most uninteresting benchmarks we've ever produced. Shown here, Corsair's Voyager retains full speeds on both the on-board port and the KT4005 port, proving that it is in fact actual USB3.0 on the PCI-e expansion card. Any disparities are largely within margin of error.

The stick is a bit faster and should push the limits better. Again, many of the differences are within margin of error, although the on-board tests are consistently faster by just a little bit. This is potentially overhead / latency that is introduced by the expansion card. Performance is excellent, so far. 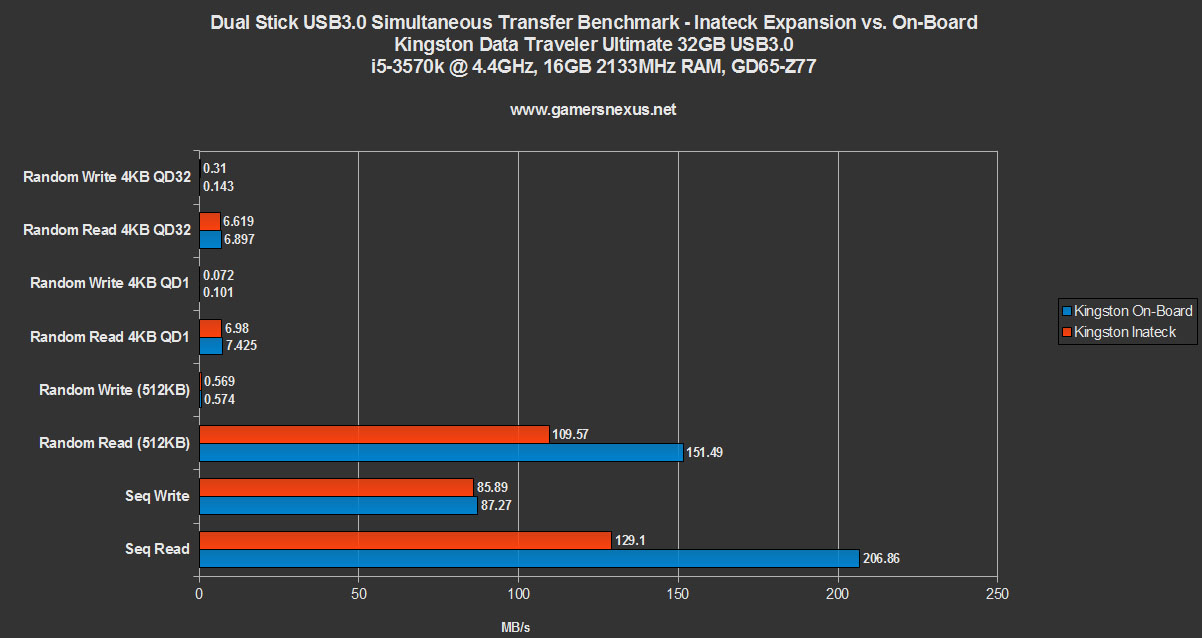 In this test, we see the Inateck device performs just fine up through 512KB Random Reads, at which point it begins to suffer from being heavily loaded. The two saturated on-board ports are able to carry a 151.49MB/s read consistently, with the Inateck device falling to about 109.57MB/s. That's a pretty big hit, but not too bad considering the $16 price-point. Sequential writes appear to perform fine, though sequential reads fall again - this time from 206.86MB/s to 129.1MB/s.

Sequential transfers are the ones you'd be most interested in if you're going to be migrating a lot of mass file content between USB3.0 devices (like movies, music).

Similar results to these were produced when testing three devices simultaneously.

Conclusion - The KT4005 Surprised Us 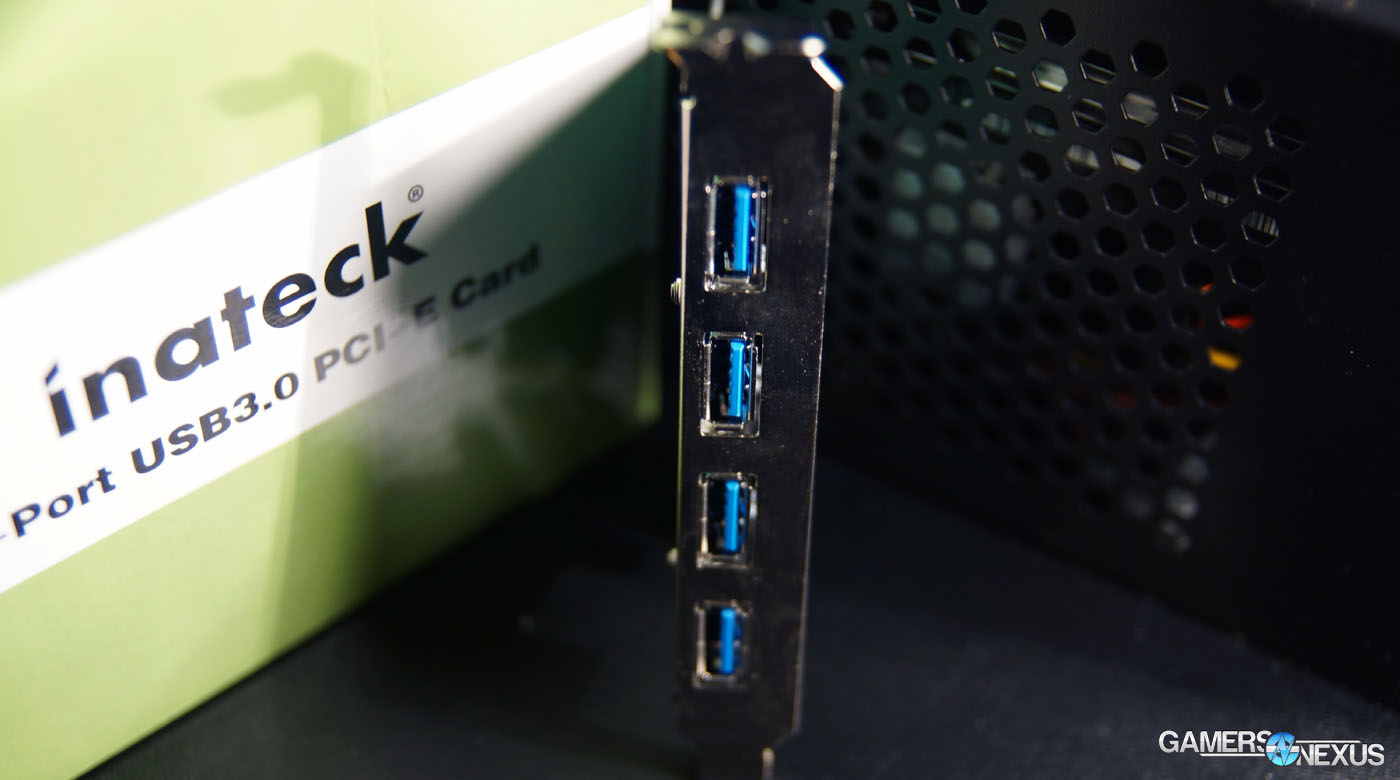 I really wasn't sure what to expect when I received a cold-call review request on this one. Actually, I'll tell you what I was expecting -- I figured we'd get something that wasn't even proper USB3.0. But I was proven wrong, and I'm happy to say that.

The first card that Inateck sent us proved to be defective. Our connected USB3.0 devices would sporadically disconnect during use of the card, which halted testing and corrupted file transfers (as one would expect from a sudden disconnect). This was pretty discouraging, but the company shipped a second sample for testing. The second is what produced our above results and seemed to work properly with zero sudden disconnects over the course of somewhat extensive attempts to force them. As long as this was a fluke and isn't a common occurrence -- and as long as they treat their customers like they treat the press -- I can overlook it. But it is something I wanted to mention.

Although there's a big performance hit during simultaneous mass transfers, the card performs fine when it's only performing one load-bearing operation at a time to the USB devices. And even with two going at once (at 100% I/O saturation, which really stresses the buses and controllers), it still performed considerably well when looking at the $16 cost.

If you just need a few USB3.0 ports added to an existing setup and won't be applying significant load to multiple connected devices (with regularity), the KT4005 is an affordable, reasonable choice. If you're going to be performing regular mass file transfers between multiple connected devices, it's best that you look elsewhere; reasonable alternatives with higher multi-device performance are going to cost closer to $40 and require SATA power, like this one. You shouldn't expect to be able to run four simultaneous, I/O-intensive transfers with the KT4005, but one or two at a time are possible.

All-in-all, not bad for $16 to allow some new device connectivity.