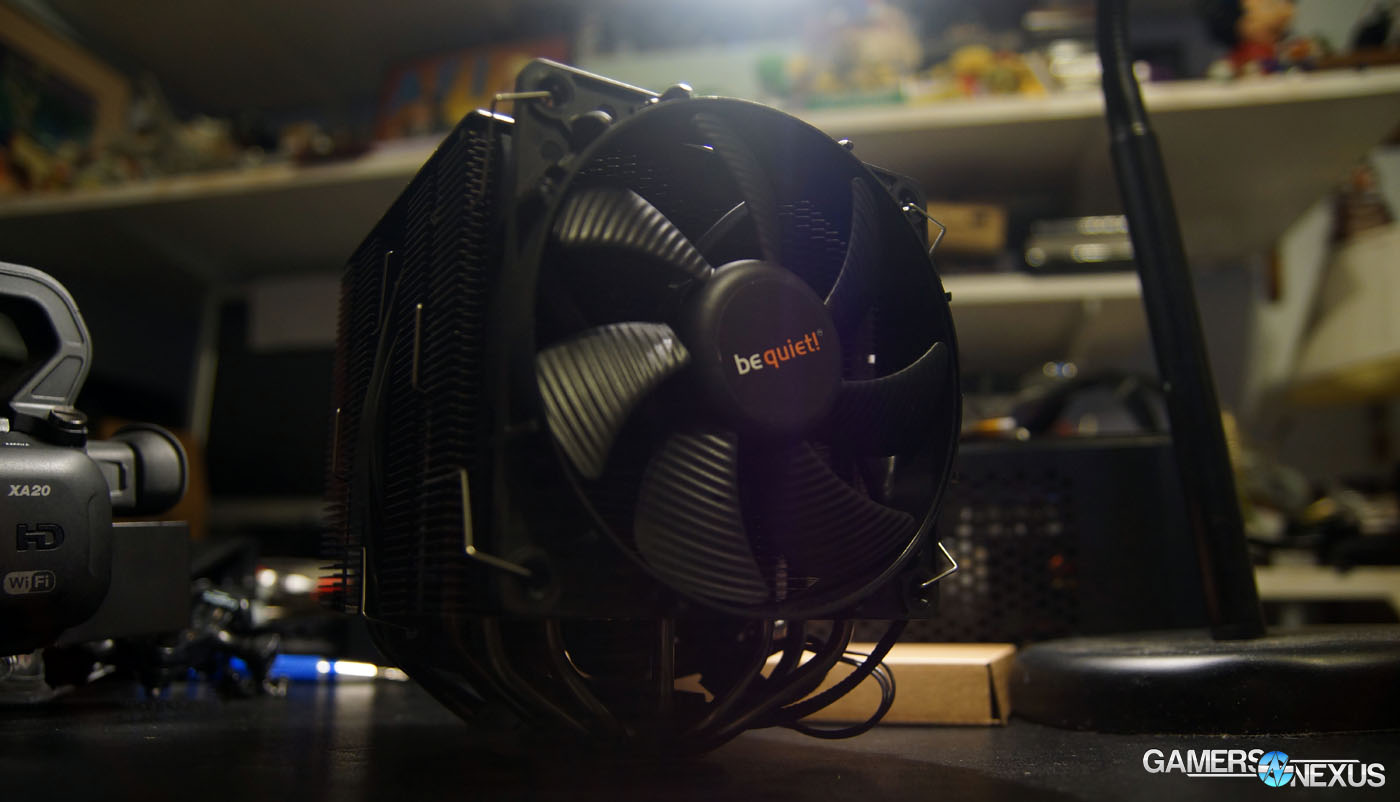 The advent of a new technology does not necessitate the invalidation of long-standing solutions. Just look at tape drives: , archival, and government organizations still use a storage technology established in the 50s. Granted, governments are not necessarily the paramount of competent technological deployment. This sentiment of archaic persistence remains true in the world of cooling, too; CPU air cooling has reigned supreme as the most cost-effective consumer dissipation solution, and even with CLCs dominating the market, air still has its place.

We've often remarked that high-end air coolers will beat-out low-end liquid coolers any day -- the Corsair H60 comes to mind -- and this is a chance to put the concept to the test.

In this review of Be Quiet!'s Dark Rock Pro 3, we benchmark the performance of the hardware world's most monolithic CPU cooler.

There's something about being physically imposing and plated in nickel that lends a perception of quality to a CPU cooler. By no means do these aesthetic traits guarantee cooling prowess, but they certainly have "the look." The Dark Rock Pro 3 towers over other system components at a somewhat commanding 150 x 137 x 163mm (5.9" x 5.4" x 6.4"), almost resembling a Borg Cube in appearance.

The unit includes two fans in a push/pull setup. The inner fan -- buried within an alcove of nickel-plated aluminum -- is sized at 135mm and pulls air from the outer fan, sized at a more standard 120mm. The fans are PWM-controlled and are rated for 1400~1700 RPM, pushing a reported 67.8 CFM at 12V. Somewhat reasonable RPM and fluid-dynamic bearings ensure an overall bearable noise level rated at a maximum of 26.1 dBA (100% RPM). The first few hours of use yielded an incessant whining noise, but that rapidly died down as the bearings were burned-in to their new homes. This is a good thing, considering you'll be listening to the fans for the effective life of the system -- the cooler's fans are rated for 300,000 hours of life. 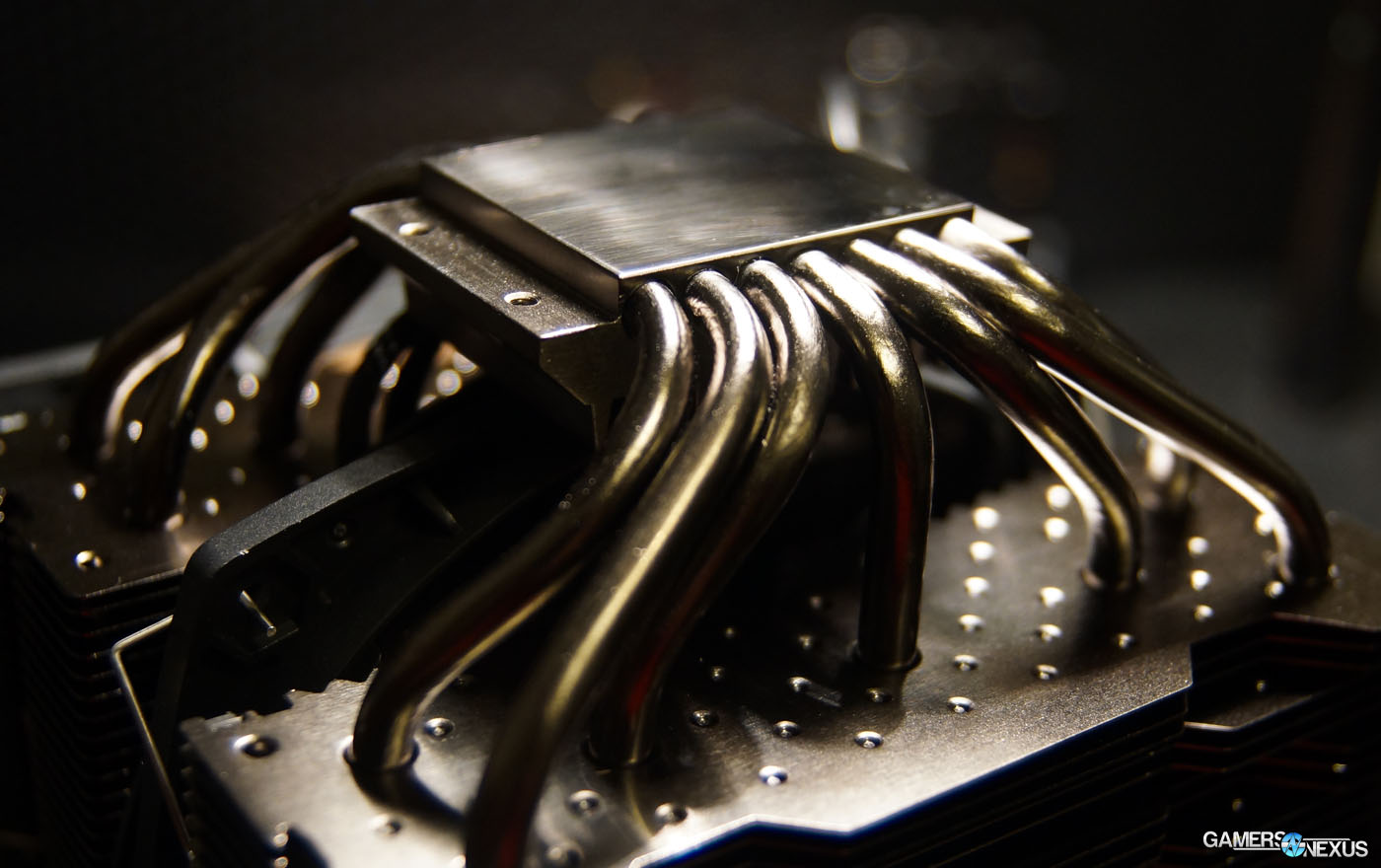 Interestingly, the middle fan can daisy chain off of the primary fan in such a fashion that the dual-fan setup only saturates a single CPU_FAN header on the board.

In terms of the actual hardware handling the phase changing and cooling (read about how CPU cooler work here), the DRP3 uses a dual-tower design with 7x6mm heatpipes to perform the heavy-lifting. That's two aluminum towers gapped by the 135mm fan, making for a somewhat unique design among air coolers. 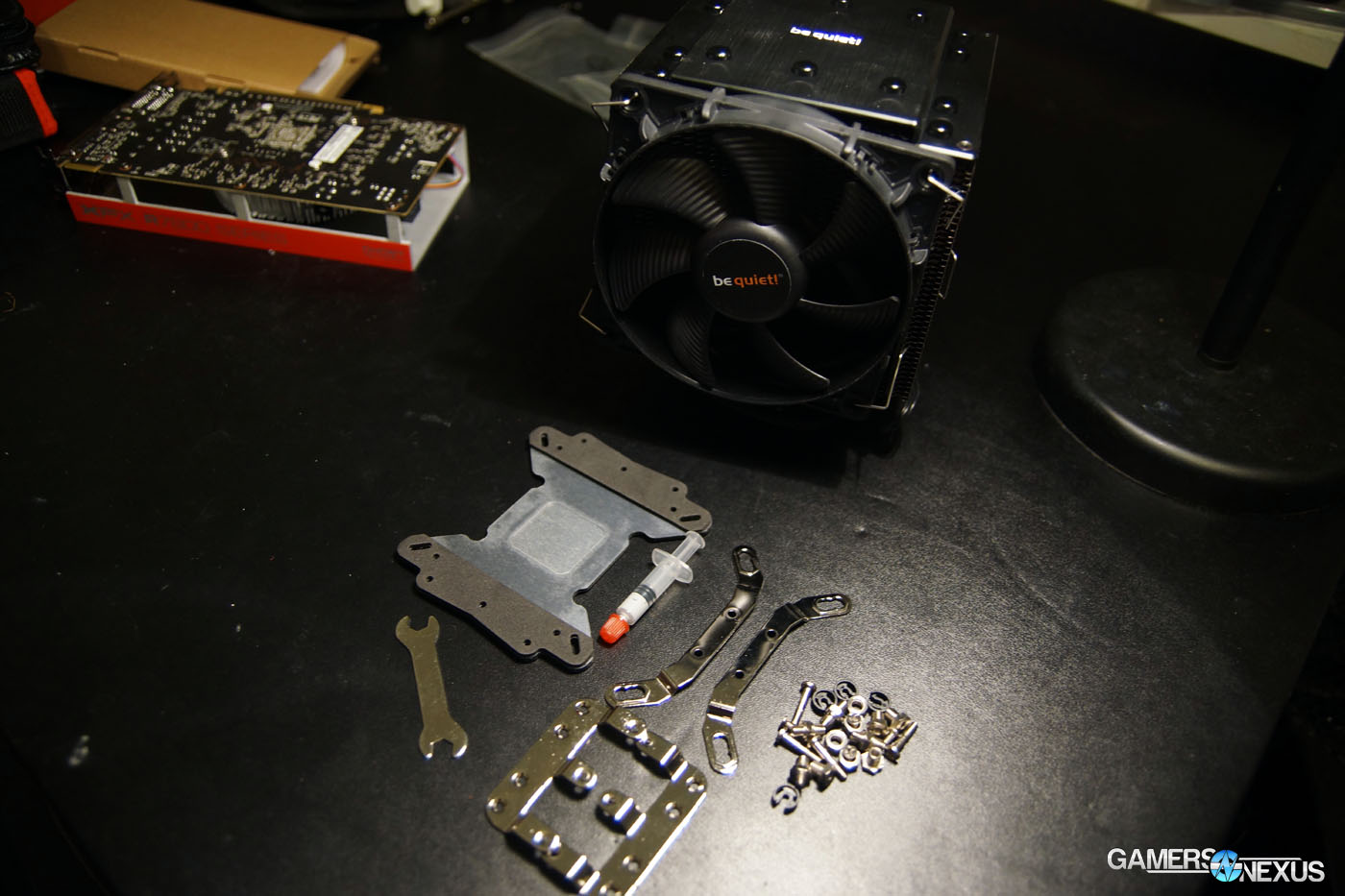 After testing so many CLCs recently, I'd almost forgotten what it's like to complete a cooler install with five bloody knuckles and a blood-stained heatsink. Anyone who worked with the pure copper coolers of the early 00s knows precisely what I mean. The fins back then were razor sharp, too ("when I was yer age...").

The problem with the Dark Rock Pro 3 is an obvious one: It's effing big. Using a motherboard with flanking VRM heatsinks guarantees a painful night of cooler mounting. Anyone demanding this type of hardware will certainly be on a board with VRM sinks, too. 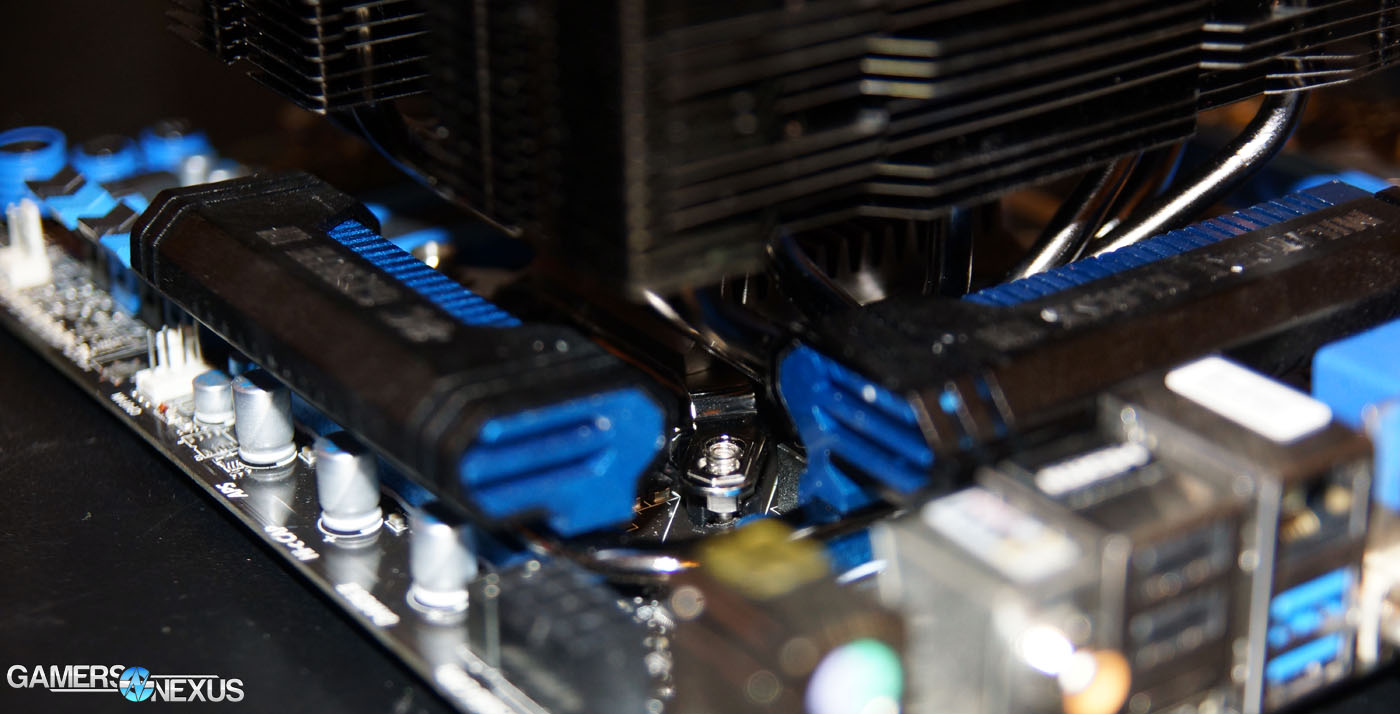 Don't install it this way. Mount the nut to the bolt prior to placing the heatsink -- this is just impossible.

First, the backplate is installed for support. Four screws are inserted through the drilled holes, with plastic clips to receive and secure the screws on the CPU side of the board. Once you've got the screws temporarily secured, it's time to prepare the heatsink. A pair of brackets must be screwed to the cooler itself (rather than the board -- a bit unconventional), with more screws being socketed through these brackets. These screws are then capped with a nut, then the original screws (from the backplate) are screwed into those.

If I've lost you, it's OK -- that's normal. The provided manual is sorely lacking in clarity when it comes to best practices with the cooler. I'd originally attempted to mount the entire cooler before capping the screws with the nuts, only to realize that it was genuinely impossible to do so due to the overwhelming size of the unit.

The best way to go about this is to find another pair of hands. Ideally a pair of hands in the non-fat variety, as it'll make your lives easier. If that's not available, I'd suggest hanging the board over the ledge of a table, crouching under it, and screwing in the screws that way. Just trust me. Craning your neck for a moment is far better than jamming knuckles into aluminum fins for 20 minutes.

The installation process for the DRP3 is one of the most over-engineered, painful cooler installations I've ever had the misfortune to experience. It's not quite as infuriating as Antec's 1250 mounting plate, but it's close.

That said, I can get over aggravating installation if the performance is good enough.

Continue to page 2 for the benchmark & performance results.