Back in the day, one keyboard reigned supreme -- the IBM Model M. A buckling spring keyboard that informed supervisors how hard their cube-slaves were working due to its loud sound upon actuation. But these wonderful times did not last forever. The membrane switch was developed, which was far cheaper as a result of using a rubber dome instead of springs to register keypresses, and since that day mechanical keyboards grew more scarce.

The mechanical keyboard industry has been expanding. Fast. Cherry MX mechanical switches are the primary switches sold, but there are competitors in the marketplace. Tesoro has been expanding into the North American market with their mechanical keyboards, adding yet another name to the myriad of brands currently on digital shelves. Interestingly, like some other brands  -- Razer and Thermaltake included -- Tesoro is using Kailh mechanical switches in their keyboards instead of standard Cherry MX or Topre switches.

Kailh switches are essentially copies of the Cherry MX switches with some small adjustments. The reason they are becoming common now is that Cherry’s switch patent expired, allowing Kailh to sell switches based off the same design without instigating legal troubles. Previously, these switches were not sold in North America due to the patent, but they were sold in Asian markets where they made a reputation of being lower quality than Cherry MX switches. Razer adopted Kailh switches quickly after Cherry’s patent expired, and made claims of improving quality control and manufacturing tolerances, and this appears to have come to fruition. We go more in depth about Kailh switches in the Poseidon Z review for those of you who are interested.

The turn towards Kailh switches is certainly interesting and actually beneficial in the way of extra competition for Cherry. 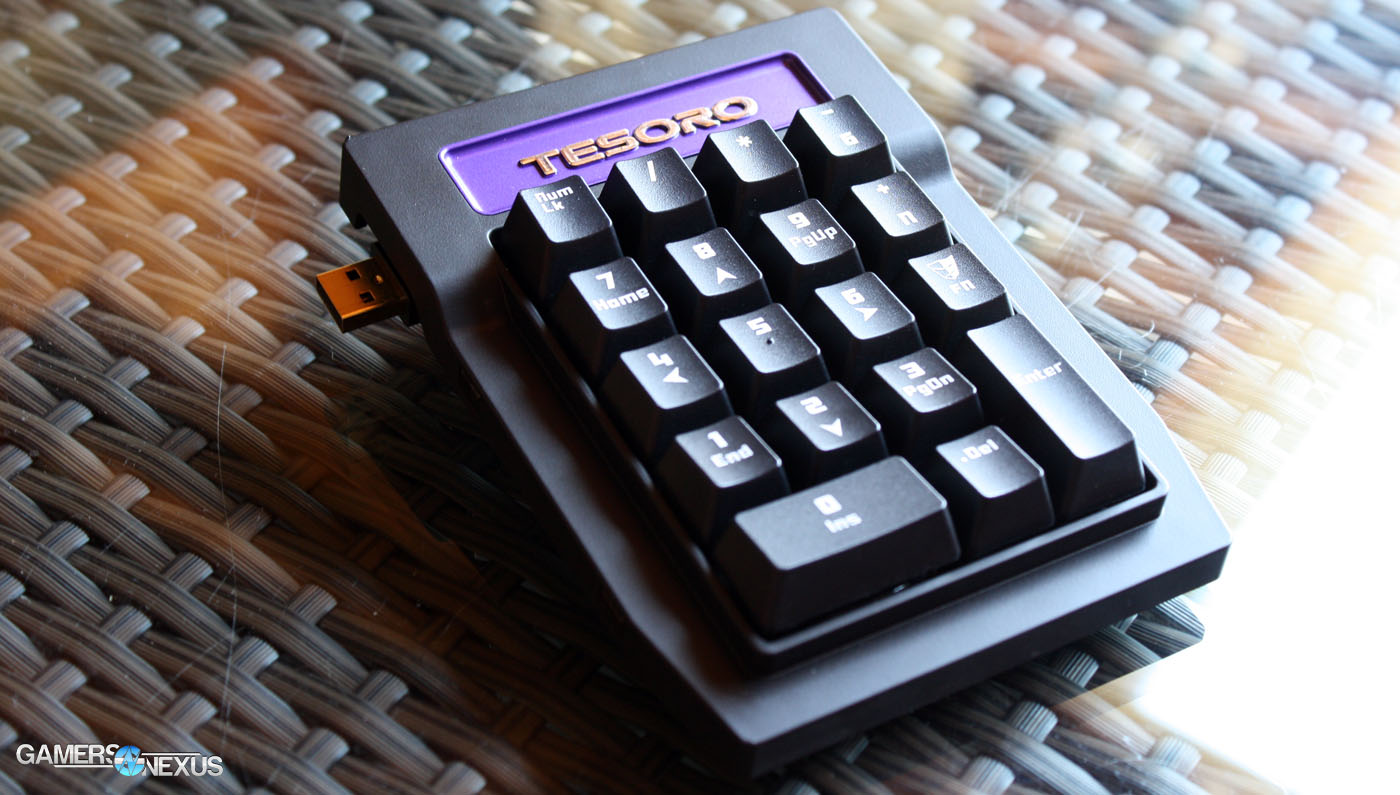 When I first used the Tesoro Tizona G2N Elite -- heretofore referred to as the “G2N Elite” -- I was most excited to go back to using my Cooler Master Quickfire Rapid TKL. Not high praise. But as I continued using the G2N Elite keyboard, I really began to appreciate its features despite the quirks. The G2N Elite is fairly standard in that it has N-key rollover (with toggleable 6 key rollover), media commands via the F1-F6 keys, and a gaming mode that disables the windows key.

The G2N Elite also features 2xUSB 2.0 out (with up to 500mA with the optional DC-in connector used), 3 thumb macro keys below the spacebar, and a detachable keypad that’s sold for ~$30. This detachable keyboard is one of the most notable features of the G2N Elite keyboard, and can be connected via one of the USB ports on either side of the keyboard. The keyboard and keypad also have magnets built into the side to help secure them to the side of the keyboard. The fact that this keypad can be used on the left or right is quite handy for lefties, and for those who dislike keypads on the right side. A huge market, to be sure. Massive. Definitely.

The keypad also comes with a separate cable for those who want to use it detached from the G2N Elite. One issue I have with this keypad is that there is no LED indicator of whether the numpad is active or disabled.

As for the thumb macro keys, I have mixed feelings about their usefulness. The left one opens the default internet homepage (do people still use those?), the middle one opens the default media player, and the right one opens Microsoft Outlook. It is somewhat convenient, but they cannot be reprogrammed and the rightmost button will only open Outlook, no other program even if it is the default mail program. The lack of ability to remap the Outlook macro is quite disappointing and should’ve been considered due to this being marketed as gaming keyboard -- not an office keyboard.

In “gaming mode,” the left macro is the “/” key, with the middle being the “*” key, and the right being the “-” key. The rationale behind this is that controls can then be remapped to those rarely-used keys. The thumb keys have some use, and I'm sure a select few will love them, but I think for many (myself included), it will simply be a gimmicky feature that’s rarely used.

Gaming mode disables the Windows key and places indicators for Caps & Scroll Lock stylishly above the arrow keys; each has two slits for the LED to show through, for no particular reason beyond aesthetics.

Even being a picky person about cables, I was very satisfied with the cables that came with both the Tizona G2N Elite and its keypad. Both had high-quality fabric braids and no heatshrink at the ends, but the additional DC power-in (that provides additional power to the USB ports) isn’t braided. This is disappointing, but its optional use case makes it little worse than a disappointment. The choice is understandable to help keep costs down. All of the cables for the G2N Elite are also removable; even in the case of a break, they can be easily replaced.

The gold-plated USB connector on the G2N Elite is one area that isn’t a problem, but is just unnecessary. The inclusion of gold-plated connectors is largely a gimmick that only increases cost. We discuss this more in the Rosewill Apollo review, if you’re interested. I wish that manufacturers would choose to skip this useless “feature” that only increases cost, even if the increase is small.

The feel of the Kailh switches is actually very similar to the feel of Cherry MX switches. The sample we received had blue Kailh switches. The Kailh version of blues seems to have a sharper click, slightly easier actuation, and a tiny bit rougher feeling compared to Cherry MX blues. Overall, Kailh blues feel extremely similar to Cherry switches. If I hadn’t been told that the Tizona G2N Elite featured Kailh switches instead of Cherry MX switches -- and if I hadn’t popped a cap off to check -- I would’ve attributed the minor differences to varying batch quality.

More importantly, I’ve yet to have an issue with the Kailh switches, which gives more weight to their claim of 50 million keystroke before failure -- the same as Cherry’s. We’ll see if time changes this.

Speaking of switch quality, the G2N Elite is quite sturdy. As with many other mechanical keyboards, the G2N Elite uses a metal plate for mounting, ensuring that it is durable for regular use and can withstand heavy abuse. The keyboard (and its additional height feet) have anti-slip rubber pads to keep things in place during those “heavy abuse” sessions.

The keycaps on the G2N are of average quality and the font is fairly legible. The only issue I have is that on the - and = keys, the symbols are all crowded near the top, making it look a bit odd. Interestingly, this is different than the picture on their site. Not really anything that deducts from overall score or feeling, of course.

The stock keycaps are slightly taller than they are wide, but normal-sized aftermarket keycaps fit without hitting each other, so there is no reason to worry about being unable to replace the keycaps. The function and esc keys have the Tesoro logo on them, but I think it’s well-implemented, similar to the Tesoro logo on the keypad.

The warranty is a bit short at 1 year, especially compared to Tt eSports’ 5-year warranty on Kailh switches. That said, one would hope that most problems due to manufacturing defects should become apparent by then, assuming regular use.

In the end, the Tizona G2N Elite by Tesoro left me yearning for more. On one hand, its MSRP is fairly competitive at ~$90 for the features and quality it brings, but some of these features are oddly-implemented and could see some simple improvements. An example would be remapping of the thumb keys.

Features like N-key rollover, 1000Hz polling rate, and braided cables are certainly good, but nothing too out of the ordinary with mechanical keyboards.  The quality control seems to be fine compared to some other keyboards using Kailh switches. That said, I would like to see a longer warranty for assurance.

The most unique feature of this keyboard is its optional numpad, easily mounted on either side of the keyboard. The MSRP of the keypad is ~$30, bringing the total for the pair up to around $130 (the G2N being ~$90). The cost of the Tizona G2N Elite alone (~$90) is a bit higher than I would prefer. Personally, I really enjoy the G2N Elite despite its quirks, and it has now become my daily keyboard. The left side-mounted keypad is a godsend in my opinion and I would gladly pay extra for it, but for many users this is insignificant.

The keyboard is a bit of a niche product -- namely for users who need a left side numpad or thumb keys; for users looking for a more standard keyboard, better value can be found elsewhere -- like the CM Storm Quickfire XT ($90), CM Storm Quickfire Rapid TKL ($80), and the Logitech G710 Plus ($120) are generally better choices. If the Tizona G2N Elite dropped to $70-85, I would suggest it alongside the other keyboards I mentioned above.