The Tesoro Gandiva H1L comes with all the buttons expected for a mid-level gaming mouse, including the standard LMB, RMB, MMB, a scrolling mousewheel, and forward and back (M4 / M5) on the left side. There are DPI (sensitivity) up/down buttons to the right of the left mouse button, offering a total of 5 DPI modes. There's also a DPI cycle button in the center of the mouse for quickly swapping between user-defined sensitivities.

I've used the Gandiva for web browsing, document editing, graphic design, and gaming applications for several hours. Even after that time, I still find the “feel” to be ergonomically poor for people with large hands. Above all, it’s difficult to rest my hand comfortably while also executing clicks and button-presses, so I have to grip the mouse more tightly for relatively precise control. Some of my lower hand and part of my wrist drag along the mouse surface, making full motions uncomfortable.

The left mouse button keyplate takes more force than usual to execute a click, so high-APM in an RTS or firing a semi-automatic weapon in a shooting game won’t bode well. I have to “claw” my index finger a little to execute a proper click, an uncomfortable mechanic when repeated over and over. I occasionally feel a little friction when I click; sometimes there’s no “snap” to the button when I release it. And for more regular applications like browsing a series of folders, double-clicking is more cumbersome. This seems like an issue with the angle of force application (sheer force).

I understand why the left mouse button is longer than the right mouse button -- a logical decision given how much more we use that button; however, this makes hand placement forced because there isn’t much of an ergonomic groove on the left side.

The back button (M4 / M5 positioning) is also awkwardly placed. Because the left mouse button is longer than the right one, I naturally move my hand further up the mouse, meaning I have to physically pinch my thumb back just to touch the back button.

The scroll wheel has fairly standard control. It doesn’t move the page down much, but as a side effect, it doesn’t make too much noise. The last thing I want to hear is someone blasting down a web page without considering the ears of anyone around him. A wheel like this is advantageous when playing a first-person shooter because the player requires precise cycling between weapons if he doesn’t use the number keys.

The Gandiva H1L is very lightweight for a gaming mouse, making it a good mouse to port around when going to an event like PAX (could every day be a PAX day?) or MLG. I wish Tesoro included weights as an option to help some players optimize their movements -- especially since I’ve been using a Logitch G500 and Corsair Vengeance M65 -- but most other mice at this price point don't include them. 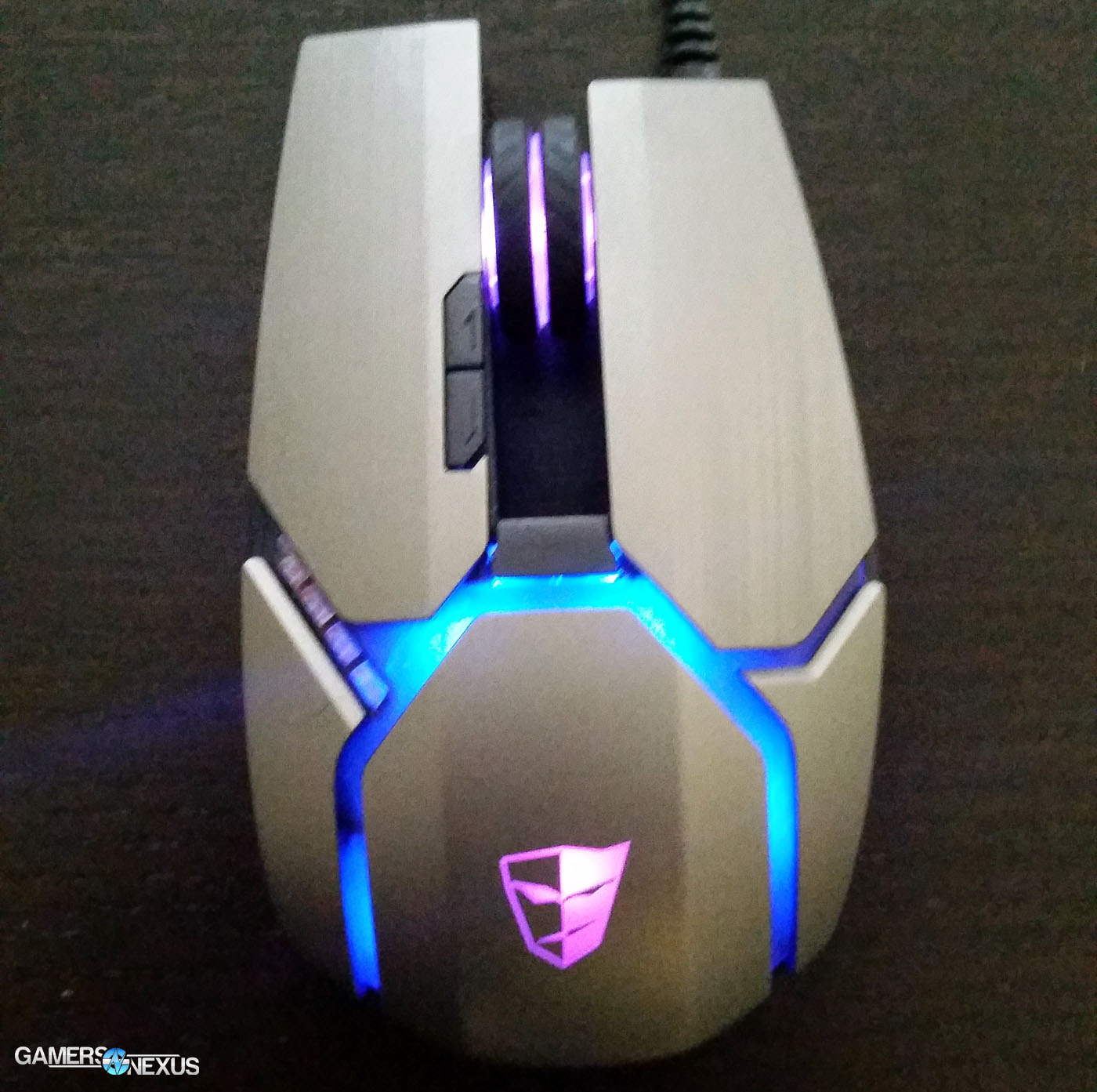 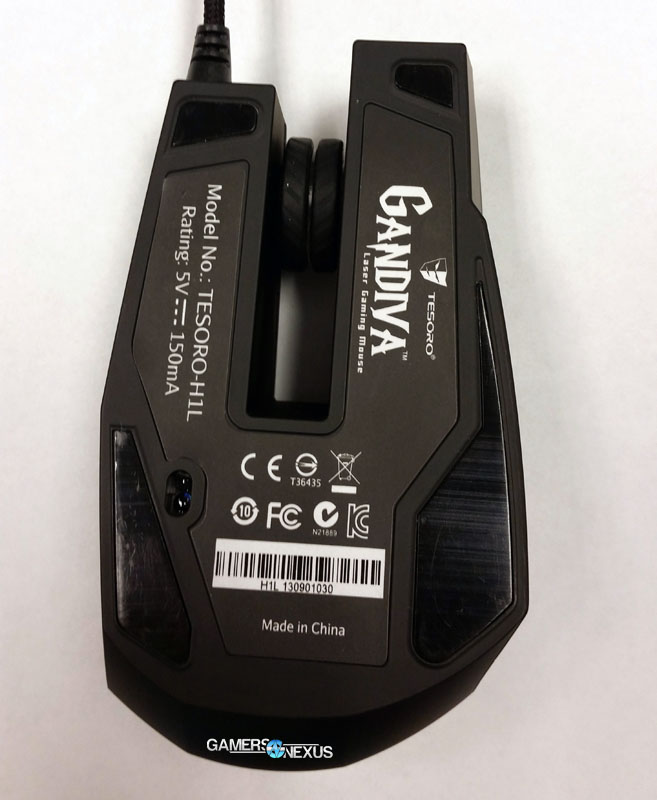 The Gandiva H1L uses the Avago ADNS-9800 sensor. Many of the mice from competing manufacturers use the Avago ADNS-9800, including the Cooler Master CM Storm Mizar, Corsair Vengeance M65 and M95, SteelSeries Sensei, and Tt eSports Level 10 M.

The Avago ADNS-9800 comes in at a speed of 150 Inches per second, meaning the mouse can be moved at that rate until it loses the ability to track accurately. The downside to serious gamers is that it does host mouse acceleration by default. A mouse with acceleration, or mouse smoothing, automatically increases the sensitivity of the mouse the faster a user moves it, but this can be disabled in Windows.

The Gandiva definitely has interesting aesthetics that some gamers will admire. The most unique visual element is the gap between the body and the scroll wheel. This serves no purpose, but I think it stands out as tasteful by design. It helps present the mouse as less clunky.

The default blue LED lighting adds just enough of an accent to the silver hood. It’s not revolutionary, but it’s evident the product engineers knew what would look good. Below the left mouse button are four blue LEDs that indicate the DPI mode selected; when none of the LEDs are illuminated, then the mouse is in its lowest setting, 800dpi. Users can change the color of the mousewheel and logo backlighting with the included software; there are dozens of colors to choose from.

The software features five button mapping sets, often referred to as “gaming profiles.” Users can also create their own Macros to simplify the mechanics of performing routine tasks like slaying low-level creatures in action RPGs or stringing MMORPG abilities.

Under the “Advanced” tab, users can adjust the DPI along the X- and Y-axis for each mapping set. This makes it possible to create a tighter range of sensitivities for particular genres, like FPS.

Another important and welcomed feature is the polling rate meter that essentially dictates the mouse-controlled lag time. Polling rate measures the frequency (in Hz) at which the device sends information to the computer. The four available polling rates are 100, 250, 500, and 1000 Hz, or 1 millisecond. A 1000Hz polling rate means that the mouse will ping the host 1000 times per second.

The lift-off distance setting gauges the maximum distance from the surface that the mouse can be lifted until the sensor stops tracking user movement.

There is also a meter for shooting speed. We didn’t find any information other than what’s on Tesoro’s site, which states: “a tool for FPS fans to fine-tune the shooting speed and ensure optimal click rates.” I tested out the shooting speed in a couple of games, including Blacklight Retribution and Metro 2033, and didn’t notice any difference. We are unsure of the legality of such a feature in VAC or Punkbuster.

The Gandiva H1L’s software packs in several capabilities that will improve gaming experiences for a few genres. The major downside is that applying the changes takes a long time -- sometimes over 30 seconds. It would also be fun to change the backlighting on the mouse’s body instead of just leaving it blue the whole time. 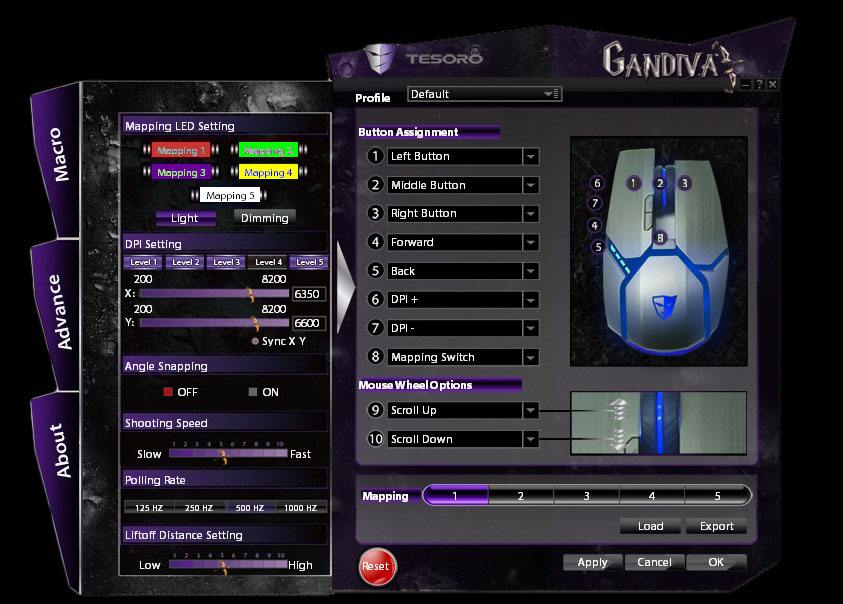 At $60, The mid-level Tesoro Gandiva H1L has has just enough features and aesthetics to satisfy consumers. It offers many customization options through its software, overall helping alter the performance based on the specific user settings.

That said, its poor ergonomics make it a fatiguing peripheral. The placement of the forward & back buttons (M4 / M5, commonly used for VoIP), coupled with the extra force (and occasional friction) needed to execute successful clicks, hinders using this mouse for click-intensive activities like gaming. Additionally, Tesoro is still very hard to find in North America; it isn’t available at major retailers and etailers from what we can see.

Users who prefer a heavier build and more ergonomic features, such as a more defined mouse arch and a rubberized thumb groove, would perhaps be better off going with a Corsair Vengeance M65 or M95, Logitch G402, or Cooler Master CM Storm Havoc. Most of these mice in this class offer a similar feature set of programmable buttons and customizable gaming profiles, too.