As with both preceding Maxwell processors, the count-for-count specifications of the GTX 960 are deceptively low. The GTX 960 hosts a single GM206 GPU, equipped with 8 Streaming Multiprocessors to net a total of 1024 CUDA Cores. It's important to note that cross-architecture comparisons of core count aren't linear, as the Maxwell CUDA cores are roughly 1.4x more powerful than Kepler cores. We'll get into this momentarily.

Looking at the rest of the specs, the GTX 960 ships strictly in a 2GB model using a 128-bit bus, which makes use of heavy color compression to reduce saturation of the memory bandwidth (which is 112.16GB/s). The effective speed of the memory is 9300MHz due to these efficiency gains, operating a memory clock of 7010MHz natively.

Continuing the joint trend by all semiconductor manufacturers, the GTX 960 has dropped its TDP to just 120W, a marked decrease over the GTX 760's 170W power requirement. As a result of the low TDP, the GTX 960 can be powered by a single 6-pin PCI-e connector and the PCI-e slot alone. Notably, some board partners will be manufacturing overclocking-targeted GTX 960s with additional power headers for increased OC overhead.

NVidia still rests on 28nm fabrication process and likely will not change that for the remainder of this GeForce generation. 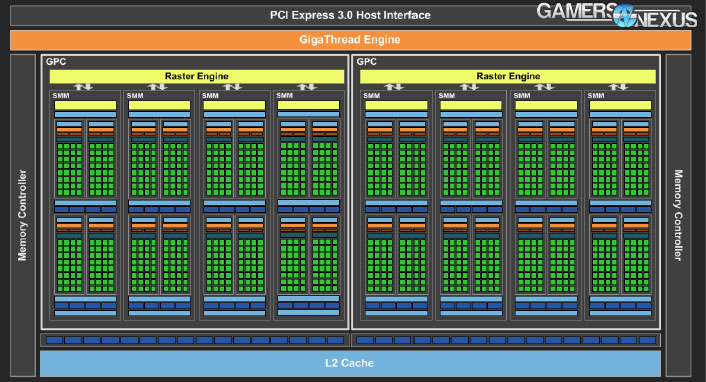 The GM206 hosts almost all of the same architectural features introduced in the GM204 GTX 980 GPU, to include delta color correction and per-core efficiency gains, but makes a few key changes.

As with all Maxwell GPUs, the SMM is broken into four blocks. Each block possesses 32 CUDA cores, making for a total of 128 cores per streaming multiprocessor (there are eight in the 960). Each SMM hosts 96KB of shared memory, then combines the L1 texture caching functionality into a 24KB memory pool (one pool shared between two CUDA blocks, or 64 cores). For comparison, Kepler's GPUs hosted a 64KB pool that was also shared with L1 cache.

Among other changes that will be discussed shortly, these key modifications to Maxwell over Kepler contributed to a 40% performance-per-core increase, ultimately netting a 2x performance-per-watt gain. 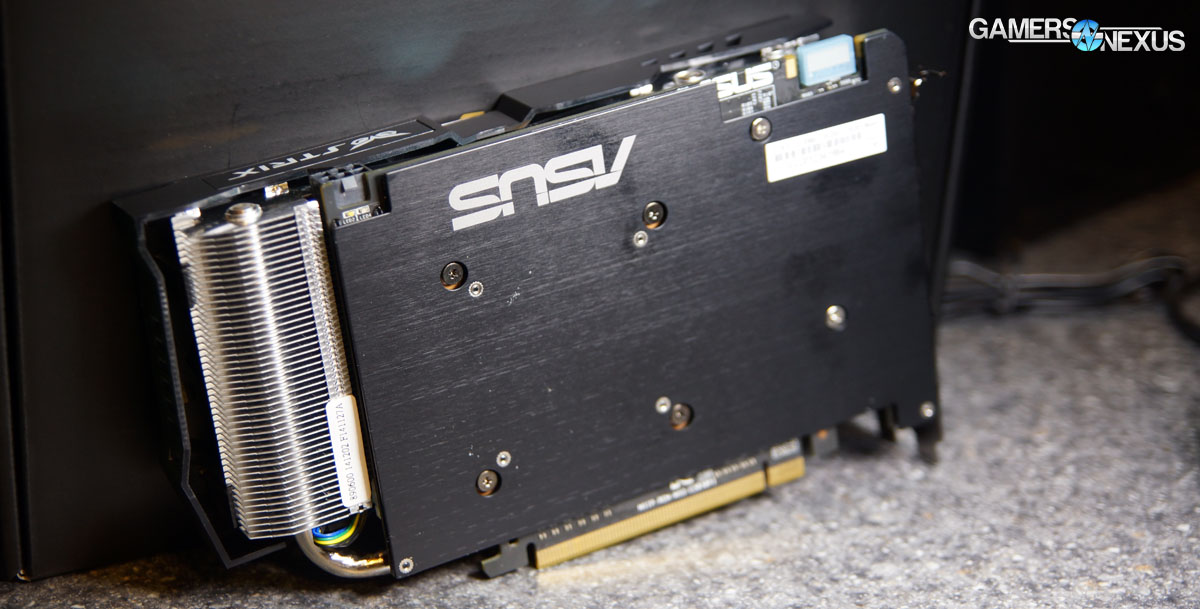 I said there were new features in GM206 that were not found in GM204, though. The most noteworthy addition to GM206 and the GTX 960 is a new video engine, now capable of full H.265 HEVC (encoding & decoding), whereas the GTX 980 could only encode. We previously wrote that H.265 had finally been approved by the ITU. H.265 encoding (all our videos are encoded in H.264) will substantially decrease bandwidth requirements, allowing content creators to pack more data into a smaller file, allowing for less abusive data streams. This becomes critical as the world moves toward higher resolution output, which further increases demand for high bit-rate media (the bit-rate must increase in step with resolution to prevent a drop in overall quality).

The GTX 960's H.265 decoding support means better support for high-quality media going forward, although we think this is still somewhat far off; 4K & 5K are still buzzwords at this point, and media produced for the standards is rare. Buying a GPU strictly on the expectation that media (and then H.265-encoded media, still effectively non-existent) will soon be produced en masse seems a bit of a stretch, though it has plenty of other merits.

Aside from this change, it's important to note that the GM206 uses the same memory subsystem to what the GM204 and GTX 980 featured. As discussed in page two of our 980 review, third-generation delta color compression (example below) looks at individual object color delta temporally (from one frame to the next, or over time). Once analyzed, the delta (difference between the previous color and the new one) is calculated, rather than performing absolute calculations for every color on the screen; this also prevents colors that remained the same from being reacquired. Overall, this memory subsystem results in roughly 25% fewer bytes per frame vs. Kepler. The key note here is that a 128-bit memory interface – when looked at in real-world gaming applications – is capable of outperforming the GK106's 192-bit memory interface.

Although it was written about in our GTX 980 review and at Game24, nVidia's more bandwidth-efficient MFAA (multi-frame sampled anti-aliasing) hasn't actually made it into many games. The launch of the GTX 960 comes shortly after expanded MFAA support by games, to include Dragon Age: Inquisition, ARMA III, Far Cry 4, and others. In testing, MFAA improves performance on mid-range hardware (like the GTX 960) somewhat substantially without producing a noticeable quality decrease. 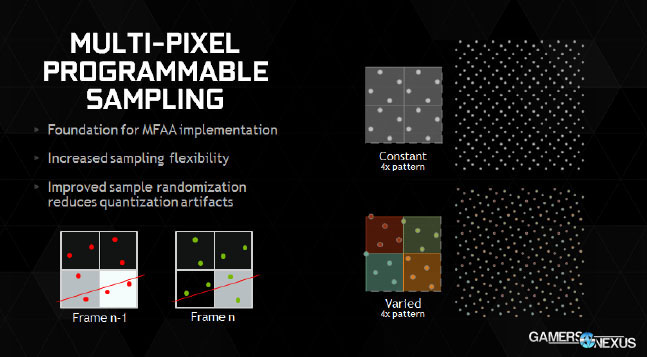 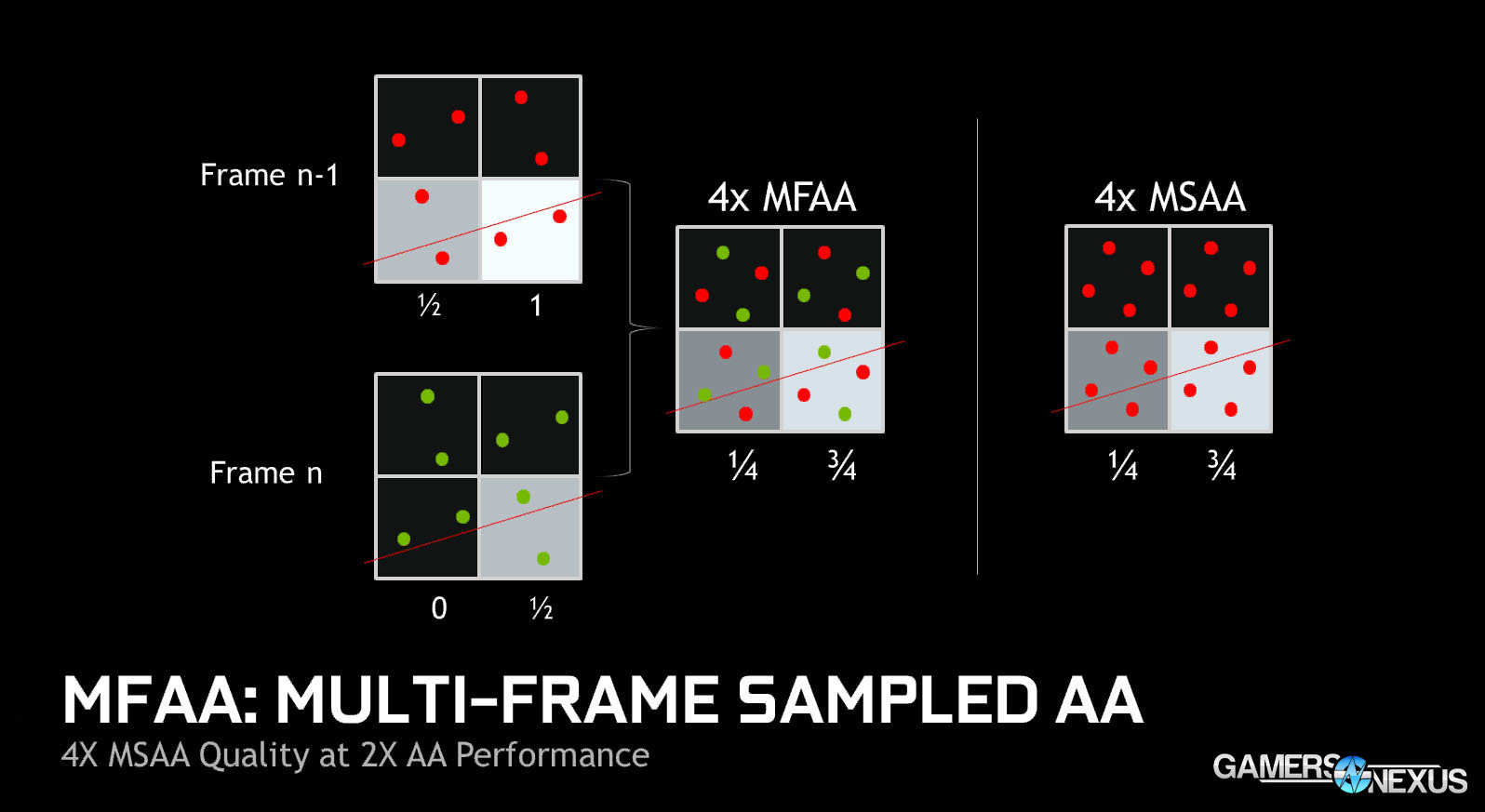 MFAA operates temporally, taking pixel samples from the previous frame and the impending frame, then combining them to determine the best pixel color (improving smoothness, as all anti-aliasing technologies do). This means the workload is split over a period of two frames, rather than loading the GPU heavily on a single frame basis.

Let's get to the GTX 960 benchmarks. Continue on to Page 2 for the charts.