HyperX's cloud doesn't boast DTS headphone X or Dolby Surround as some other headsets do, but instead uses a custom DSP to virtualize 7.1 channels in surround. The real-world use case of this technology is best demonstrated with an FPS game, where it is critical that the user knows the exact location of enemies. Effective 7.1 channel output will help with diagonal positioning (up and left), normal left/right differentiation, and up/down differences. The result is simulation of 7 satellite speakers positioned adjacent to the ears. Note that not all games are natively compatible with true 7.1ch output, especially older ones (CSS, CoD4).

Virtual positioning of output within a set of two (stereo) drivers is common within the world of headsets. Very few offer multiple physical drivers – Tesoro is one of the remaining companies attempting this – and most have moved to using higher-end processing to simulate multi-channel output. The general consensus is that virtualized audio allows a larger, higher-quality single driver in the ear-cup and will ultimately produce similar positional audio. This also reduces the bill of materials by limiting supply to a single driver per cup, ultimately allowing a smaller and more practical / portable pair of headphones.

First, a note: Headphones and speakers are finely-tuned to specific tasks, if they're going to be good at anything at all. Headphones built for gaming will generally not be the best option for listening to music; conversely, AudioTechnica headphones will be better with music than with specialized gaming audio. Depending on the company behind the audio – Turtle Beach is a great example, and I suspect HyperX will soon be – frequencies may be fine-tuned to amplify specific sounds experienced during gameplay. Such sounds would include footsteps and gunfire, which occur at known frequencies and can be optimized for more user-detectable output. RPG sound examples might be eerie dungeon noises and bassier booms (growls) for a game like Skyrim, all of which can be tweaked by audio engineers for a better gaming experience.

When drivers are optimized for this type of output, the obvious side-effect is that music won't sound as good. This remains true even when software drivers include somewhat gimmicky “gaming” and “music” modes, as the GameCom 788 does. The fact of the matter is that no amount of modern-day software can convert a gaming-targeted device into something that competes in music output with specialized monitor headphones.

To that end, the Cloud II is a gaming headset first-and-foremost. As with any pair of headphones, you can still listen to music, you just won't want to use the 7.1 DSP for this task.

Disclaimers aside, the audio output quality of the Cloud II is generally superb. We tested the Cloud II with Skyrim (sound mods added), CS: GO, and Battlefield, theoretically producing a fairly widespread soundscape.

In FPS games, the 7.1ch audio is capable of reproducing sound sources on X & Y axes with great accuracy. At first, the 7.1ch DSP will primarily feel louder than the stereo setup, but careful observation reveals that the sound is “fuller” in the earcup with all channels firing. I had no difficulty pinpointing my enemies in CSGO. The stock stereo output is still pretty solid, but you lose on the depth and verticality of positioning, and there's really not any reason to use the headset in gaming without the DSP.

As good as the DSP was at positional virtualization, the gunshots almost feel too crisp at times and can be irritating – almost as if they're peaking on a limiter, but I'm not enough of an audio expert to determine the exact issue and its cause. To the same end, it is my opinion that the headset should allow slightly more powerful output to the less active channels when outputting heavily on one channel. This complaint is primarily materialized in role-playing games that demand immersion. For example, imagine Skyrim's Alduin roaring draconically from your right (right earcup). This roar is almost too overpowering when compared to audio output in the left earcup; the two should not be perfectly equal (then there's no point in complex channeling), but shouldn't soften the less active channels to the point that the Cloud II does.

We found the soundstage of the Cloud II to feel a bit claustrophobic at times, generally outputting audio closer to the ear than we'd like in some instances. To this end, it was sometimes less easy to locate sources of audio positioned on the Z axis (depth). It was still fairly easy to locate enemies, but this is a point of improvement for the next iteration.

Ultimately, the 7.1ch audio is a tremendous step forward for HyperX's ventures into the audio world. We're impressed with Kingston's ability to source and engineer a quality audio device, given the company's roots in memory manufacturing. The audio quality – complaints above aside – is generally superior to most headsets we've tested (Carcharias included) and trades blows with the reigning GameCom 788. Gunfire is crisp and locatable, RPG-like sounds are ominous where necessary, and the positional audio has promise for future iterations.

Kingston shows its limited audio experience by way of the microphone. Although the modular mic design makes for an ideal traveling companion, the microphone itself offers poor output quality with slight, constant background static and a muddy voice quality. It's usable for the likes of gaming, but would make for a poor choice in the quality-intensive world of game streaming and content creation.

The microphone is also picky in its positioning, demanding invasive proximity to the user's mouth for audible pickup. This remains true even with the spit-guard foam removed.

For users solely relying upon a microphone for the occasional CSGO session, I'd say table this complaint. When you begin playing competitively with great regularity and/or have high demand for quality audio output (but want a single-device solution) in streaming use cases, we'd strongly recommend considering the GameCom 788 or a higher-end SteelSeries solution, like the Siberia Elite. SteelSeries uniquely offers an aftermarket condenser microphone as an accessory for some of its modular mic headsets, something I think HyperX should replicate in the future. This affords streamers the option of a higher-quality, separately-purchased input device without fronting the cost to consumers who may be disinterested in such an option.

Where HyperX really does right is its comfort and portability. The Cloud has become my go-to travel headset when hopping from convention to convention, as it's shipped with a padded travel bag and offers insulation against plane background noise. It also makes for a portable, high-quality video editing headset when we're on the show floor of events. To that end, I'd imagine LAN gamers could appreciate the Cloud II.

The leatherette earcups are soft and offer noticeable sound insulation against outside noise. These can get a bit warm for extended uses on people who tend to run a bit hotter, in which case the memory foam cushions make for a perfect alternative. The memory foam earcups won't insulate the user as well as leatherette, but the trade-off is a cooler fit that allows the user to still hear outside noises.

I hope to see HyperX build headsets that have rotating earcups in the future (for resting on the shoulders – which fits in with the travel advantages), but that is likely limited by QPad and other partners for the current generation. 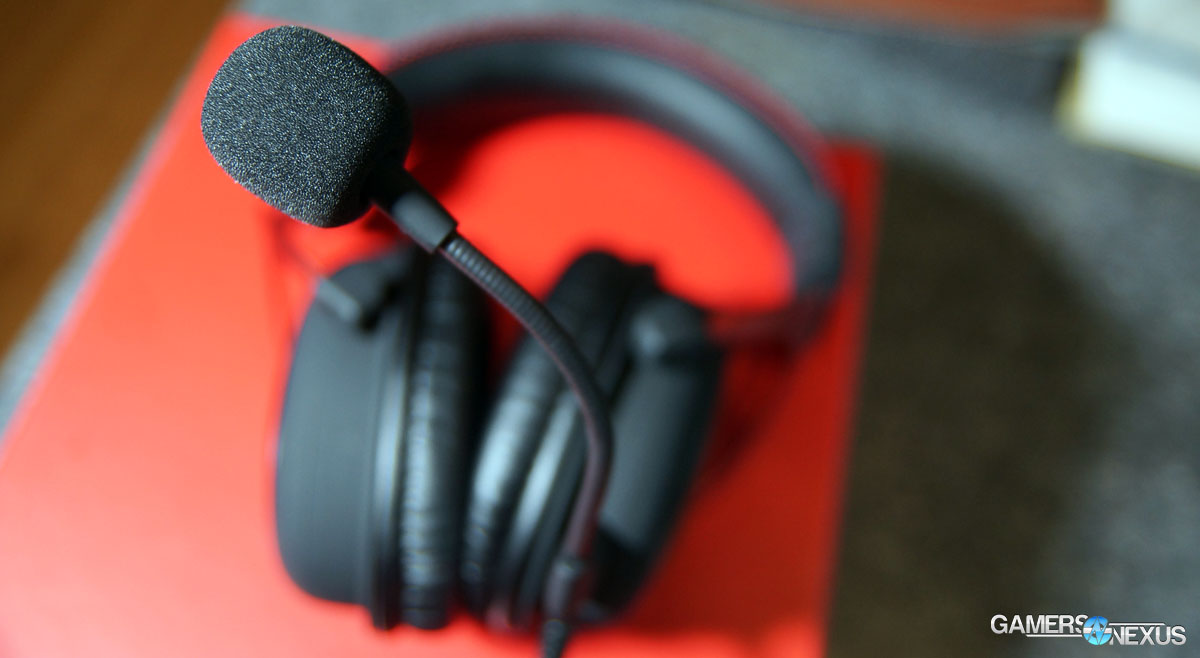 The HyperX Cloud II gaming headset is a frontrunner in portability for gaming audio, and can be confidently transported with the included padded bag. The sound insulation afforded by leatherette earcups makes for excellent avoidance of the outside world, but included memory foam alternatives grant usability in environments that are hotter or demand the ability to hear outside conversation.

Kingston's venture into DSPs with its 7.1ch in-line box is promising and usable thus far, but needs improvement in a few key areas (better distribution of audio to the channels). We prefer the Cloud II for positional audio in competitive games over the long-standing GameCom 788 champion, though the 788 has its own advantages – primarily the microphone, which is substantially higher quality.

HyperX shows strong branding power and dedication to aesthetics with its Cloud headsets, something that will shine in LAN environments.

We wish the Cloud II had better microphone quality and think that it has room to grow with the DSP, but are overall pleased with the direction.

In general, the feelings can be summed up pretty simply: For highly-accurate positional audio in a competitive (CSGO, CoD) environment, consider opting for the Cloud II at roughly $80. For higher quality microphone output with still-high quality positional audio, get the GameCom 788. You lose out on portability and versatility with the 788 (isn't compatible with phones or non-PC platforms), but if you're just PC gaming, it's a cheaper and more cost-effective option. For users who'd like a pair of headphones they can plug into phones for music and then plug into PCs for gaming, the Cloud II is an easy choice.