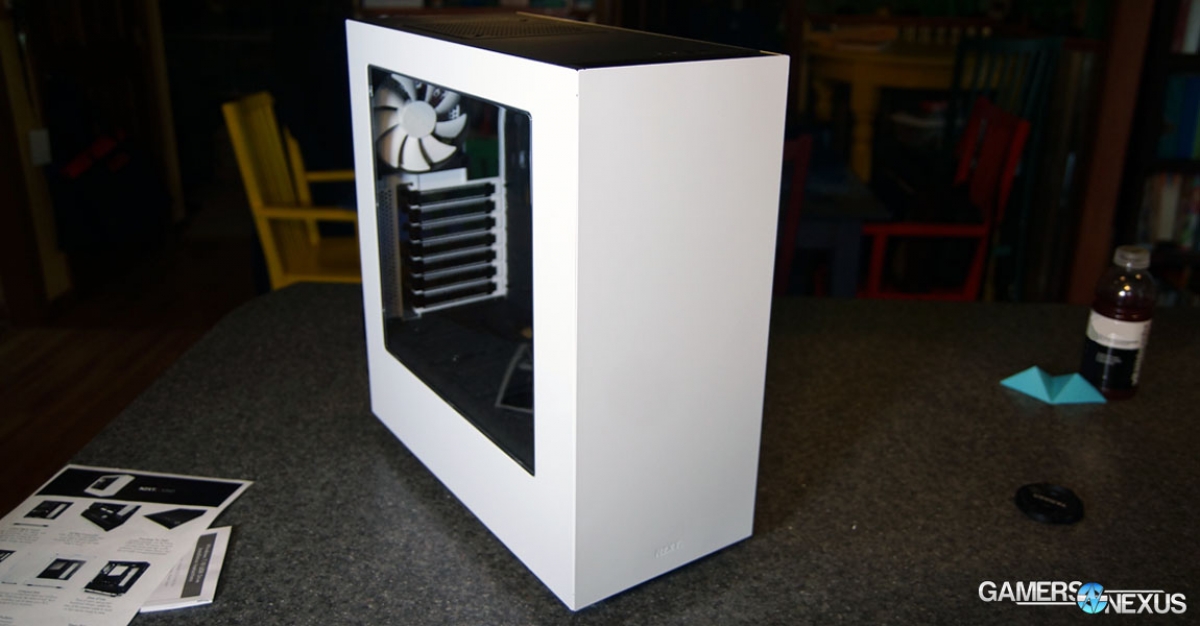 We previously awarded NZXT's H440 an Editor's Choice Award, and it looks like its budget-priced cousin – the S340 ($70) – is pretty respectable in its own ways. The S340 is a minimalistic case designed to keep costs low without sacrificing quality; it’s plain, it’s neat, and it gets the job done efficiently.

Let’s get the obvious point out of the way first—no, the S340 does not include any 5.25” bays. NZXT made this choice previously in the H440, and it’s a good one: the vast majority of people, even gamers, no longer need an optical drive installed in their PC, and it’s silly to waste so much space on drive bays that will (literally) just collect dust. That said, if you really feel the need for an internal optical drive, it’s time to look at a different case.

What the S340 does have is a discretion-enabling PSU shroud, which hides-away both the PSU and the 3.5” HDD bays (as well as a big pile of wires, if you happen to be a bit lazy with cable management). The drive-assigned “+1” in the specs list refers to the fact that there is a third, versatile drive bay under the two normal 3.5” HDD bays, able to hold either 3.5” or 2.5” drives. There’s no reason that HDDs should get in the way of airflow, and it’s nice to have them tucked into a corner where they aren’t visible. On top of the shroud rests two SSD trays, which are much more visible than their 3.5” counterparts (more on that later). No matter where you choose to install your SSD(s), though, they should be close enough to the HDD(s) to share a power cable. For this aspect, we tip our hats to NZXT.

Cable management is a priority. There are plenty of spaces provided to route cables of any size at any location, but the spaces are hidden enough to maintain a clean look. Zip tie points are everywhere, and there’s a large (removable) metal bar to the right of the motherboard to secure and hide the motherboard power cable, or whatever else you choose to put in that space. There’s a fair amount of cable management space behind the motherboard as well, but most cables can be directed through the PSU shroud and then up behind the metal bar, where there’s more clearance. 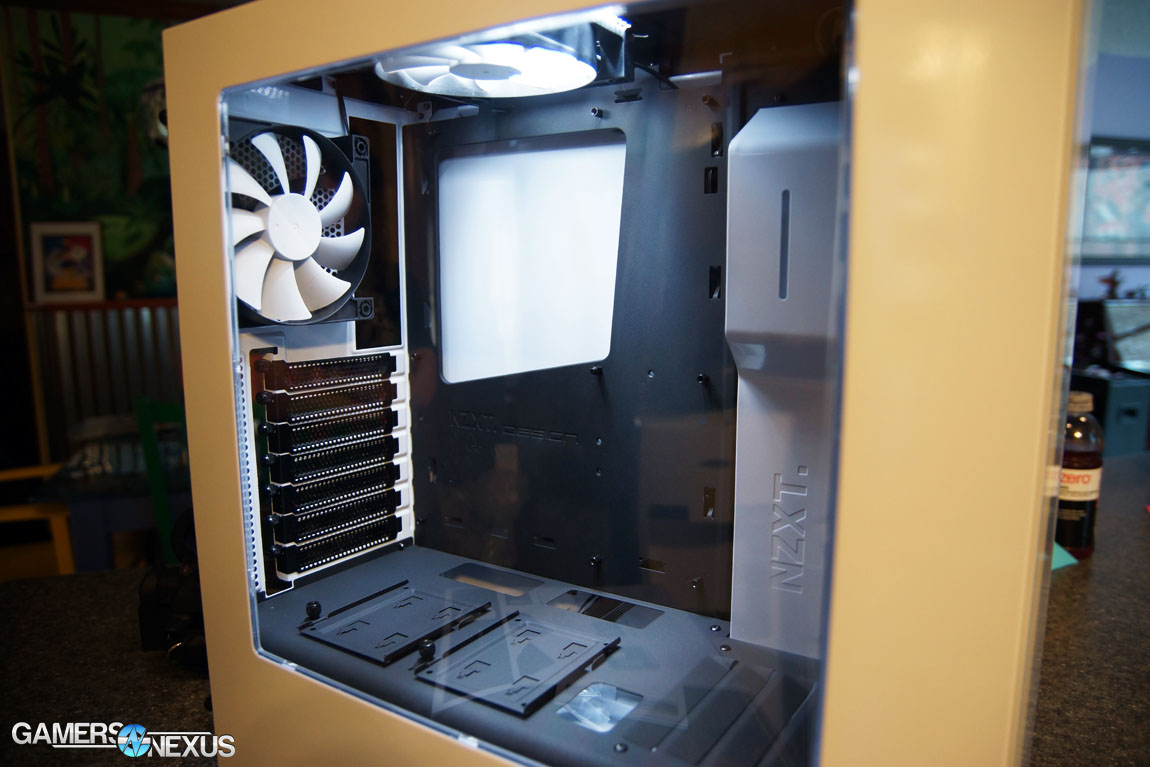 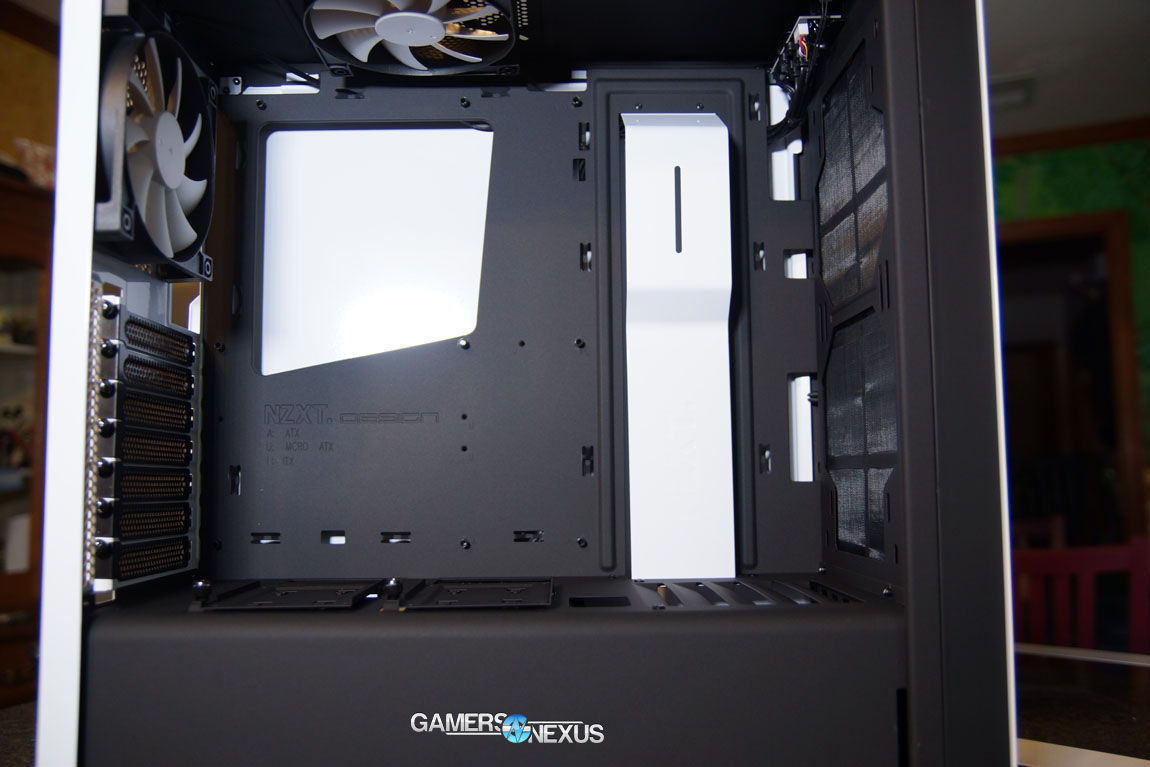 Installation of parts is easy, as long as they’re within the specified clearance. The top and rear fans can (and should) be removed prior to assembly to free up workspace—our large Be Quiet! cooler used in this build was the difficult to work with, but there was just enough space above it to allow working with fan and power cables. Expansion cards are screwed in on the exterior of the case, and NZXT provides nice, big thumbscrews for that purpose. At the bottom of the case, the PSU is held in with a removable metal frame; this allows the PSU shroud to fit as snugly as possible, since the PSU is slid into the back of the case rather than installed from the side. The PSU must be installed fan-down, which hopefully will prevent some potentially embarrassing mistakes. We noticed that all of the screws were torqued almost exactly to a tool-less install spec, so screwdrivers didn't need to be broken out aside from motherboard mounting and fan re-installation.

The S340 ships with two impressively quiet 120mm fans, which can be upgraded to 140mm if so desired. There are also spaces for an additional two 120 or 140mm fans in the front, or a radiator for liquid cooling. These front spaces are covered by a large removable filter held in with magnets, and there’s a smaller filter clipped to the bottom to prevent dust from being sucked off the floor. Four tall, plastic legs hold the case a fair distance above the ground, and their rubber feet grip extremely well.

Airflow isn’t anything out of the ordinary, but it’s adequate for basic cooling. Air enters via the front, blows over the CPU and GPU, and is pushed out at the top-rear of the case. There’s no direct cooling of the PSU shroud, since the PSU has its own fans, but there are vents above the 3.5” drive bays for moderate ventilation. The large steel and plastic sheet attached to the front of the case does a good job of obscuring the front fans or radiator. The S340 has more limited airflow than competing, similarly-priced Corsair cases, but the S340 sets out with different goals – it hopes to be more silent and discrete, whereas Corsair tends to focus on performance.

The S340 comes in black, white, black/blue, and black/red. The interior of the case will probably be clear of clutter, thanks to the space made for cable management, and it can be viewed through a large, square acrylic window on the side. The great thing about not having any drive bays in the front is that the window can cover the whole side of the case without any risk of ruining the look, something that NZXT has taken advantage of. There’s a small NZXT logo stamped into the front, but other than that, there are no significant decorations built into the case; it’s designed for minimalistic appearances and ease-of-installation functionality.

A Note on Our Thermal, Noise, & Other Benchmarks

We are currently revising our entire test methodology for cases, ensuring loose ends are tied-up and case tests are as consistent and reliable as possible. Case thermal and acoustic testing has massive room for test error, and we're working hard at closing those gaps where possible. In the meantime, case reviews will not include thermal tests. We will revisit the S340 in short order with thermal and acoustic testing, alongside several other cases. 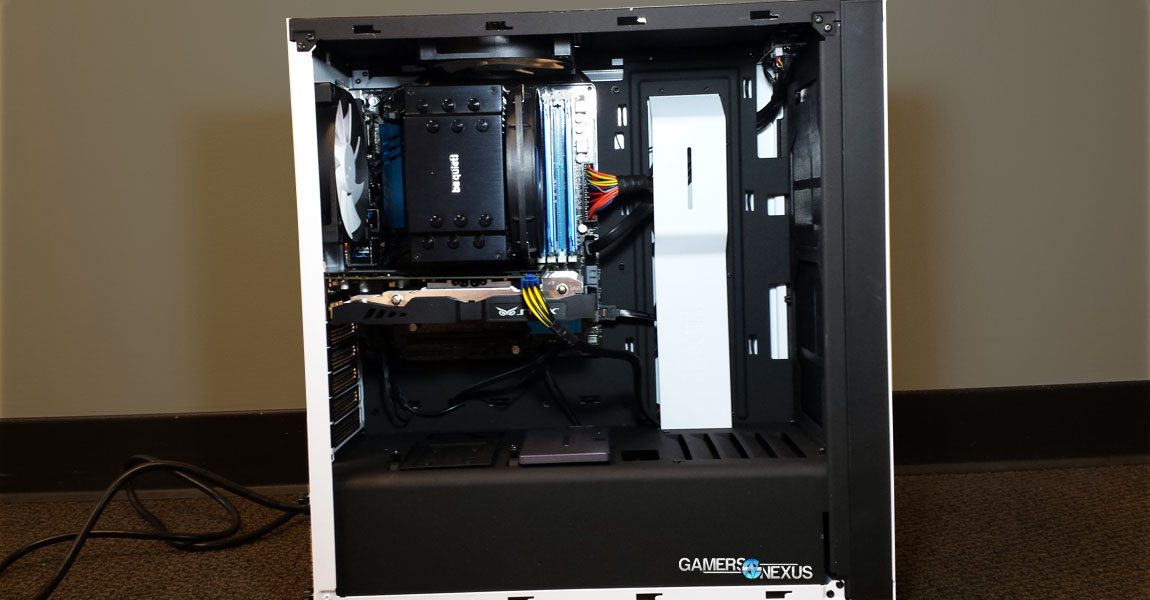 I had some issues with the S340 as I was assembling my system, but very few.

First, the front I/O panel was very slightly out of place, making it difficult to use one of the USB ports—five seconds with a screwdriver fixed that, though it is a QC concern. The screws and standoffs included with the case were either tooled or torqued incorrectly, disallowing easy installation in some cases. Replacing these with our own standoffs resolved the issue. Some users may experience limitations with radiator installation, depending on component selection: There’s space for a single radiator with 58mm of clearance, which should be enough for normal use, but will be limiting for larger radiators from some manufacturers.

I was a little put off by the SSD trays being stuck out in the open on top of the PSU shroud (with a single screw apiece), but the 2.5”-compatible slot in the PSU shroud took care of that. Unlike the previous concerns, the SSD tray exposure is one of a subjective nature; some builders may want to expose SSD branding top-side, making this a welcomed item.

Remaining on the aesthetics side, some builders might notice the lack of rubber grommets for cable management – this didn’t strike me as much of a problem, given the number of small holes provided to route cables through – but could be an aesthetic miss.

The bottom dust filter is clipped-in loosely rather than held in with magnets, but there shouldn’t ever be a reason that the bottom of the case would be visible or that the filter would get pulled out, other than intentionally in order to clean it. The entire case is constructed of heavy, durable steel, which is great for anyone who doesn’t plan to move their tower around too regularly. The only other option is aluminum, which would immediately price the case out of its current market. NZXT has managed to ditch plastic almost everywhere on this case.

The minimalist approach isn’t for everyone, and the S340 isn’t especially exciting to look at on its own. A glossy finish ensures the enclosure lacks a certain depth that a matte finish would provide, but also cheapens the overall appearance of the case (subjectively). More importantly, the front of the case is limited to two USB slots and audio in/out; there’s no way that you can add anything to the front of the case – it’s just a sheet of steel. Users who want external bays will need to look elsewhere.

The vast majority of these issues can be addressed by remembering that the case is $70; some choices were made to keep costs down, and they were definitely worth it. The S340 remains a great case, especially for its price range, and offers easy system installation with a relatively discreet appearance, sans the gloss. For the lucky builders who aren’t on a budget, though, take a look at our H440 review here.

Cases in a competing price point that should be considered include: