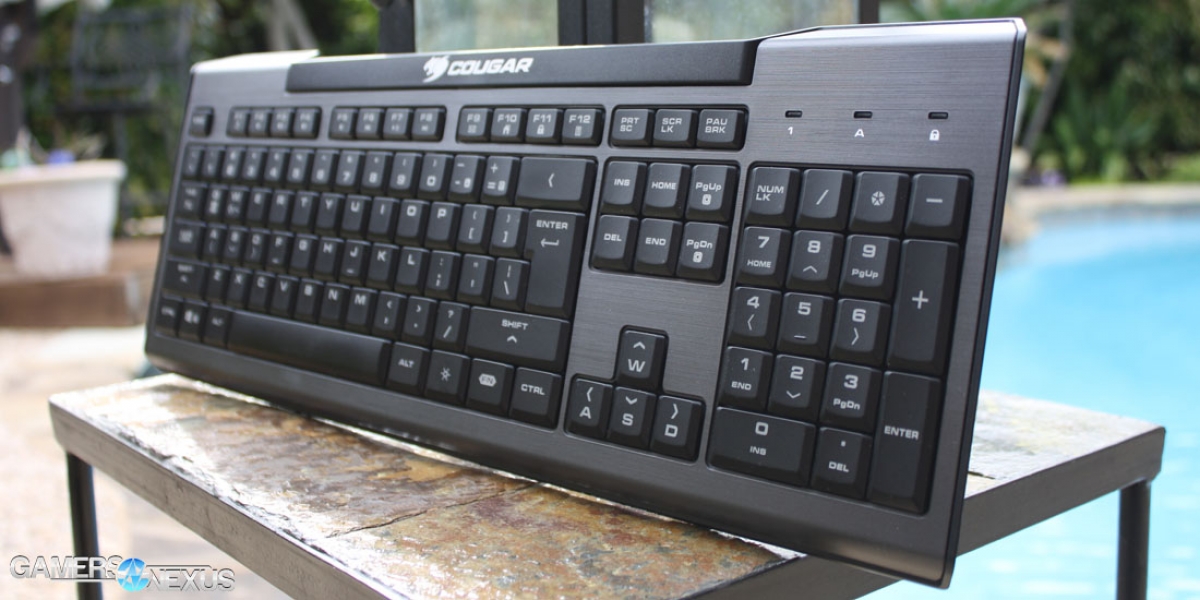 For those unwilling to spend $50+ on a keyboard, options exist in the form of budget-oriented, rubber dome keyboards. The Cougar 200k is one such keyboard, employing scissor switches and setting out with a respectable price-point of $30, promising few large compromises.

Let’s take a quick look over its specs.

The marketing materials detail the use of scissor switches, inclusion of a 7-color backlight (including breathing effect), limited n-key rollover, repeat rate adjustment (1x / 2x), the ability to switch WASD and arrow keys, and other standard features. We can also see the different choices of backlight color: orange, blue, green, purple, teal, yellow, and white are the available backlight colors. 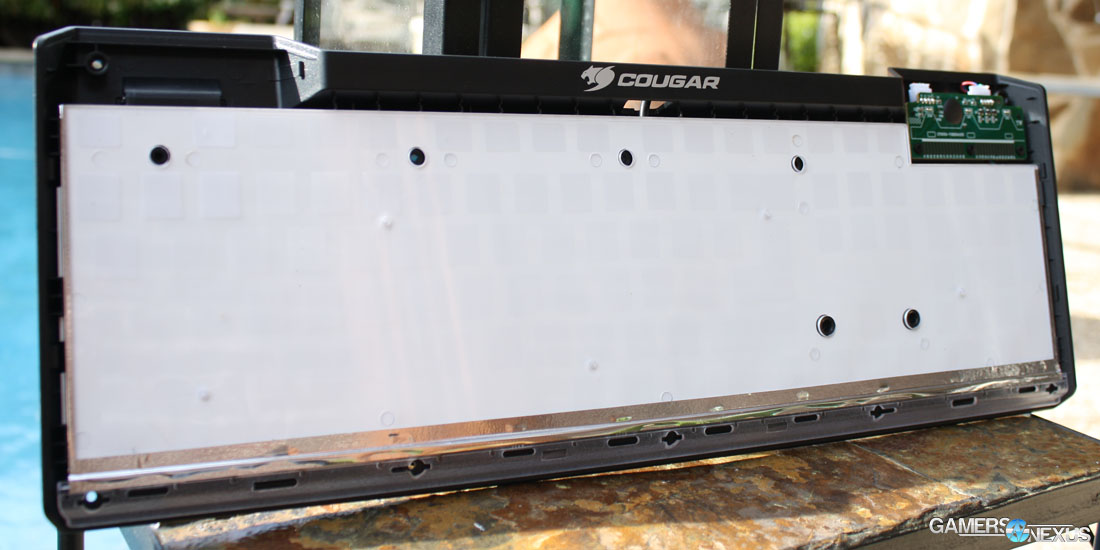 The 200K is easy to dismantle: unscrew all the uncovered screws on the back and the one hidden screw under the bottom-middle foot. There is also one screw hiding underneath one of the elevation feet, so be sure to flip it up and unscrew it when disassembling the 200k

Press the small trapezoid-shaped grey plastic key in, as it helps secure the top grey cover on. Gently go around the sides of the keyboard to pop the housing apart.

To take off the membrane key mechanism board, unscrew the retention screws at the top right that secure the connection between the switches and PCB. 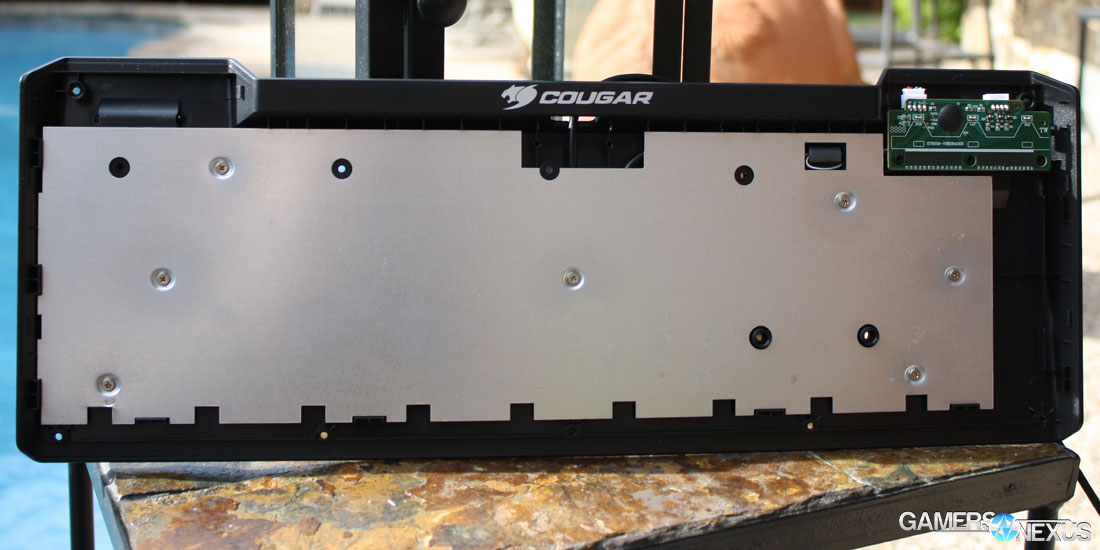 After doing so, we come to the the layer that is primarily for LEDs and scattering the light to create a more even backlight at the front of the keyboard.

Finally, the last layer of the keyboard: Here, we can see a simple steel backplate, which while not as thick as those usually used in mechanical keyboards, still provides rigidity and some heft to the keyboard. These attributes assist in stability when typing. 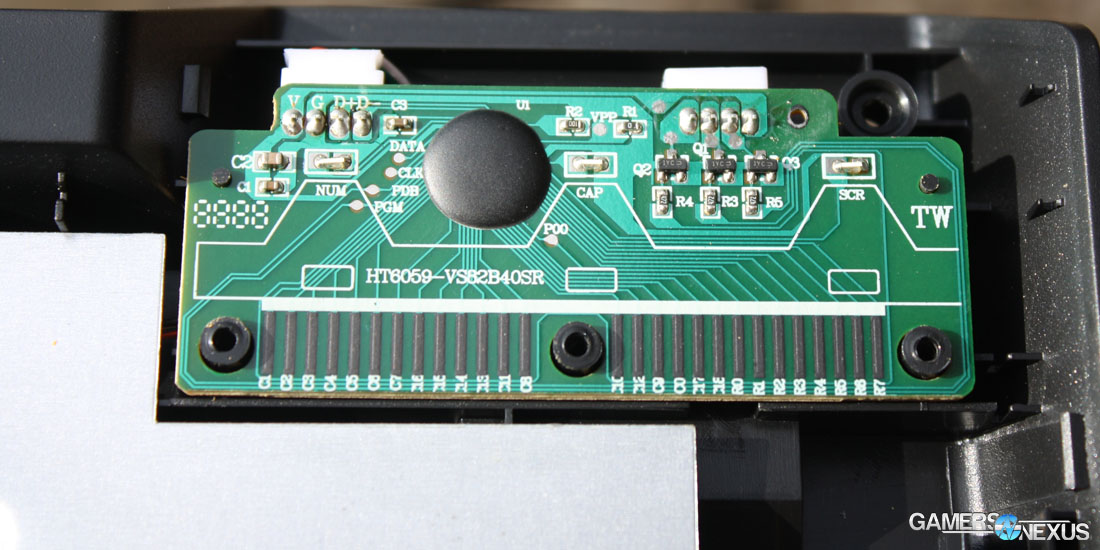 We now see a one-sided (and one-layer) PCB that is the real brain of the keyboard. Here we can see that, for what little soldering there is, it’s done very well.  We can see Cougar opted to use a chip-on-board for the controller, which sadly doesn’t let us know the model of the controller.

The Cougar 200k is largely made out of plastic, but despite that, it feels solid and doesn’t bend or twist as many budget keyboards do. This is likely largely due to the steel backplate used by Cougar.

The build quality of the Cougar 200k, its soldering, and chip-on-board are all done well, which is reassuring and helps establish confidence in Cougar as a brand for keyboards.

The 200k won’t knock any socks off, but it didn’t disappoint me as I feared it would.

The slight contour of the keycaps helps when typing and was a good choice by Cougar. Cougar’s use of ABS plastic keycaps with a clear legend allows the backplate to show through, a unique and sort of fun feature. Only the top of the keycaps are treated (indicating that pad-printing was used), which doesn’t lend itself to longevity. That being said, pad-printed ABS keycaps are widely used so it is less of a disadvantage and more of a normality.

The enter key is large-sized, making replacement more difficult to find; that being said, because this isn’t a Cherry or other standard mechanical board, non-standard key sizes are passable since we can’t replace the keycaps easily. It should also be noted that all of the large keycaps are stabilized with wire bars, so there is very little keycap wobbling, and no matter where the large keys are pressed, they are able to be activated easily.

The Cougar 200k includes a fair amount of features for its price-point. The most prominent is a 7-color backlight. This includes orange, blue, green, a light purple, teal, a yellow that looks more like a yellow-green mix, and a white that seems to be slightly off-white (as though it has a hint of teal in it). Users can either have a static color or enable the breathing mode, which fades from dark to color, to dark, to another color. This can be sped-up or slowed down using the function and “-” or “=” keys. The transitions between colors is very clear, without any obvious lowering of brightness in steps.

There are also 3 levels of brightness (excluding off) for static color mode, each of which can be changed via the function key with the page up and page down keys. The backlight is bright, and the light from it is fairly well dispersed.

When I received the Cougar 200k, I quickly noticed the left side of its backlight would flicker on some colors, and would show blue when it should have shown purple. We contacted Cougar about this issue and received a replacement without issues. To be clear, one keyboard failing QC is not inherently a trend, but it also isn’t encouraging. Luckily, the good build quality and lack of issues with the second Cougar 200k is reassuring.

For gamers, having n-key rollover (or 3+-key rollover) is fairly important; in games, it’s not uncommon to be running diagonally and then to jump or do some other action. This requires that keyboards detect these actions, else gamers be put at a disadvantage due to not actually accepting input when triggered. The Cougar 200k has n-key rollover for keys commonly used for gaming (diagram below), but the rest of the keyboard varies. Most of the keyboard appears to be around 4+ key rollover, but I’ve found that it occasionally drops to 2-key rollover in some small areas, that are luckily keys rarely (if ever) used in gaming. Such keys include m, n, and b. Ultimately, most users likely won’t ever notice problems with key-rollover on the Cougar 200k, but it is something to consider when looking at the 200k. 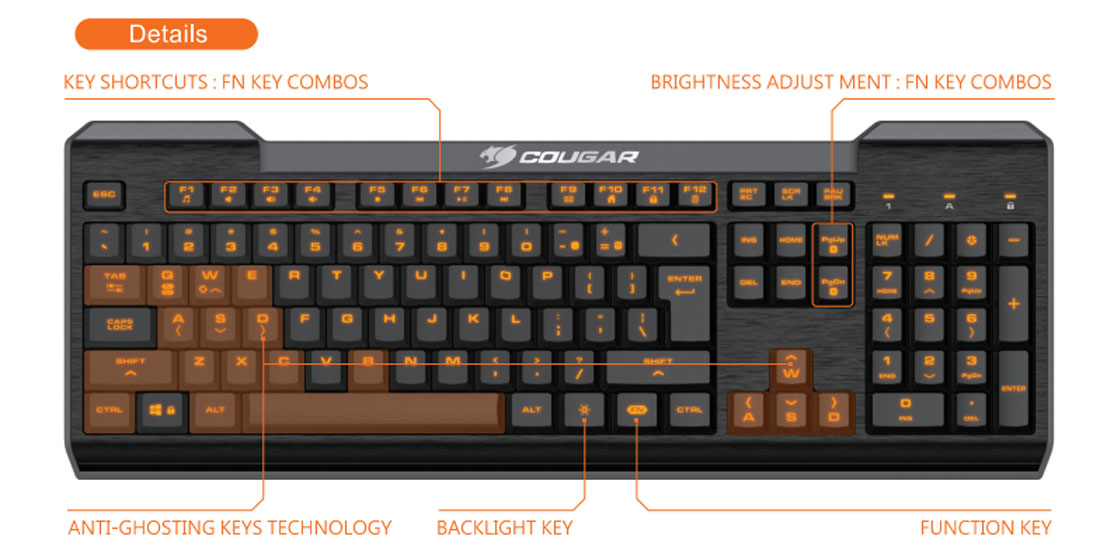 The Cougar 200k also allows for the interchanging of the arrow keys and WASD keys. Quite frankly, this feature is largely useless unless left handed. Left handed users can put their mouse on the left, and not have their hand or the keyboard at an awkward position. I haven’t found myself using this ever, that being said, I’m right-handed and those who are left-handed may find it used more often.

There are also multi-media function layers on the F keys and a toggleable gaming mode that disables the windows key (neither are uncommon). In addition to the normal multimedia keys (volume up/down, skip, pause, etc.), the Cougar 200k uses function keys for the default mail client, internet homepage, calculator, and for locking the keyboard (preventing typing). The lock function still allows for the use of the function and lock key -- that’d be a funny mistake. 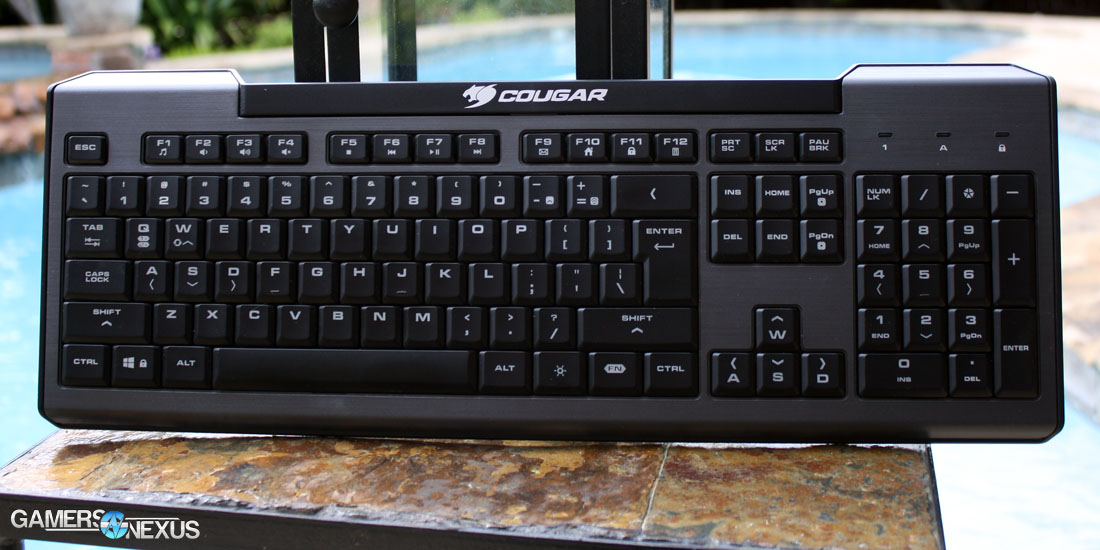 While entirely dependent upon personal opinions, aesthetics of a keyboard are still important. The Cougar 200k shows that Cougar has tried to create a styled, not-overly-flashy keyboard. The use of sharp angles and LEDs help create a “gamer” type of appearance to it, but the gray and black chassis keeps it looking more reserved. The LEDs do look a little flashy, but they toggle, so those who don’t like them need not enable them. Personally, I like how the Cougar 200k looks, as it has style, but doesn't have a “1337 Gam3r” look to it (something I’m not overly fond of), instead opting to be slightly reserved. 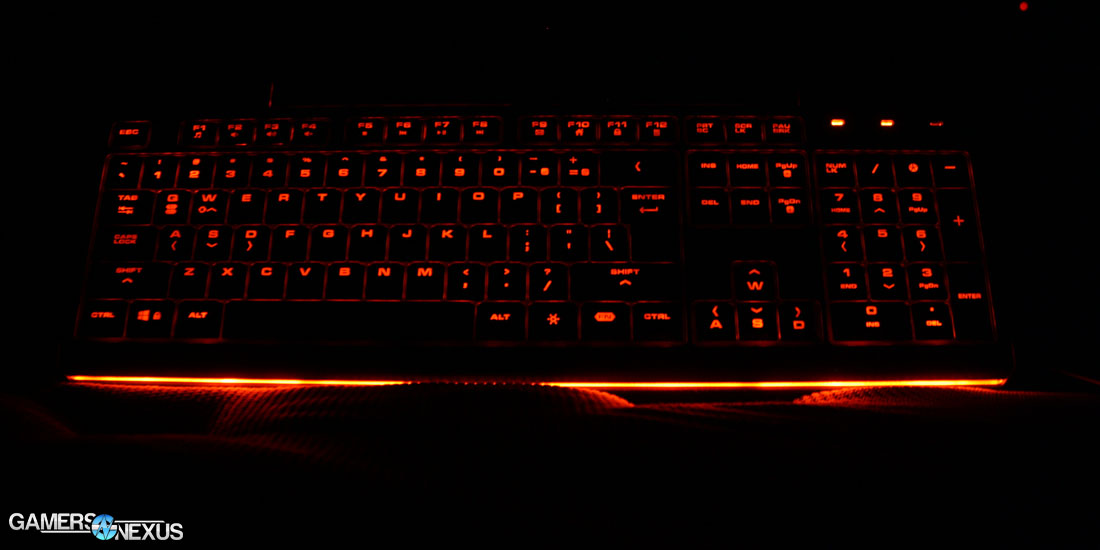 When I originally received the Cougar 200k, I was expecting a low-end, membrane keyboard that I would be disappointed with, since I have become accustomed to higher-end mechanical keyboards. The Cougar 200k then proceeded to pleasantly surprise me, since it feels decent to type on, is fairly feature-rich, has good build quality, and comes in at the reasonable price of $30 on Newegg, and $36 on Amazon.

This leaves the Cougar 200k’s largest competitor being the Thermaltake Challenger Prime at $30. The Thermaltake Challenger Prime features more consistent key rollover and a different type, but the Cougar 200k features partial n-key rollover and more backlight options. So it comes down to style and what you prefer in a keyboard.

Ultimately, the Cougar 200k is a great value keyboard at its price point, and I suggest it for those who are looking for a reasonably priced budget keyboard.